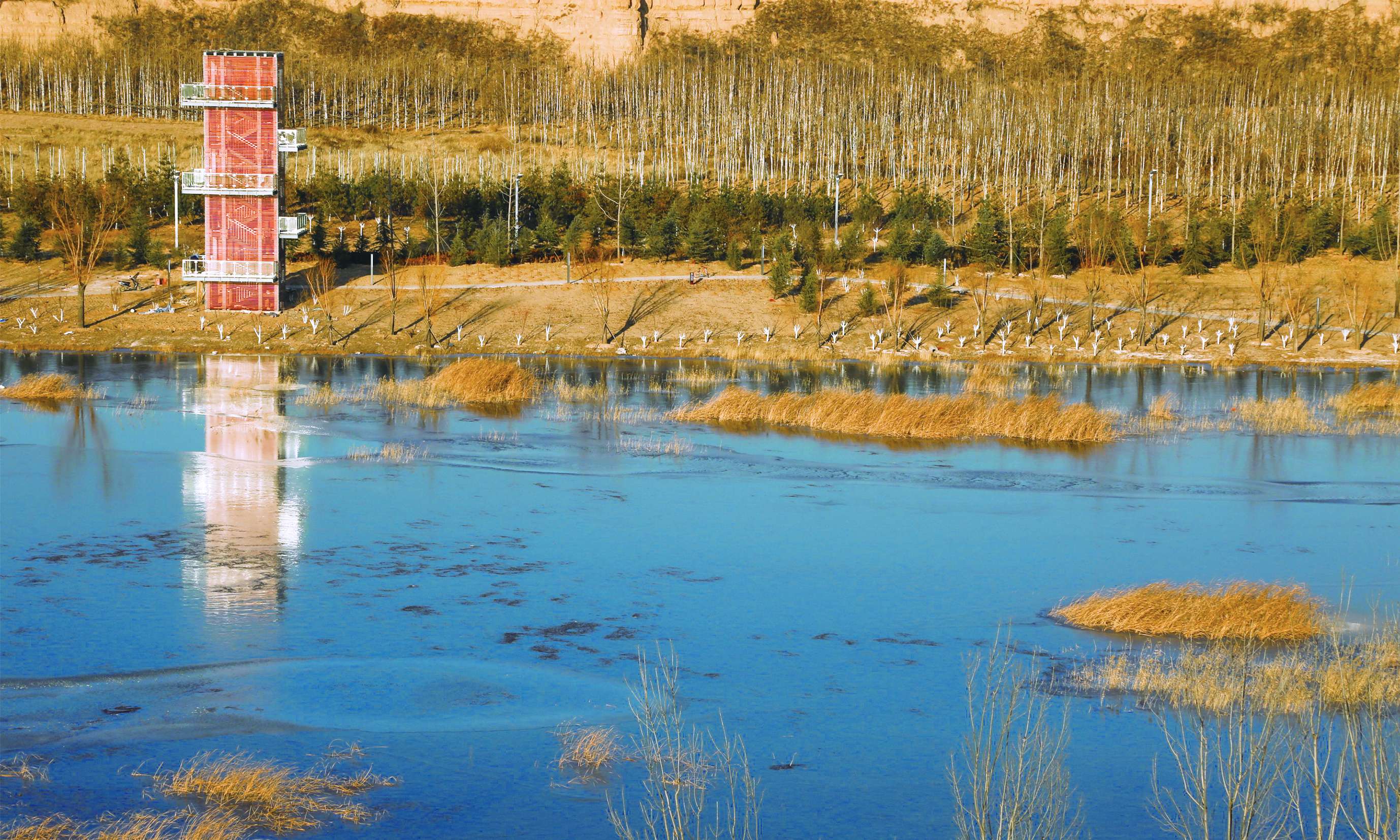 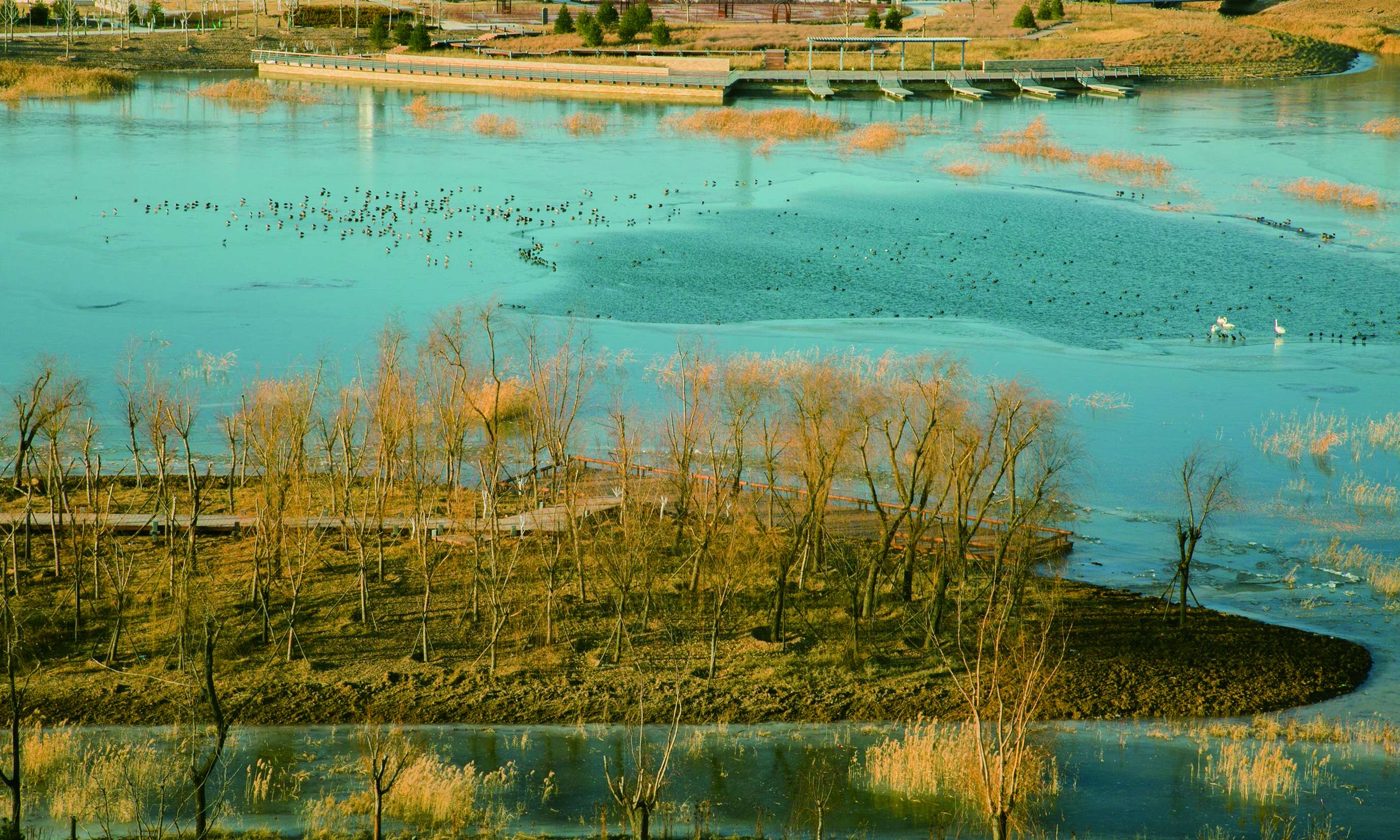 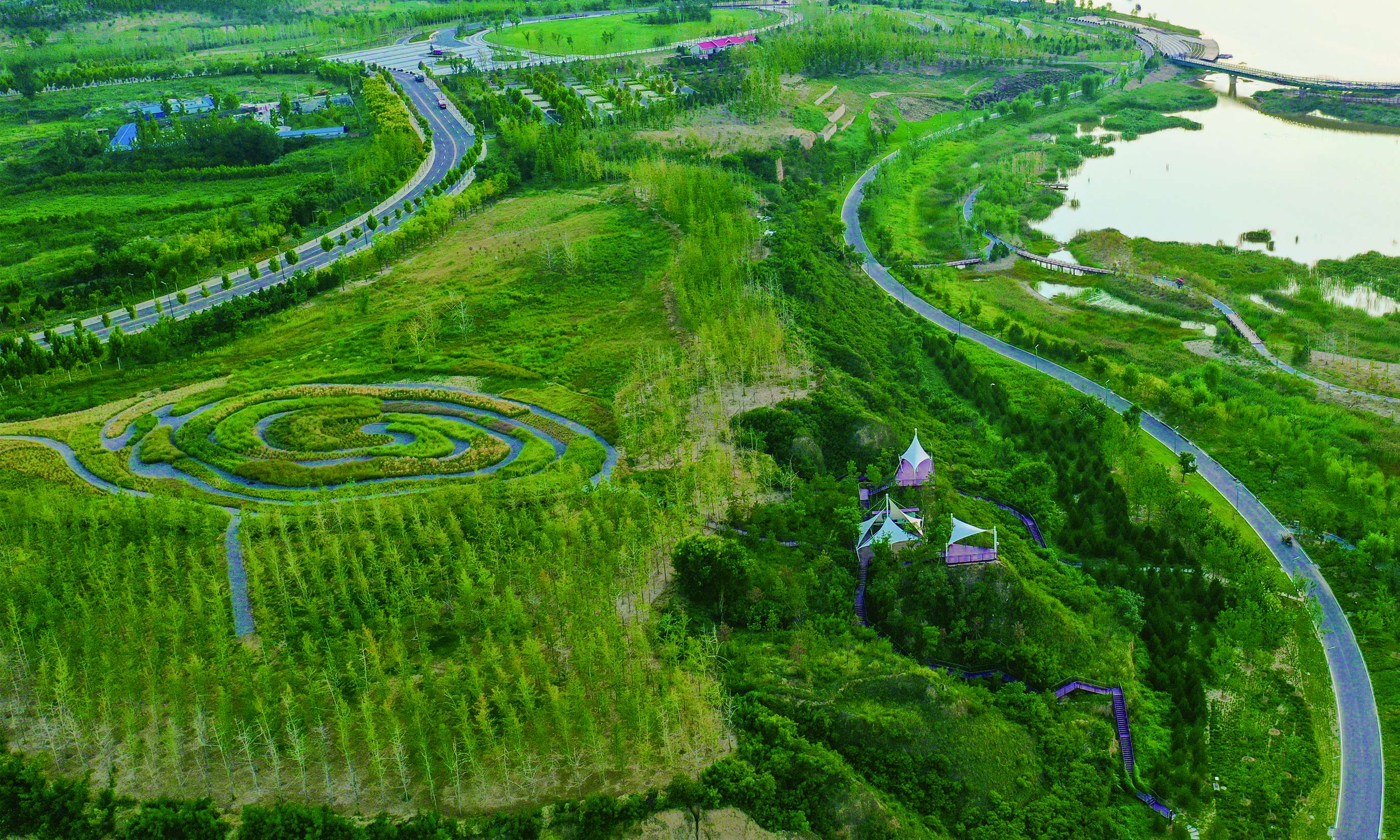 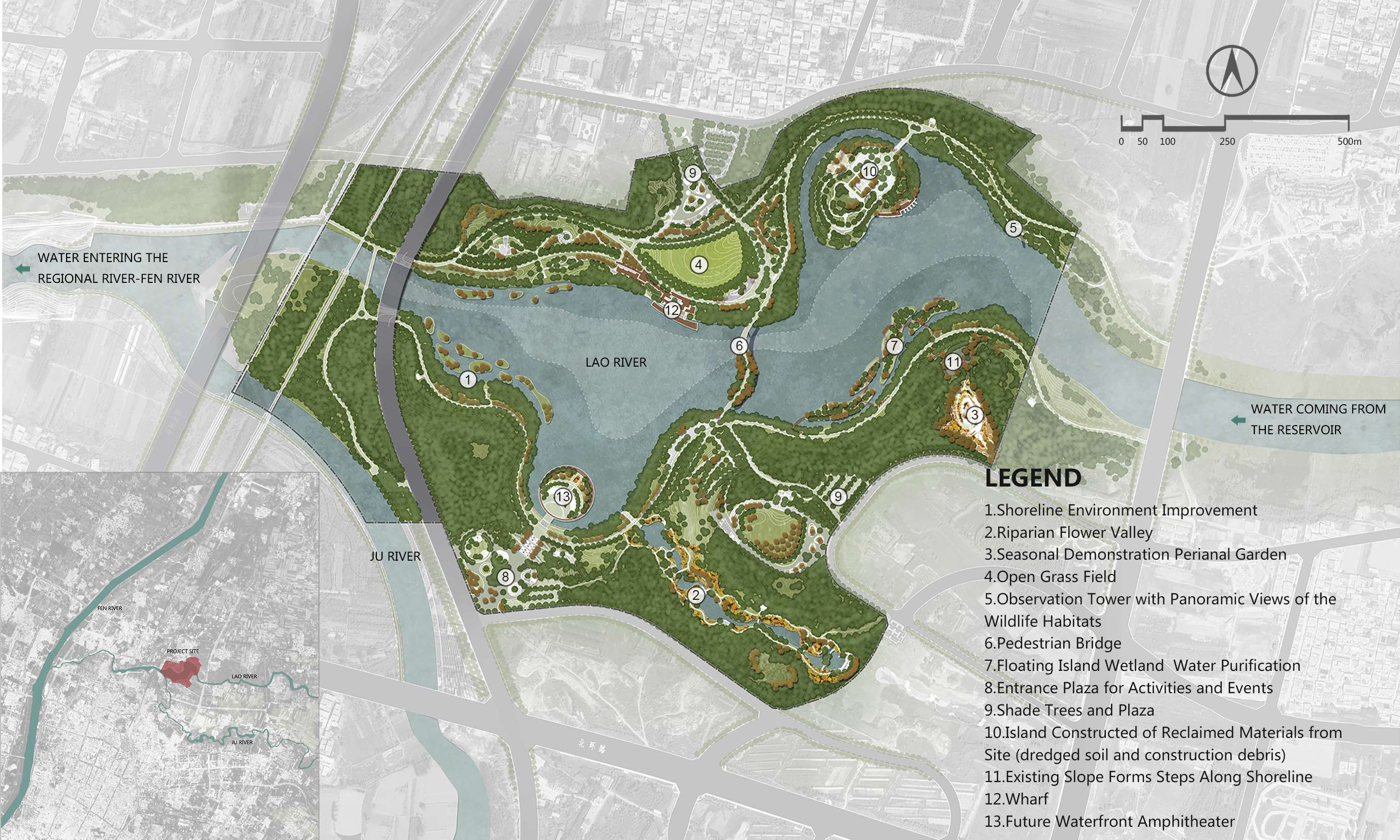 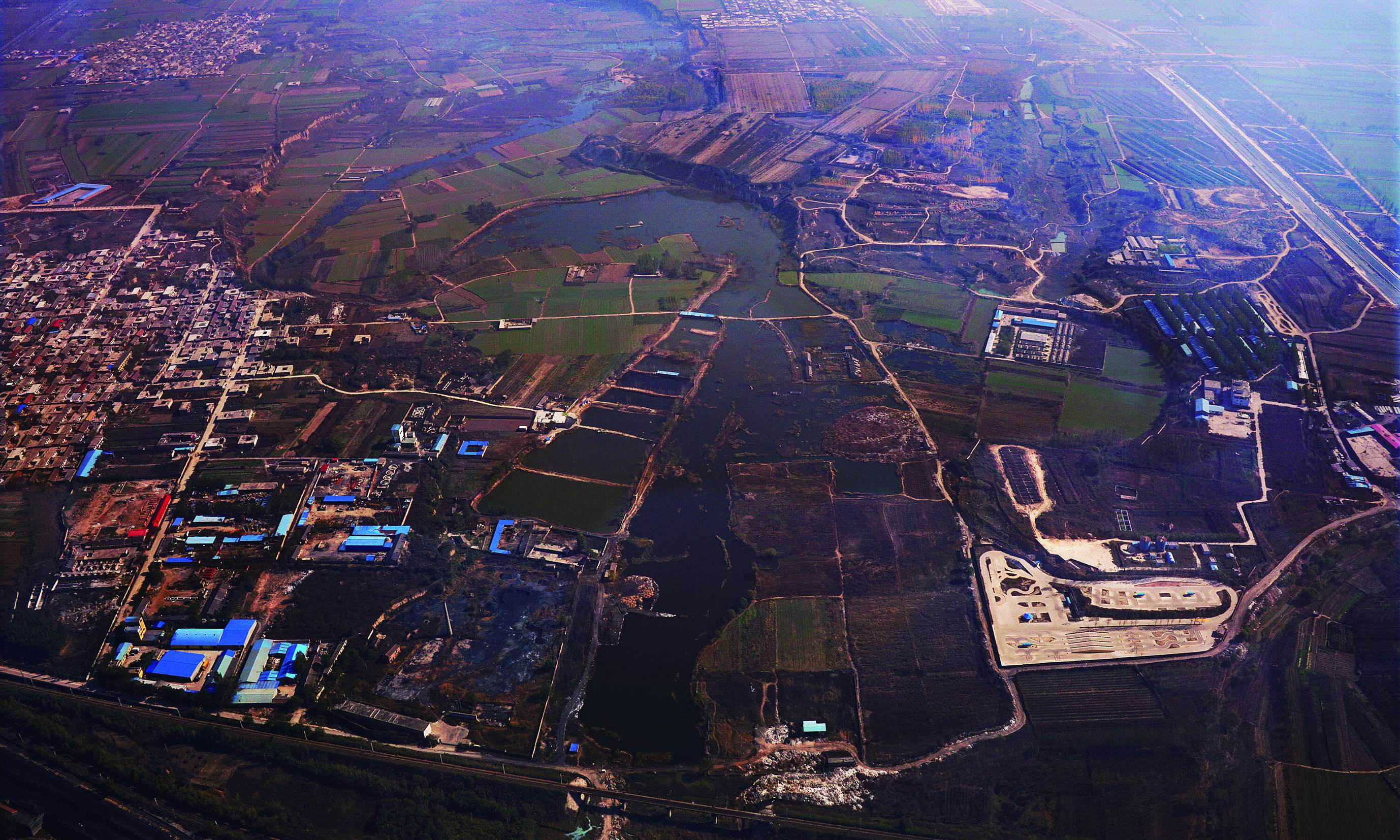 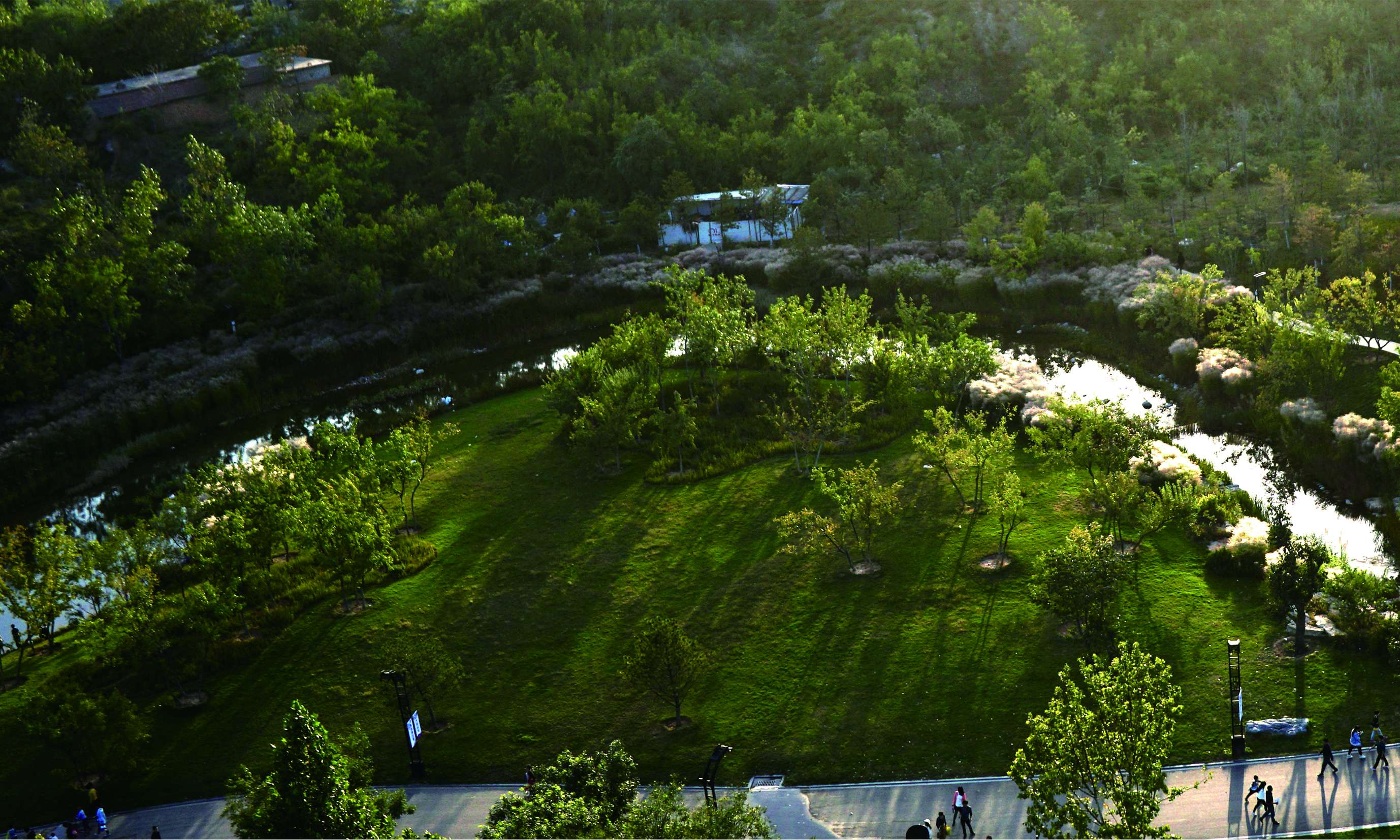 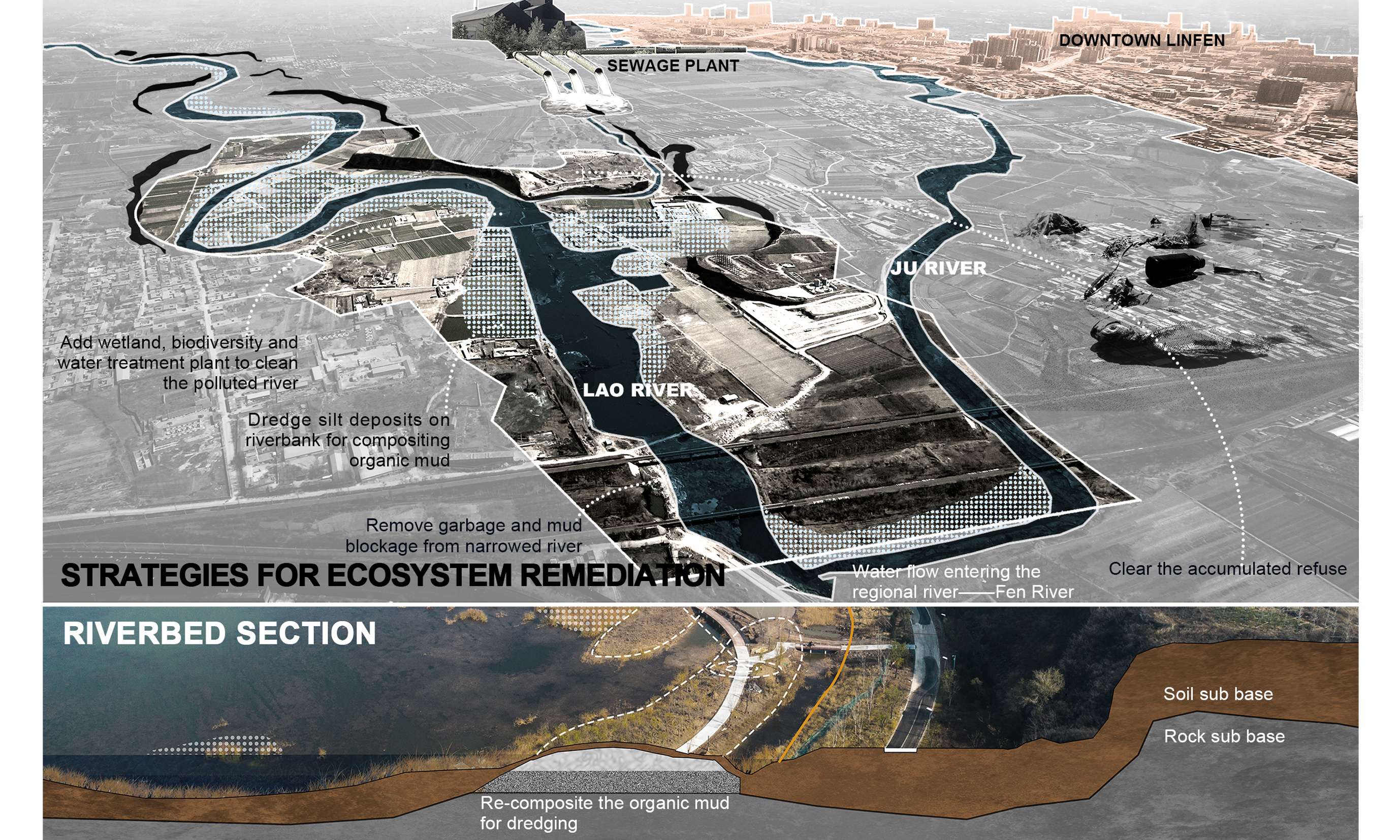 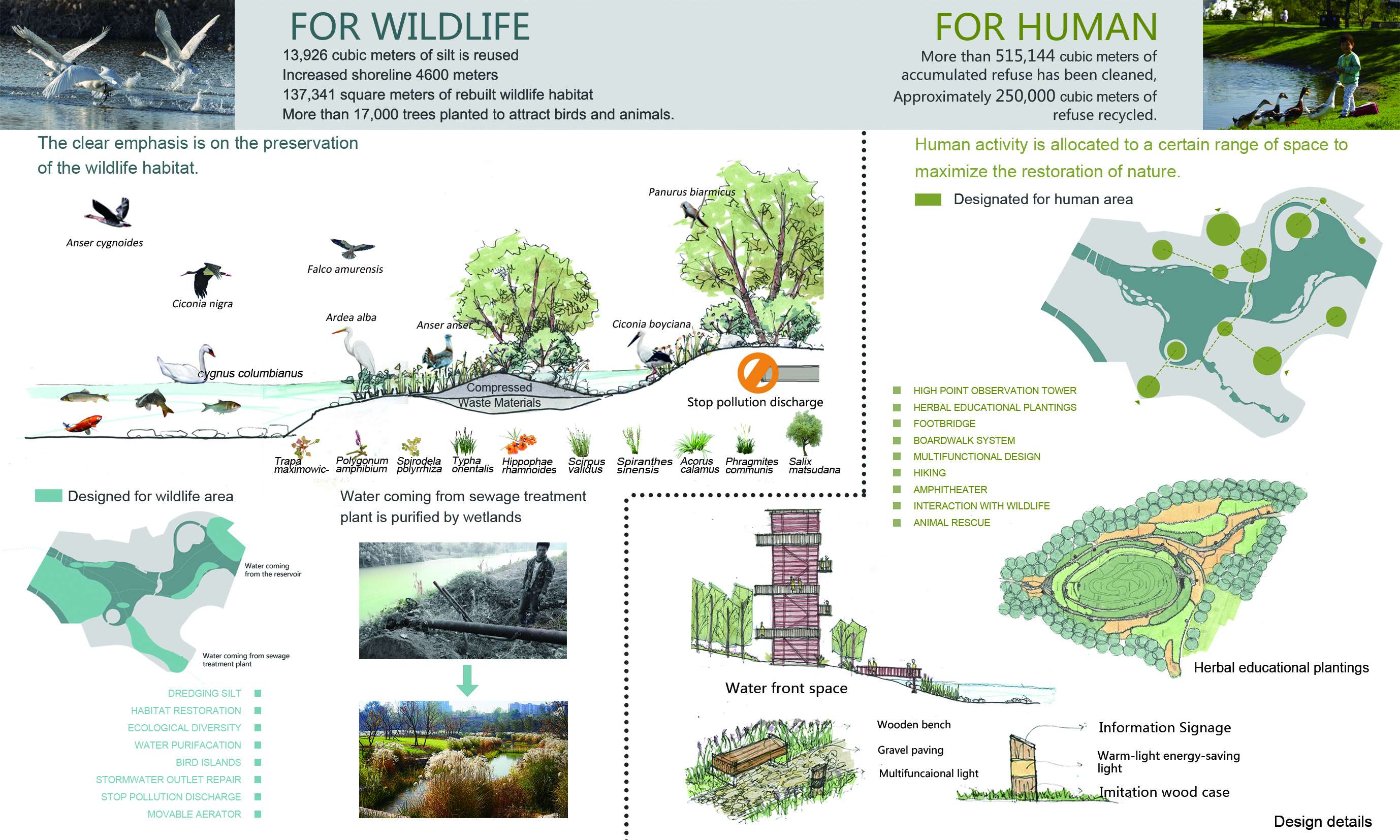 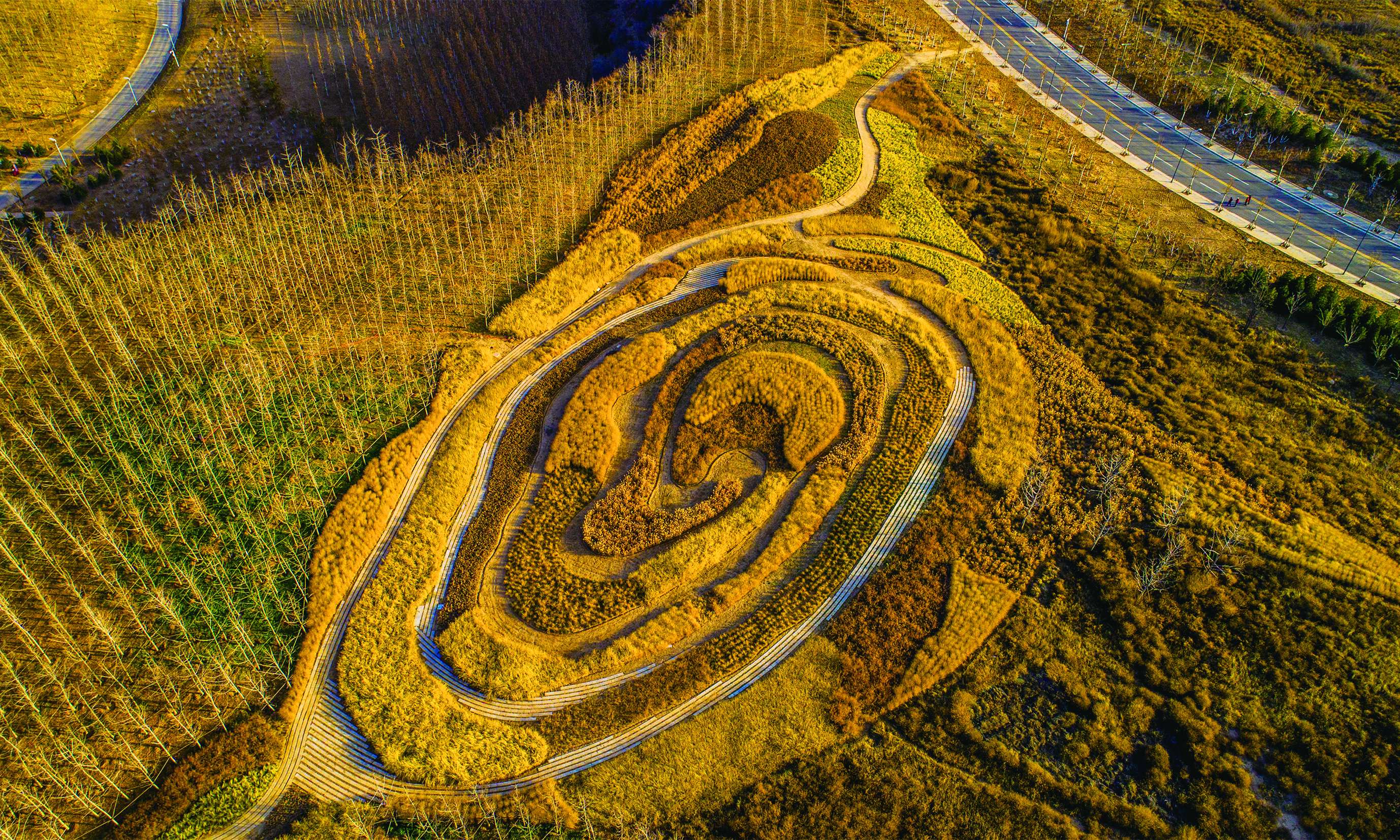 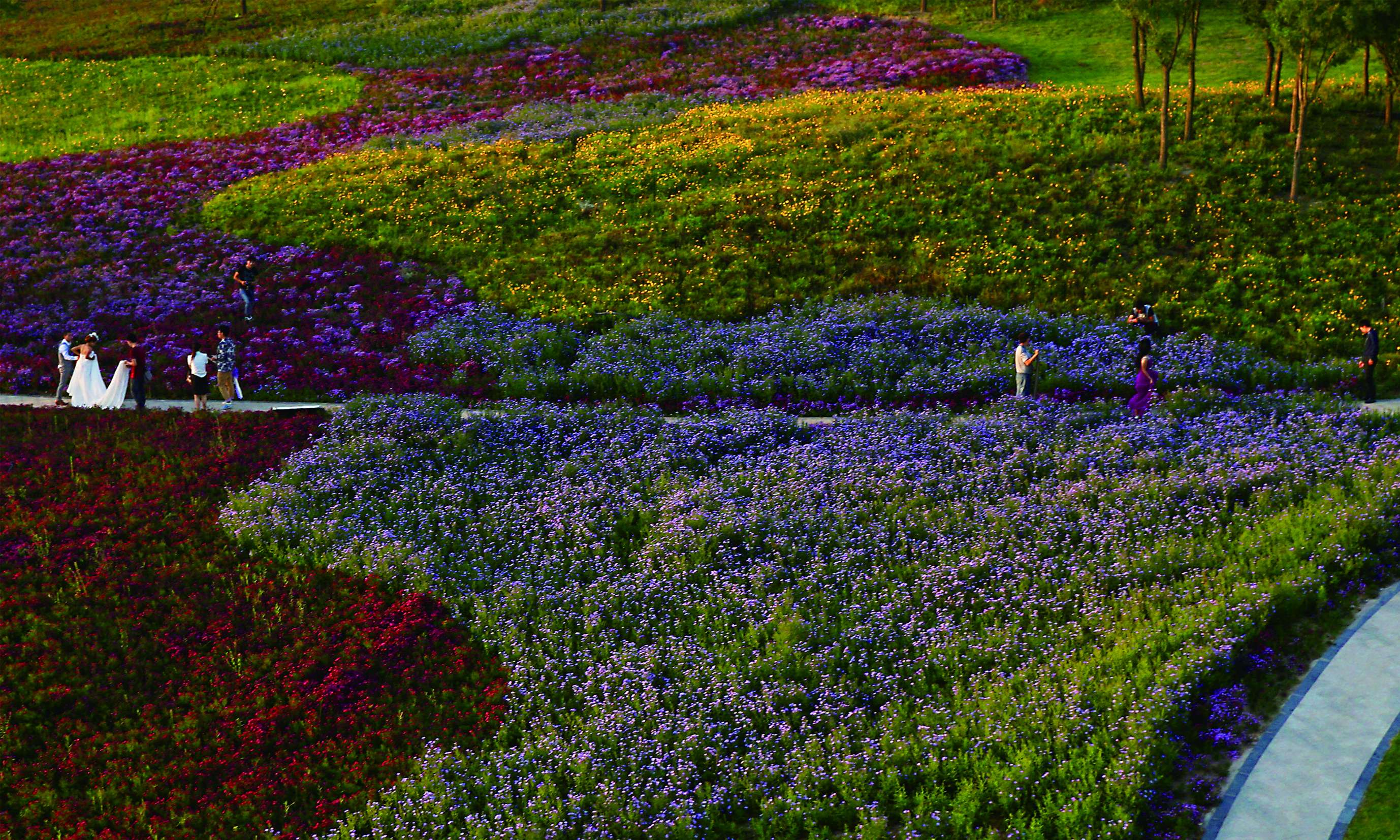 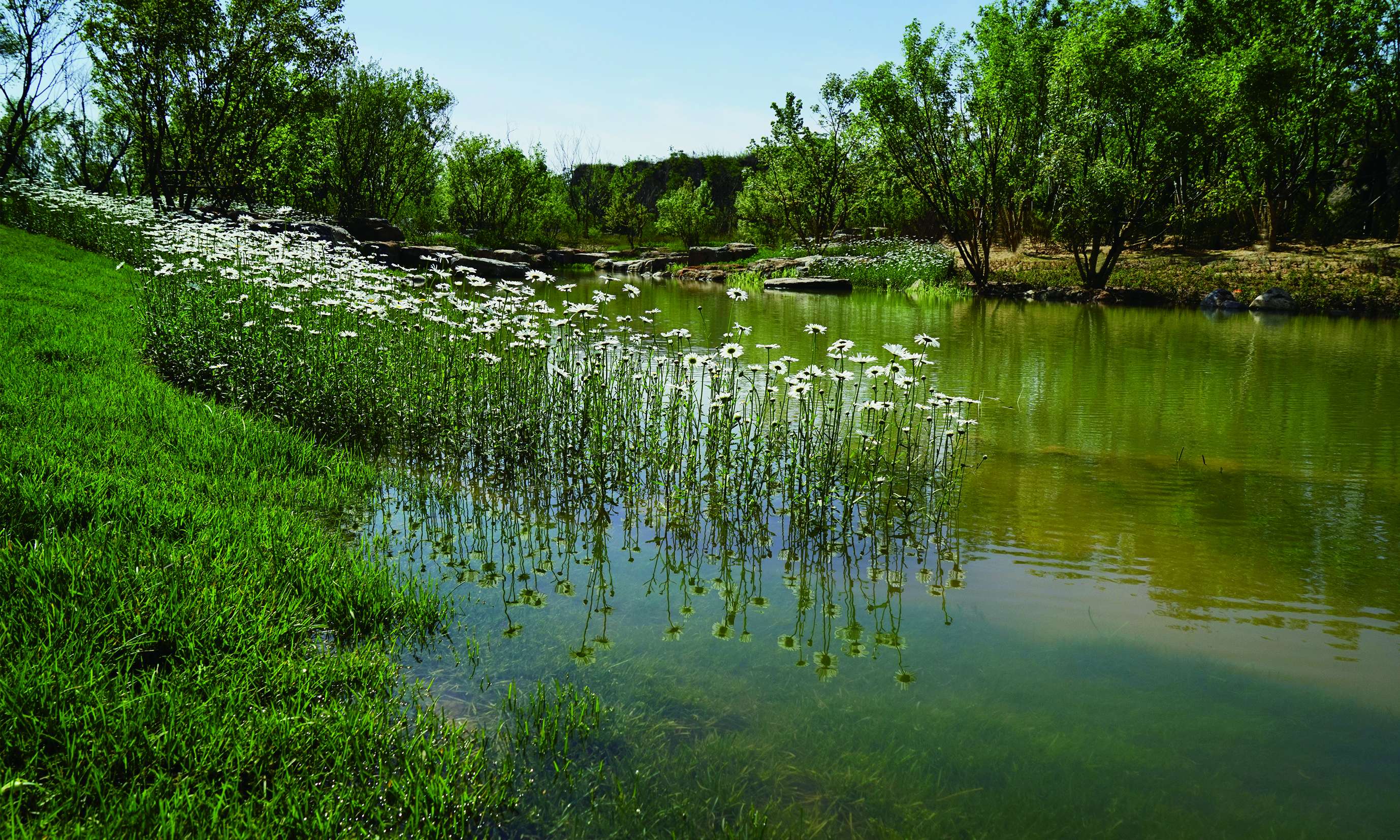 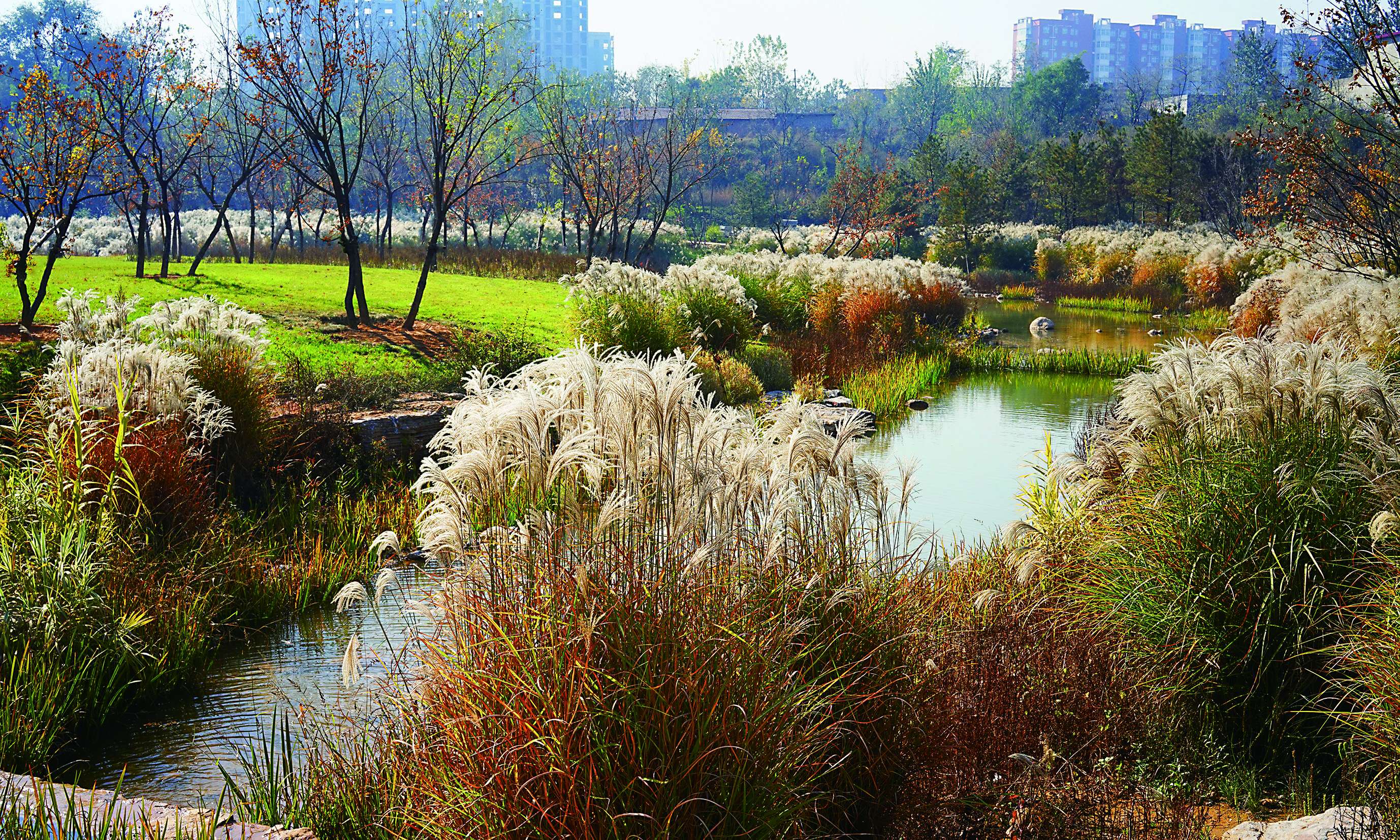 The Lao-Ju Riverfront Restoration project transforms 373 acres of uninhabitable brownfield into a green “Living Filter.” This project is the prototype section of a large-scale master plan for the area. The ongoing goal is to revitalize this heavily polluted waterway and provide Linfen residents with a much needed waterfront recreational park.

The city of Linfen, with a population of 4.5 million people, in Shanxi Province, China was dominated by coal-mining industries for many years. The absence of effective zoning and pollution controls contributed to the blockage and pollution of the adjacent Lao-Ju River waterways. Working closely with engineers and ecologists, the pollution source that previously discharged directly into the river was redirected towards the municipal sewage treatment plant. The team conceived of a landscape designed to revitalize aquatic and terrestrial habitats, re-introduce native plants, and reduce flooding by restoring the channelized river’s edge to thoroughly treat water before it is discharged into the river.

The site has an average annual precipitation of 21.5 inches, mostly concentrated (approximately 60%) in September. As such, the landscape designers accounted for the large influx of heavy run-off with flood management, graded slopes, added erosion-conscious planting, and structural durability, while contributing to the functional and aesthetic landscape.

The approach was to treat both humans and wildlife as equally important users of the park. The design initiatives were twofold: to create a public space, catering to the urban residents, located south of the site, and to restore an ecologically sustainable natural habitat benefiting regional and migratory wildlife. The landscape design includes wildlife habitats, a flower field stream, riverfront overlooks, and an amphitheater for large-scale events. The final design product has been hailed as a model for redefining urban life, a catalyst for residential and commercial growth, and a significant contributor to city’s sustainable tourist industry.

Once a heavily polluted and derelict river, Lao-Ju River Oasis is now a verdant greenway and vibrant civic space that interlaces the natural and social fabric of downtown Linfen, underscored by the ecological approach of the overall climate sensitive design.

The city of Linfen, in Shanxi Province, China, is a microcosm of industrialized Chinese cities. For too long, absence of effective zoning and pollution controls allowed industries to dump toxic and construction wastes indiscriminately, causing extensive environmental damage. The city was dominated by heavy industrial development for many years, contributing to the blockage and pollution of the adjacent Lao-Ju River waterways.

Linfen has a population of approximately 4.5 million people and the Yaodu district, in which the project is located, has a population of 944,000. The Lao-Ju River Oasis covers a total area of 373 acres. The Yaodu District of Linfen was a key coal-mining site in China and has a total geological reserve of more than 2 billion tons of coal. Along with its rich mineral deposits, Linfen has an abundance of wildlife. The region has 243 species of birds, accounting for 81.1% of the total number of species in Shanxi Province. This wildlife population had been subjected to intense pressure from the ecological damage resulting from mining, and years of environmental abuse and neglect.

The long term, on-going project goal is to transform a post industrial site into a popular riverfront park. An interdisciplinary team was assembled to implement environmental remediation solutions. The design initiatives were two-fold: to create a public space catering to the large number of urban residents located south of the site, and to restore an ecologically sustainable natural habitat benefiting regional and migratory wildlife. The river itself was used to divide the area into two parks, one to the north dedicated to a bird habitat, and one to the south for community park functions.  Through this strategy, the designers were able to devise a plan that addresses the twin needs of designing for human recreation and provide for first-hand encounters with nature, as well as re-establish important wildlife habitat in the region.

First, to upgrade the basic infrastructure and sustainable standards of the river, the team worked closely with environmental engineers to decontaminate the water. The pollution source that previously discharged directly into the river was redirected towards the municipal sewage pipe to the sewage treatment plant. The water is only discharged to the river after thorough treatment.

Secondly, to transform the site, the earthwork strategy was to establish a minimum cut-and-fill around the perimeter of the site. In order to reduce downstream catchment pressure, river channels were widened to create water storage areas with islands formed to reintroduce aquatic plant communities that filter and mitigate water flow. Overall, 182,204 cubic yards of mud was dredged from the river to clear the blockage, 1,465,614 cubic yards of grading for landform treatment was done, and 1,464,960 cubic yards of soil improvement was completed on site.

The pungent river was gentrified and is now a welcoming public riverfront park. Residents are already benefiting from this initial phase of the project. Migratory and local bird species have also returned to the river habitats in large numbers. Through a revitalized ecology, as well as footbridges and paths, the project is now a space for animals and people to live in peaceful co-existence.

A series of walking paths along the river reconnects neighborhoods to this vibrant landscape, granting access to the river’s edge for the first time in a century. A bird-watching tower, accessible only through a footbridge designed to minimize disturbance to the wildlife, allow visitors to observe the wildlife on the islands within the wetlands from a remarkable vantage point. Pedestrian pathways along the Lao-Ju River Oasis greenway serve as outdoor jogging routes that leads to a boardwalk created for the observation of the river’s tidal cycles. The area adjacent the intertidal zone offers small venues for socialization and outdoor nature classes.

A colorful Perennial Garden set on rolling hills combines colors, textures, scents and elevated depth of perception to offer an unforgettable experience for visitors. An area known as ‘Flowering Streams’ features a natural stream with giant, smooth-surface boulders inviting people to linger and observe the natural landscape. Near the riverfront is the ‘Flower Sea’, bursting with seasonal flushes of color which has become a popular destination for photography.

The vanishing wetland habitat has been restored and native biodiversity preserved. Today, the restored river’s edge mimics a naturally protective floodplain with retention ponds and wetlands. The river that once posed a continual threat of flooding to neighboring areas is now capable of handling the ebb and flow of the water volume during storms and rainy season.

Since the parks completion, there has been no significant flooding damage to the park or surrounding area. Today, the river meanders through walking paths, rest areas and park amenities, creating a peaceful and stimulating environment for people and wildlife. The phase I park of the Lao-Ju River Oasis River font Ecosystem is now a high-performance landscape amenity contributing the vibrancy and sustainable economic growth of the region.