«A sylvan park as a garden for Candide» 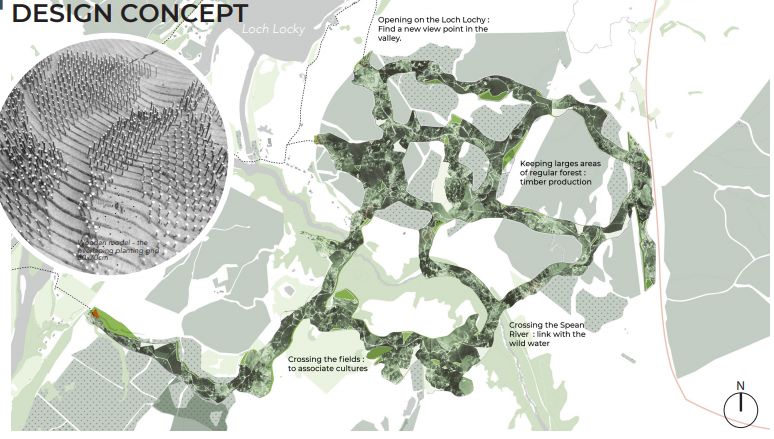 «A sylvan park as a garden for Candide»

My master’s diploma project focuses on the anthropisation of landscapes during climate change, rooted in a critique of mass tourism and tourists in Scotland who view travelling as a form of consumption, in contrast with travellers or voyagers, who search for genuine discovery and interconnection.

In this project, the forest becomes the basis for the design of meeting places and exchanges between all the contributeurs and stakeholders of the territory.

Global climate change is causing drastic changes to the Scottish landscape, of which 17% is forest cover and as such, strongly impacts the Scottish timber production.

This project addresses these concerns, through the creation of a an evolutive forest park, progressing from a productive forest to a sylvan parkland including increased biodiversity, recreational access and timber management.

This landscape architecture project designs with the transitioning climate in this territory by :

• planting diverses woodlands (deciduous and coniferous) to limit the risks of diseases and infections on a specific species. rethinks forest management from monospecific and even aged forest management to biodiverse plantings and uneven aged stands.

• accepts the natural recolonization of the forest by pioneer species, native and exotic.

The final and most important goal of this project, is to transform this forest into a central gathering place, introducing locals and travellers into this woodland and transforming the site into a witness of the climate transition in Scotland.