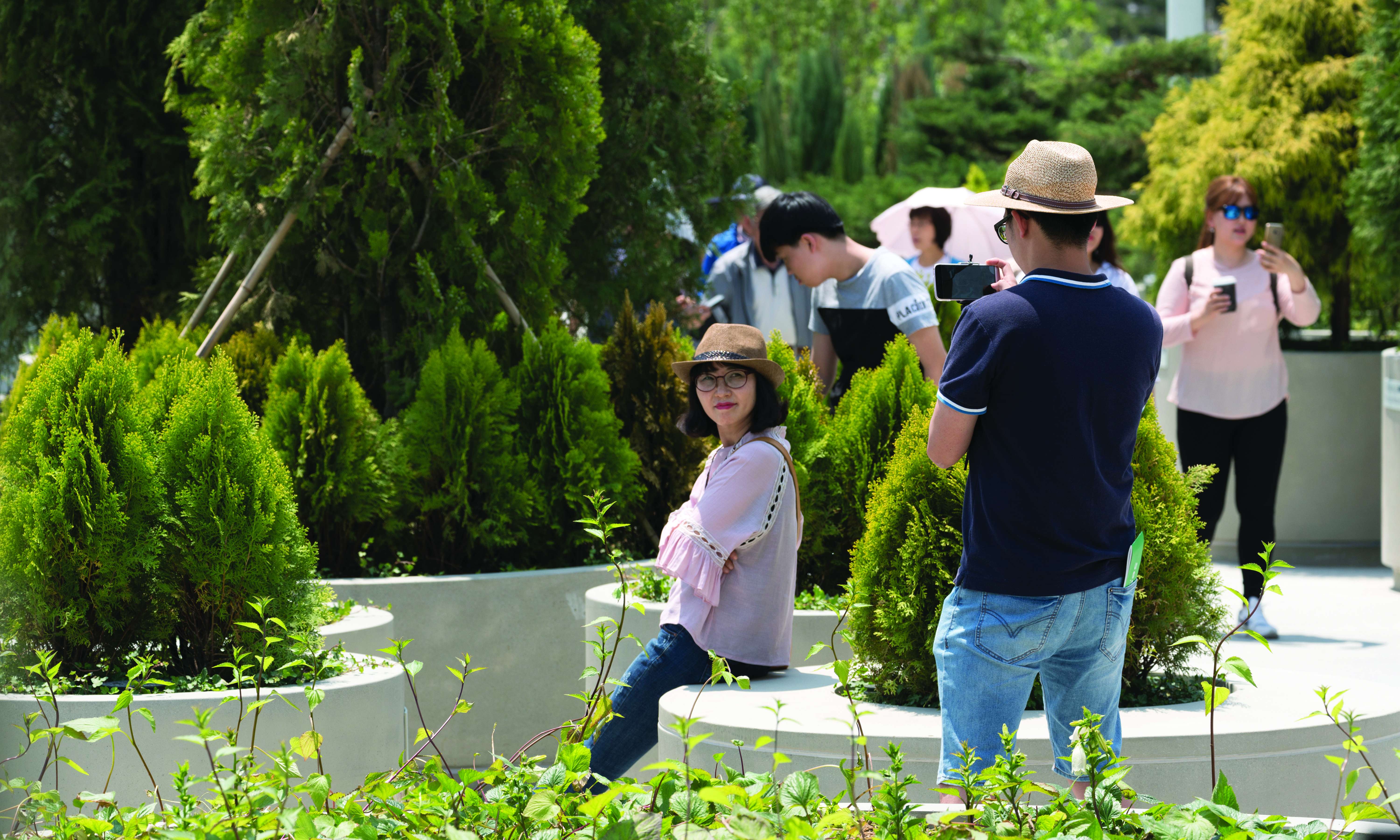 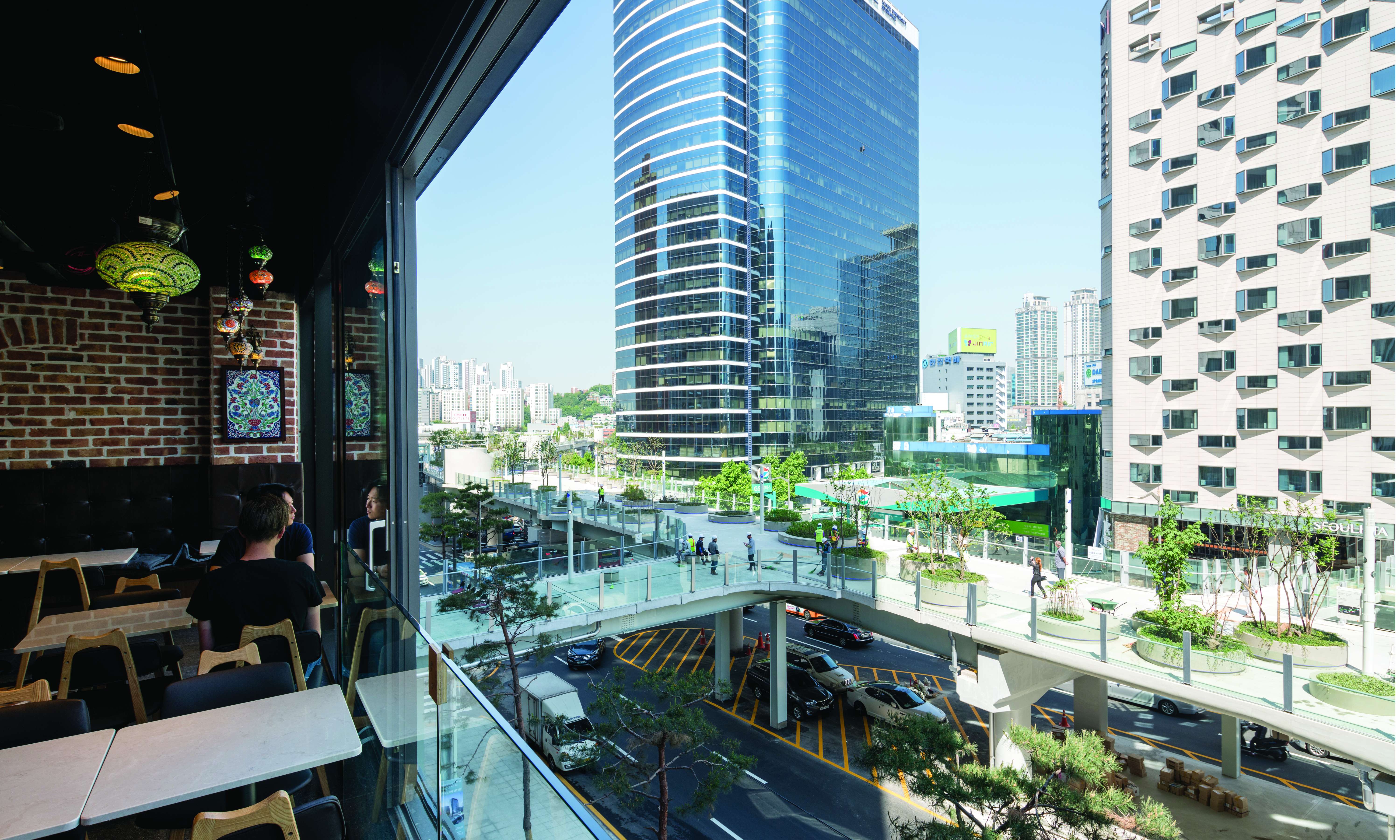 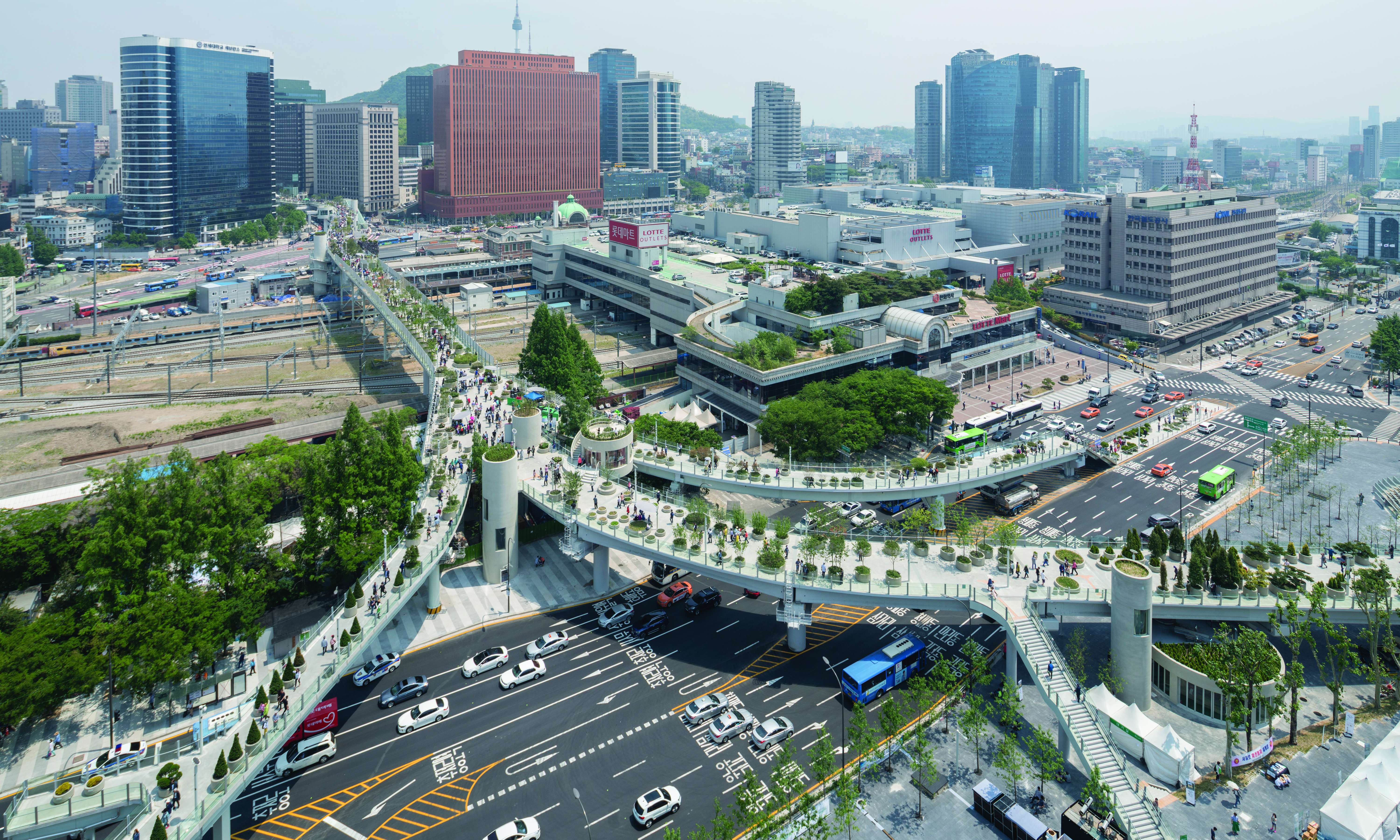 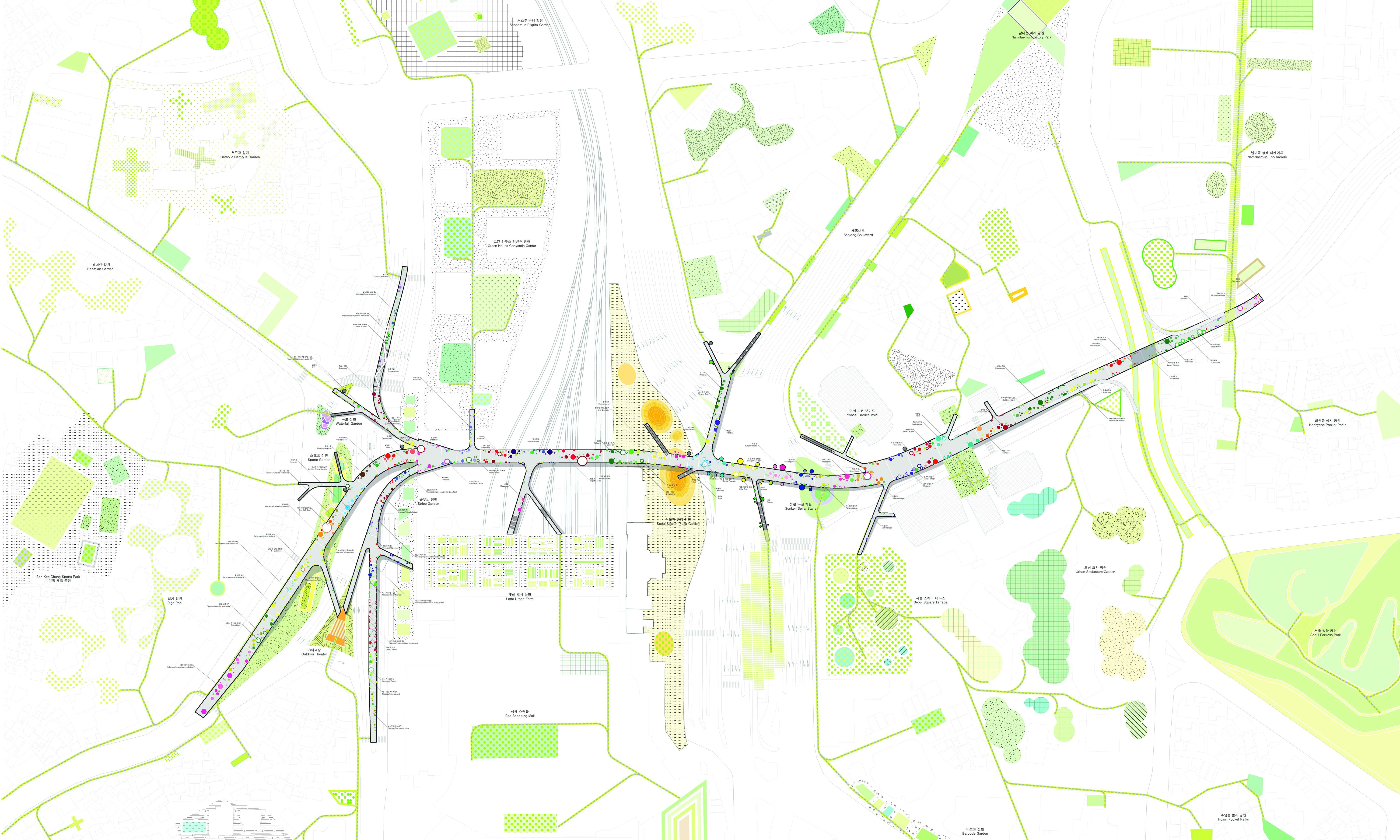 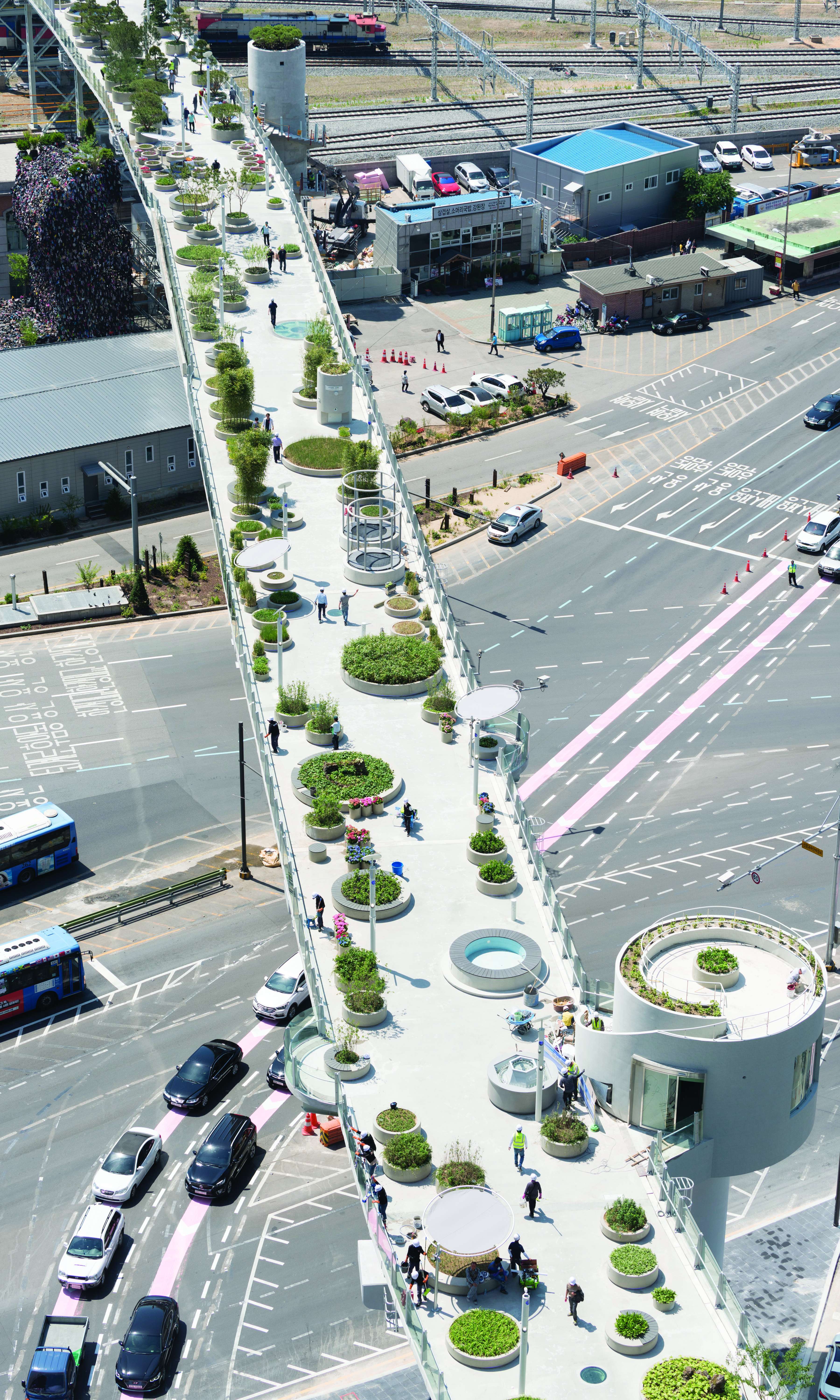 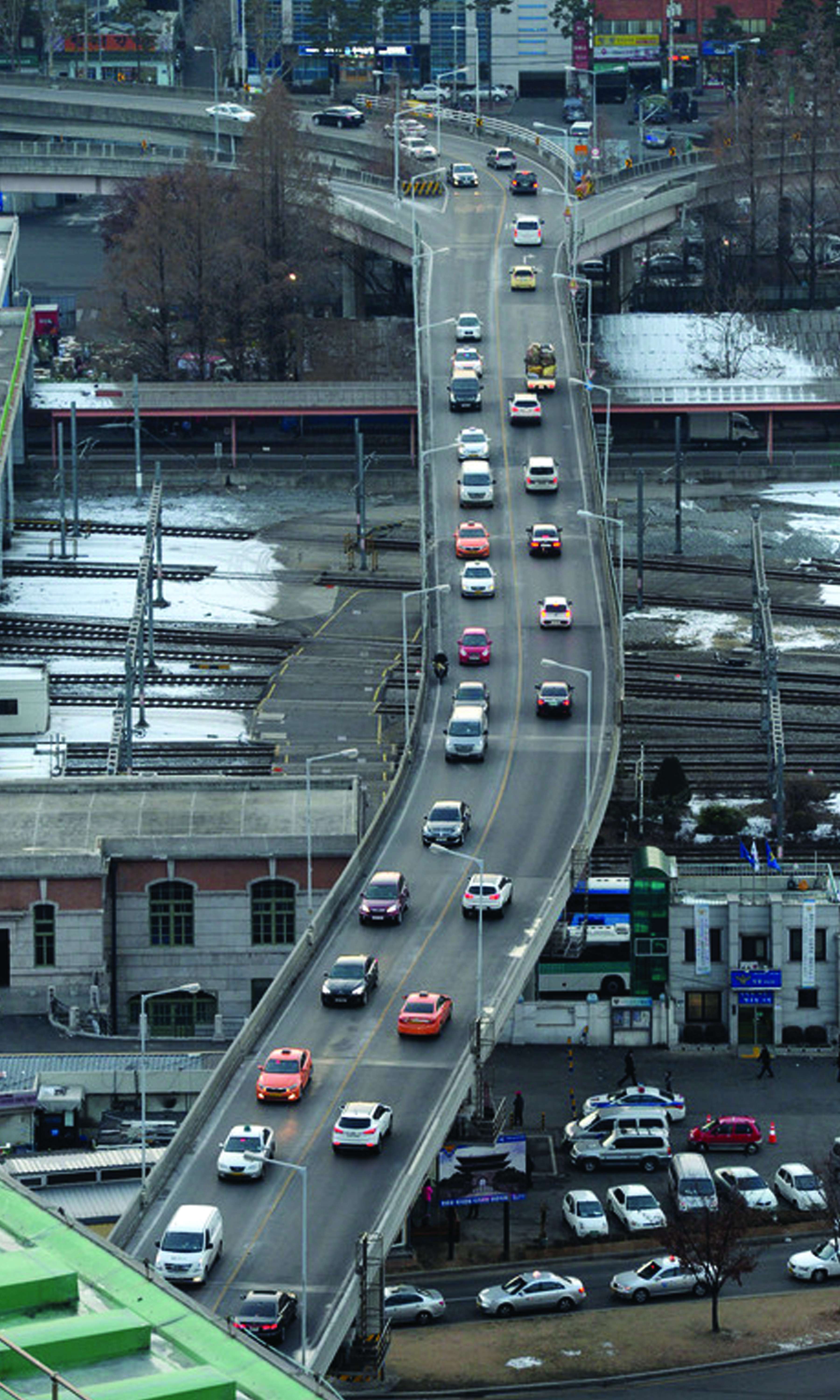 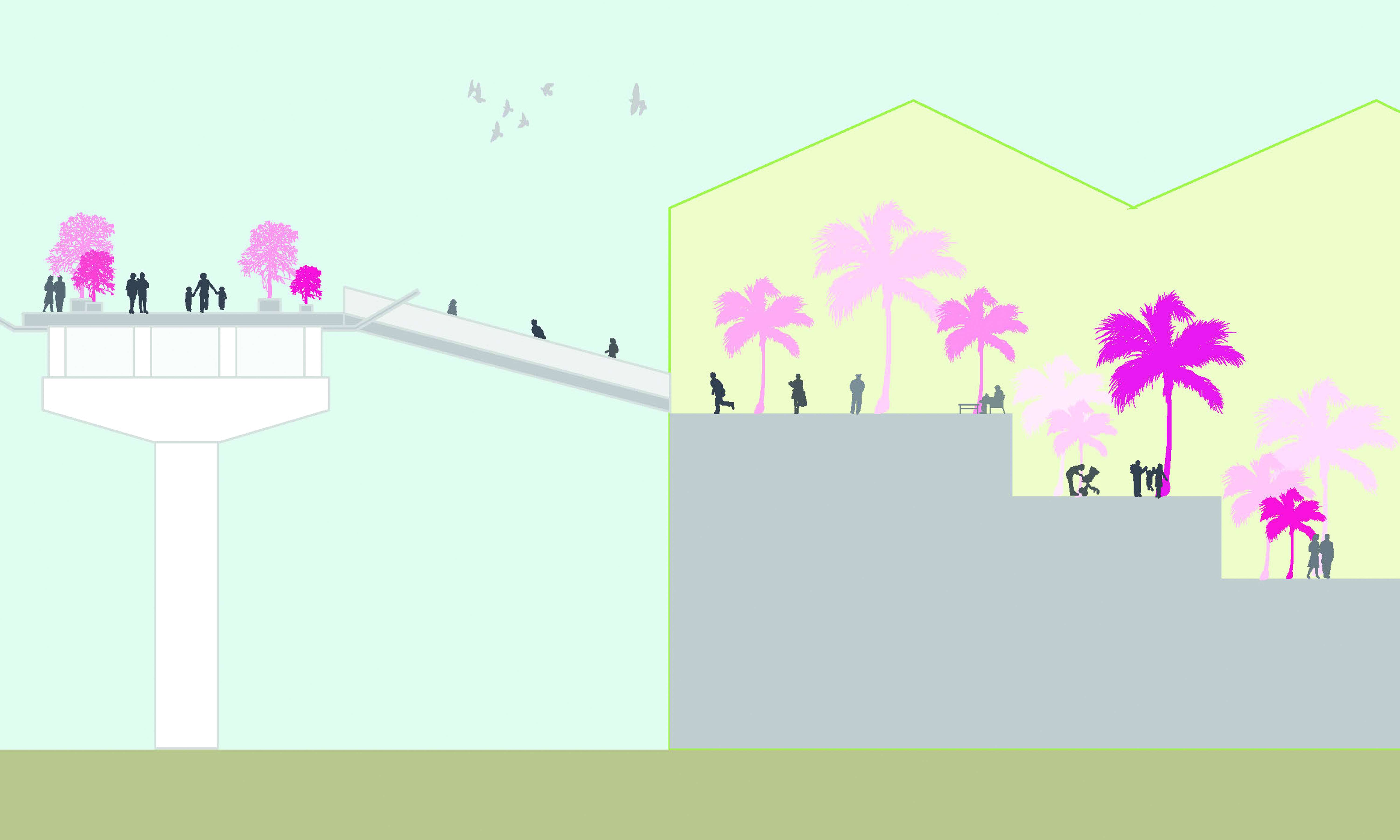 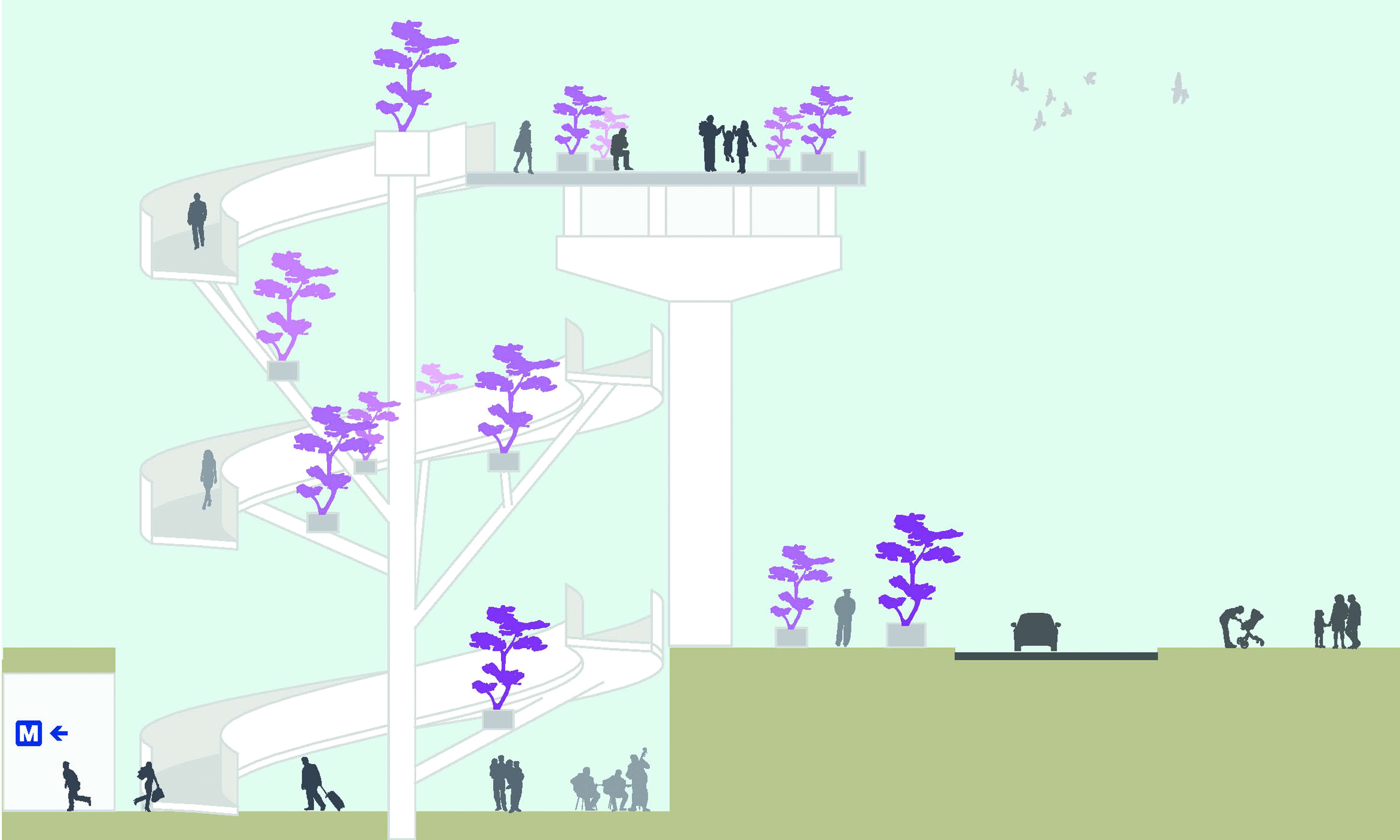 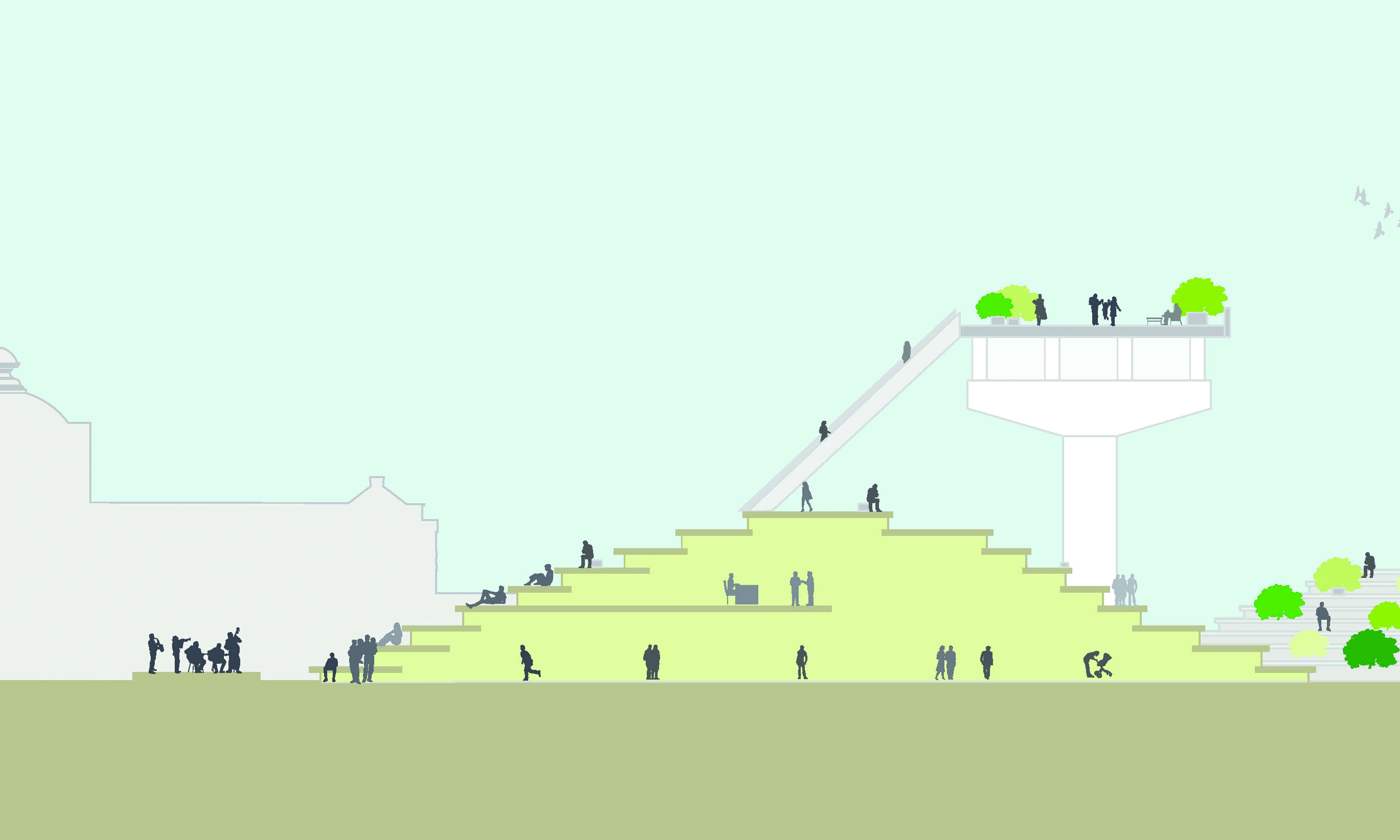 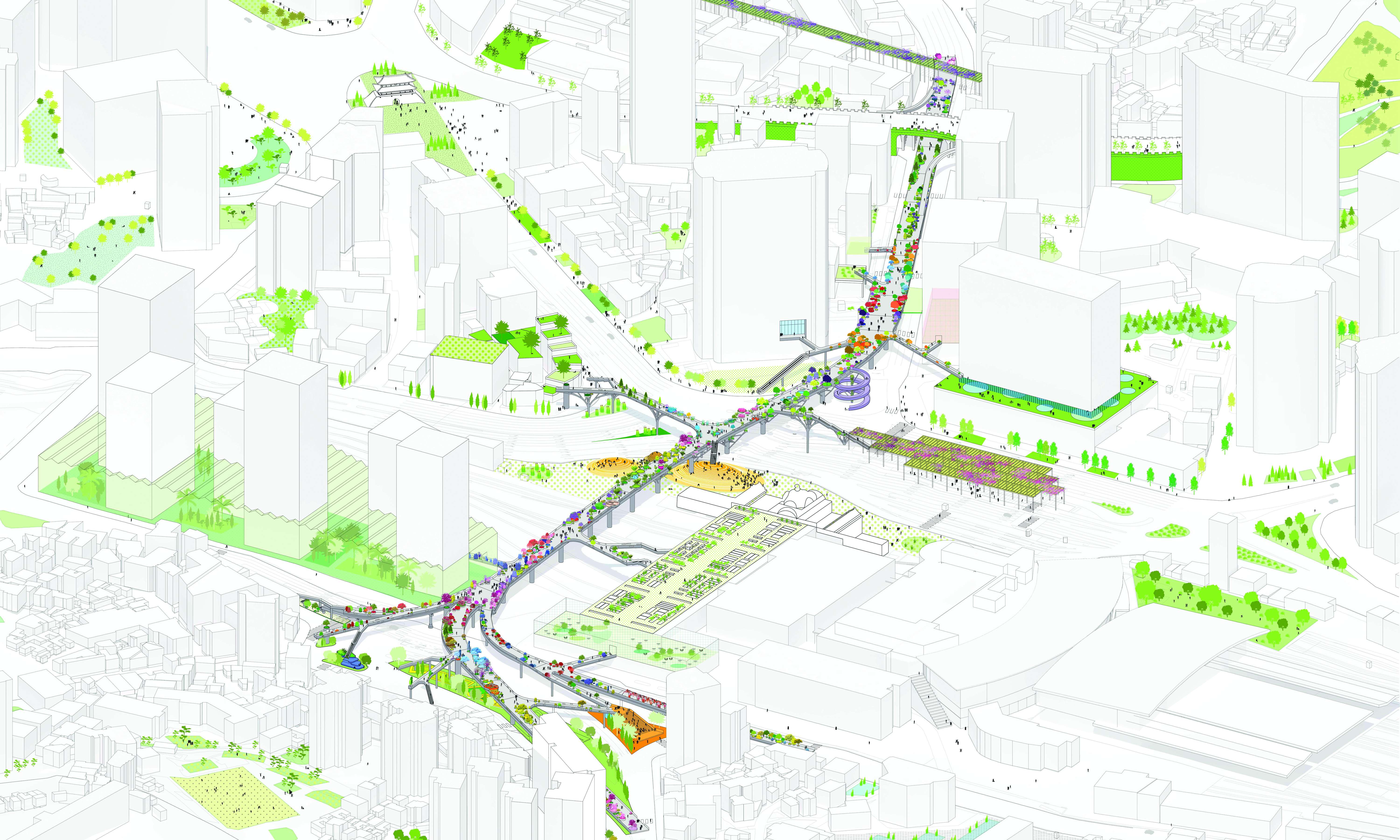 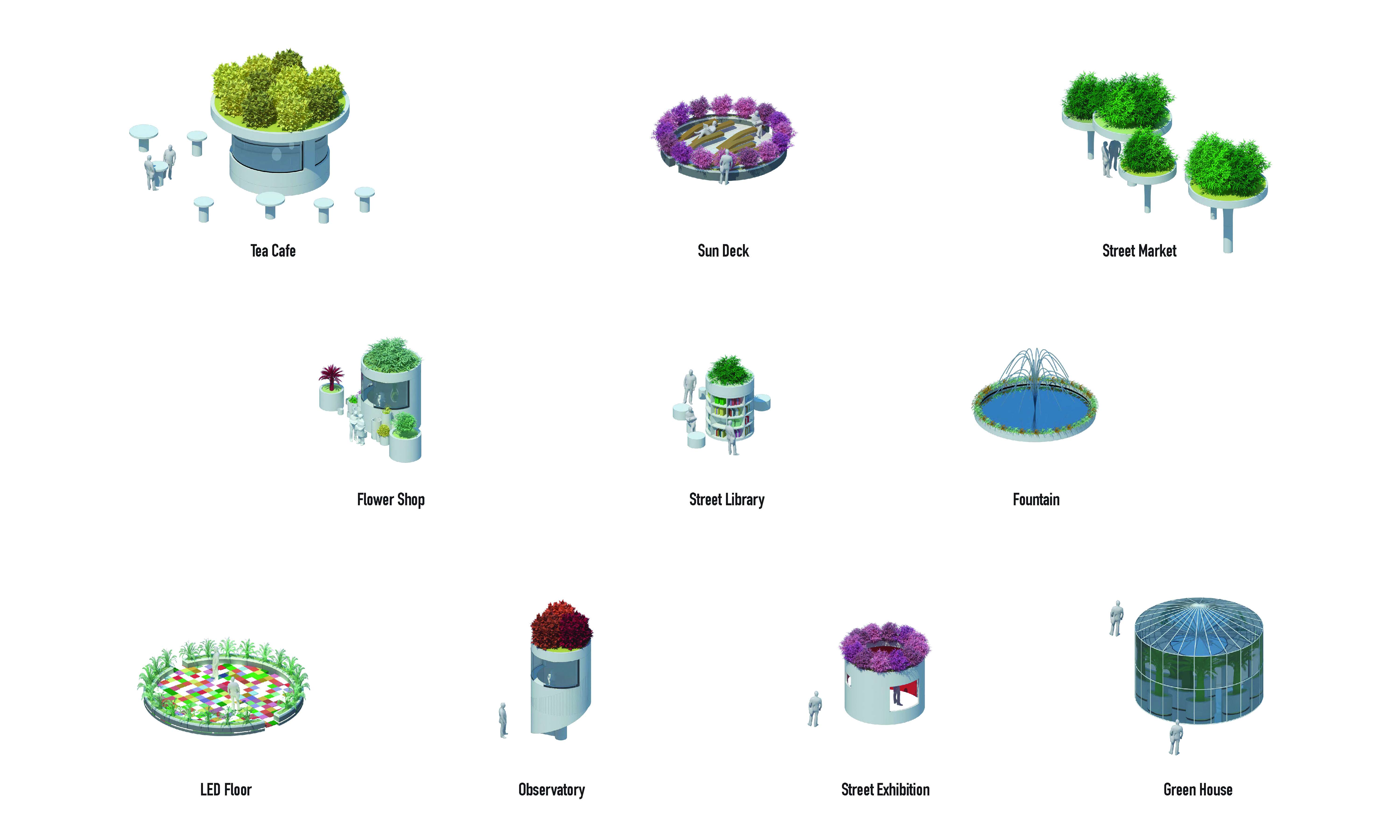 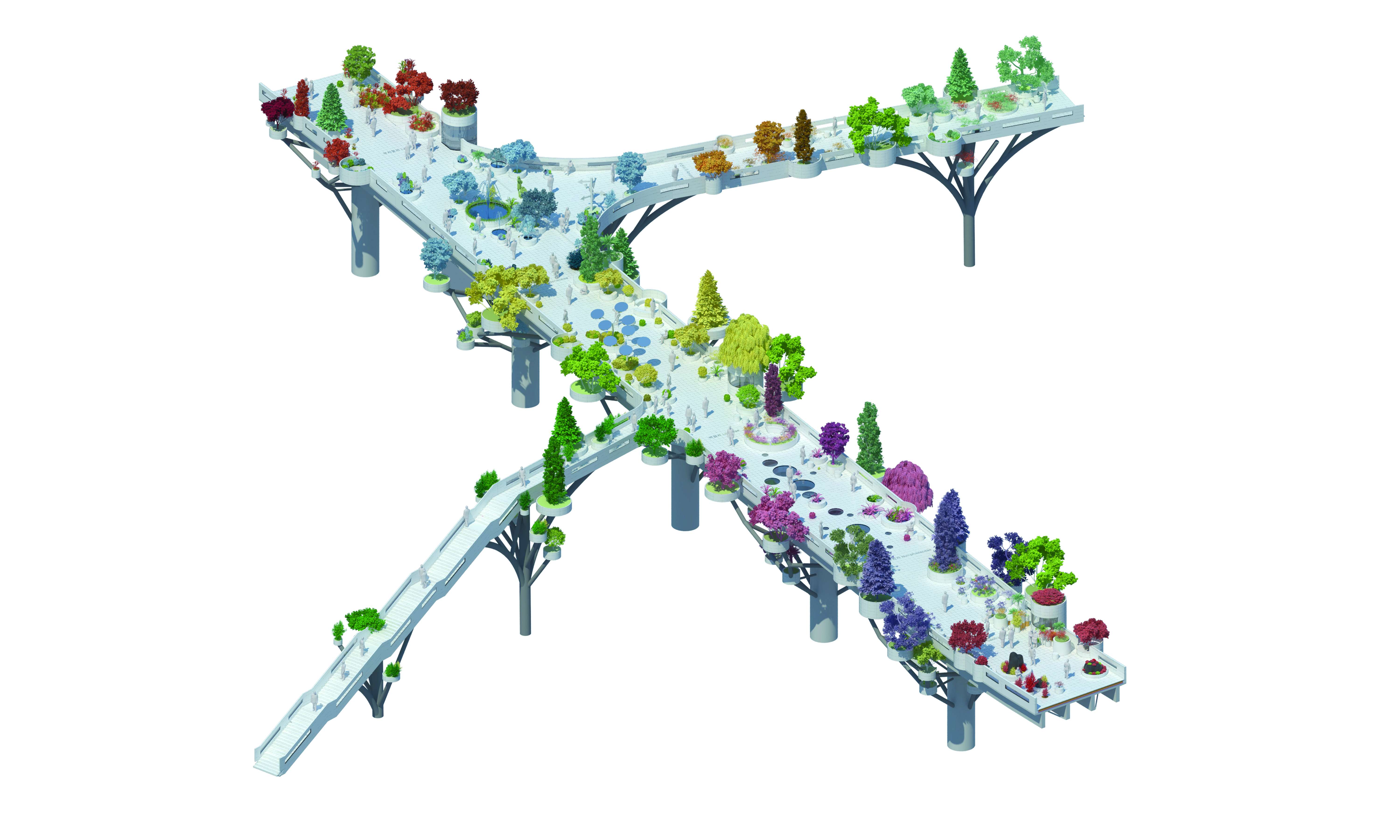 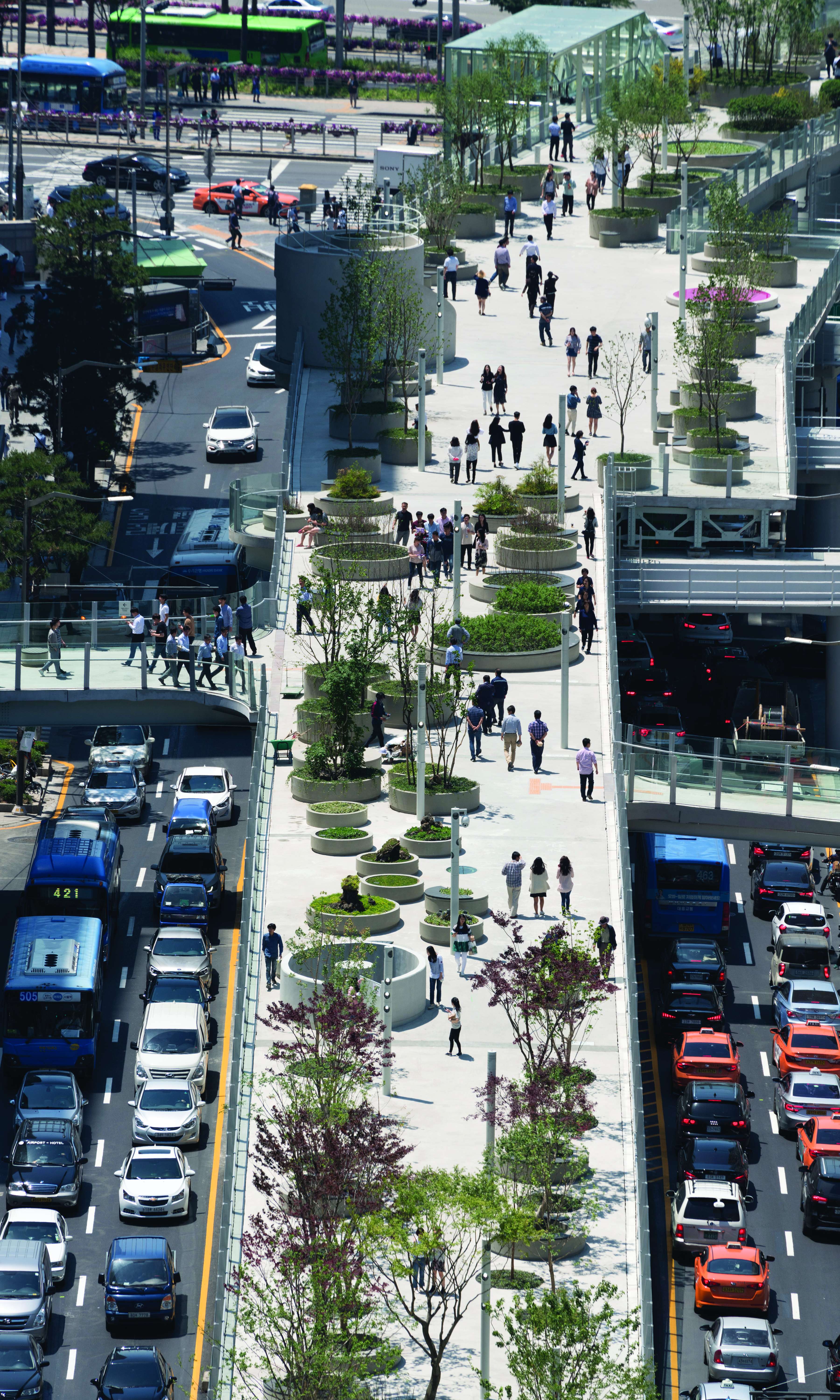 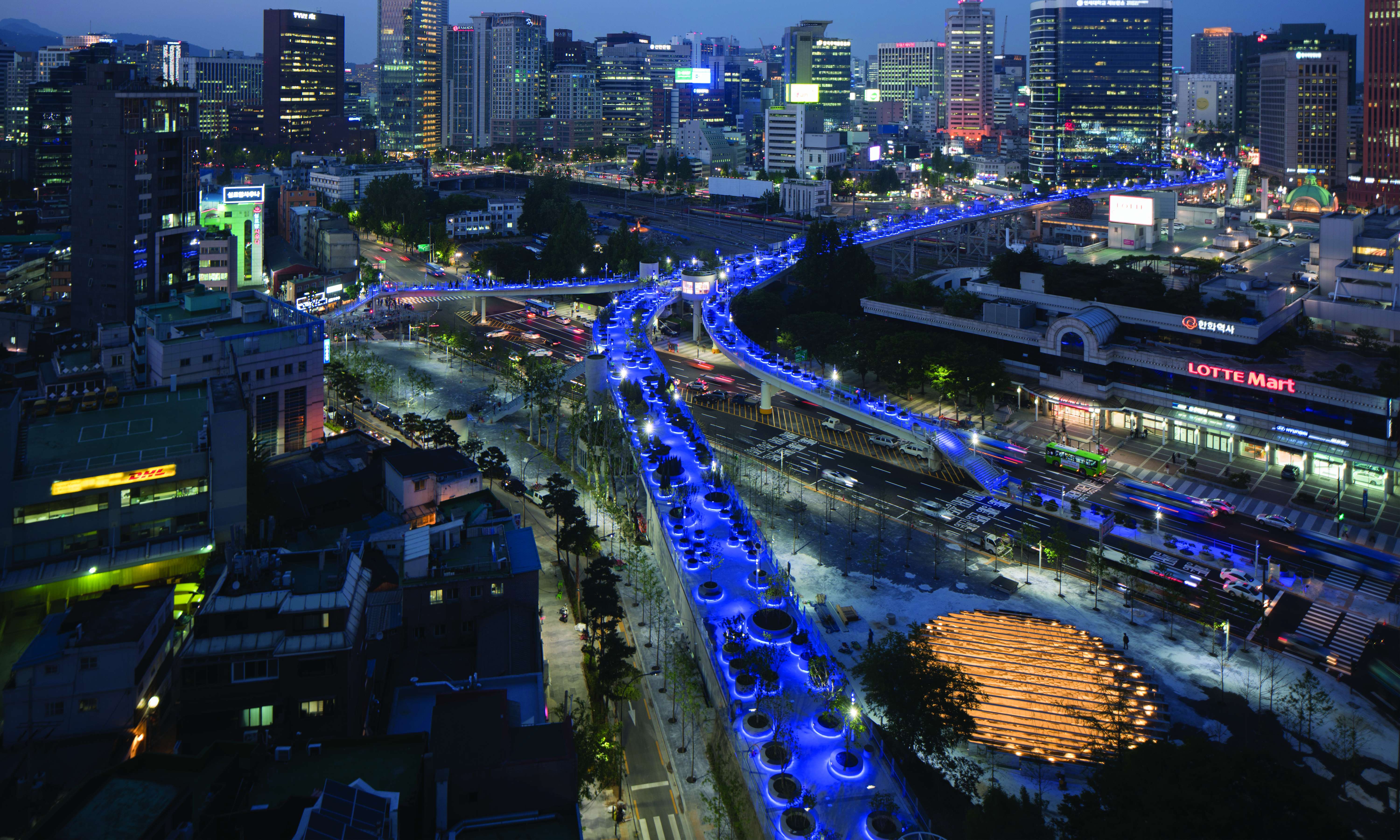 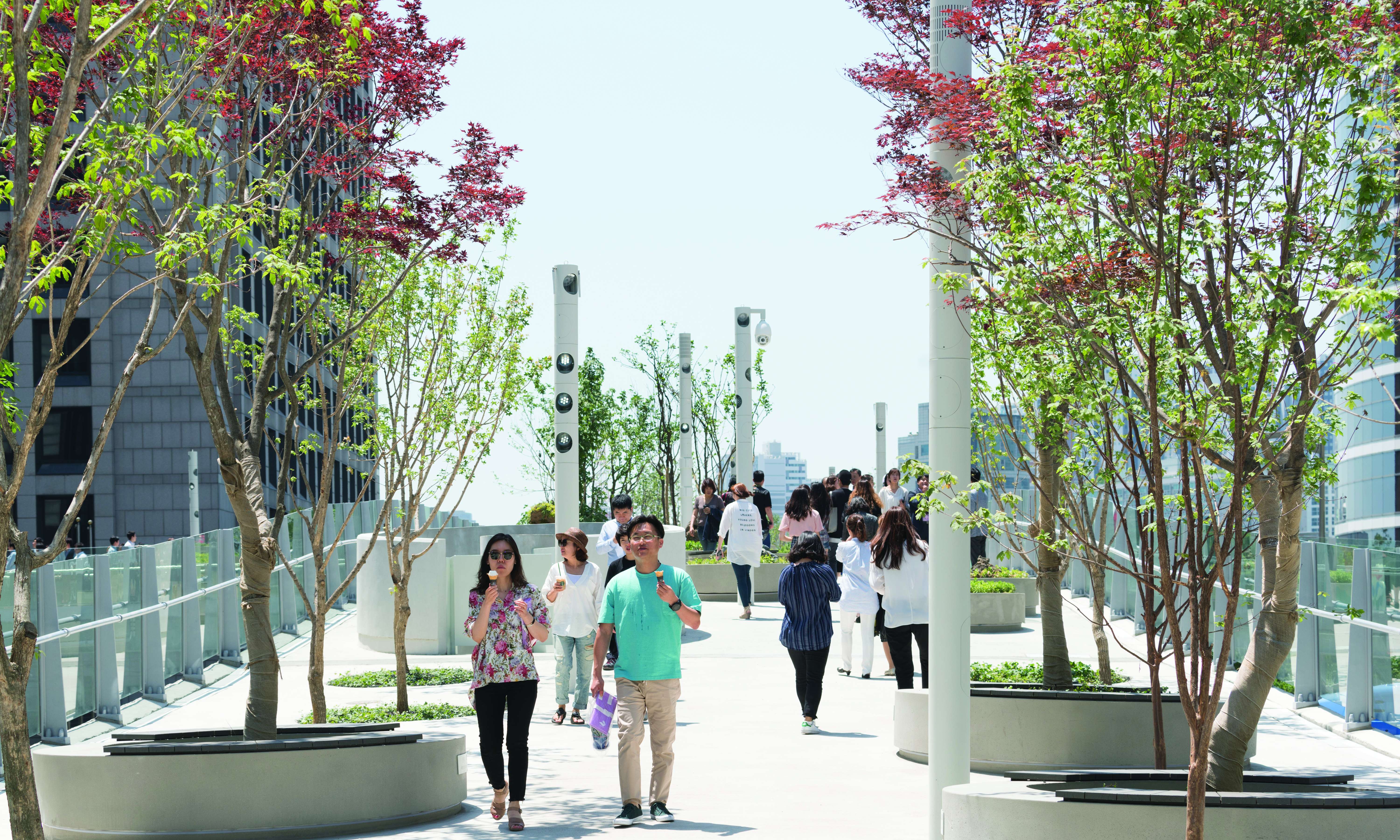 MVRDV’s design for Seoullo 7017 Skygarden offers residents and visitors of Seoul, a living dictionary of plants, shrubs and tress which celebrate the natural vegetation of South Korea. Located on a former intercity highway, this 983-metre long public park gathers 50 families of plants (including trees, shrubs and flowers) displayed in 645 tree pots and collecting around 228 species and sub-species. In total, the park includes 24,000 plants and connects city dwellers to nature right in central Seoul.

From the start, MVRDV engaged with the need to change this infrastructural element into a green symbol, changing the image of the city centre of Seoul. Together with the Seoul’s Municipality, local NGO’s, landscape teams and city advisers, MVRDV was deeply committed to accommodating the biggest diversity of flora into a strictly urban condition. The park is populated by 16 small pavilions such as cafes, shops, exhibitions, gardener’s pavilions, trampolines, foot bath, stage and children’s theatre and information centre as well. They enhance the experience of the users, boosting the park with extra fun activities that engage the city on a cultural and commercial level. Multiple stairs, lifts, bridges and escalators connect the city to the new park, rebounding it to the adjacent urban fabric.

The project was able to metamorphose the landscape of the city in two steps. Firstly, it is an enormous public domain for pedestrians use in a city dominated by car usage. Skygarden is the first step in creating pedestrianised routes and neighbourhoods to the centre and its railway station. This linear park is a place where people can slow down their pace in the heart of the city, they are invited to sit down, look around, admire the different trees and plants and meet their fellow citizens. The abundance of varied local vegetation species, presented in (Korean) alphabetical order, gives the park a special feature as it changes every season. A linear park that also serves as a sculpture garden, in which trees and plants are pieces of art, placed on a pedestal to be studied and admired. At night, trees are illuminated as bright stars in a dark blue sky.

Skygarden changed the city’s urban landscape in itself and the perceptions of it. Walking on the former highway, climbing up to a 17m+ level, visitors experience views that were not available before, changing the mental map of the city. And where the bridge lands, the public space has changed from traffic island and grey streets into micro parks and pedestrian streets with terraces and café’s.

Moreover, the Skygarden, located in the heart of Seoul is a plant village, an ever-changing landscape that accommodates the biggest variety of Korean species into a public park, gathering 52 families of plants including trees, shrubs and flowers displayed in 645 tree pots, collecting around 160 species and sub-species. In total, the park will include 24,000 plants (trees, shrubs and flowers).

Skygarden not only adds public space for pedestrians but overall, it also to connect and breathes new life into public spaces in the neighbourhoods around.

How many species of plants? 228 Species
How many families? 50 Families arranged according to the Korean Alphabet
How many plants? 24,085 Plants

Which city architect were most responsible? Young Joon Kim

What proportion of the 60m budget was paid by public subsidy? 100% purely from Seoul Metropolitan Government.

How are the plants watered: Water supply and drainage integrated into the flooring