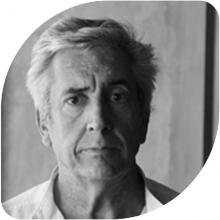 João Nunes is a Landscape Architect with a great passion for drawing and understanding the processes of the world. In 1985, he founded the PROAP studio which, according to his philosophy, approaches landscape themes in a broad sense, intervening in the processes that the project integrates, using inputs from various disciplines and considering the landscape as a process in continuous transformation. The professional activity and didactics intertwine and enrich each other, contributing to the development of new lines of research and experimentation. Visiting Professor at several international universities (Harvard GSD, UPenn, OSU, Pamplona, Versailles among others), he is Full Professor at the Academy of Architecture of Mendrisio and member of several scientific committees. In 2013 he was awarded the 1st Chair of Excellence "Adalberto Libera". In 2010 he published the monograph "PROAP - Arquitectura Paisagista" (Note), which summarizes the first 25 years of the studio, and in 2011 is co-author of "Lost Competitions" (Proap Editions). Projects developed by Proap have received several national and international awards and have been several times finalists for the Prize "Rosa Barba" at the Landscape Biennial of Barcelona.