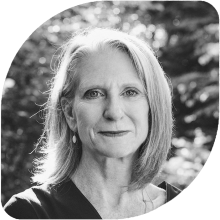 Kathryn Gustafson was born in the state of Washington, USA, and was educated at the University of Washington in Seattle, the Fashion Institute of Technology in New York and the Ecole National Supérieure du Paysage in Versailles where she received her diploma in 1979. Kathryn Gustafson brings over 25 years of distinguished practice to Gustafson Porter. Her award-winning work includes a widely known series of projects in France, and recently acclaimed projects have ranged throughout Europe, North America, and the Middle East. Kathryn's design work has been predominantly civic, institutional, and corporate. Projects have ranged in scale from a tenth of an acre to 150 acres, including parks, gardens, and community spaces. Two partner offices, Gustafson Porter in London and Gustafson Gutrie Nichol in Seattle, continue to evolve the design approach of Gustafson's work into new contexts of time, culture, and nature. Kathryn Gustafson is an Honorary Fellow of the Royal Institute of British Architecture and a medalist of the French Academy of Architecture. She is the recipient of the ASLA Design Medal, the Chrysler Design Award, London's Jane Drew Prue and the Arnold W Brunner Memorial Prize for Architecture 2012.