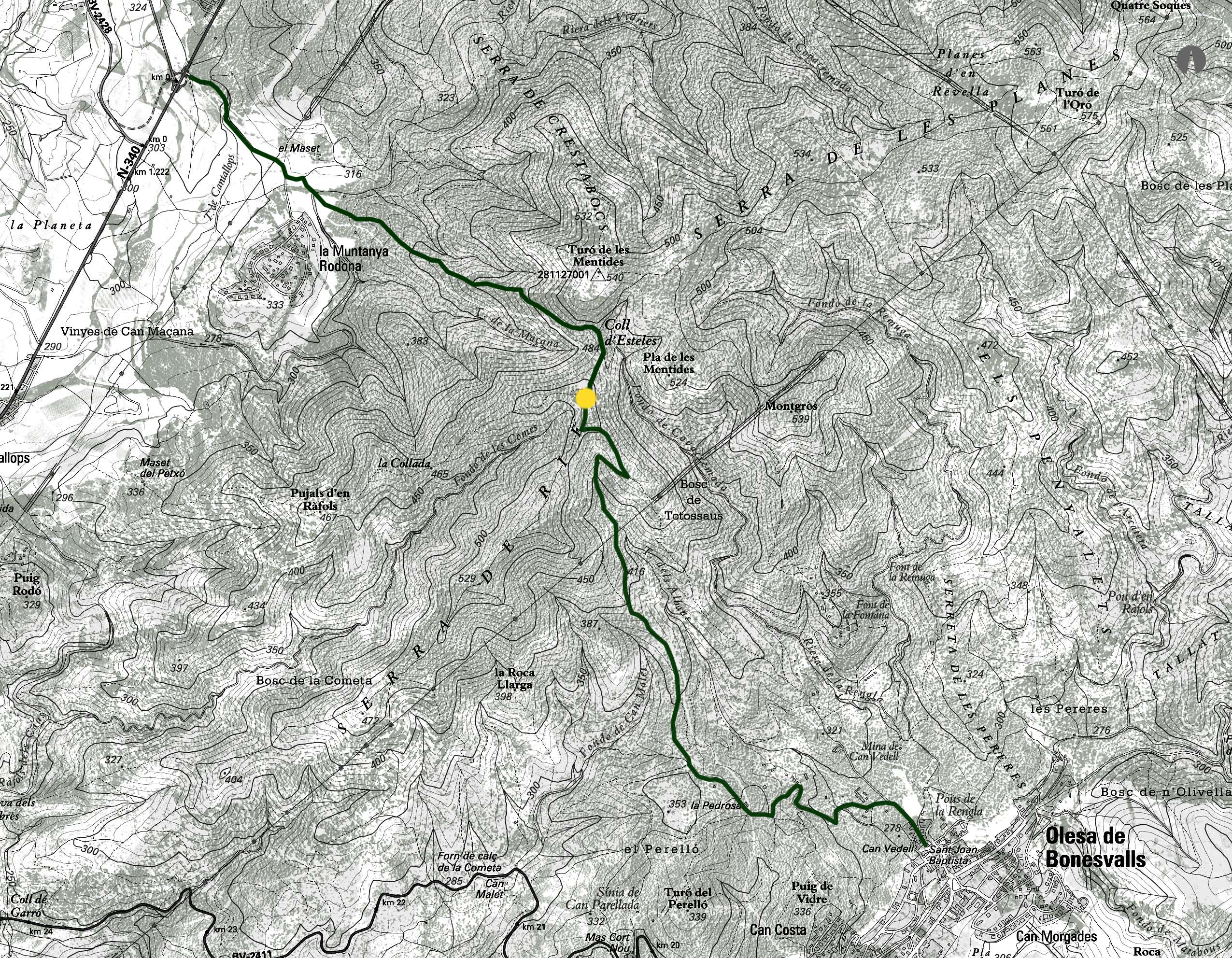 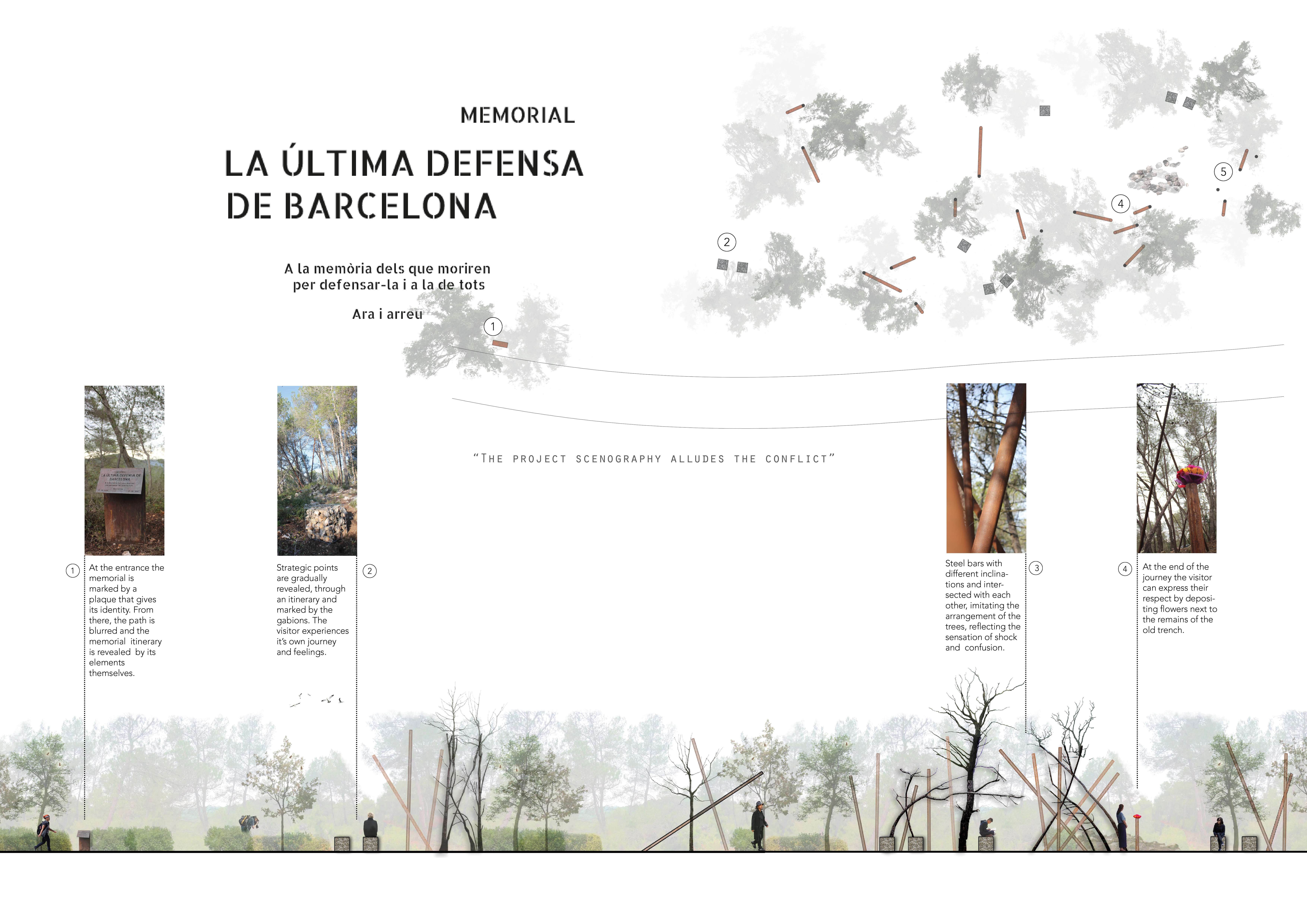 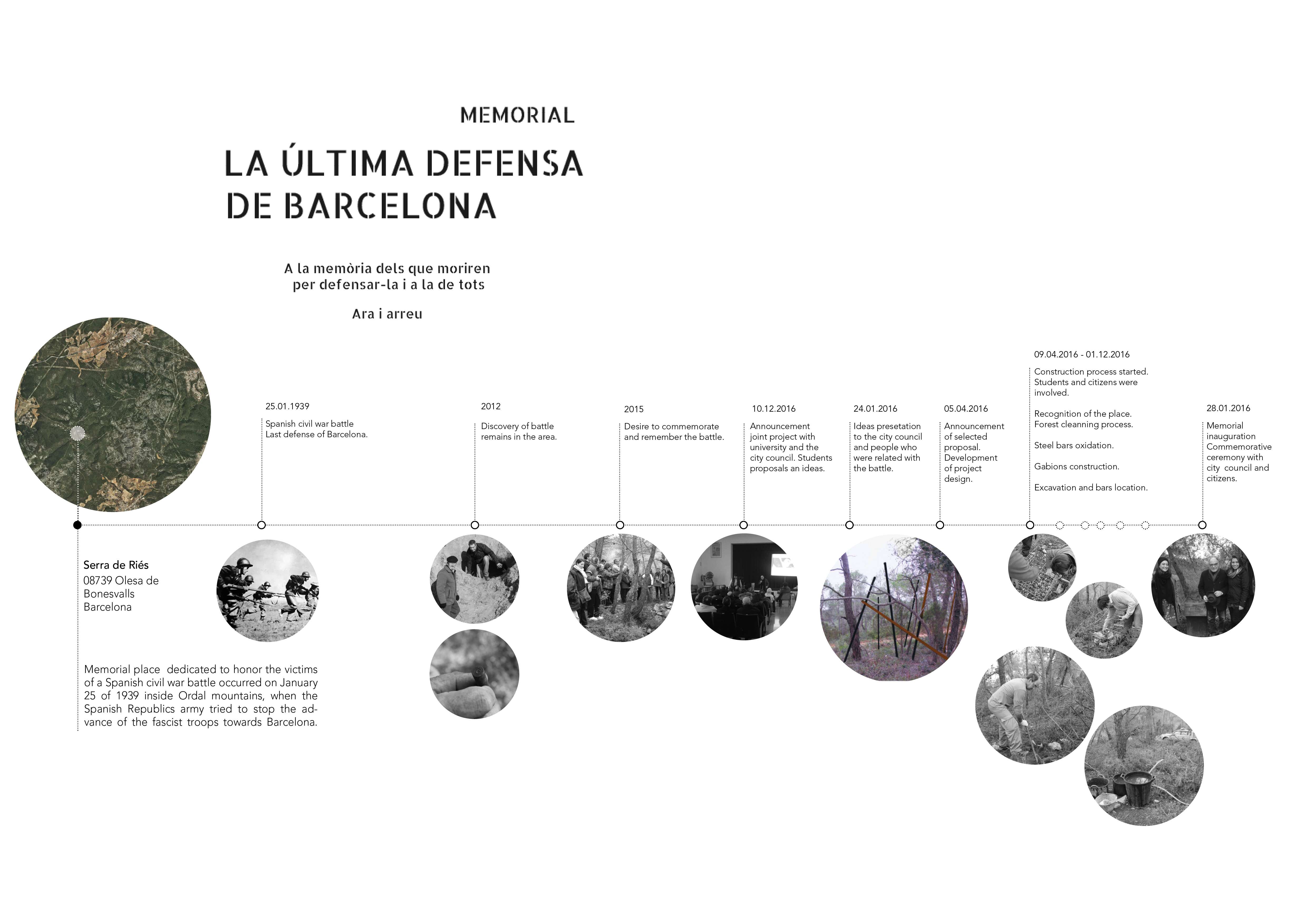 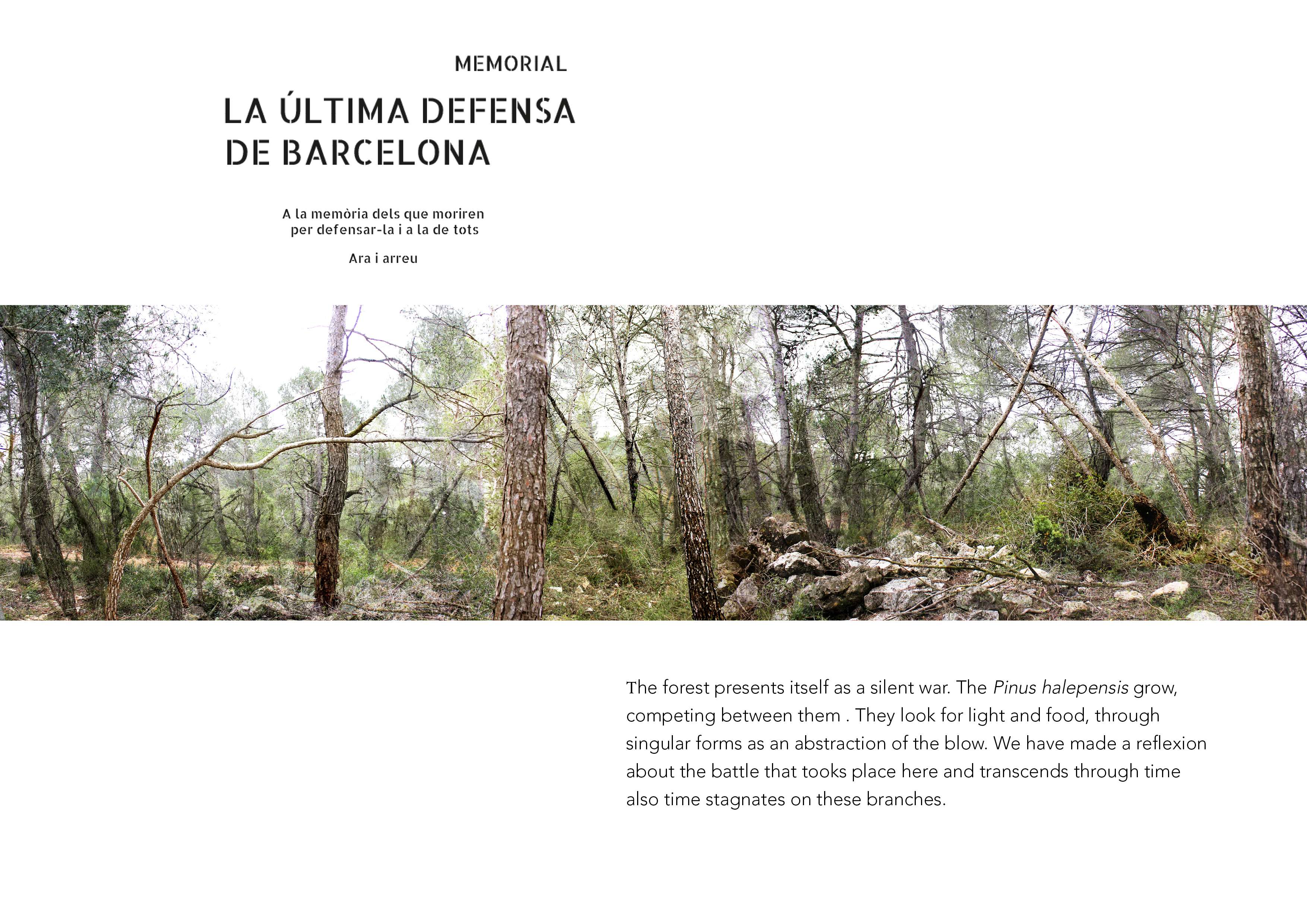 The Last Defense of Barcelona

OBJECTIVE OF THE PROPOSAL

The project of the Memorial L 'Ultima Defensa of Barcelona aims at remembering the heroic and abortive attempt of the army of the Second Spanish Republic to stop the fall of Barcelona before the advance of the Franco’s  army; attend a historic claim to dignify all the Sierra of  Ries, promoted by the Centre d’ Informacio de l’Ultima Defensa de Barcelona CIUDB  (The Information Centre of the Last Defence of Barcelona), to pay tribute to those who were killed in the battle; and finally, denounce the horror of the wars.

The chosen place is a gentle hill covered by a forest of Pinus halepensis, in the Sierra of Ries, a limit of the townships of Subirats and Olesa de Bonesvalls, where vestiges of the battle have been found and remains of trenches are still preserved.

Through a first reading of the forest, there is a pronounced competition between existing pines that in search of water and sun have reached sinuous forms, appearing in themselves, the expression of combat. The perspectives are chosen where the way in which the trees grow is crossed. Knowing that they really are not, the interesting thing about the project is the point of view. This intention is established by placing seat areas in each of the action points so that the visitor can perceive and be a participant in this "shock". To enhance and intensify the sense of struggle and conflict a series of steel bars with varying inclinations, are installed which intersect each other, simulating the movement of the trees themselves.

The beginning of the memorial is marked by the plaque that identifies it, L 'Ultima Defensa de Barcelona, to the memory of all now and everywhere. The memorial is an open access. However, there is an initiation itinerary that leads to the trench and when this is followed the forest is transformed into place. Spaces of reflection are generated, where the spectator can observe the conflict that occurred and pay tribute if desired. These three areas of action are connected visually.

The organization of the space is minimal and subtle and it is achieved through a distribution of the 18 steel corten bars (600 cm, diameter 8), made in situ, using  Alain Roger ’s terminology so that the memorial is landscape and landscape is memorial. Just as the place is history and history is the place. Five gabions with stones of the place and a cut steel bar where the tribute flowers are deposited build the memorial.

ASSESSMENT OF THE FINISHED WORK

The work, the field study and the social approach showed the existence of open wounds and opaque stories, which were silent for years. The project focuses on how to transmit the experience of a distant conflict that took place in the context of a cruel civil war, which divided a country. It seeks to move from the simple and the day to day. It does so by Introducing the minimum elements, in a sensitive way 18 corten steel bars, that orchestrate the story of the tragedy in the dialogue with nature.

The project is strongly linked to the collective of its landscape. Honoring, remembering and alerting are very present parameters throughout the process. Attending the opening of the memorial and the anonymous flowers that accompany it have encouraged us to think about a good link between the Memorial and its human and social environment.

The academic origin of the Memorial L 'Ultima Defensa de Barcelona (The Last Defence of Barcelona) establishes the coordinates of the project as well as the condition of expressing the intangible and the search for an austere and sustainable beauty.

The pedagogy went further and the project was approved by the City Councils. The self-construction phase was a slow process with a few resources. The participation of all the parties which were involved was key. This process brought the power to experience humble ways of creating in nature as well as a direct, physical and poetic experience of the material.