Rouen banks of the Seine 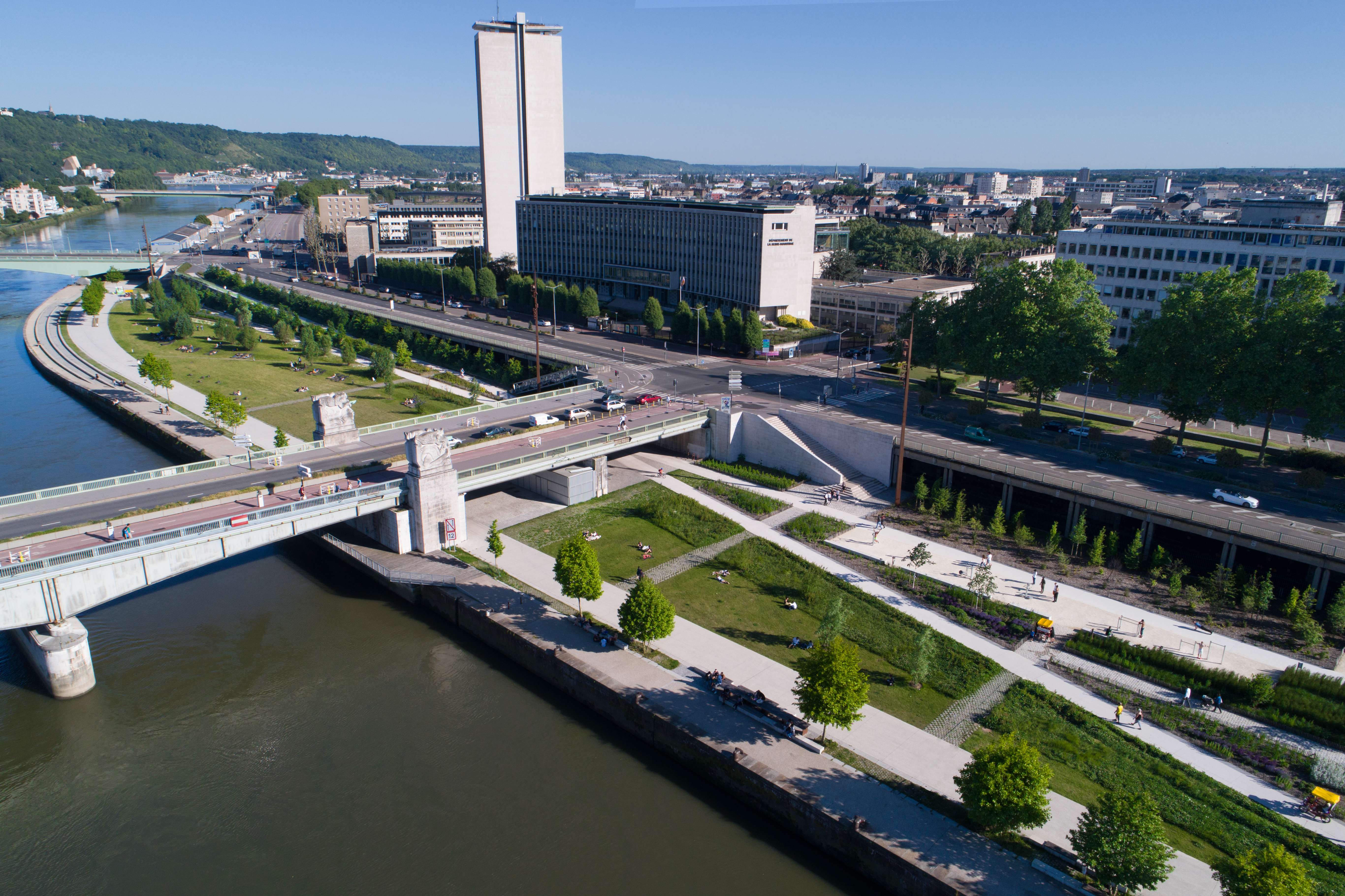 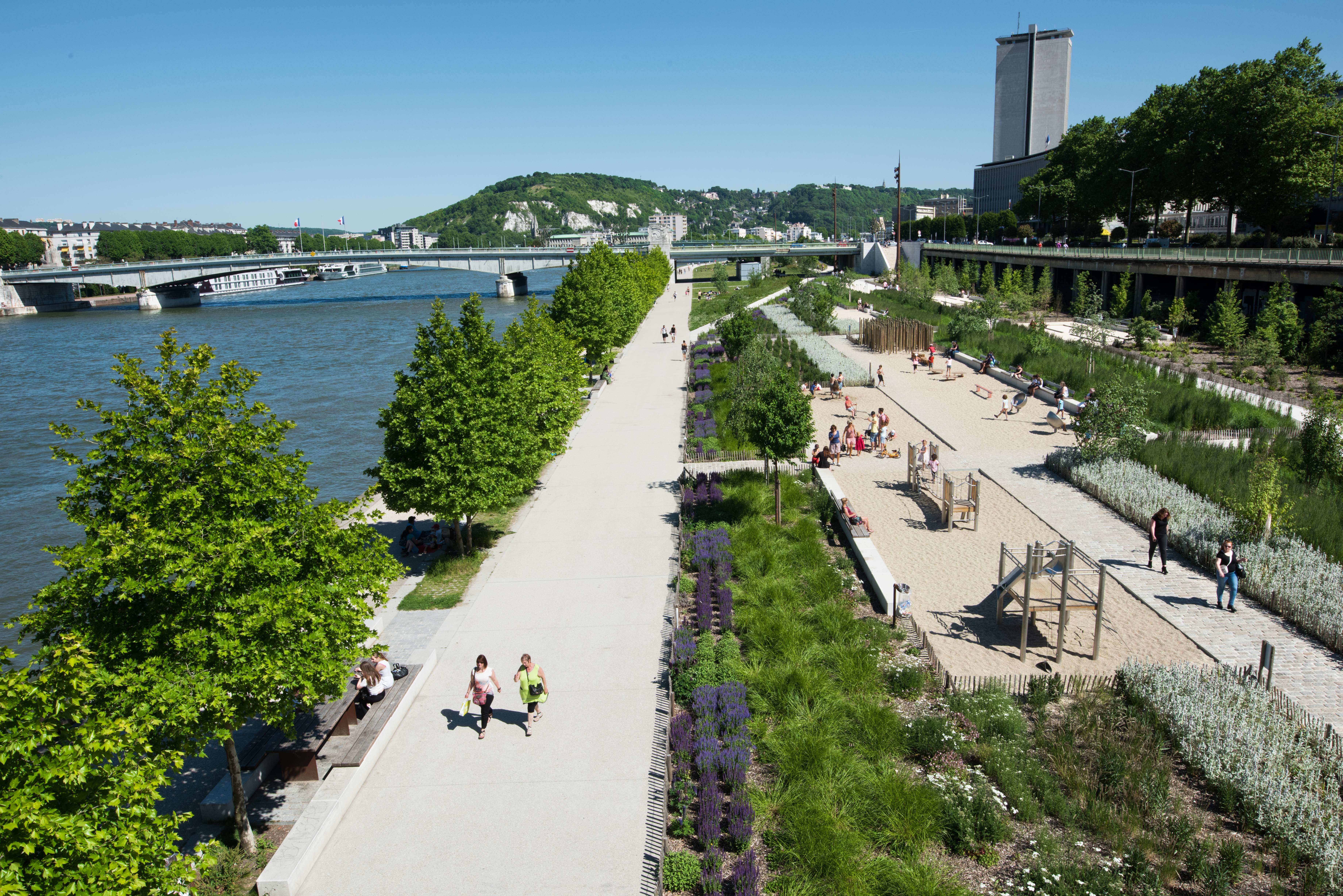 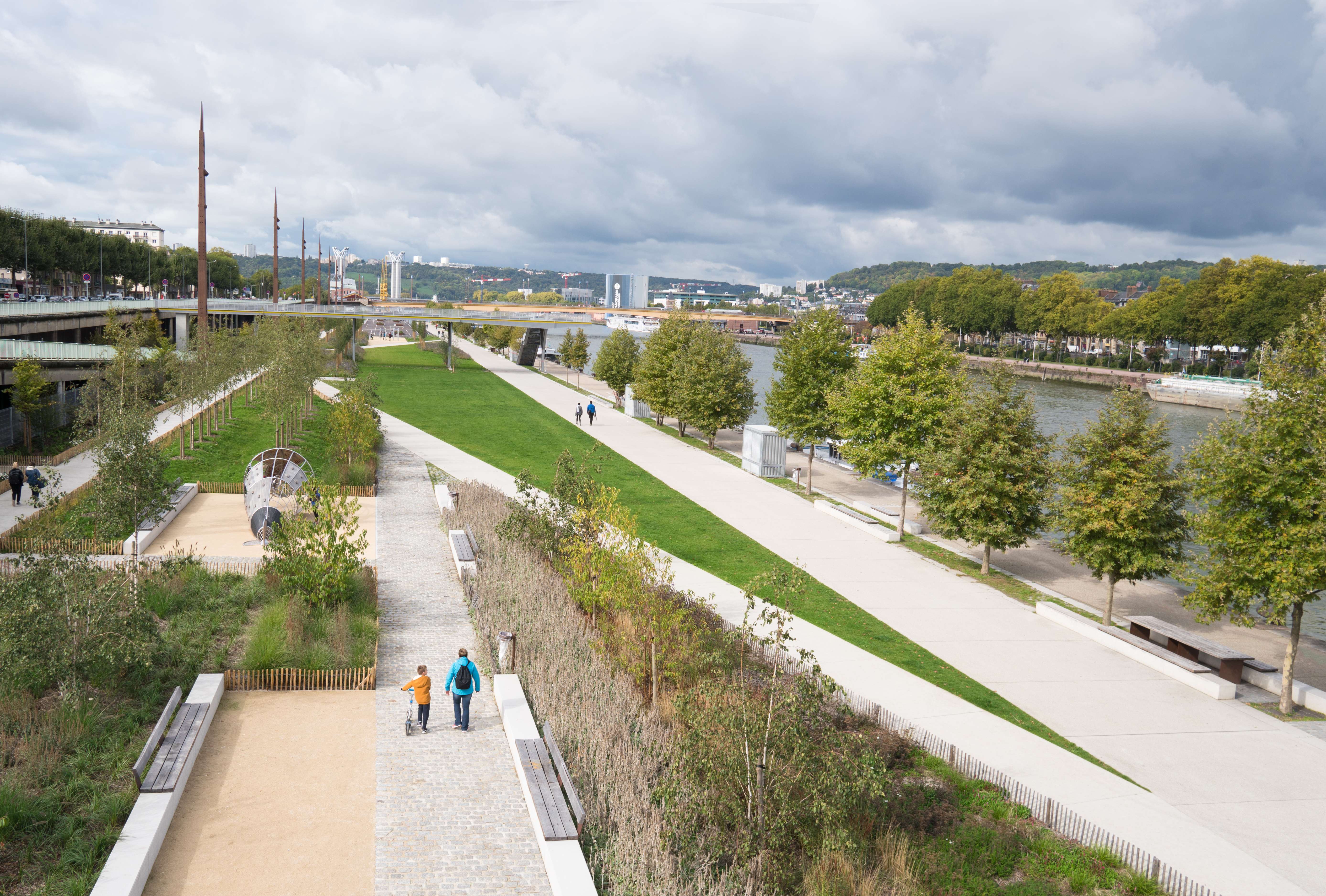 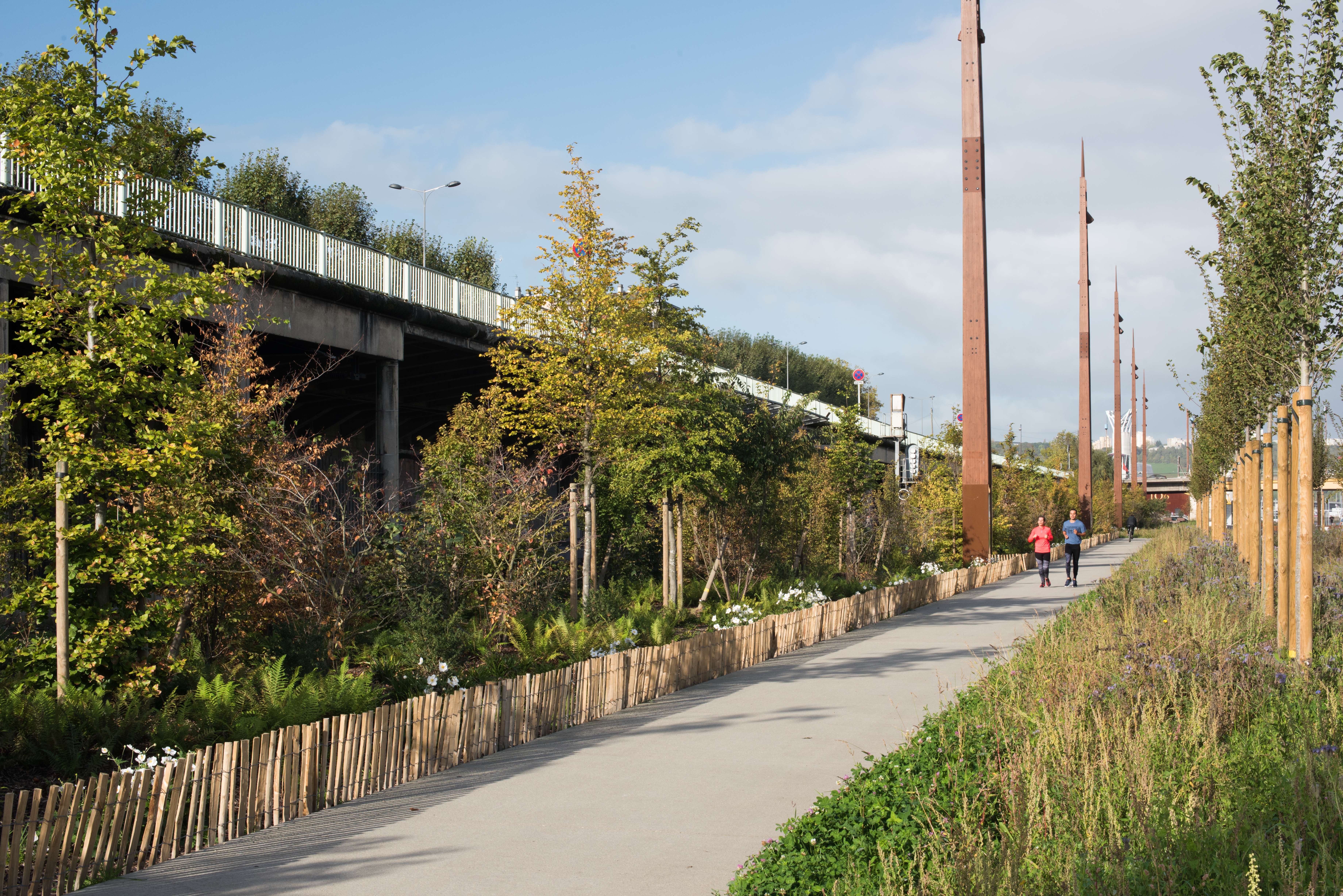 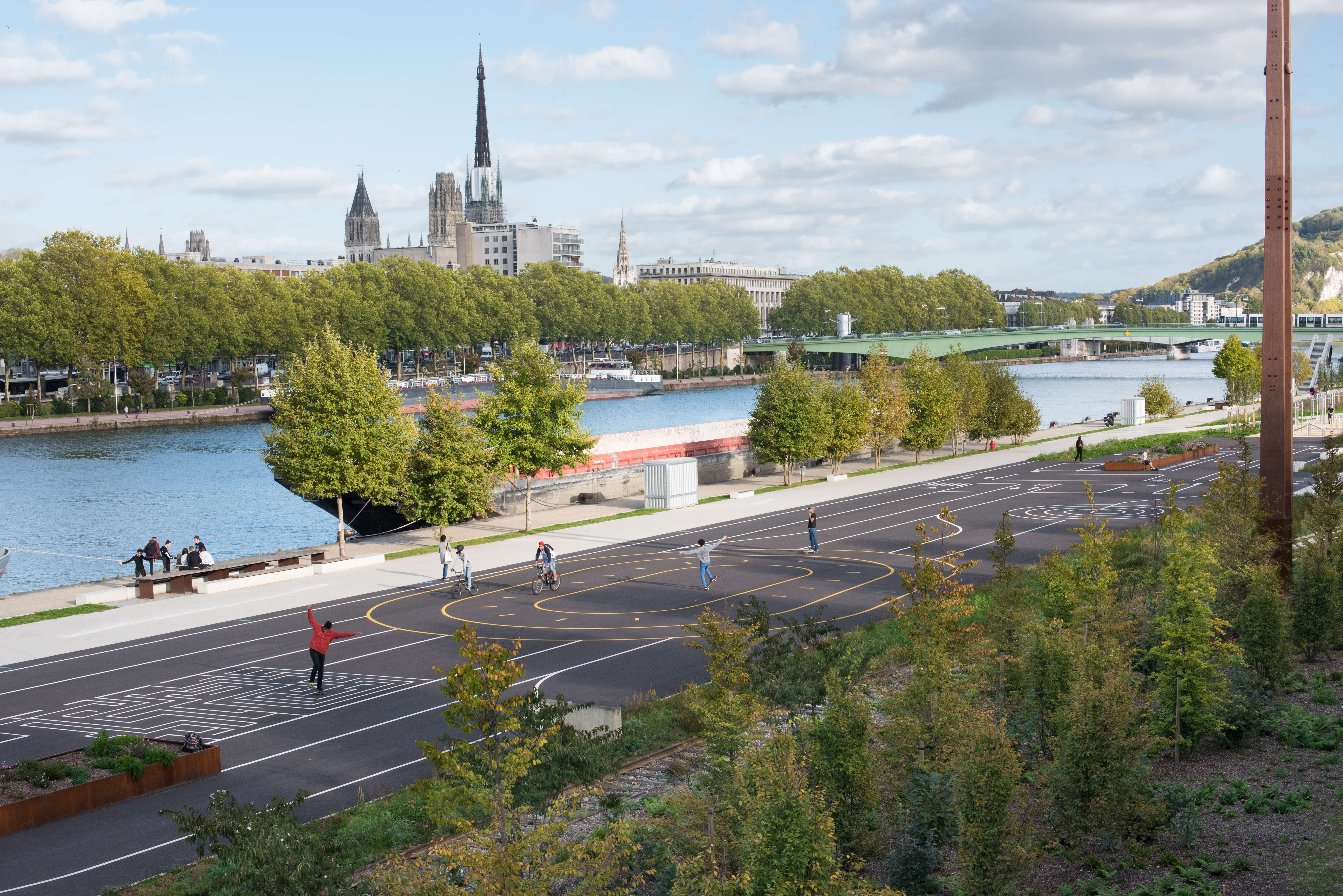 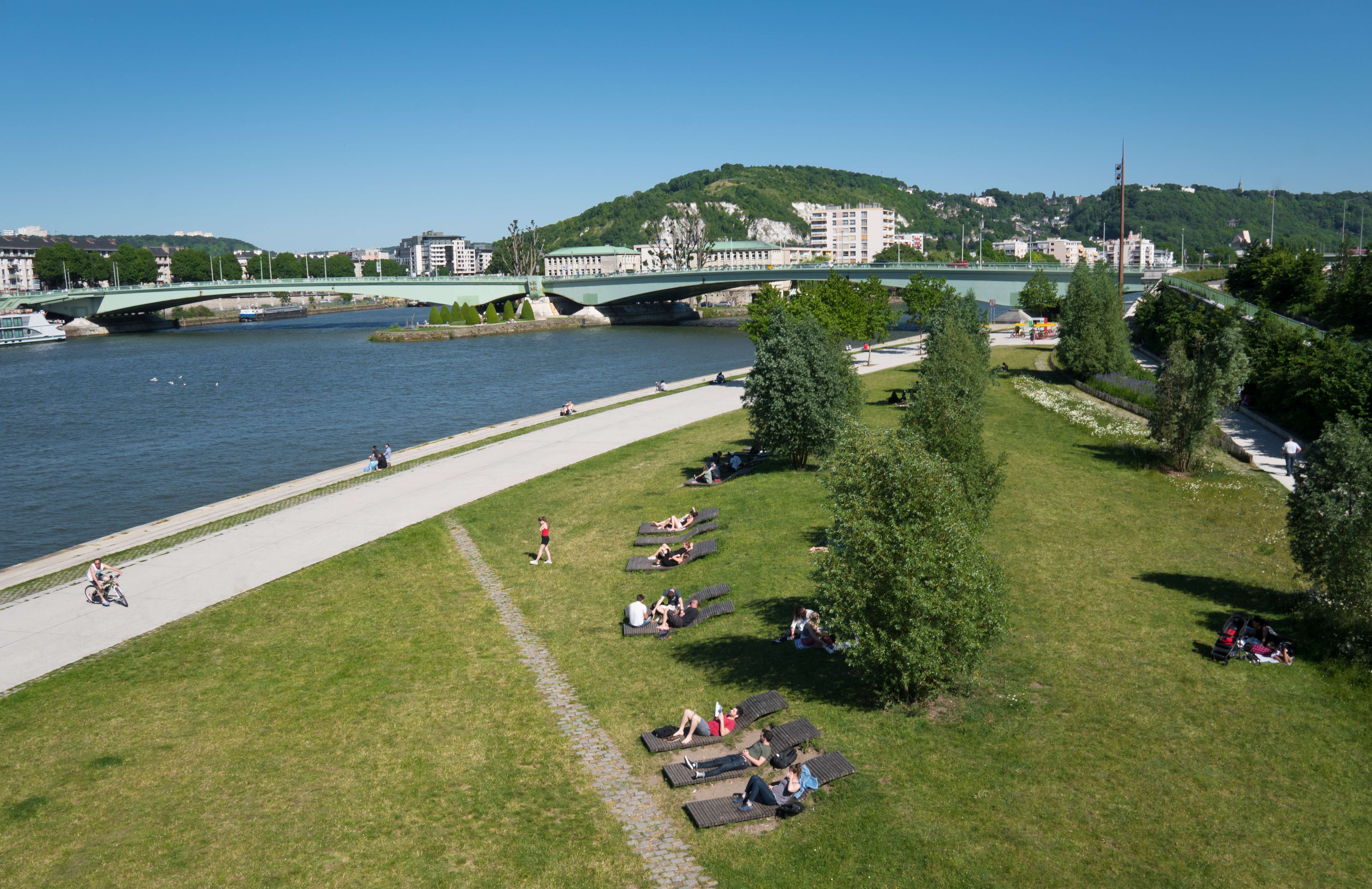 Rouen banks of the Seine

Rouen, banks of the Seine

In 2011, the city of Rouen launched a project management competition to develop the low quays on the left bank of the Seine, between Pierre Corneille and Guillaume le Conquérant bridges, and to connect the Rollet peninsula.

The low wharves ground had gone barren for the needs of the harbour. Then the activity withdrew, leaving a vast abandoned territory, and a partly polluted soil. Over the years, this large platform turned into a huge car park with no other use, except hosting the big Saint-Romain’s fair, one month a year.

However, the space being generous and the situation exceptional, both these assets made it possible to install a large riparian and linear park, to get back to a fertile ground, favourable to dense planting, and to integrate the geography of the Seine again, in front of the cathedral and Sainte-Catherine’s hill.

In Situ's project consisted in developing a real place of amenity for the people of Rouen, while reconnecting with the history of the site  : this landscape on the banks of the Seine which had become over the years industrial and monofunctional. The recapture of this territory allowed riverside residents to re-appropriate a vast stretch available in the city centre, and to regain proximity to the river.

One of the main challenges of the project was to deal with polluted soils : a principle of depollution by bacteria was implemented in order to reuse site’s soil and avoid its evacuation to landfill. A substantial provision in topsoil has also made it possible to reconstitute fertile earth. Trees take advantage of long linear plantation pits which favors their development.

From upstream to downstream, the project offers a three-sequences promenade describing the gradual transition from a river landscape to an industrial landscape :

- Upstream, Saint-Sever’s meadow opens out onto the Seine. Seating tiers allow for approaching water. The main challenge consists in setting up an opening towards the horizon  : a vast "impressionist" meadow that offers a view on the cathedral, the historic centre and the hills.

This riparian meadow is punctuated by loungers and willows that provide shade in summer. The vocabulary echoes the industrial past of the port : the old railway line is preserved and converted into a secondary path, a network of salvage cobblestones pathways criss-cross the site. The meadow is the place of all uses : idleness, ball games, picnic, solarium... but also cultural or sporting events.

- The Bargemen esplanade combines grassed areas, plantings and a mineral playful esplanade. Urban games : volleyball, basketball and football fields are disseminated between apple orchards, planted in bins like stored containers. Lines on the ground draw games : labyrinth, bike and rollerblade courses... In the middle of the meadow, the large jetty borrows an industrial vocabulary and gives access to the quayside, offering views on the opposite bank.

The quayside Promenade accompanies this route, as an extension of the work carried out downstream by Jacqueline Osty's workshop.

The particularity of this landscaping project also lies in the very close partnership that has been developed over time with the project owner, technical services and users. Thus, the project’s programme has positively evolved as studies and consultations were progressing : Saint Romain’s fair has been moved to another site on the banks of the Seine, lorries access road to the port has been moved and the car park has given way to vast pedestrian areas. Multiple new uses have developed and these renewed quays now host multiple events. This vast set of hybrid public spaces of nearly 6 hectares combines a port, an esplanade, a park and a promenade on a city scale. Simple and supple routes, an abundance of plants and the space left to free and open areas will allow an evolution over time. In Rouen, the low quays of the left bank have become a lively place and a formidable space of freedom again.