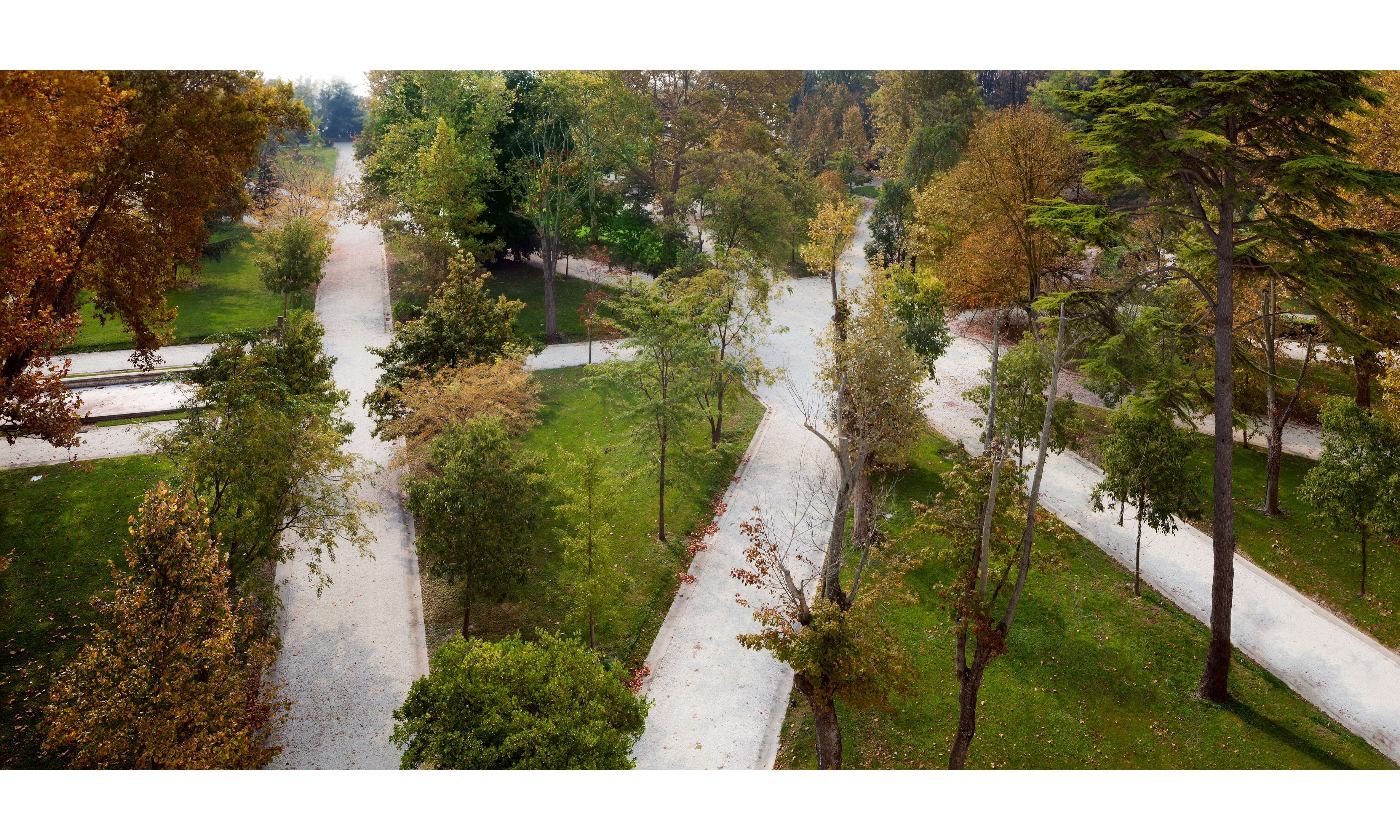 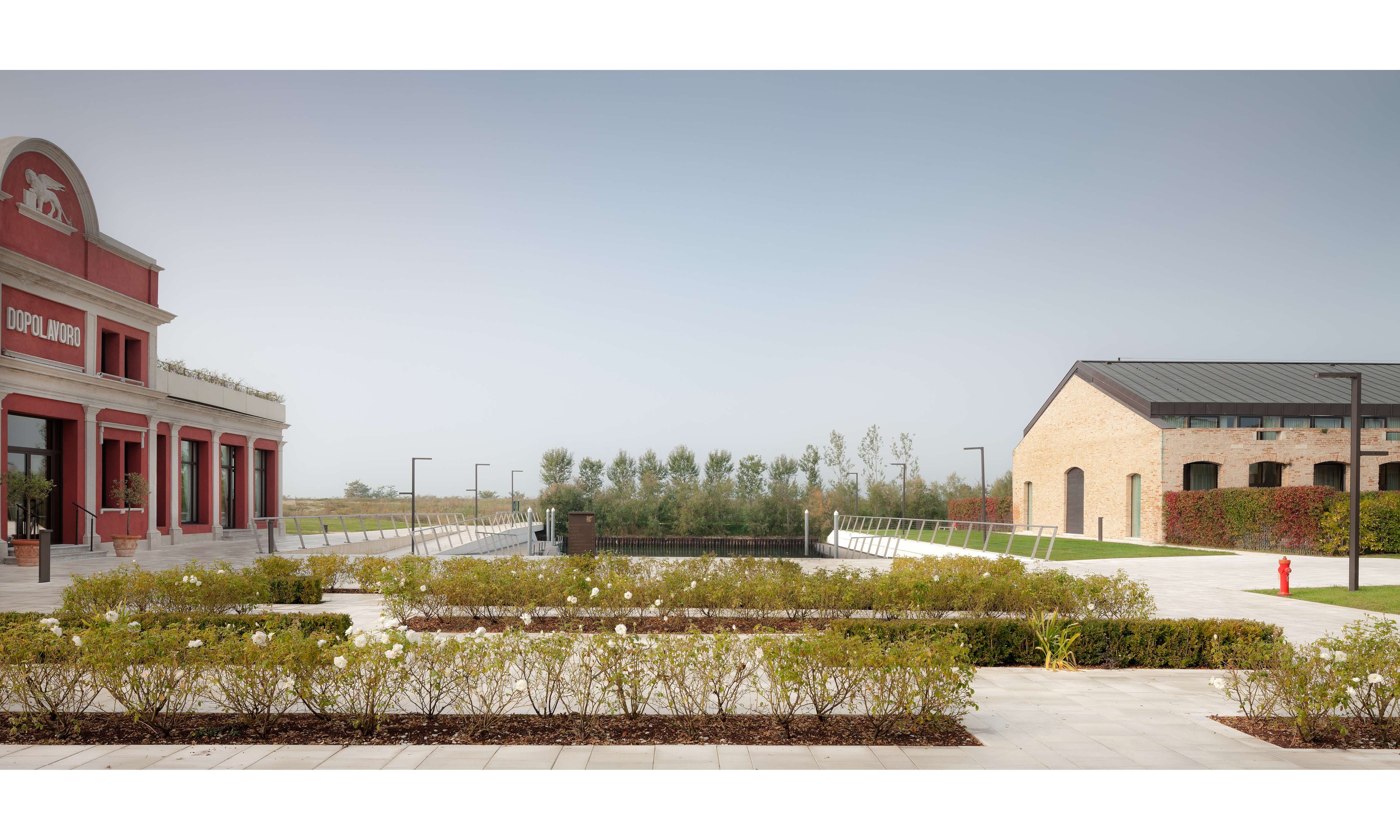 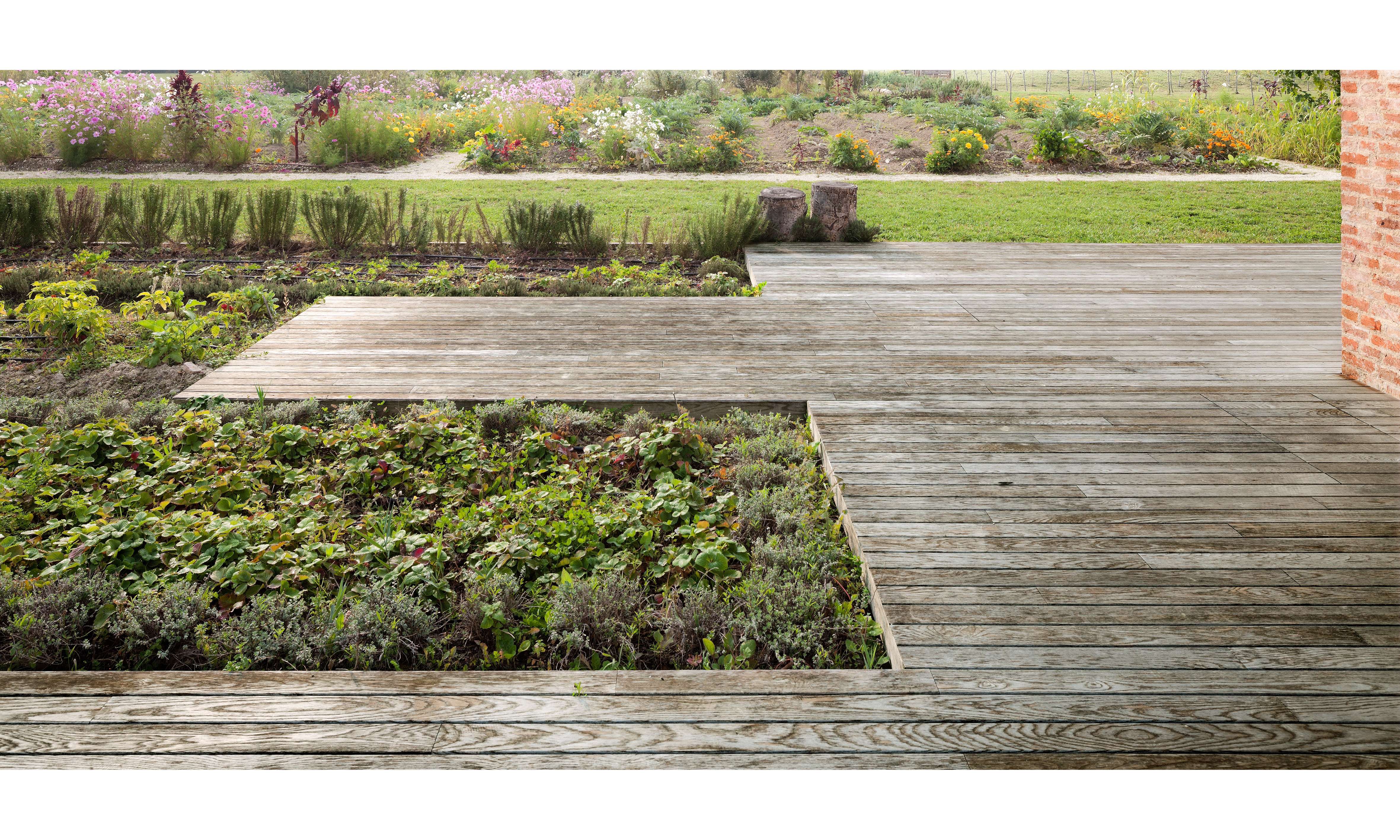 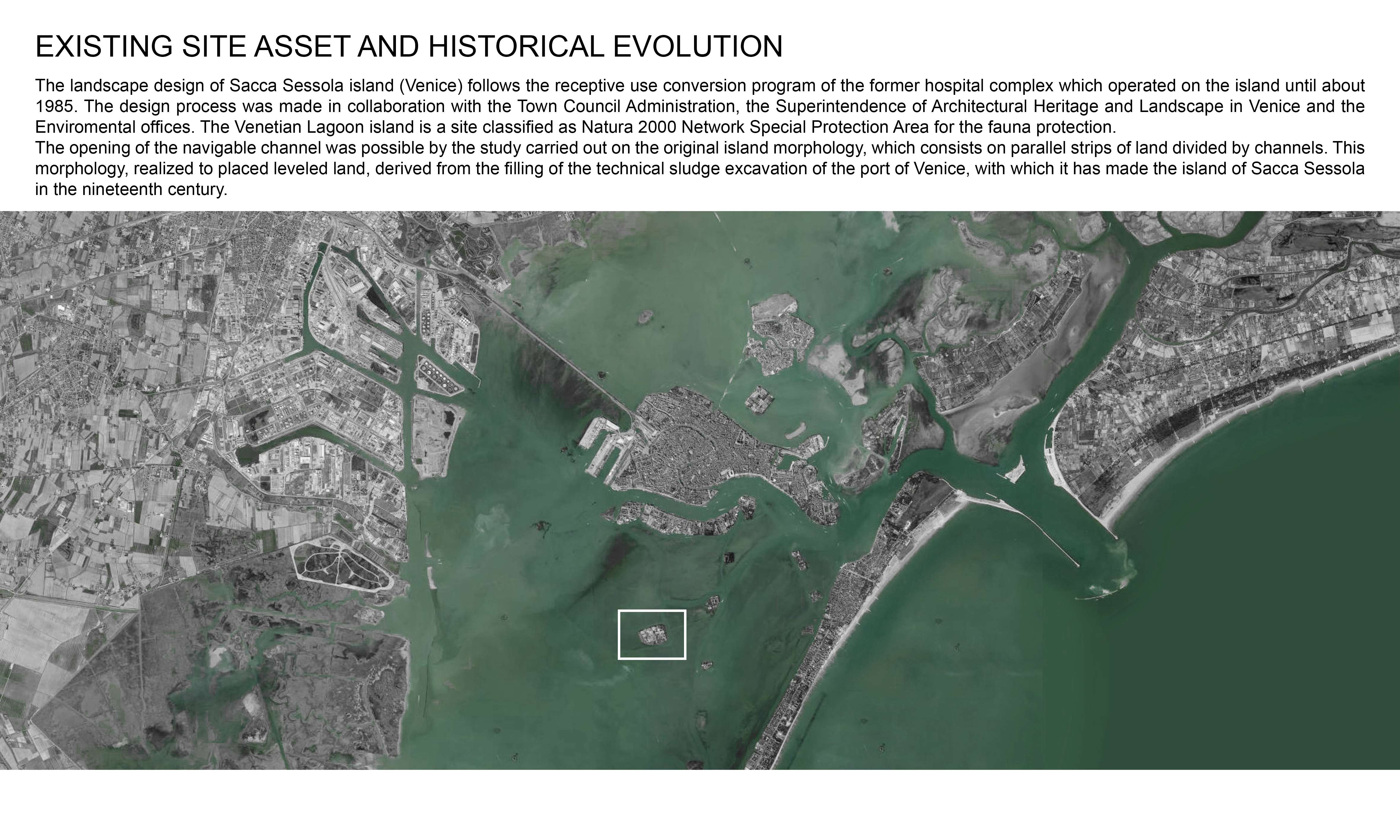 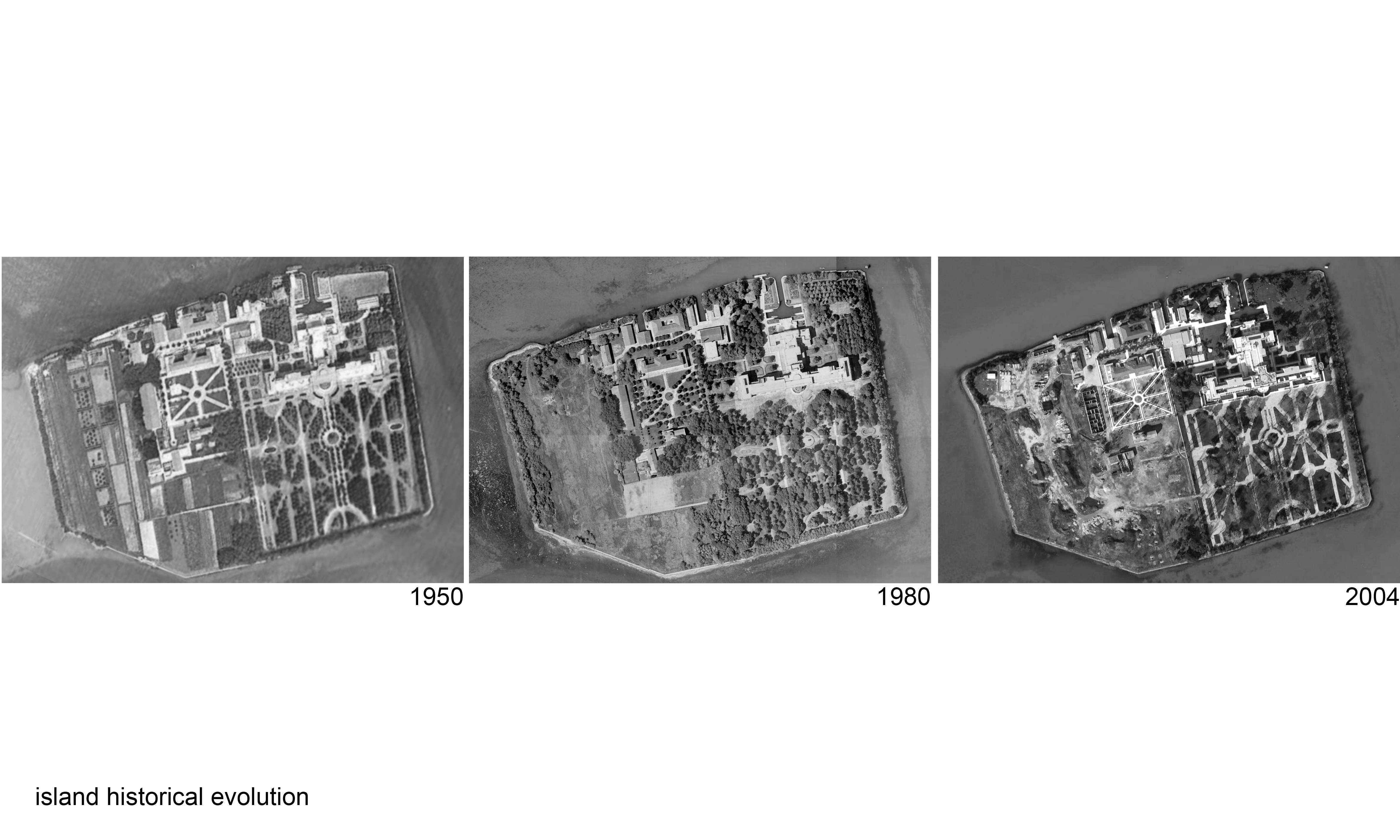 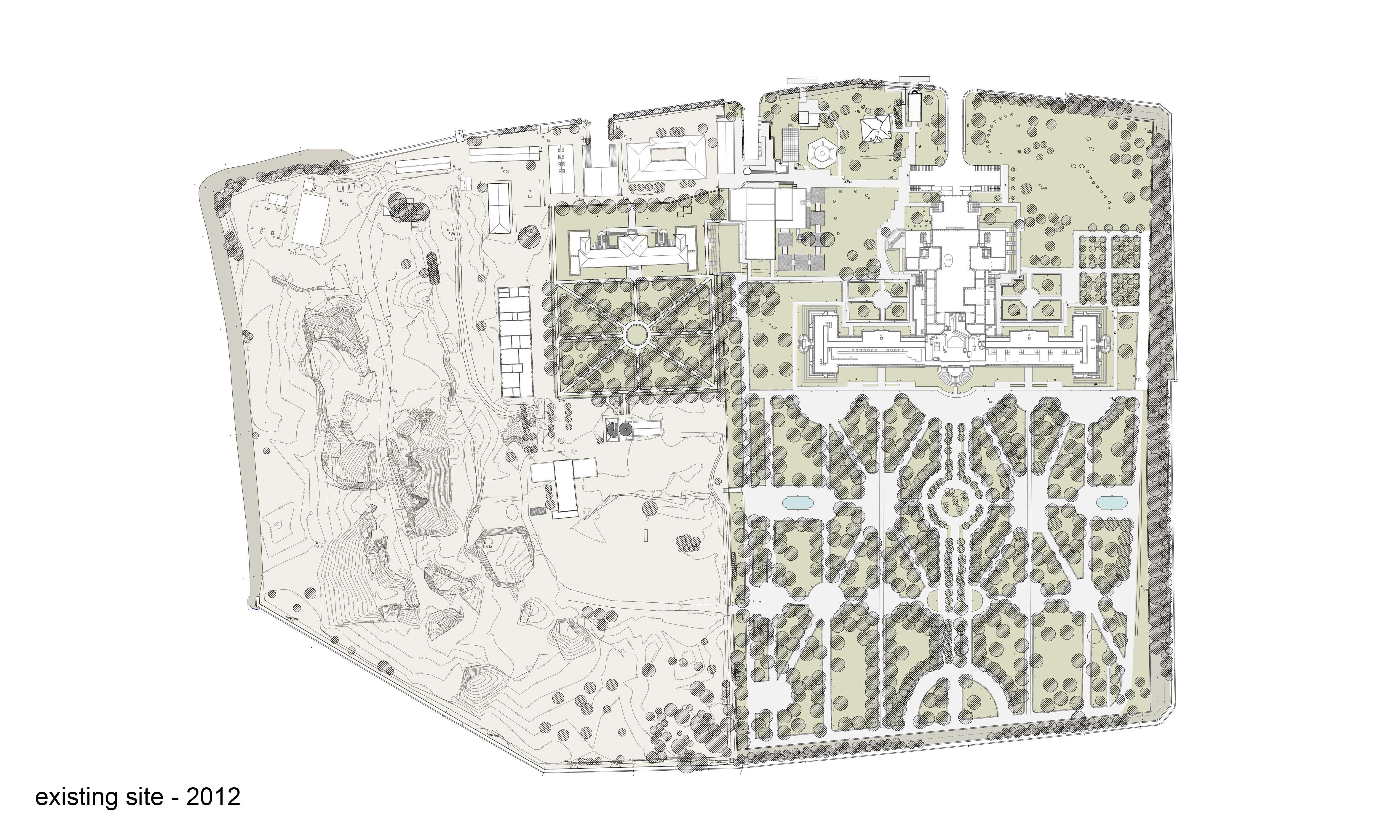 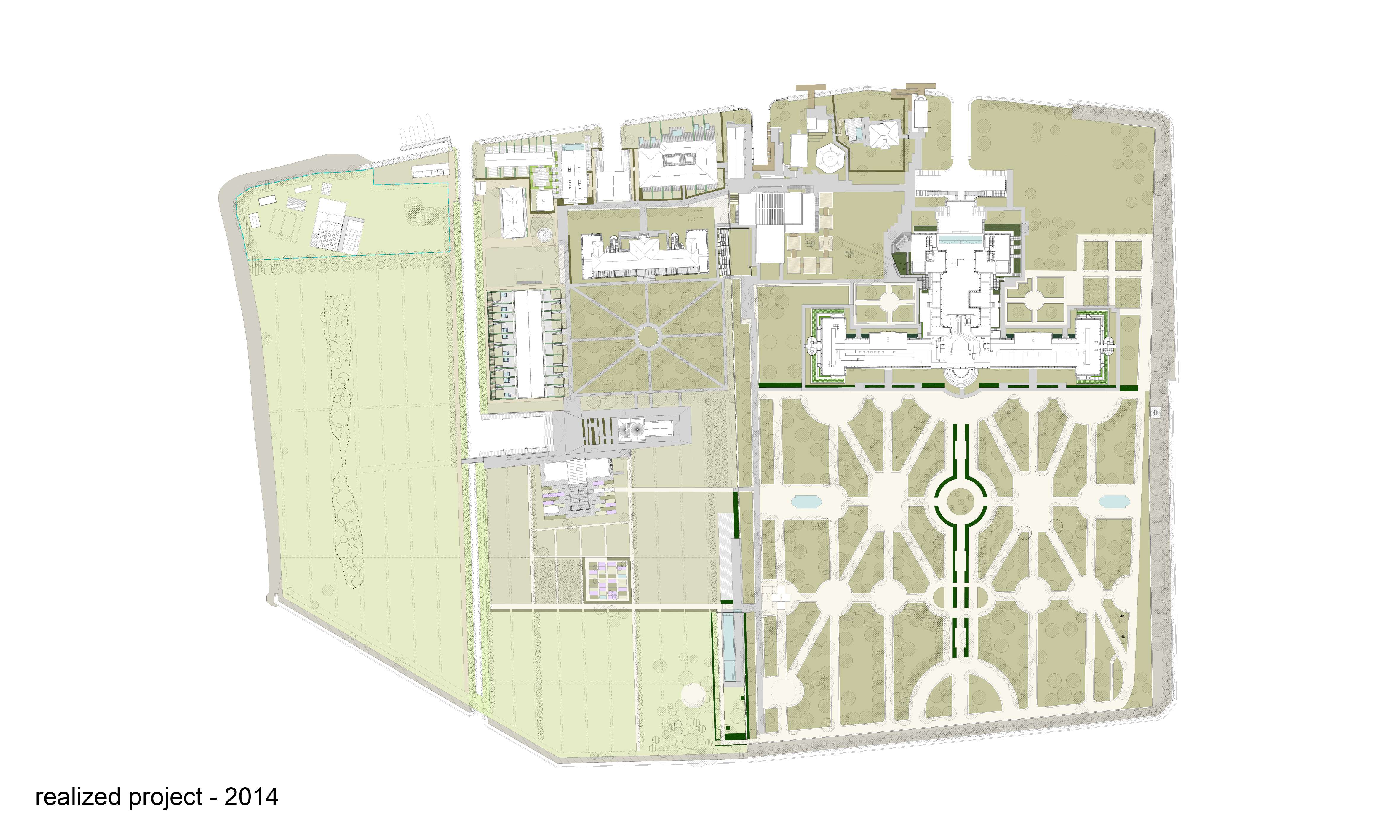 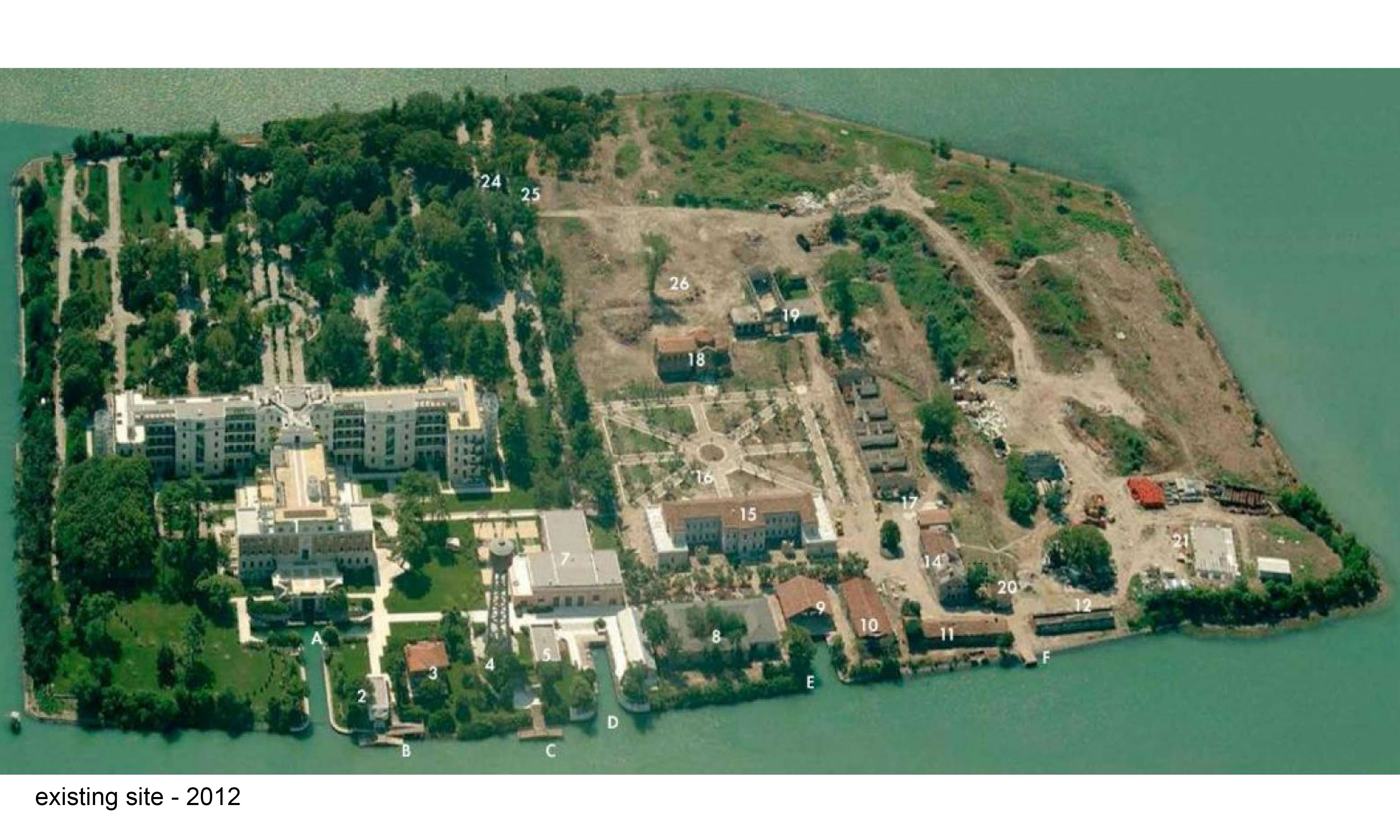 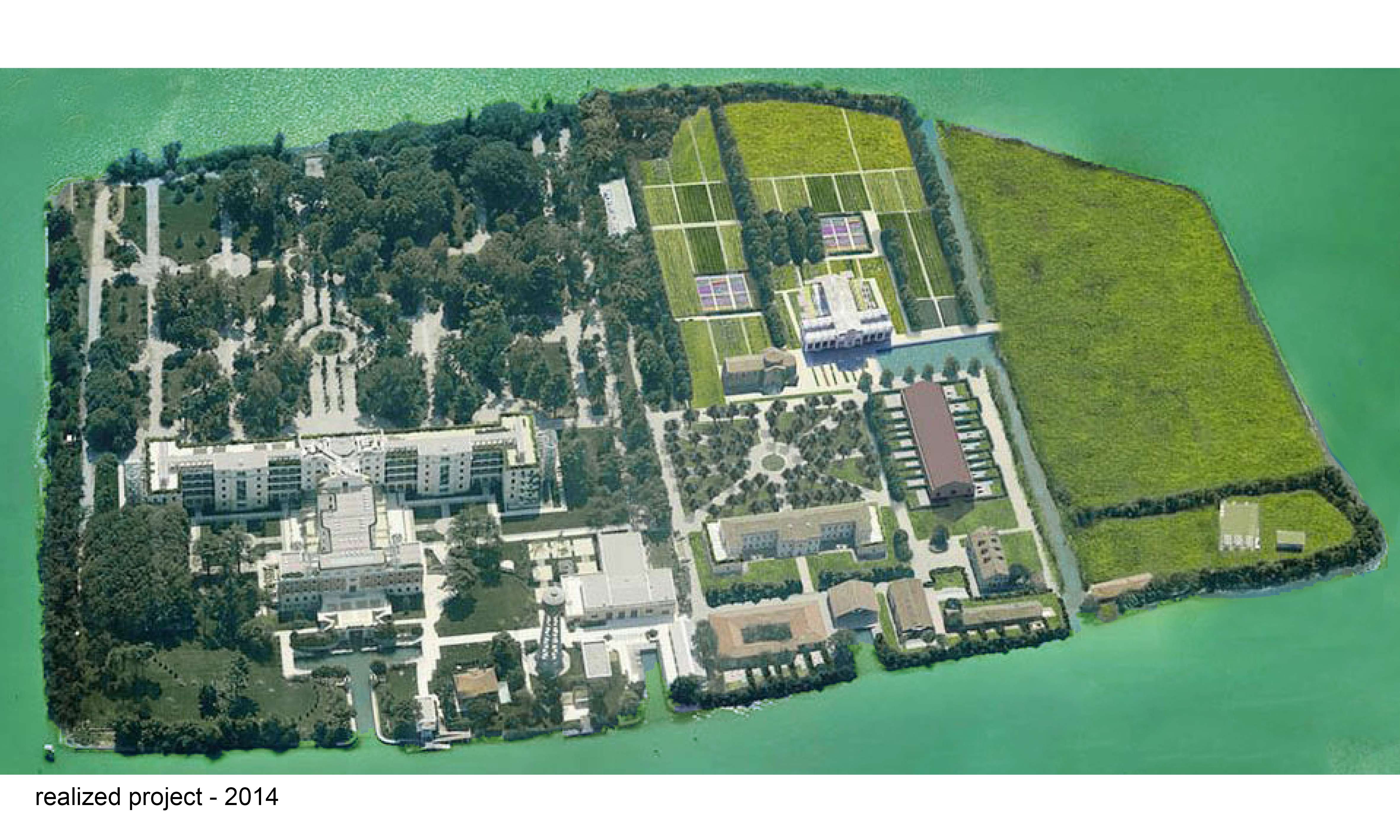 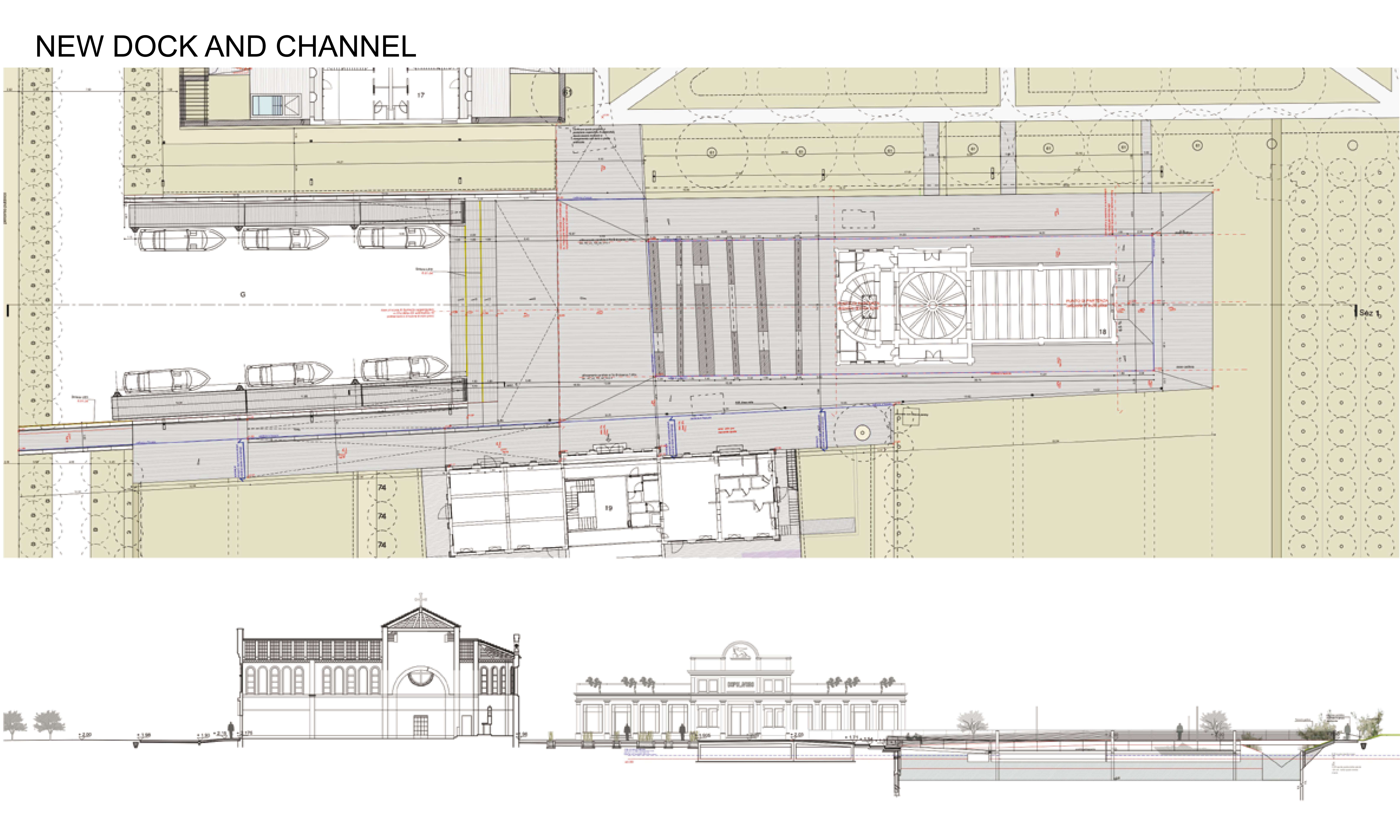 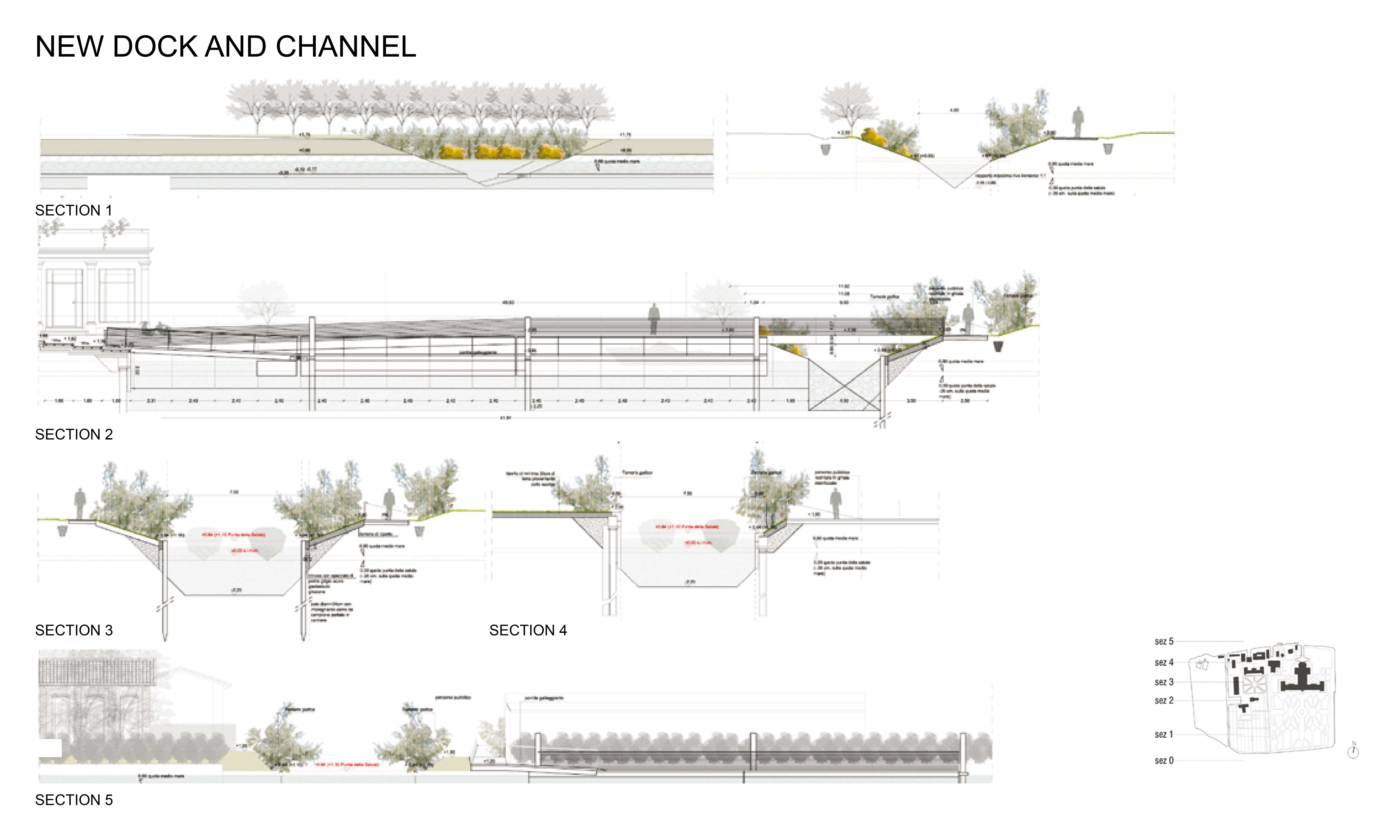 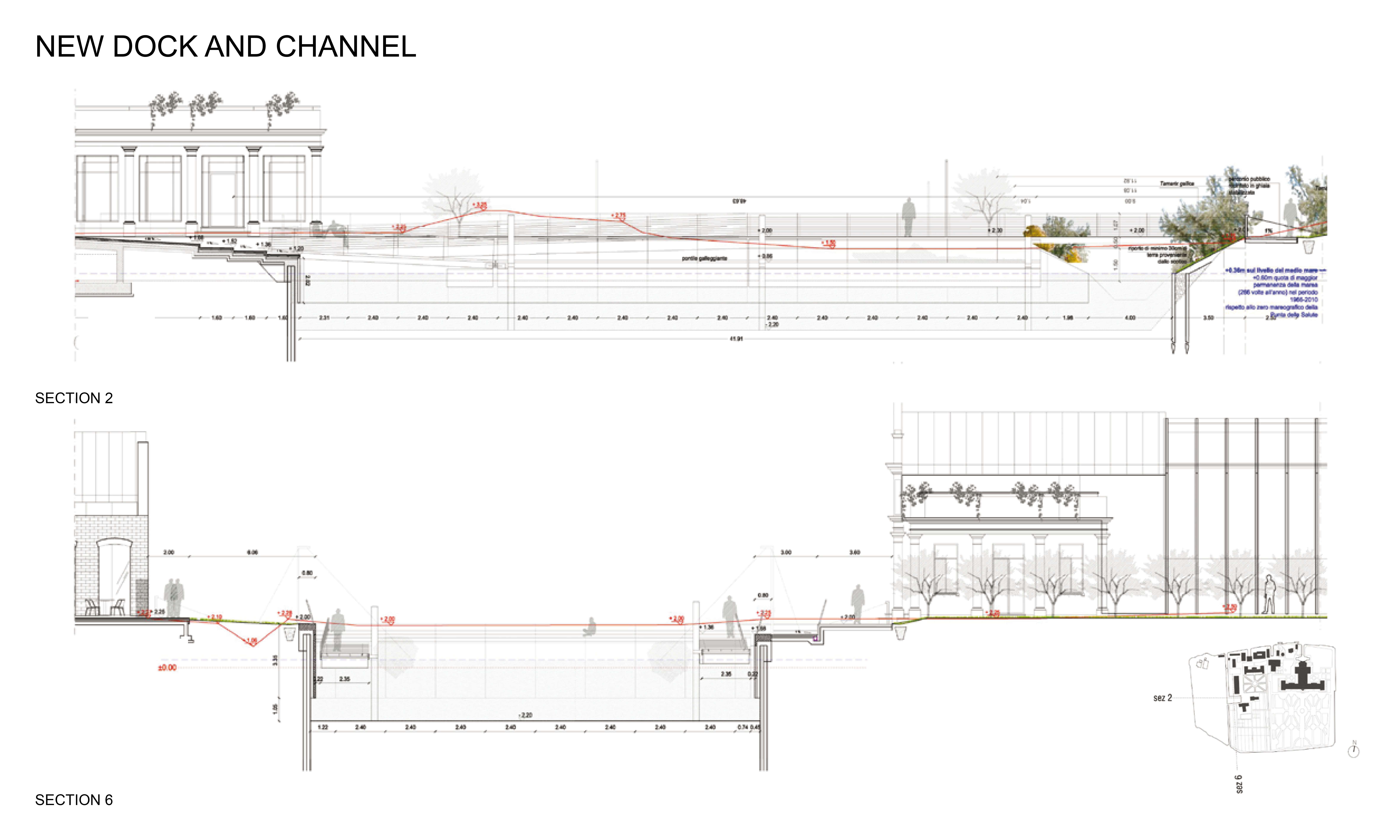 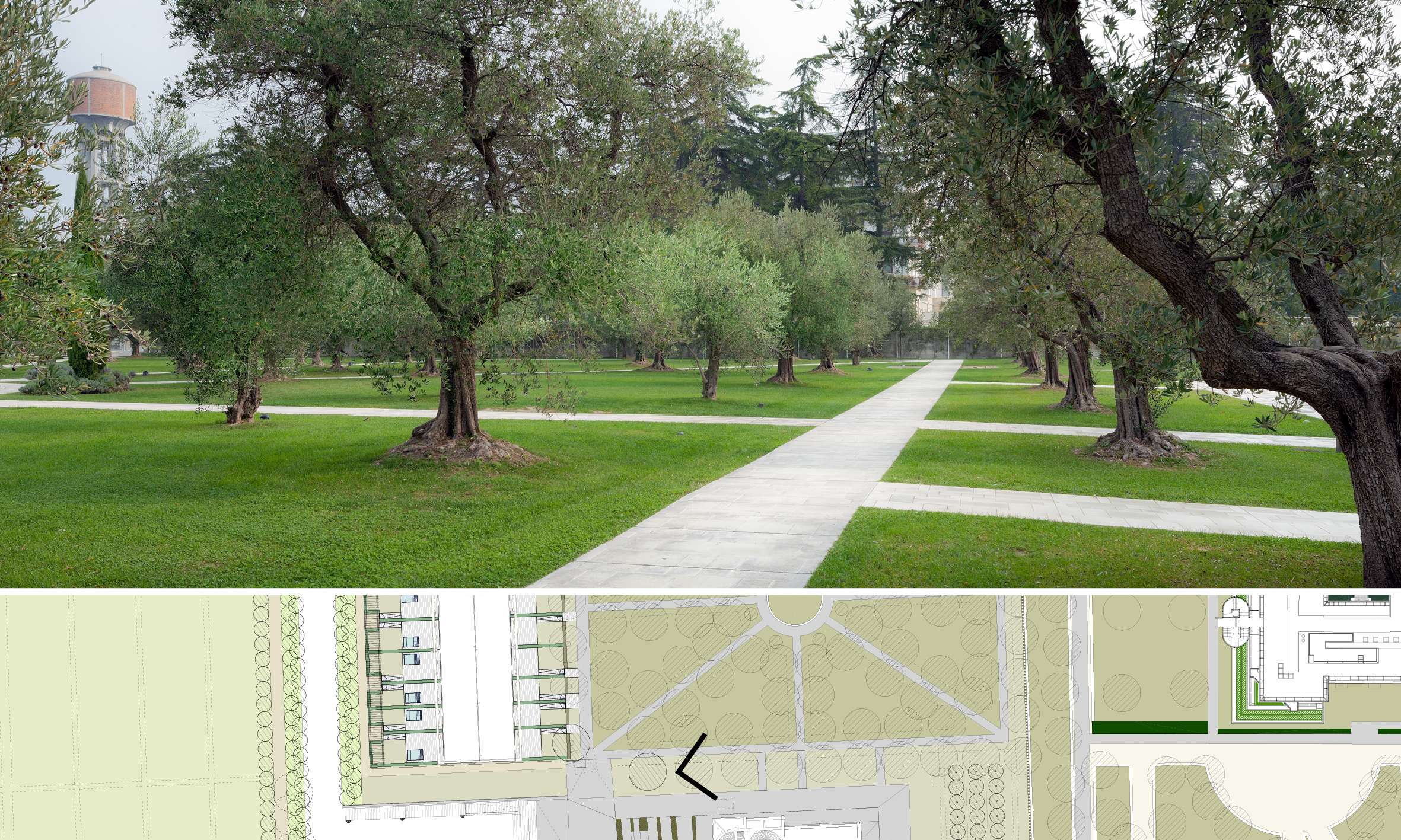 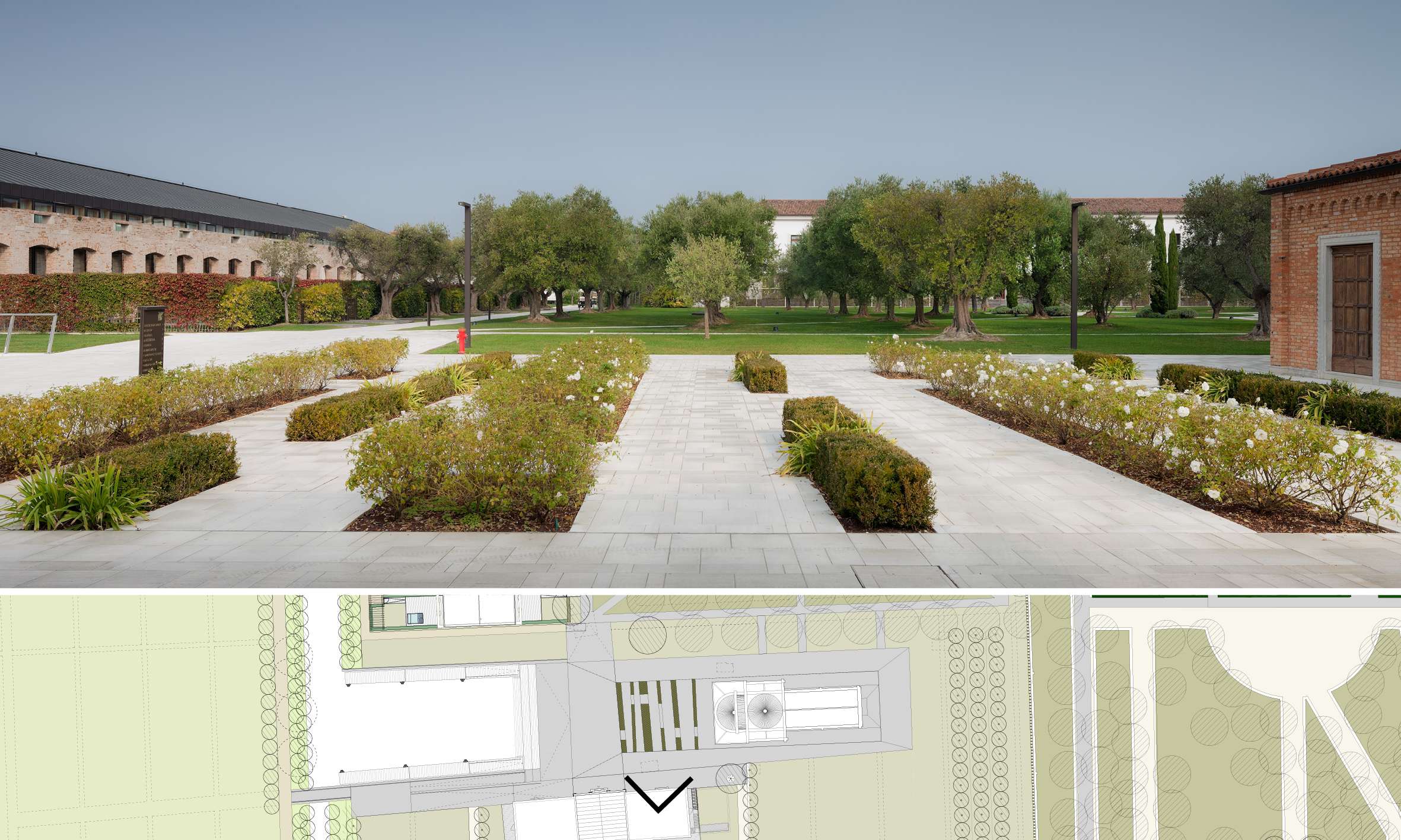 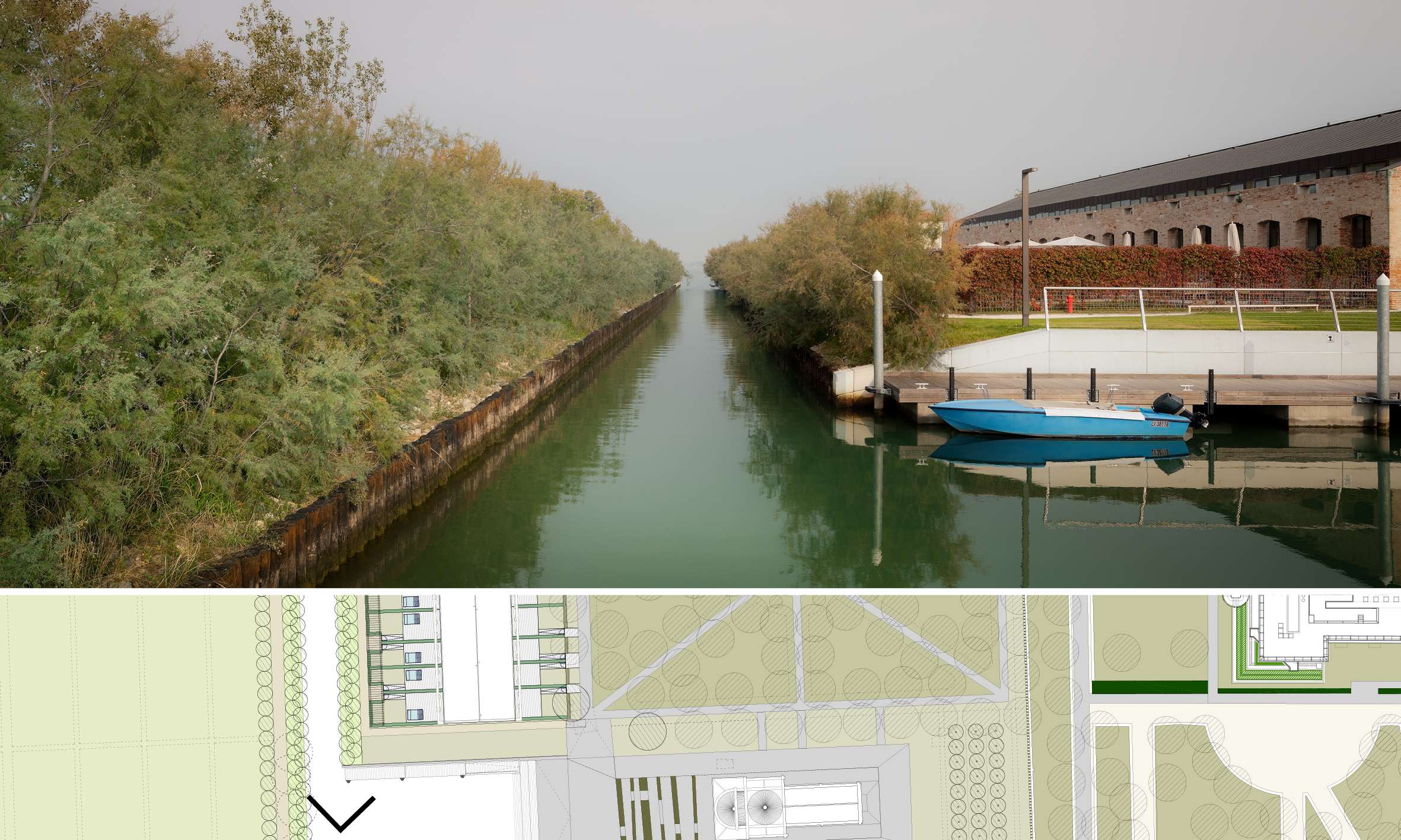 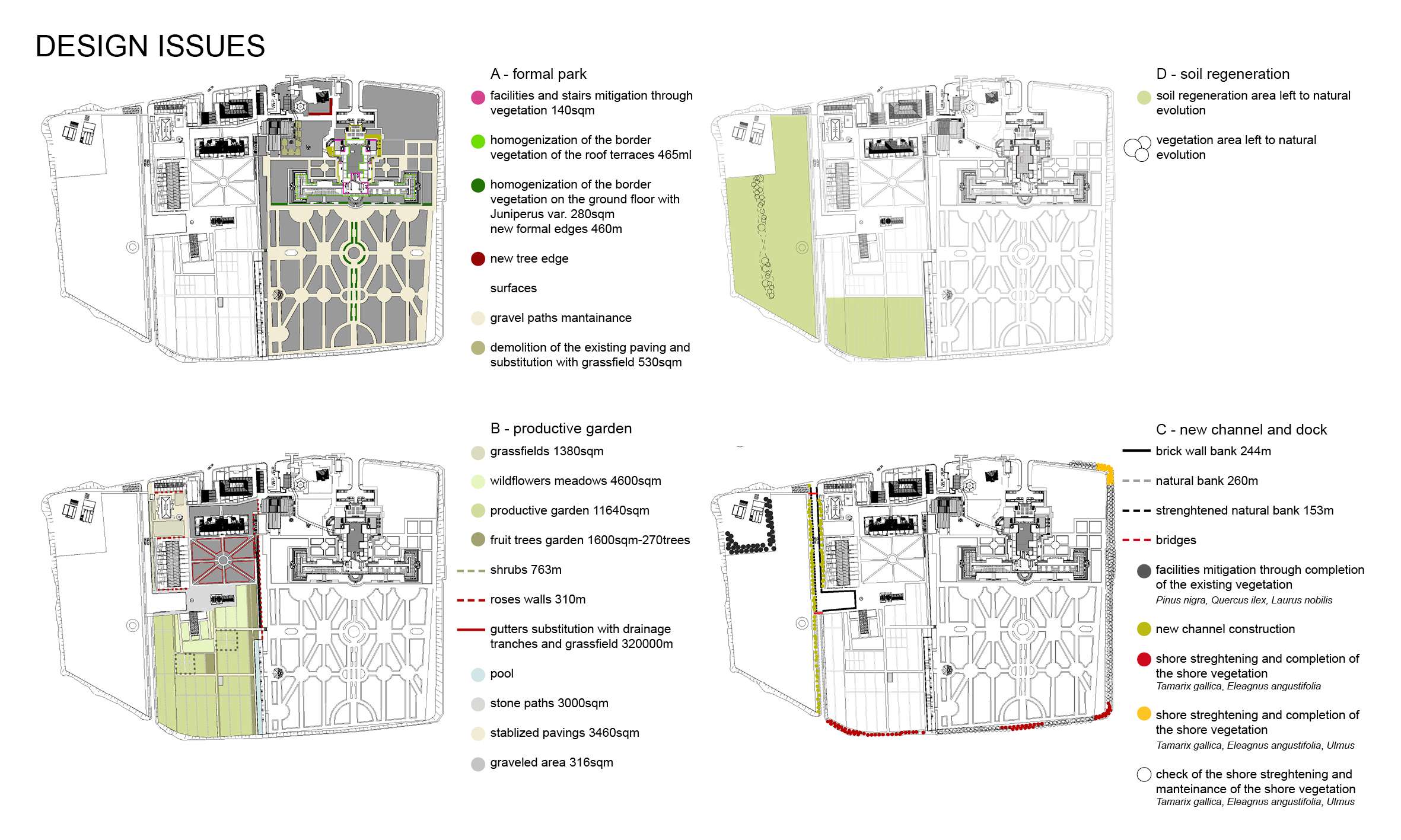 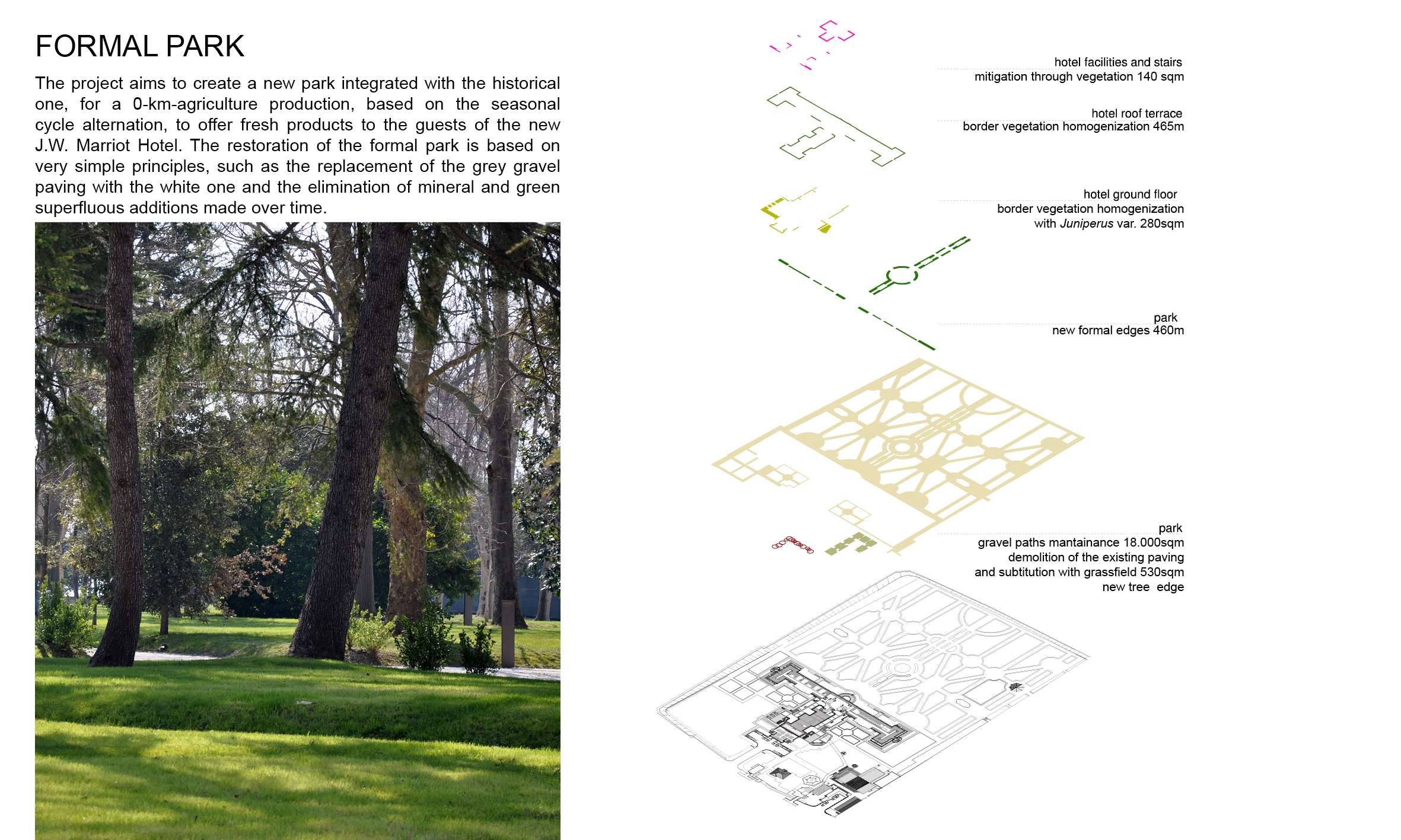 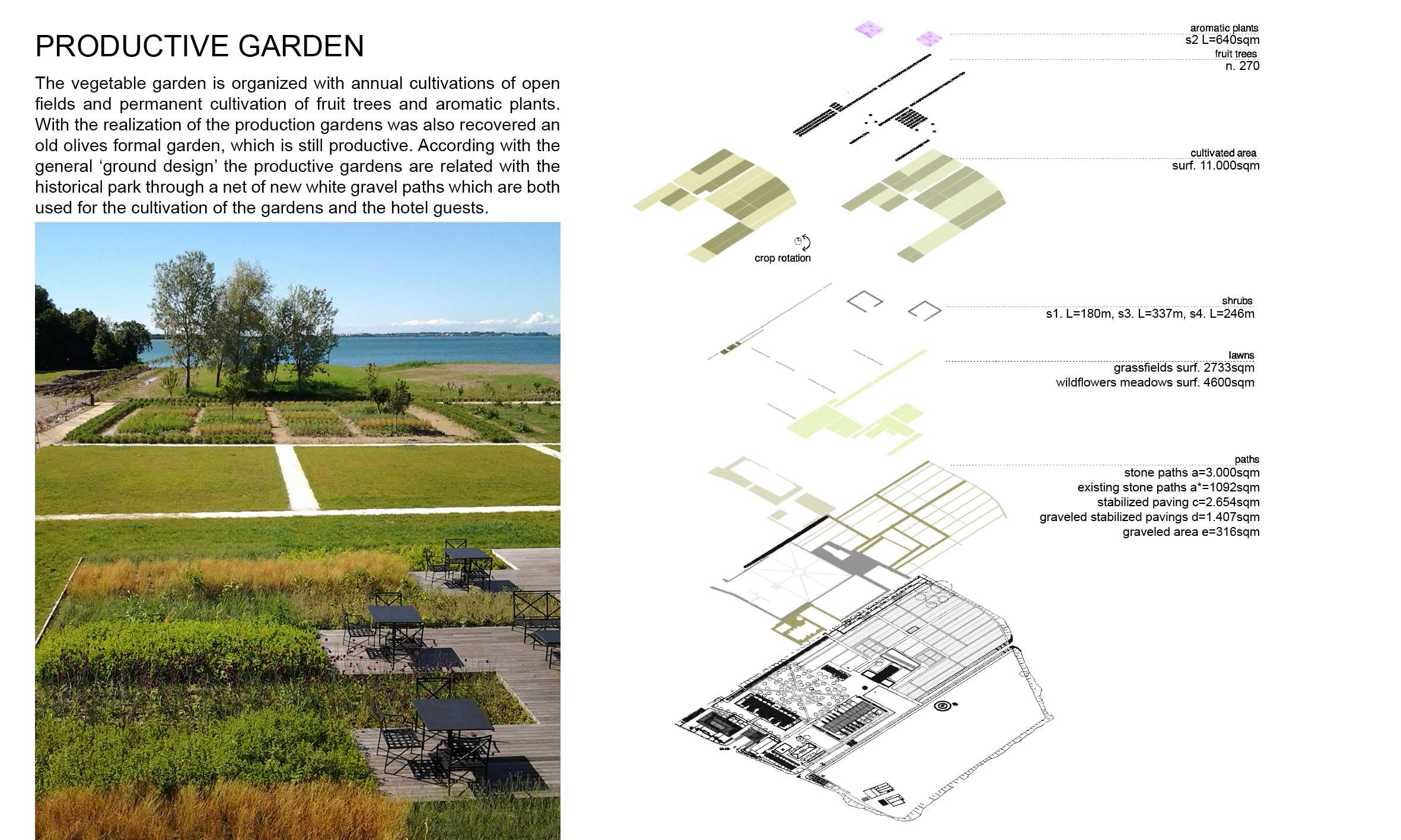 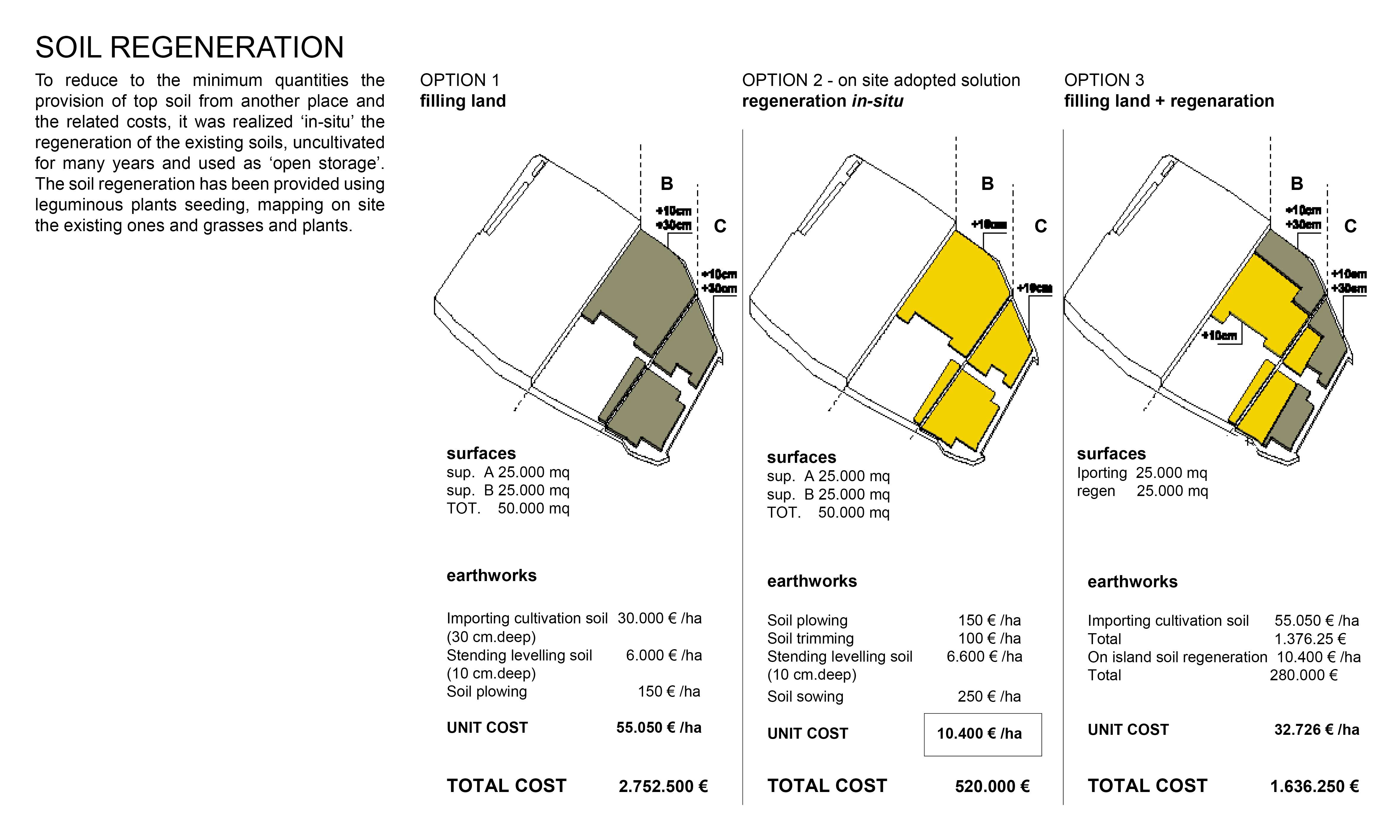 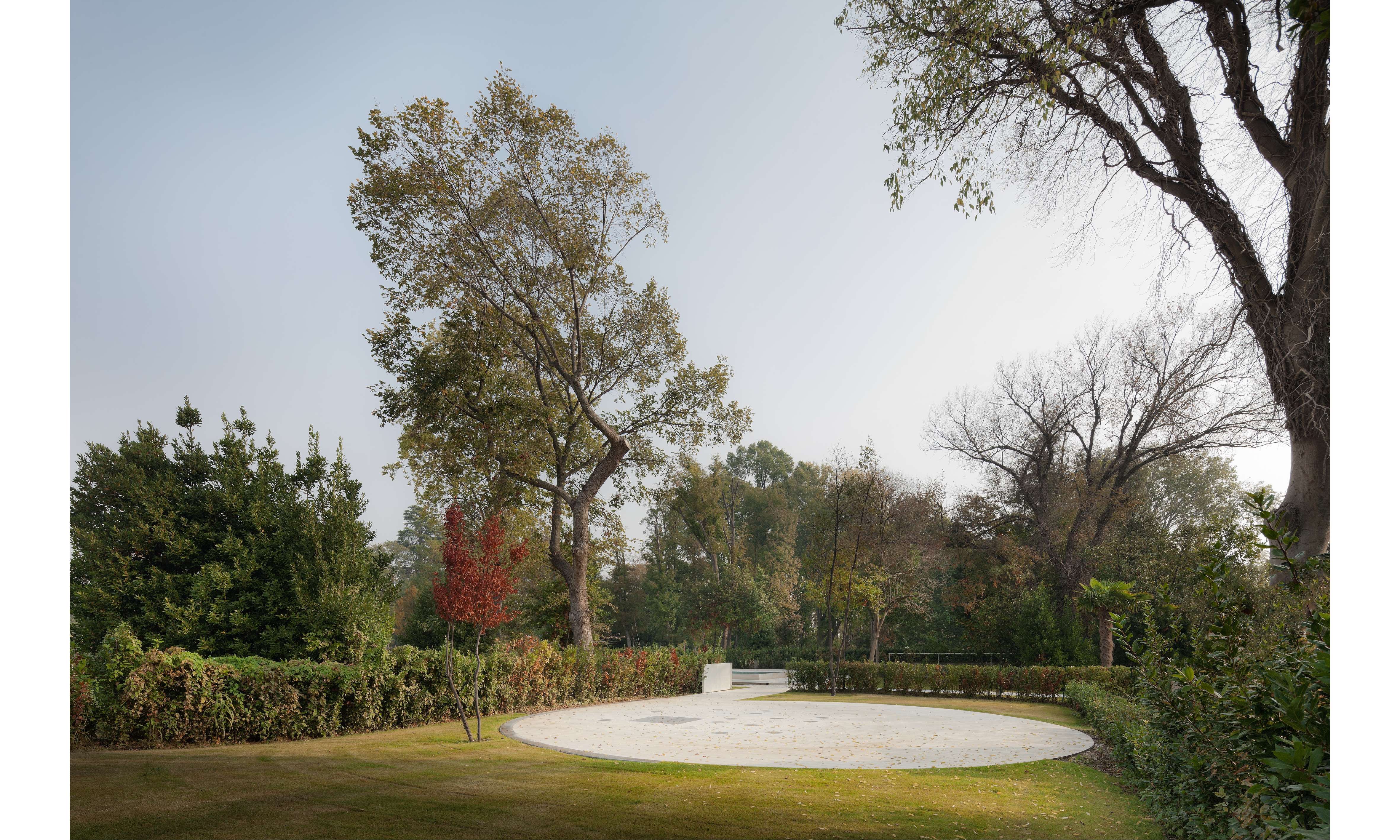 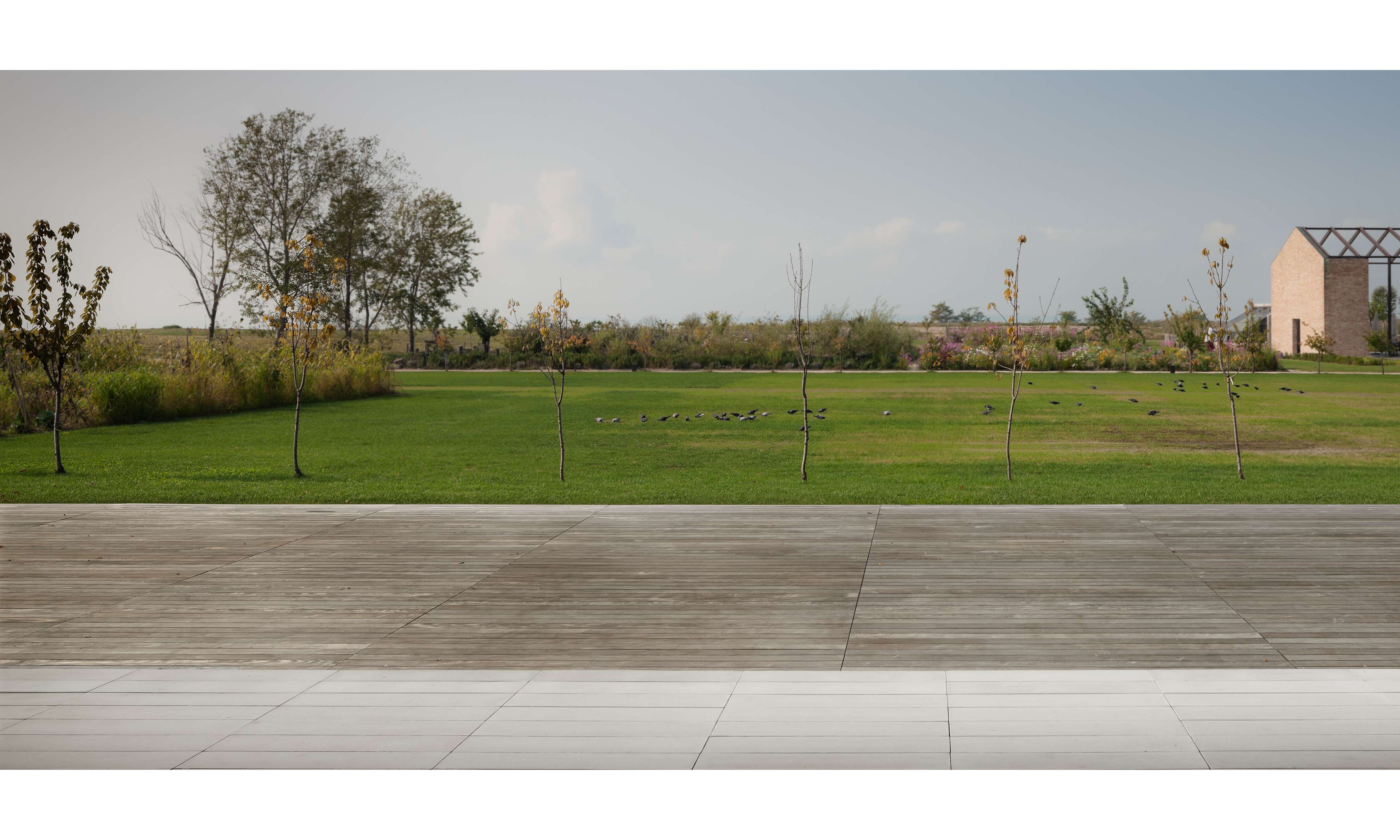 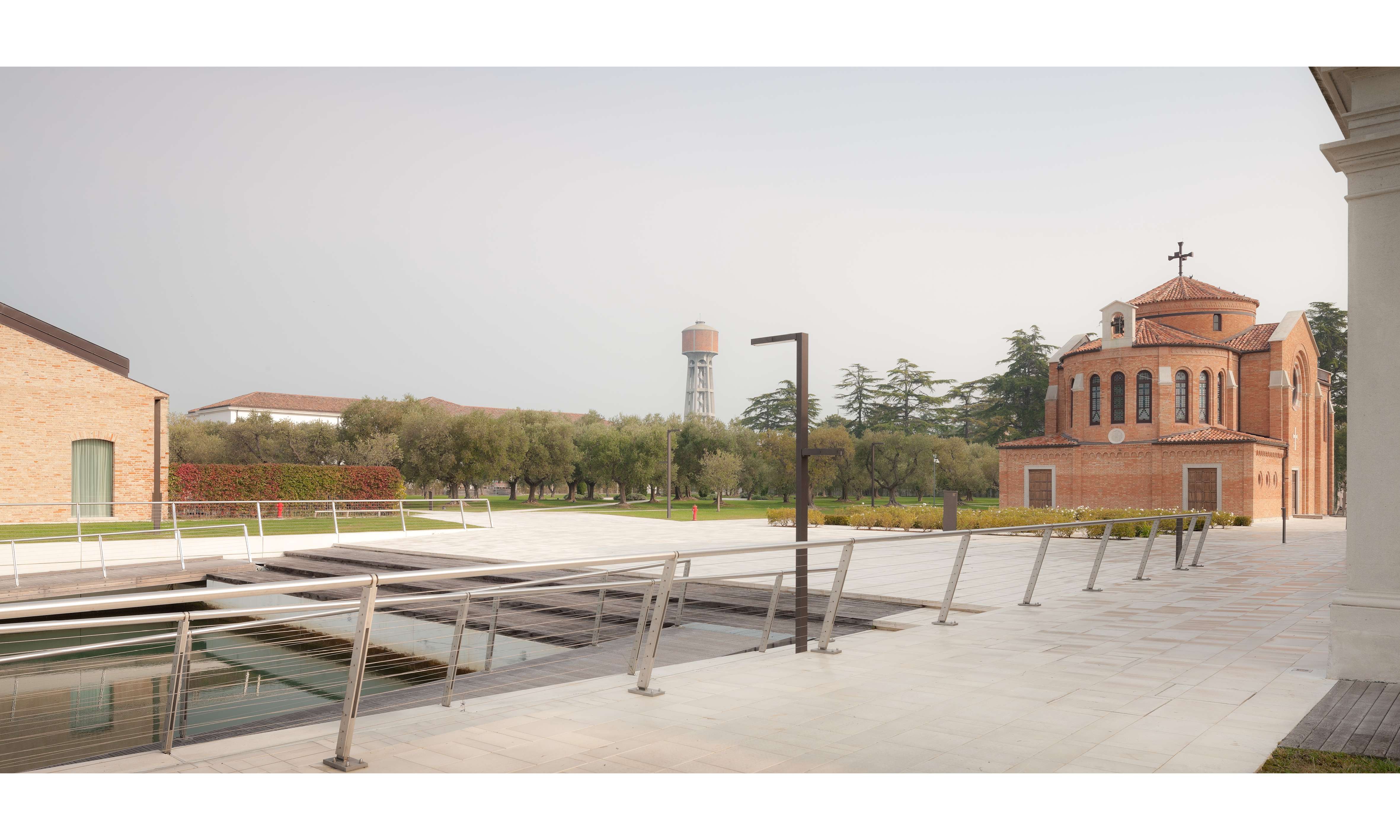 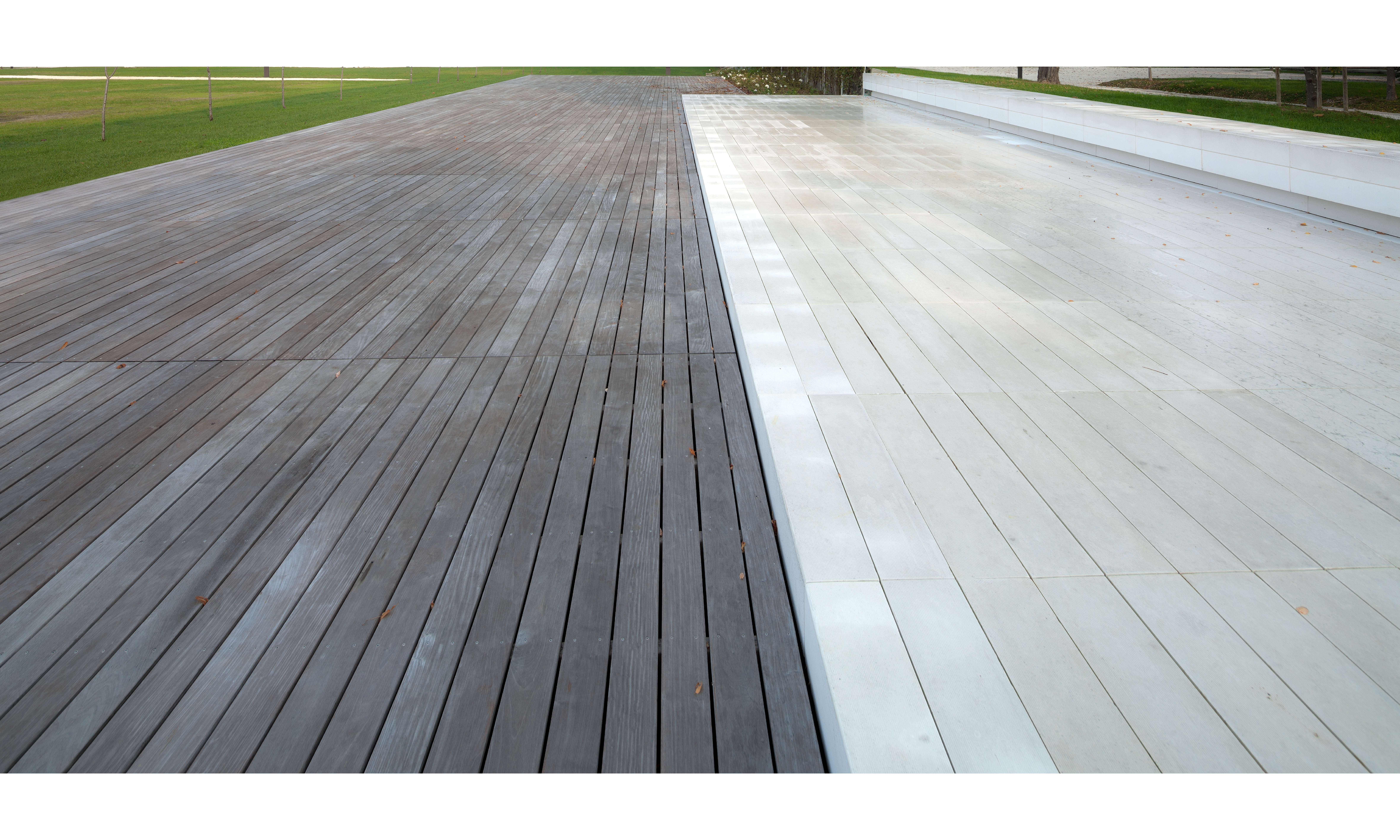 Starting with a ‘general and unitary design plan’, drafted in collaboration with the Public Administration and the Superintendence for Architectural and Landscape Heritage of Venice, for the abandoned island of Sacca Sessola inside the lagoon of Venice (founded in the nineteenth century and and actually inside ‘Natura 2000’ Network and ‘Special Protection Zone for Wildlife Conservation’ classified), it was realized a reconversion process of reuse and recycle of existing structures and landscape of a big former hospital complex, converted to  receptivity and public uses, which worked in the Island until 1985.

Supporting the receptive complex (signed by Matteo Thun & Partners), it has been realized a new landscape productive park, including the all island, associated with the restoration of the historical existing ones, which was converted and re-designed as a generator of virtuous processes. It as been planned and realized the implementation of a new agricultural area at km0 and the activation of low-maintenance natural resource management processes. In order to enhance and stimulate the island accessibility by venetian citizens, it has been excavated and re-opened an old inner channel and a new dock plaza and paths, which, equipped with floating docks and floating ramps ensure the island public use.

Landscape concept. The landscape concept was focused on abandoned land and activities regeneration.  The new ‘km 0’ agriculture production park  has been integrated with the existing formal park, protected by the application of the monumental constraint. For these issues, the productive garden scheme is organized according to an annual rotation of open field crops (aimed at natural soil regeneration and phytopathological control) and fruit plants cultivation,  supported by winter sowing in the existing greenhouse, which has been restored. On this "mobile park", the garden is alternated with grassy meadows and fields for the regeneration of soils, mainly sown with leguminous plants, capable of releasing nitrogen-fixing nutrients and improving soil quality.

Landscape design. The landscape renovation and regeneration of the existing open spaces, has been oriented to reconnect, into a contemporary landscape design, the different parts of the island with the existing structures, buildings and pavilions, which where disconnected and not accessible by the long abandonment period.

The priority objectives pursued by the landscape design concerned both the preservation of existing landscaping (formal parks and gardens) and the integration with the remaining open spaces areas, as well as the recovery of spaces, traces and memory of the island's former structure, in order to restore their original identity and unity. The hospital, together with the open spaces, in the  it was an example (at the beginning of the twentieth century) of a self-sufficient system for the management of disease and food resources, unfolding between the structure of the formal park and the composition of gardens and productive gardens in the western portion of the island. Among the aims, which were pursued by the project in order to adapt the open spaces design to the standards of the planned activities and the compliance with the current regulations and the sites conditions, there were introduced other issues, focused to increase the enjoyment of the island in accordance with the principle of conservation and maintenance of existing assets. Finally it was activated a low cost natural areas maintenance asset (especially for no park and garden portions). These objectives were shared with the Public Administration, in order to ensure an adequate synergy with the demands of public access to the island, and management of the old unpunished areas, which were partially restored to the agricultural dimension and part delivered to a phase of natural evolution, through a soil regeneration process.

New island connections. The public access to the island from the Venice lagoon, in addition to the one reserved for the guests of the accommodation, is ensured by the reopening of a historic canal and a new dock equipped with floating docks and ramps, which introduced to the new white stone paved square which became the ‘center place’ of this regained island layout.  This paved and garden space place redefines the relationship between the ex-workers building and the ex-church building, which are linked to regenerated agricultural production, and exhibition spaces, respectively. Public access to the island is governed by a new pedestrian path near the existing internal canal, which has been reopened. From the square (under which has been built a tank for the rainwater collection and reuse), it can be possible to reach all the island open spaces and the hotel facilities; rooms, spa, restaurant, outdoor pool with the large solarium. Close to the new plaza, the ex-workers building was converted into a new restaurant, open to the venetian lagoon and accessible by boat, which cooks the ‘km0’ products of the island, along with a farmers shelter

Soil regeneration. The existing soil quality control has been a central point of the project, also to control the economical cost impact. Following the evaluation of the different application possibilities, which included the hypothesis of returning a significant layer of fertile soil to the island (with the increase in costs due to the incidence of water transport), it has been pursued the in ‘situ soil-regeneration’ technique by using sowing seeds of leguminous plants, with minimum land repositories needed to bring them back to project quotas. This agronomic technique, the subject of more and more frequent utilization, given the undoubted economic advantages, envisages a cycle of at least two or three years to achieve an effective result.