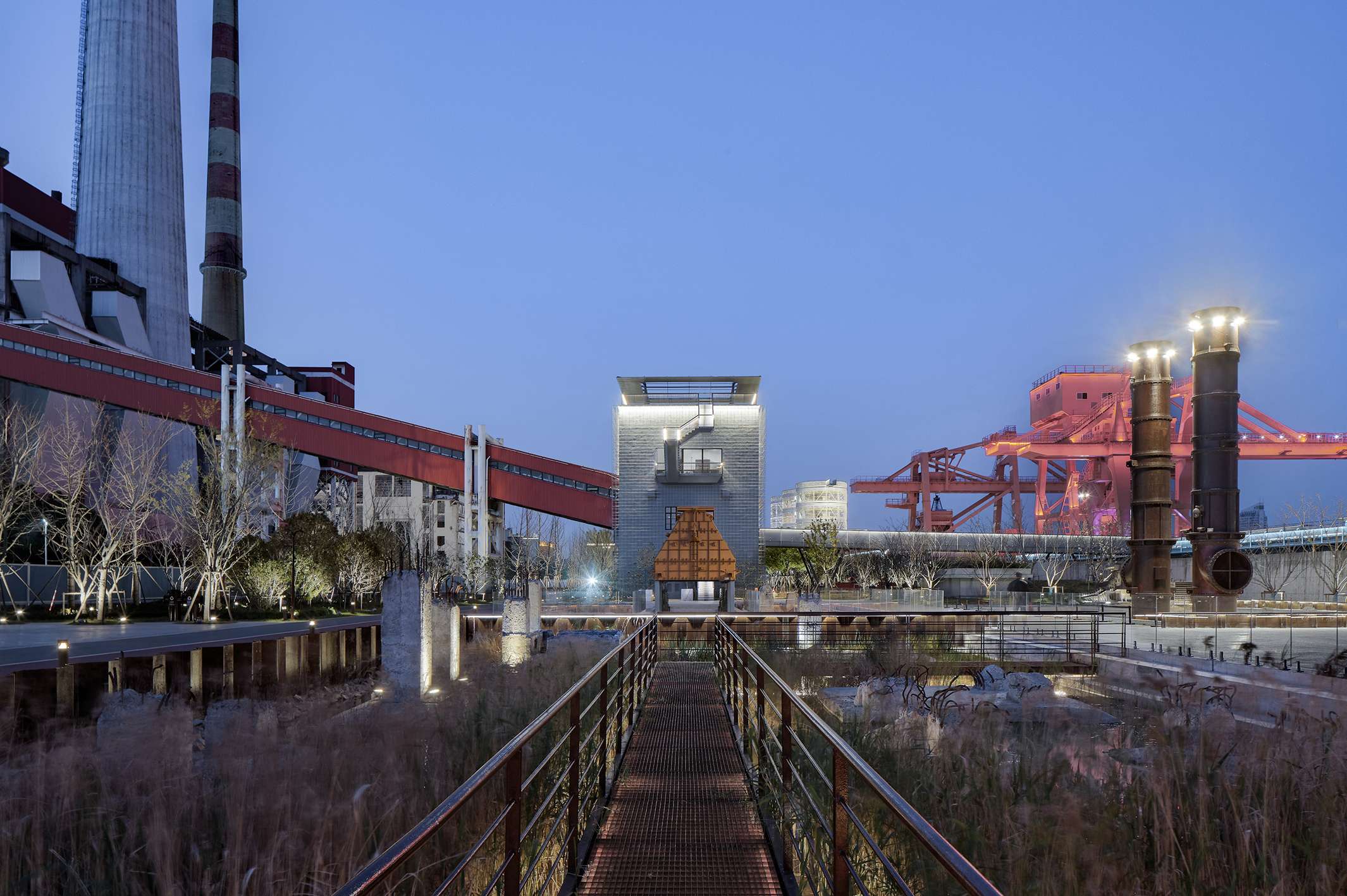 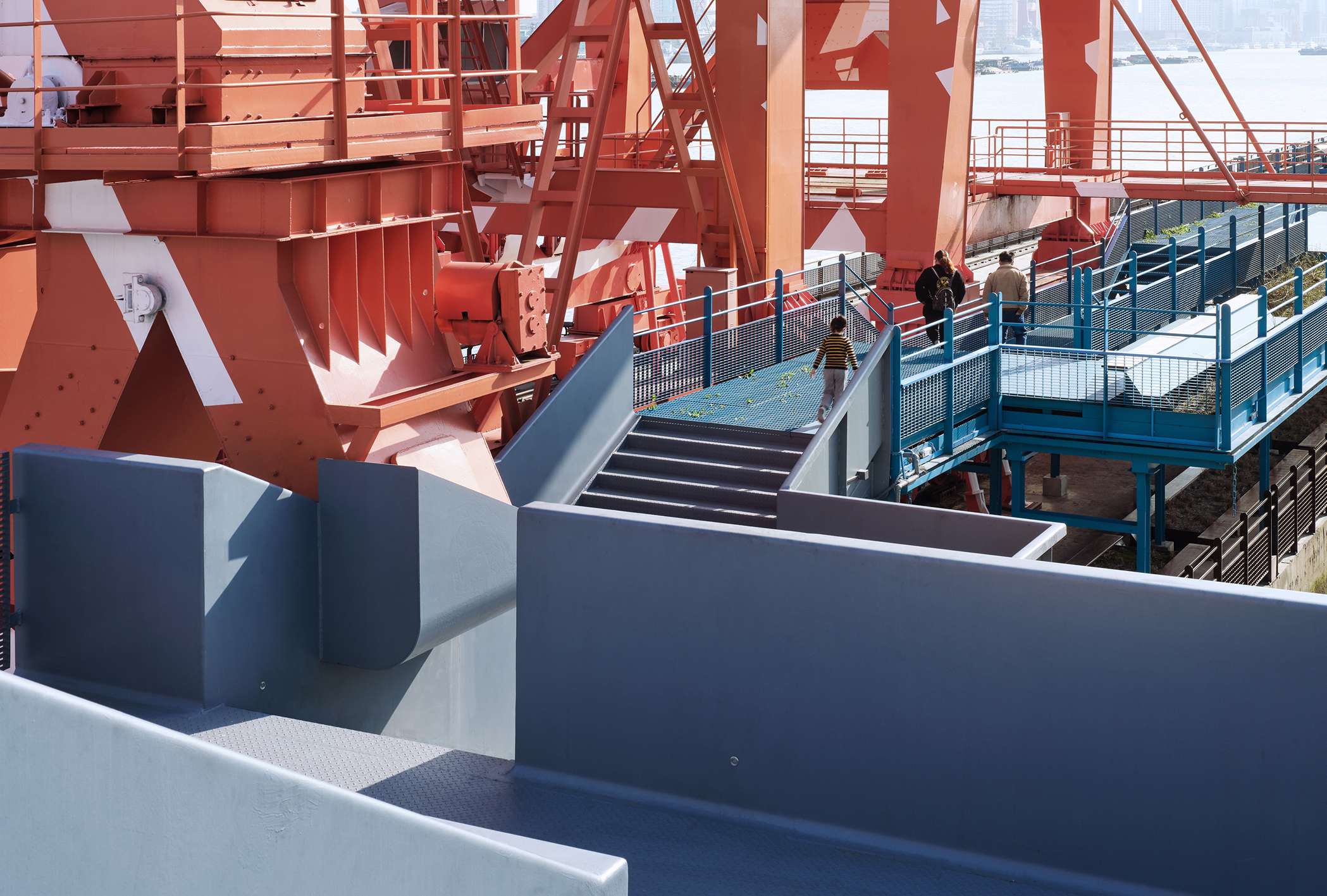 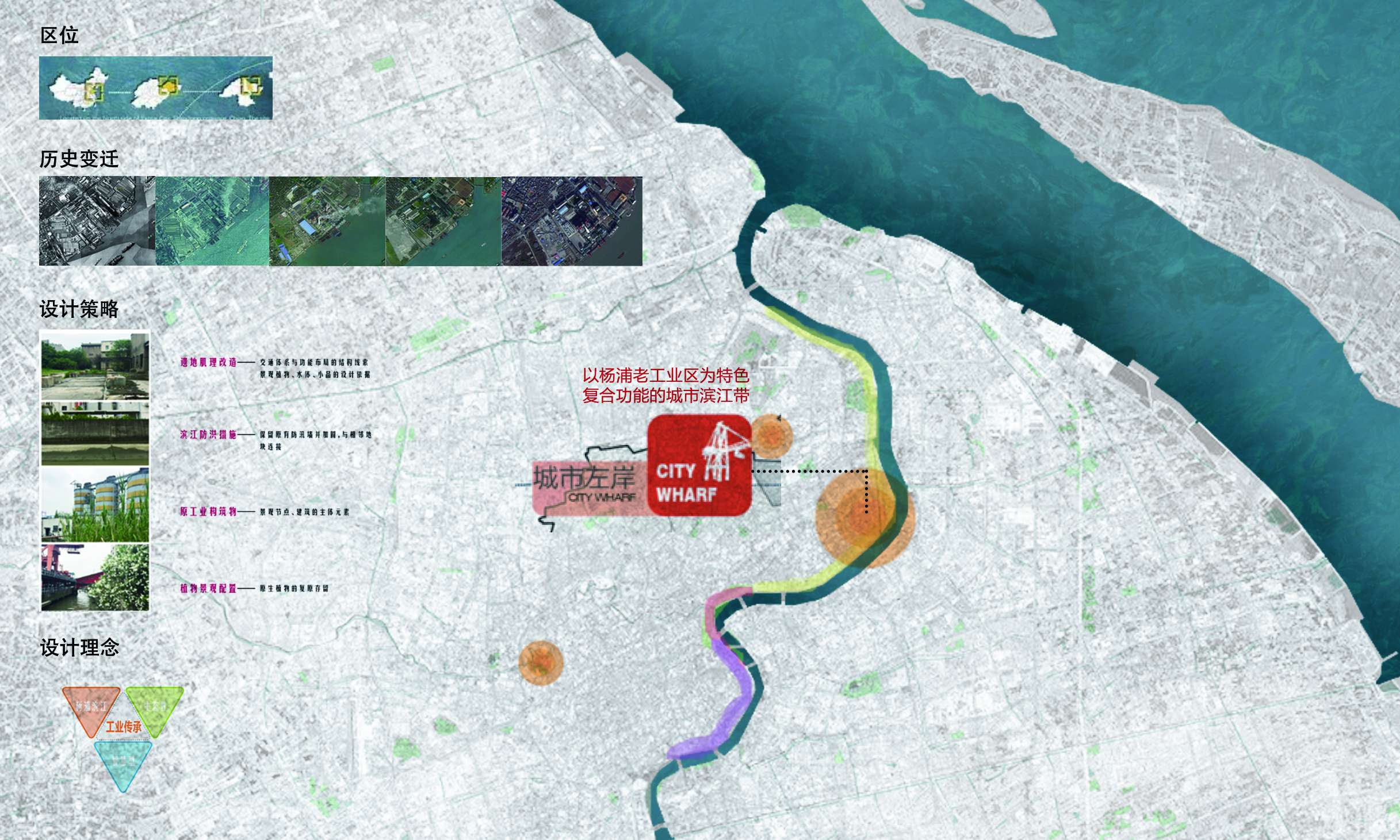 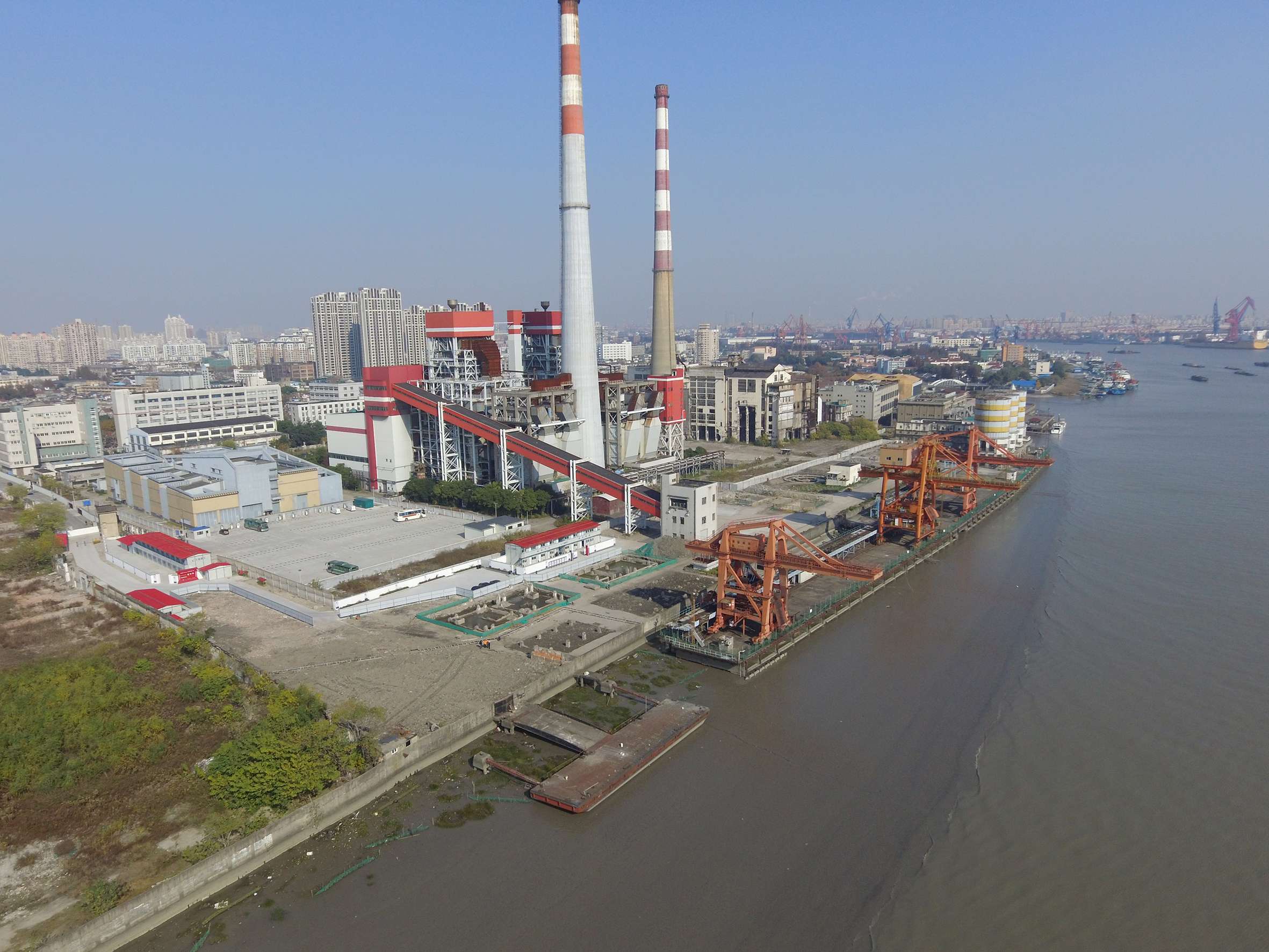 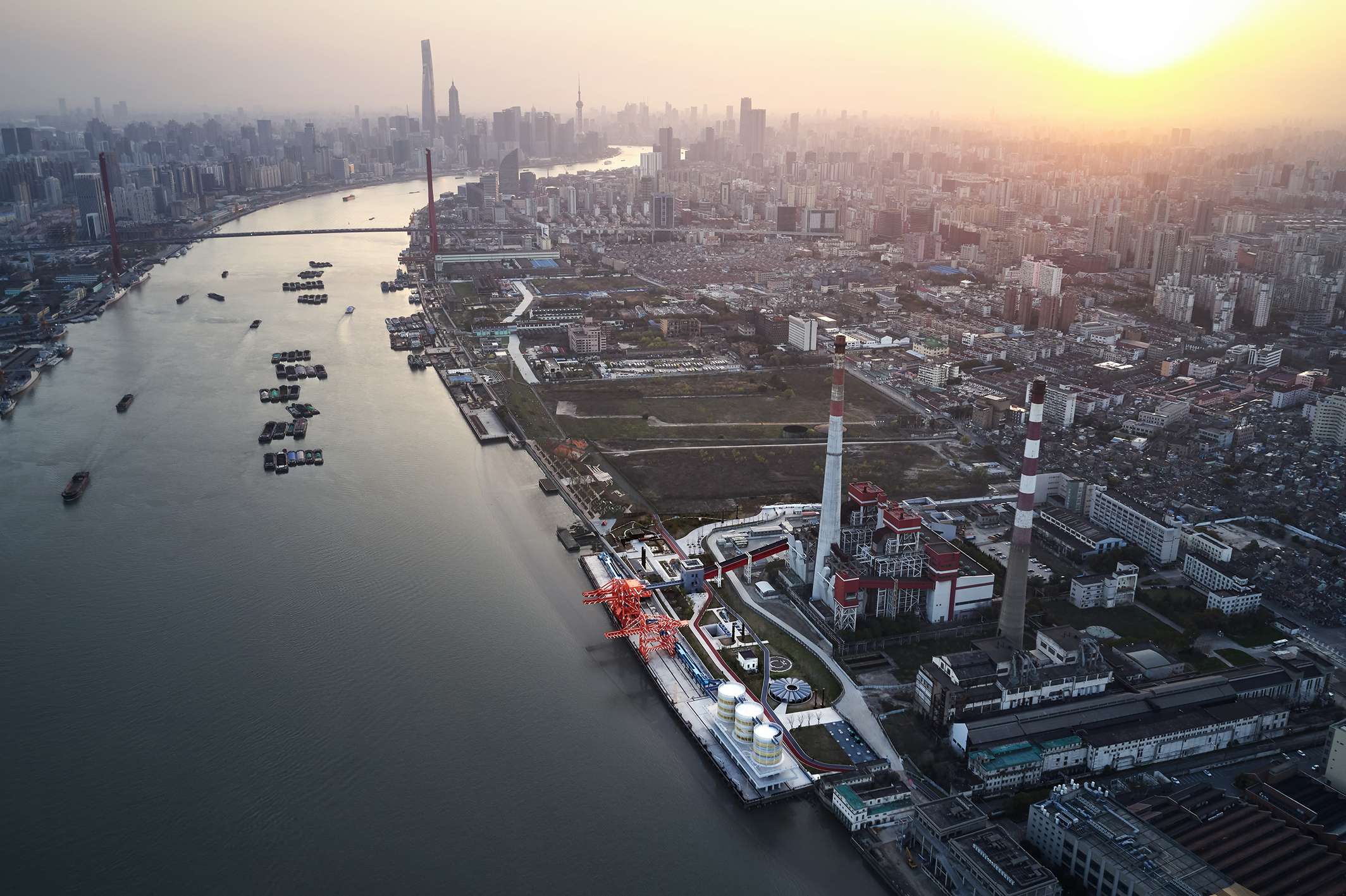 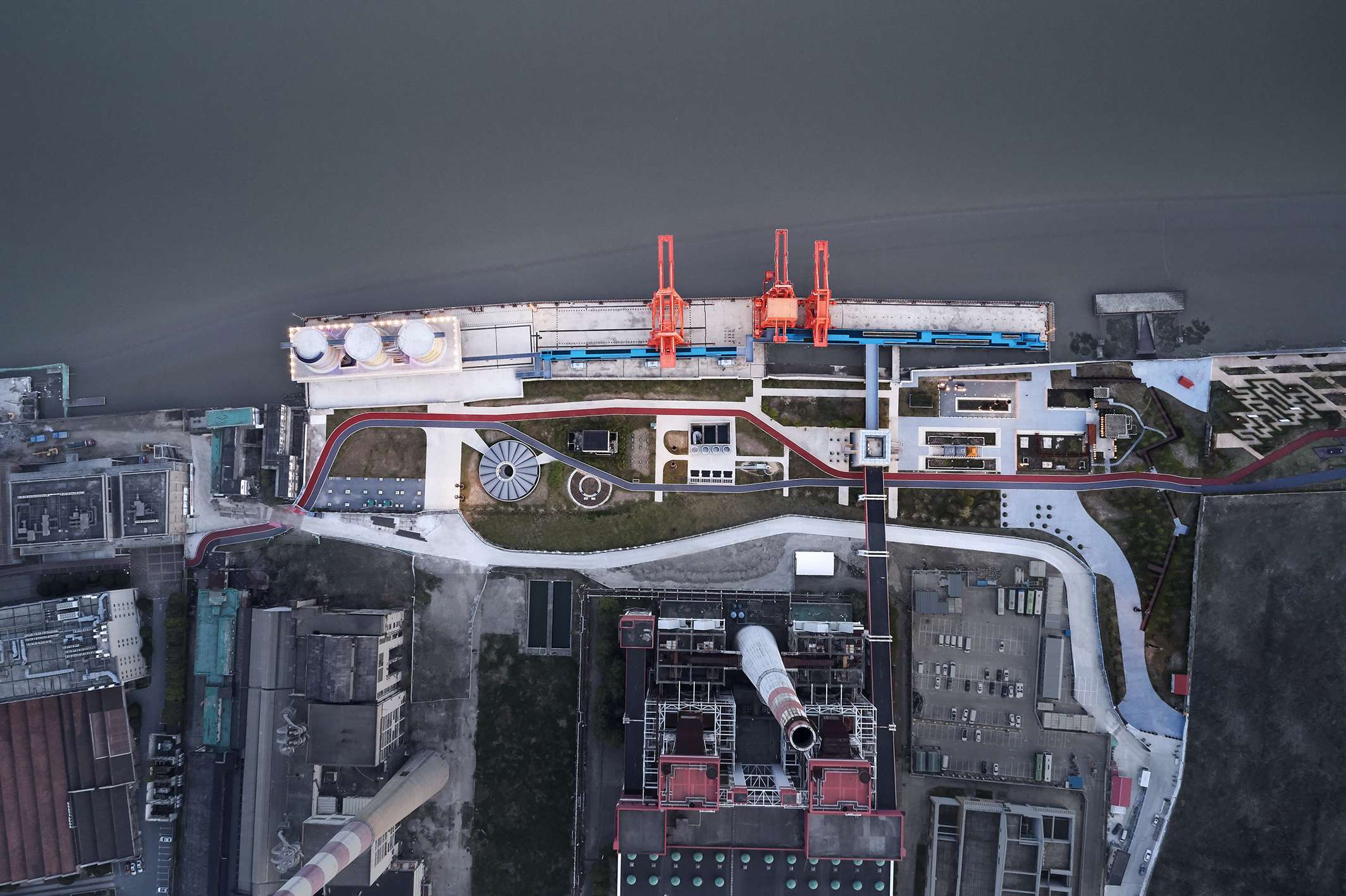 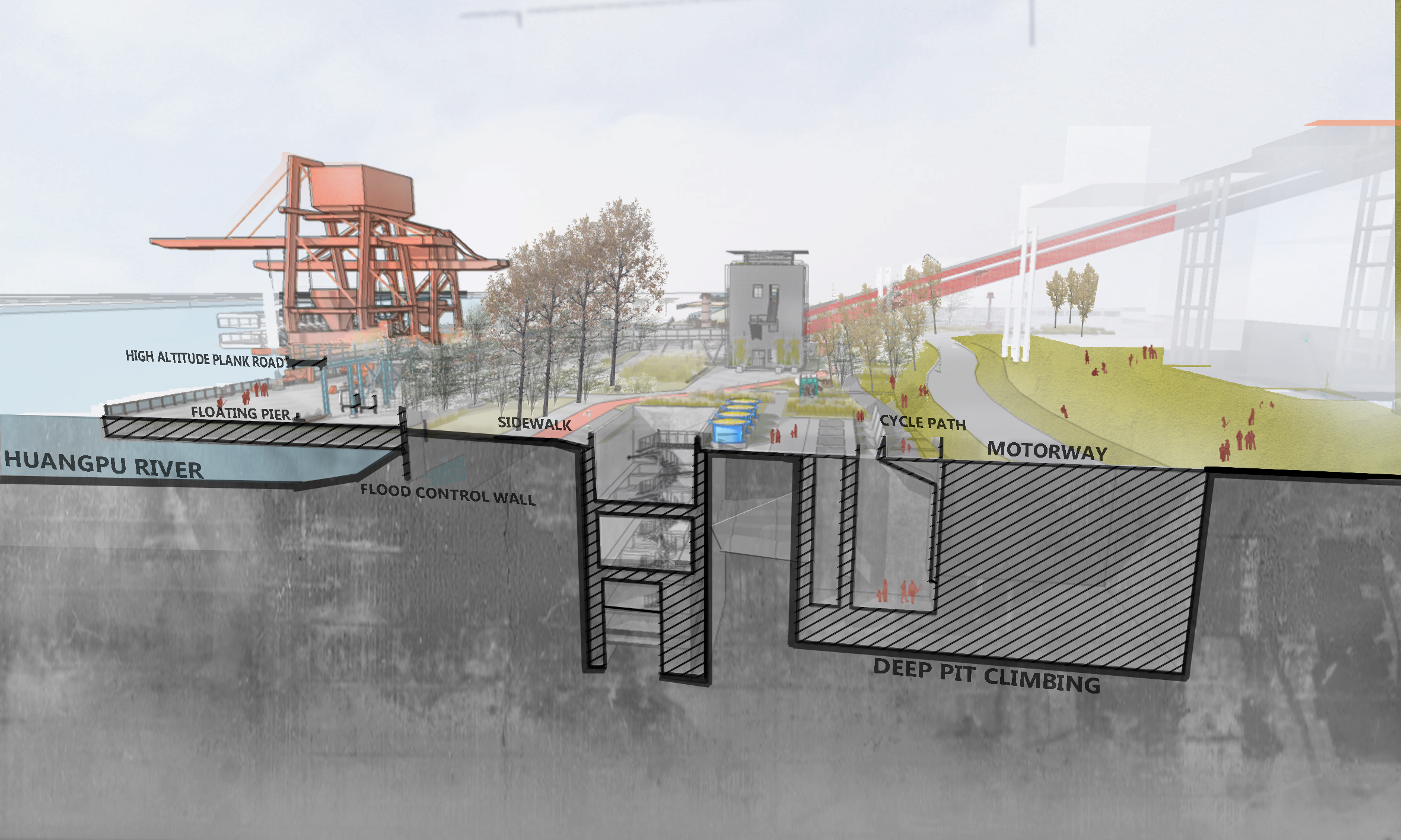 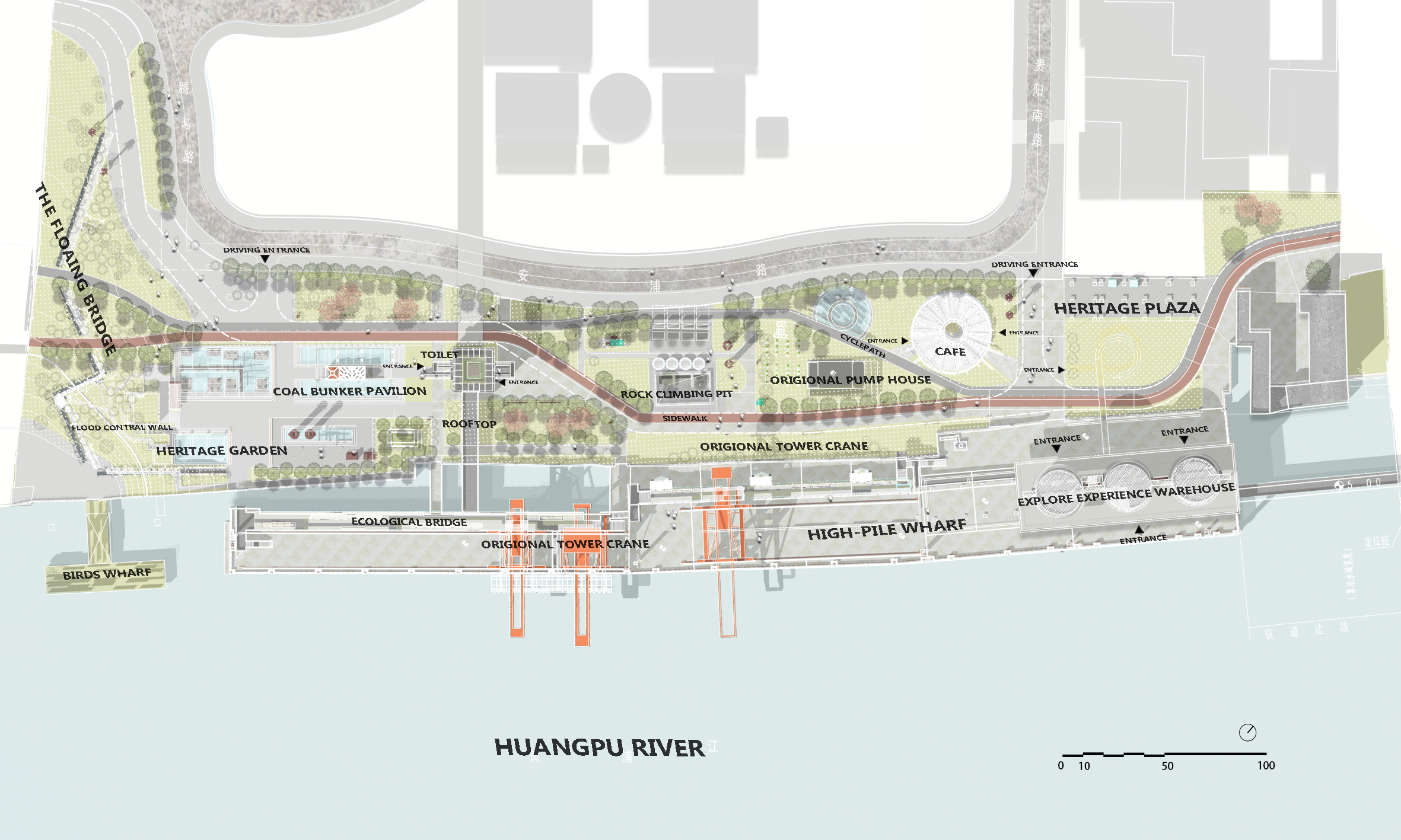 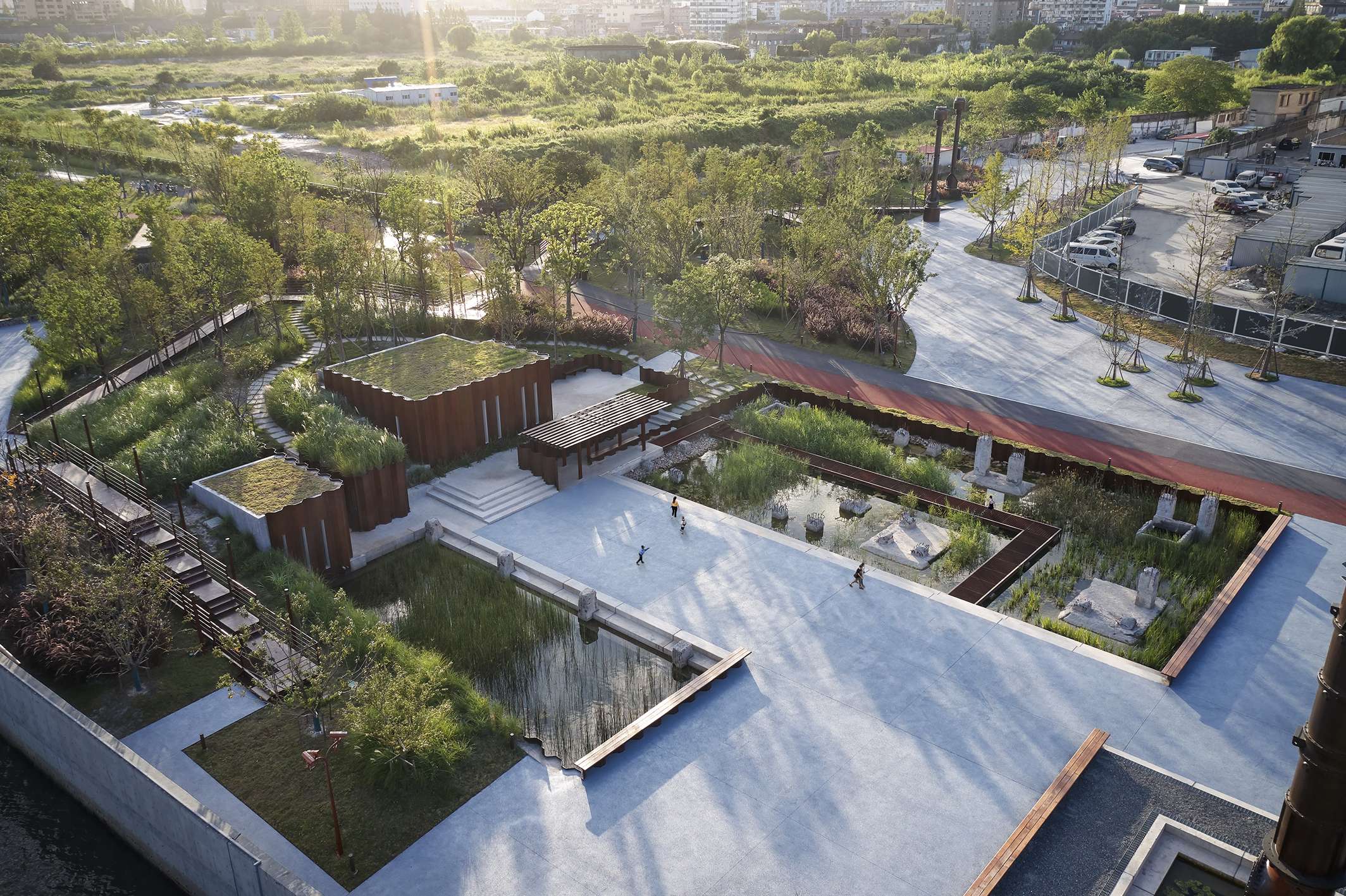 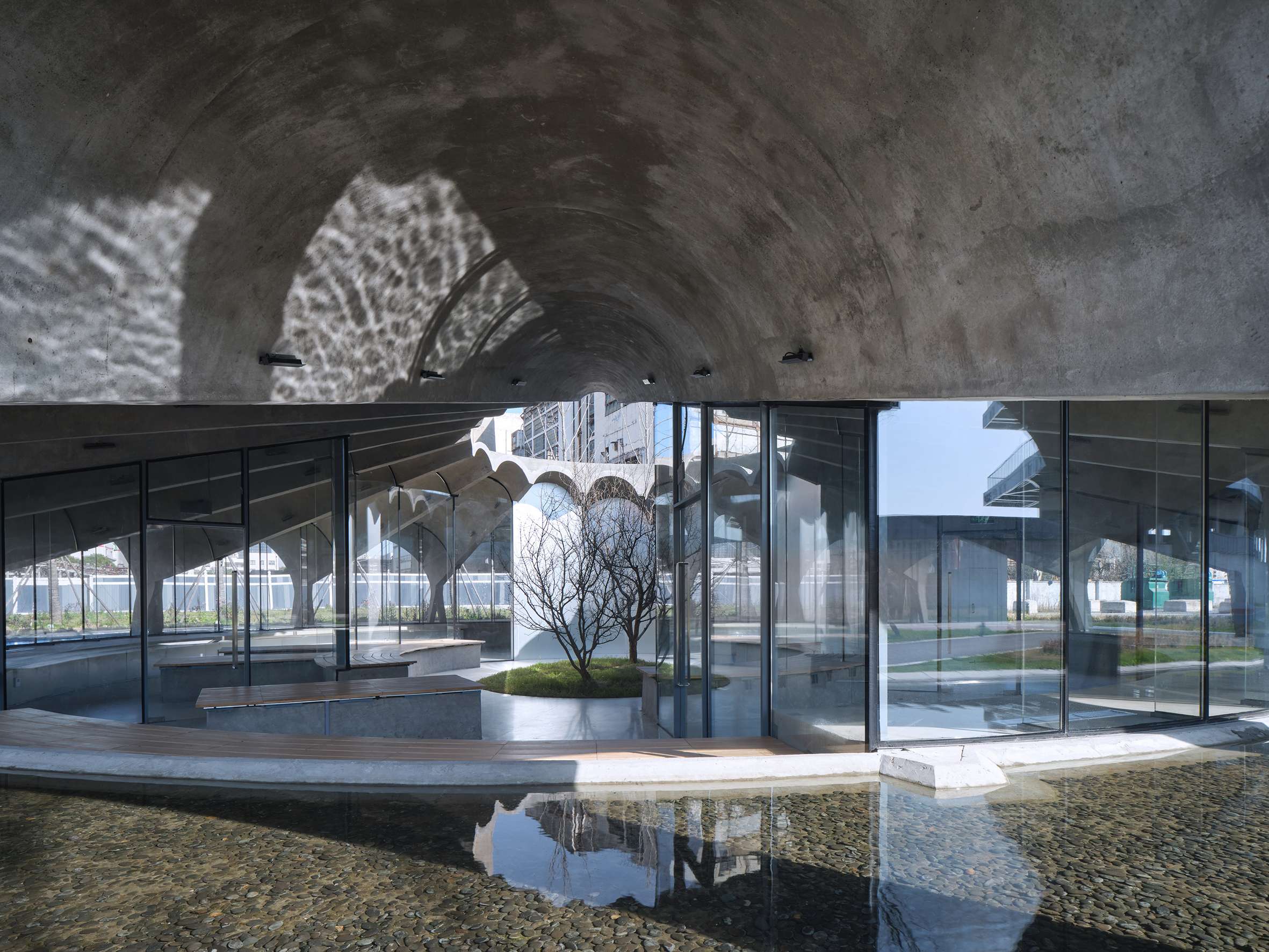 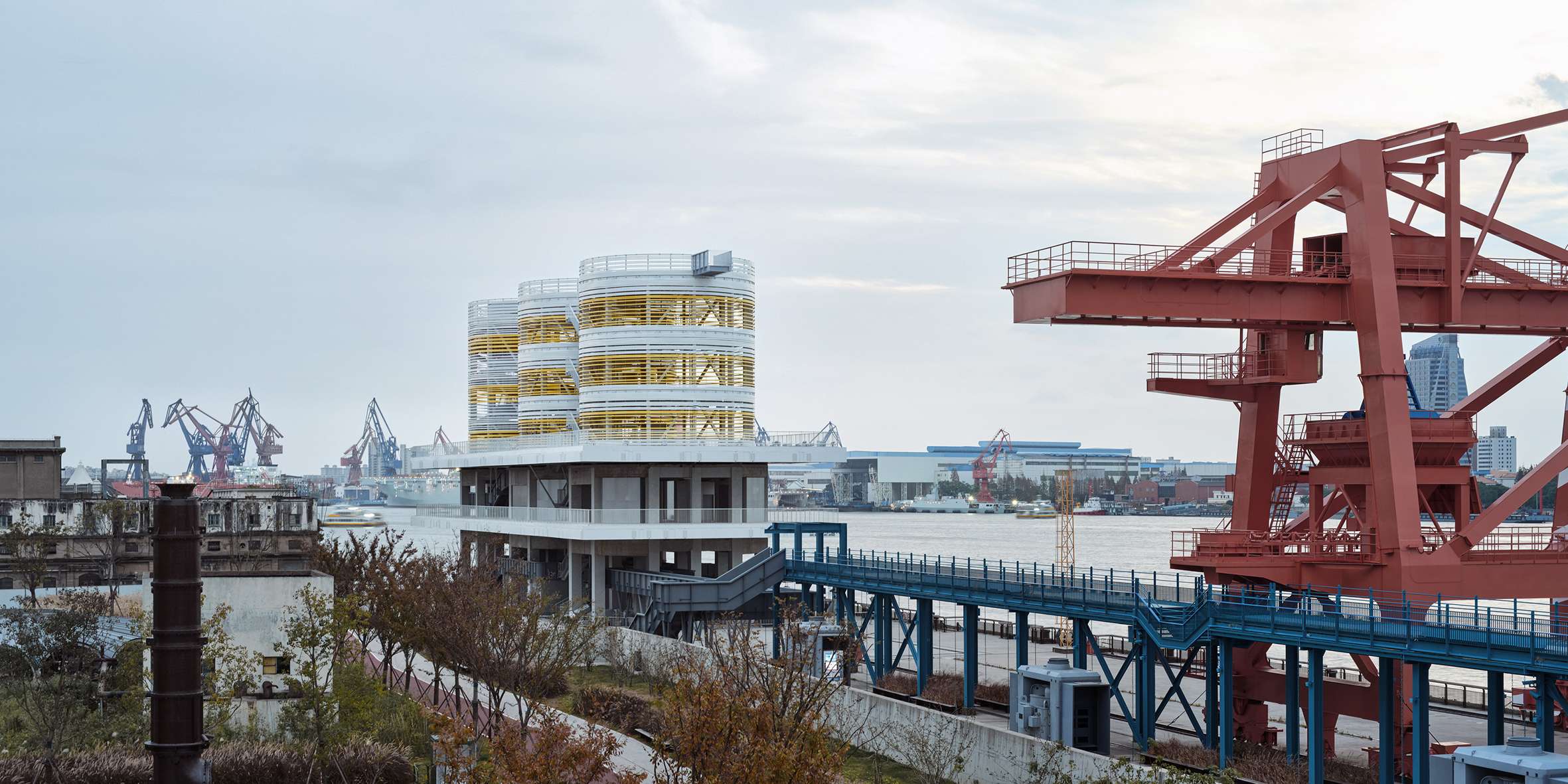 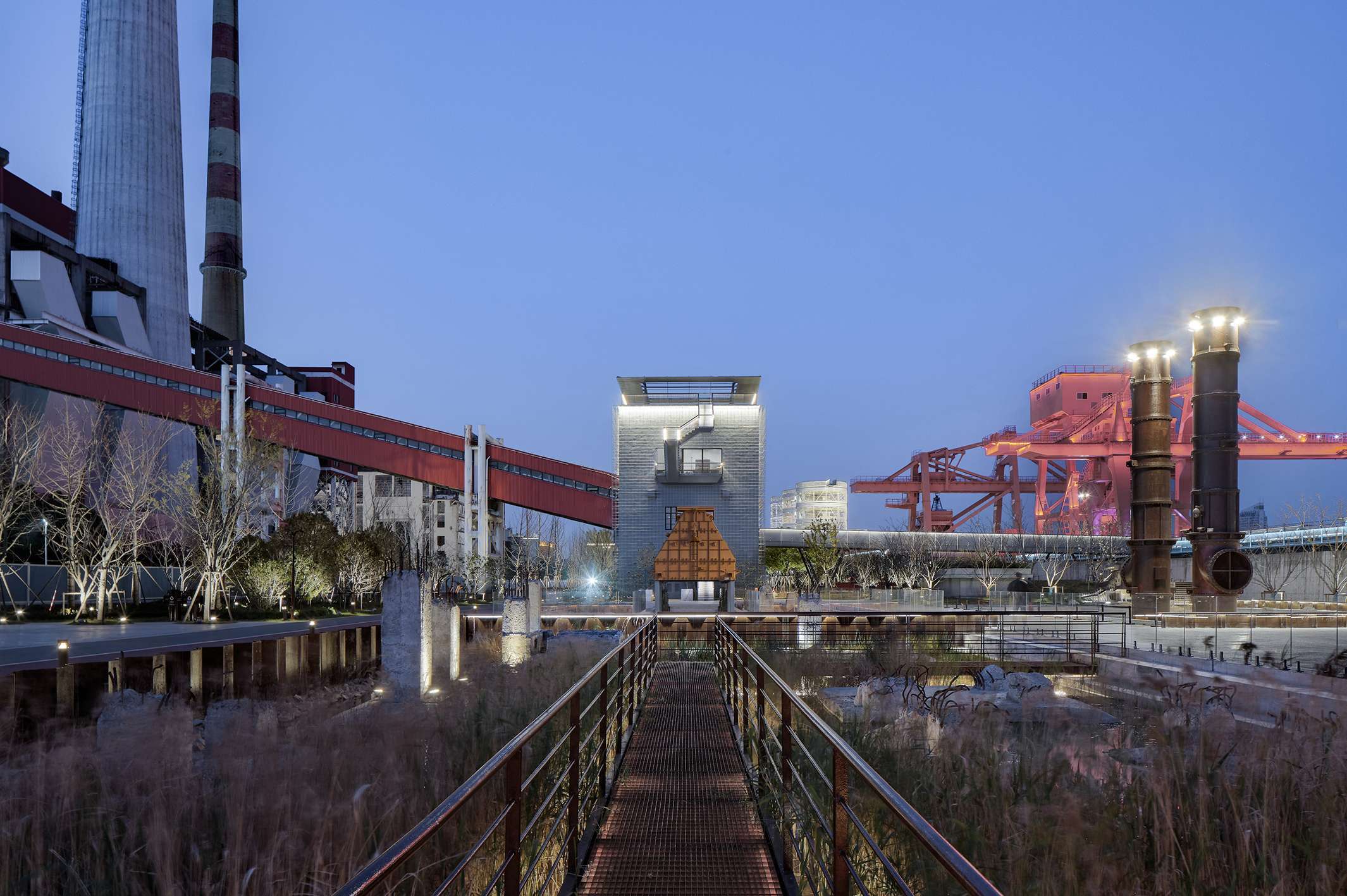 The Art Waterfront of Yang Shupu Thermal Power Plant was formerly Yang Shupu Power Plant built in 1913 by the British investors. As the No.1 Thermal Power Plant in the Far East, It played a crucial role in the urban development of Shanghai. However, it also caused severe air pollution by burning coals, and engendered the surrounding environment. In 2015, accompanying the start of the project for public space alongside Huangpu River, the Power Plant was shut down for ecological repairing and artistic renovation. The project aims to transform the isolated and closed industrial waterfront to shared ecological and cultural open space, “returning the riverside to all the citizens”. It has three targets: repairing environmental damages caused coal-burning, forging the genius loci of the site and implanting the public space into the whole city.

2. Design Idea: “Looking back for transforming anew” and Returning to Nature

The reuse of industrial structures serves as the starting point of forging genius loci. The site is left over with 105-meter-high chimney, huge crane-mouth hanging along the riverside, trestle works that used to carry the coal, clean water pond, damp and dry ash tanks and etc., which boasts spectacular space and impressive form. The rearranging of public space begins with comprehending the huge structures as well as the original industrial technological process. On the other hand, applying a limited intervention and low impact design strategy, we designed a restoration system of the ecological environment based on the spatial condition of the factories and the local eco system. We kept the topology and inserted a ecological wetland which collects rainwater. The plants for vegetation are mainly reeds and water-resistant arbor, which are commonly seen in the local eco system. The tectonics of passageways features a light steel structure that minimalizes impact to the environment during construction and in visual aspects places an interesting juxtaposition of industrial and natural landscape.

3.Layered Authenticity of the Ruin Garden

When we are introduced to the site, two transportation structures and one office building were already tore down. We decide to seize the momentum and dig up three ponds upon the destructed foundation ditches of the three buildings, exposing the basement and steel bars. At the meantime, the site is leveled to become a ruin piazza. To the west, the earth dug up is used to formulate a low slope, composing a negative landscape to the ponds. Service rooms such as facility and public toilets are hidden under the slope made of cast-in-place concrete, whose framework are corrosion rust steel plate, the same as the pond fence. Three coal scuttles that were dismantled somewhere else are placed on one of the ponds, forming a visual focus like sculptures. The transportation belts along the riverside are also reserved. Its half-circular rubber bands are replaced with steel ones, which are meant to be covered with earth and with plants in it.

There is a set of installations for water storage and water cleaning, of which only two round water ponds are preserved. They are demolished but the structural foundations are left. The design intends to turn one into a rainwater garden, and to transform another into a café. The foundation that supposed to be a rainwater garden is planted with water-cleaning vegetations such as miscanthus sinensis, with cobblestones covered the bed of the foundation. It can adjust the falling water and release the pressure of the municipal water drainage. The foundation that meant to be a café works as a formal type. It is covered with round conoid arch standing on the round basement that is enlarged as a concentric circle to the foundation. The center of the arch is open to the sky, introducing natural light into the café and inviting the huge chimney into view. One can see the clear water reservoir while drinking coffee through the openings of the arch, thinking of their fading past.

Art Space Grey Warehouse are used to be three dry ash tanks along the riverside. They are integrated into a whole by inserting two platforms. The original 15-meter-high façade of the tanks are replaced by gridded iron sheets, which forms an ambiguous interface. The art space is designed as a public promenade, curling from the entrance carved by concrete framework to the top platform. Six boxes with a set of staircases are plugged into the tanks, whose functions are to be decided together with people’s behavior with the warehouse.

The measures of adapting to local conditions and taking advantage of the situation have been implemented in the transformation of the entire power plant section. Artificial traces of different periods are juxtaposed indifferently, expressing respect for different histories; very different microclimates are identified, and limited intervention and low impact methods are used to maintain and to repair them. The power plant section has established a dialogue to discuss the worldwide topic of "Waterfront space brings a better life for humankind".