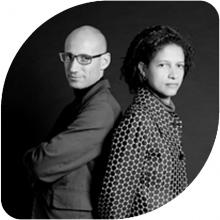 Iñaki Alday Sanz, Margarita Jover Biboum. They received their degrees in Architecture from the School of Architecture of El Vallès (ETSAV) in 1992 and 1995 and were professors of Projects at the ETSAV until 2005 and at the BAU High Design School, respectively. They have also taught several masters level courses and workshops. Most of their projects are in public interest and have evolved from won competitions on ideas regarding public spaces, landscape and equipment. They won the European Prize of Urban Public Space in 2002 and were fi nalists of the FAD (Foster in Arts and Design) of the Spanish Biennial of Architecture and the Latin American Biennial of Architecture. Christine Dalnoky.Upon her return from Rome in 1988, she and Michel Desvigne founded the Desvigne & Dalnoky landscape agency in Paris. The agency primarily works for public organizations, large companies, and architecture fi rms in Europe. The agency’s projects and interventions are regularly published in specialized international journals. They have collaborated with Renzo Piano on several projects and with Norman Foster, Richard Rogers, Jean Nouvel, Paul Andreu, Jean-Marie Duthilleul, and Architecture Studio. They have carried out numerous construction projects and studies on their own, in different european cities. She has remained active in her own studio since 2002, which is based in Gordes in the department of Vaucluse.