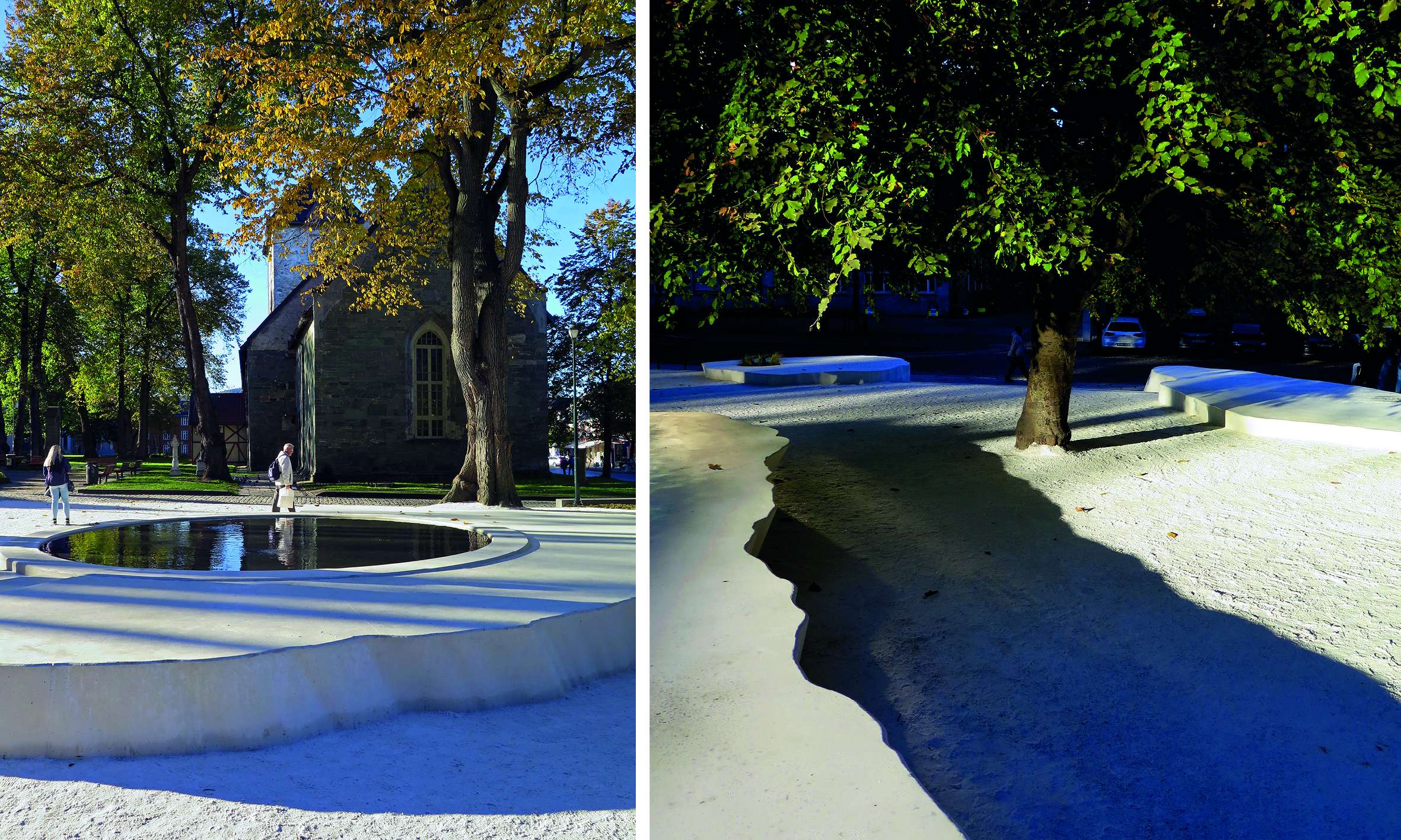 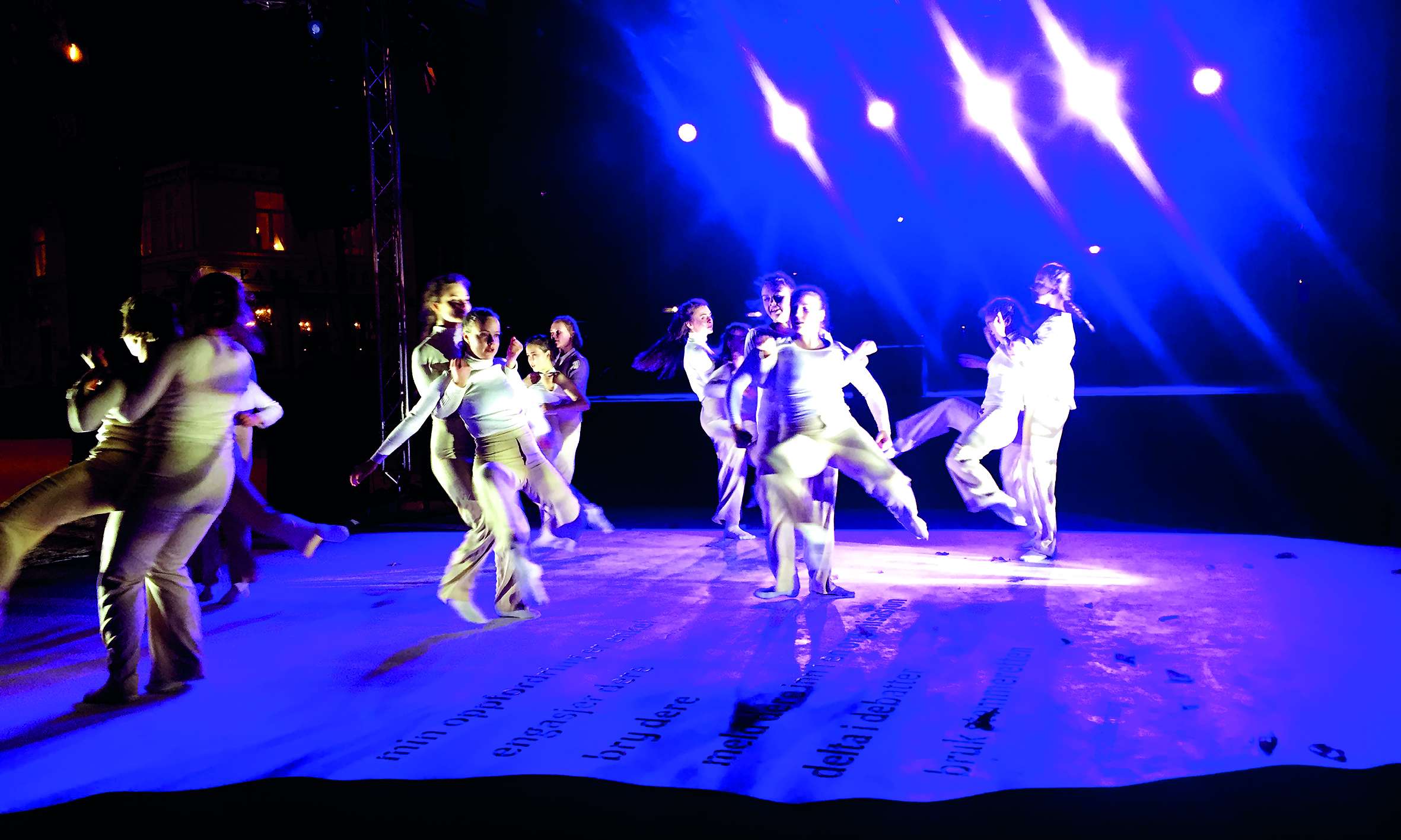 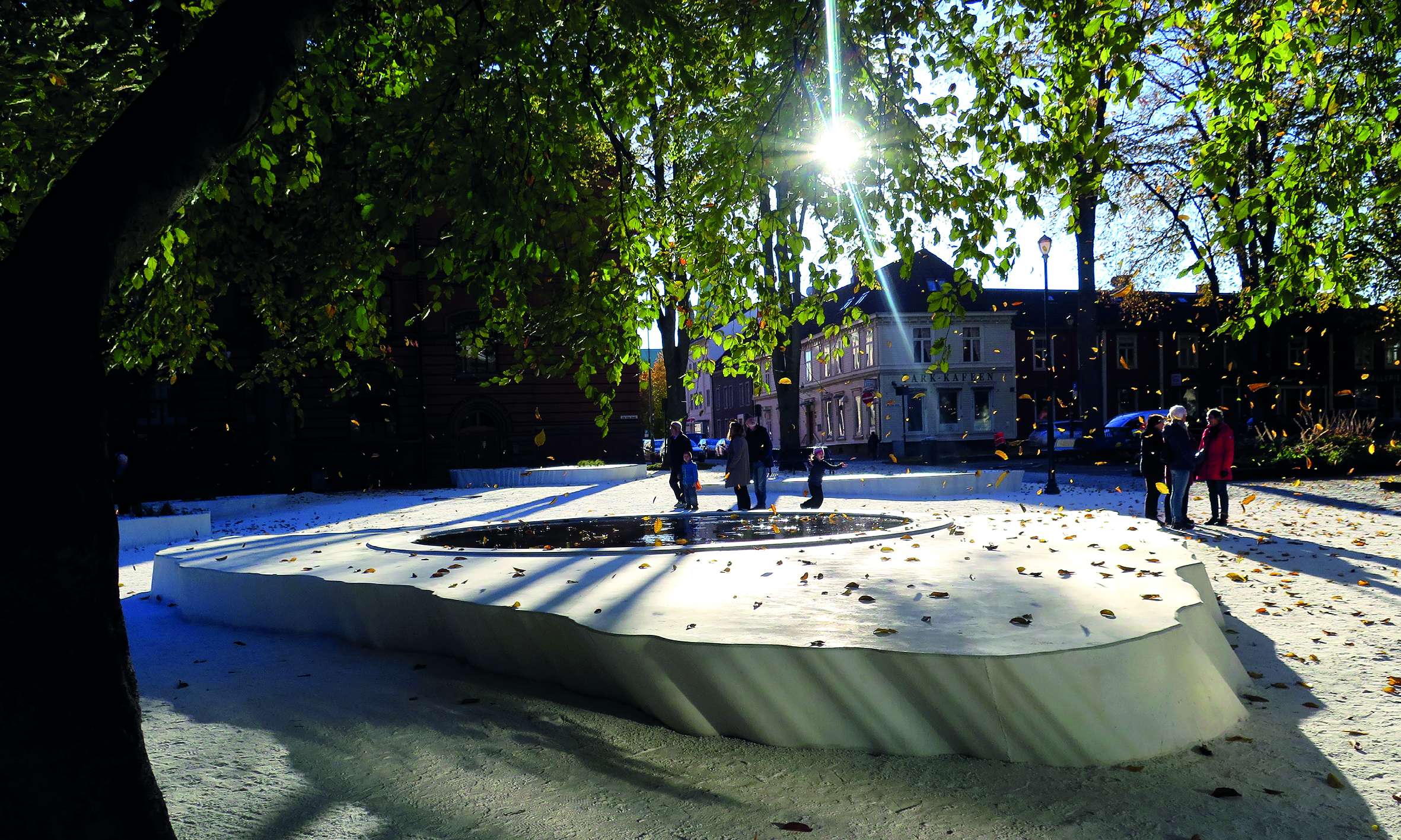 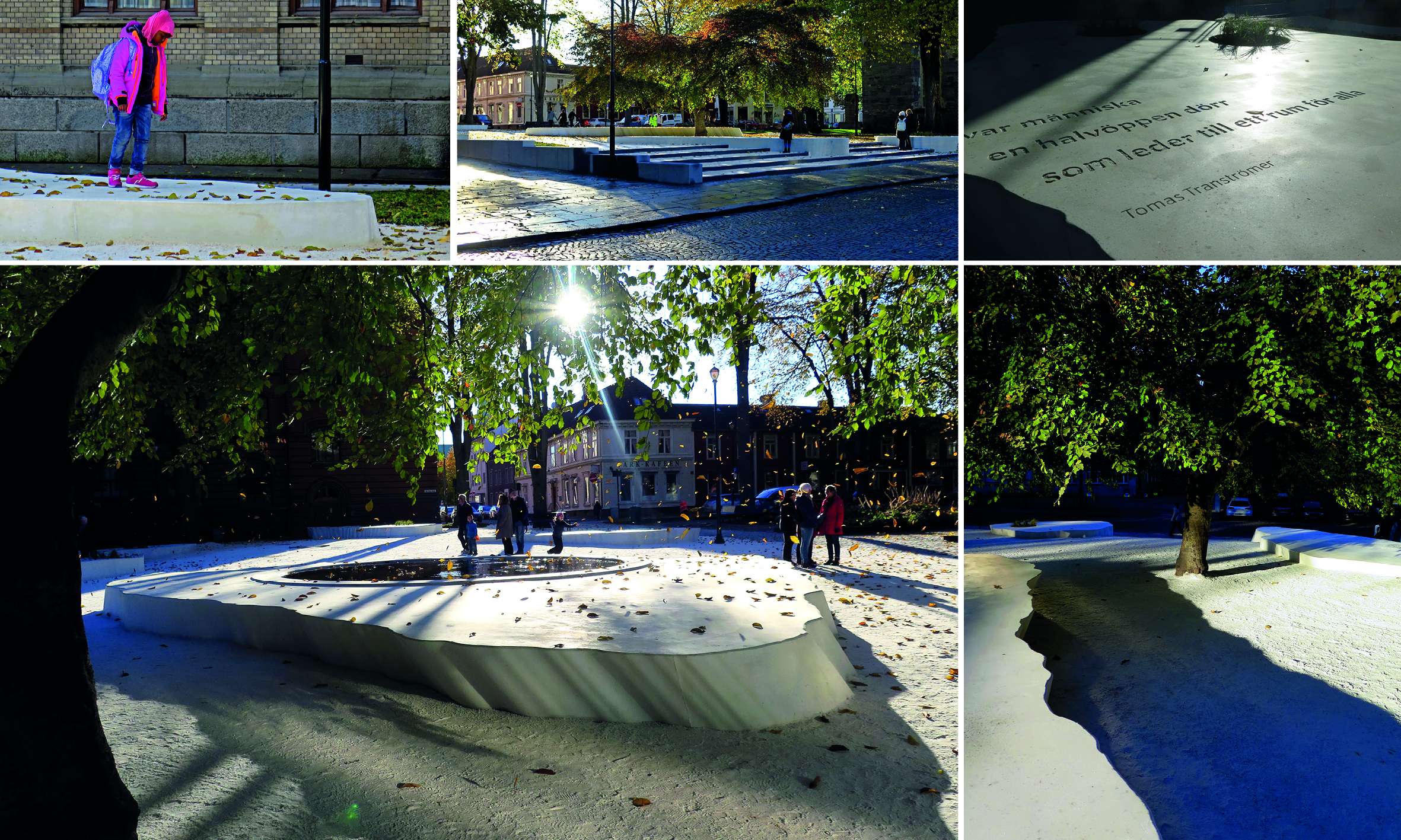 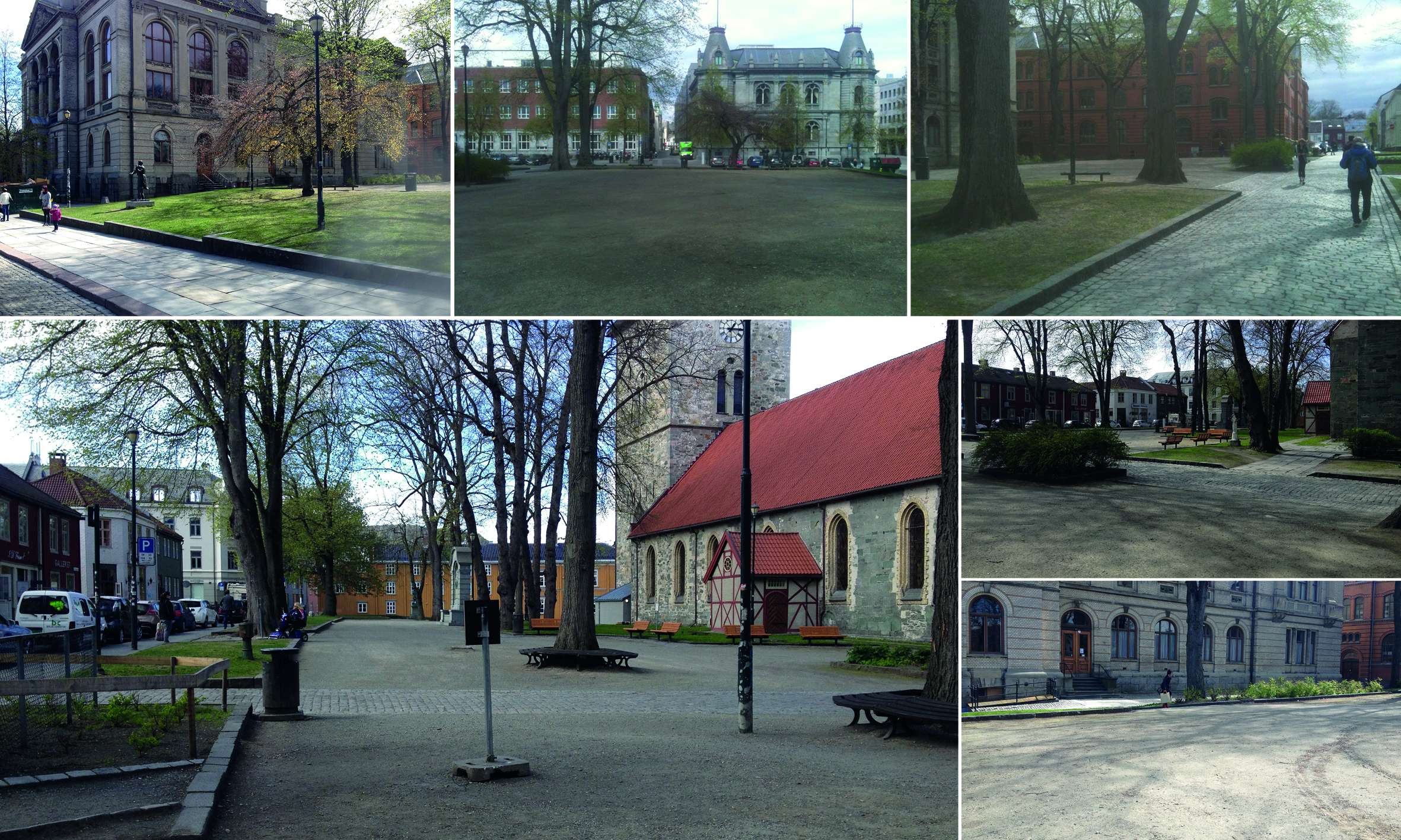 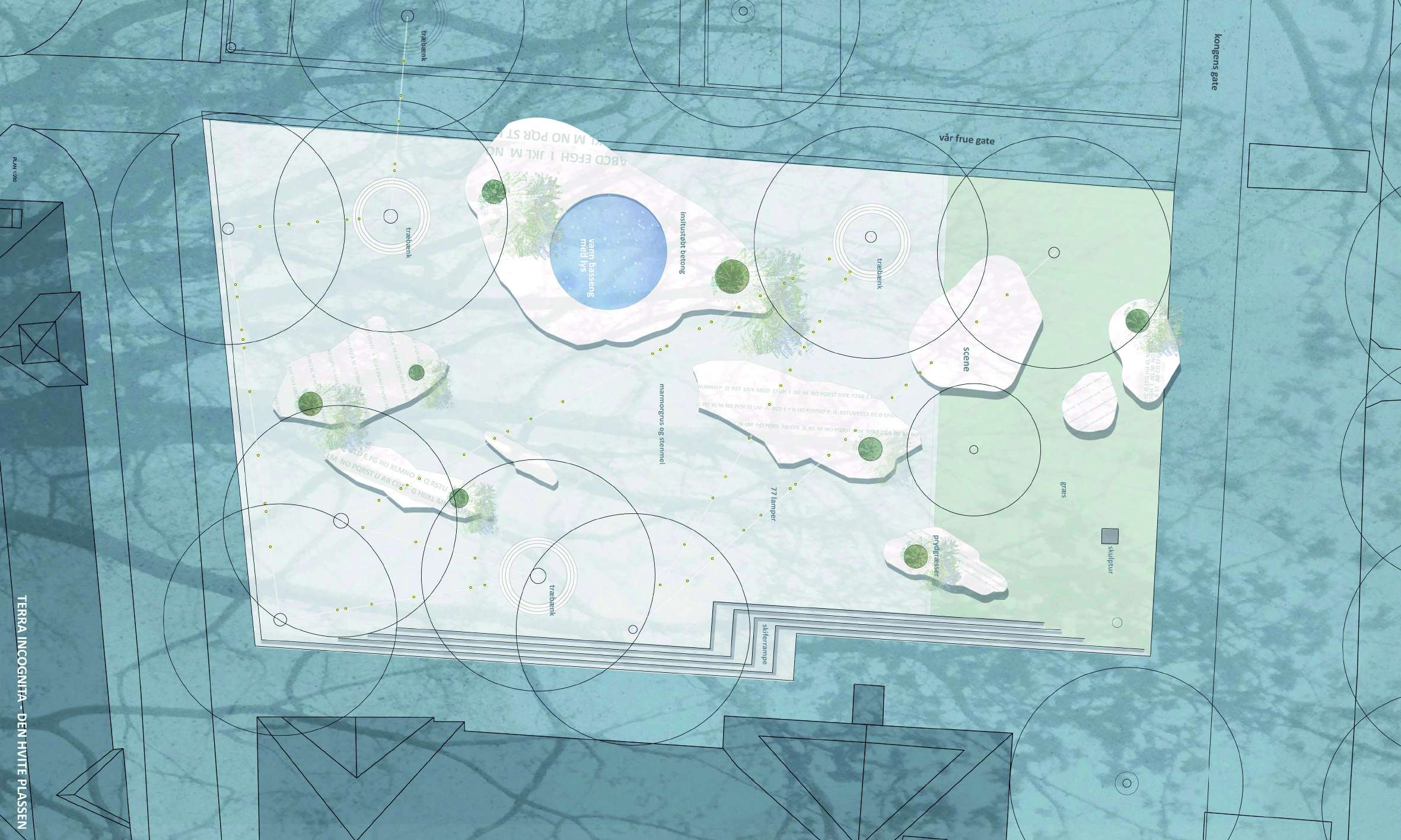 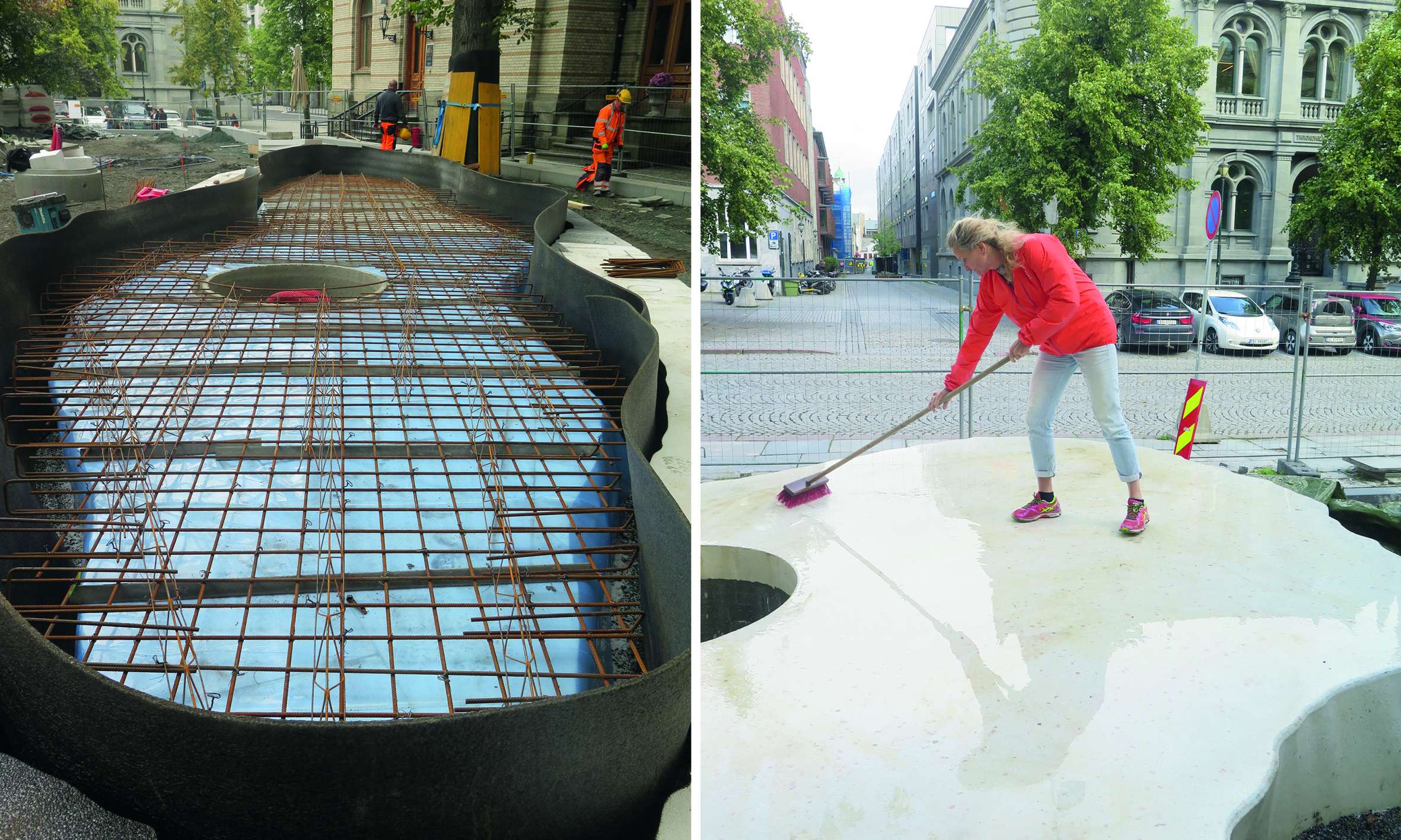 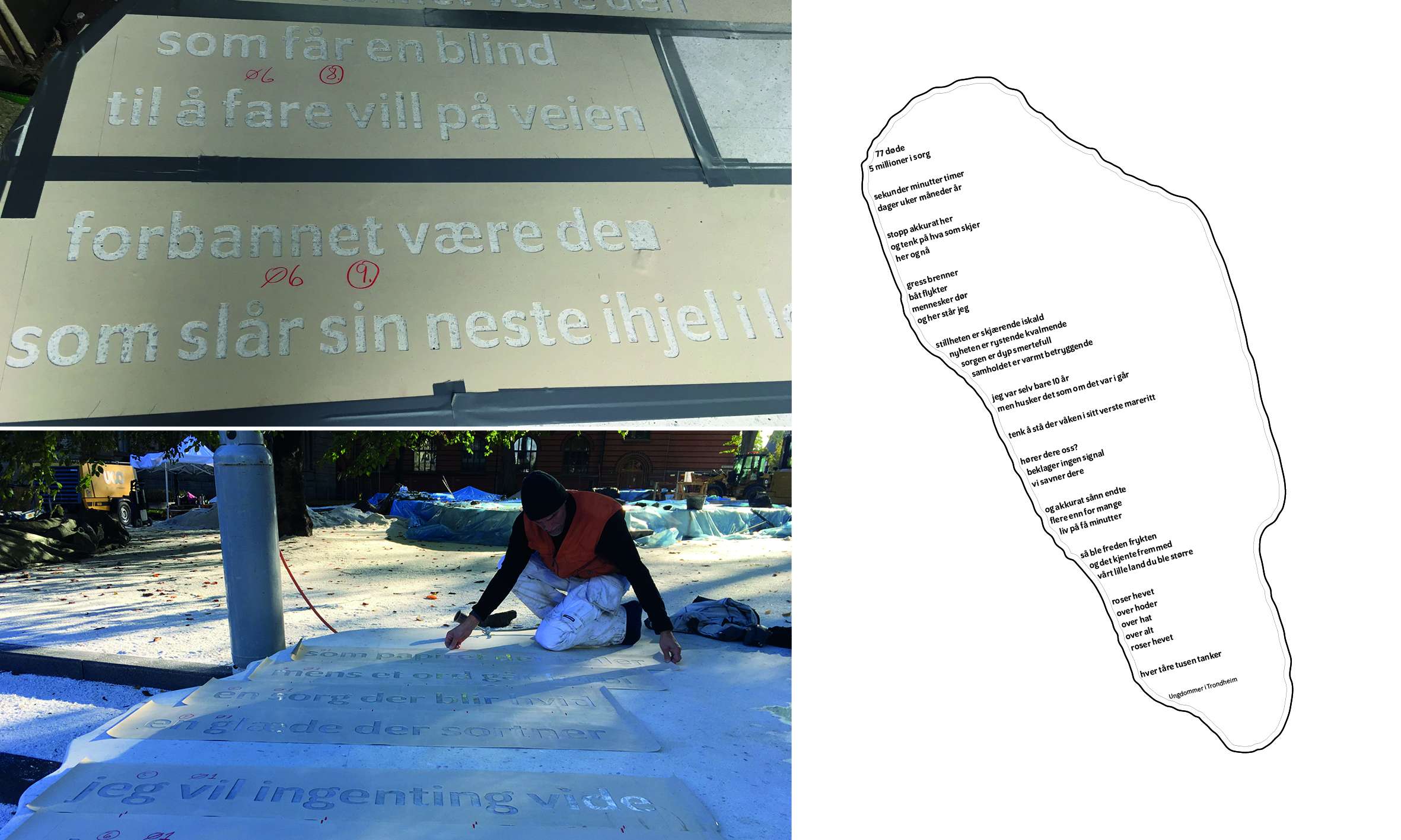 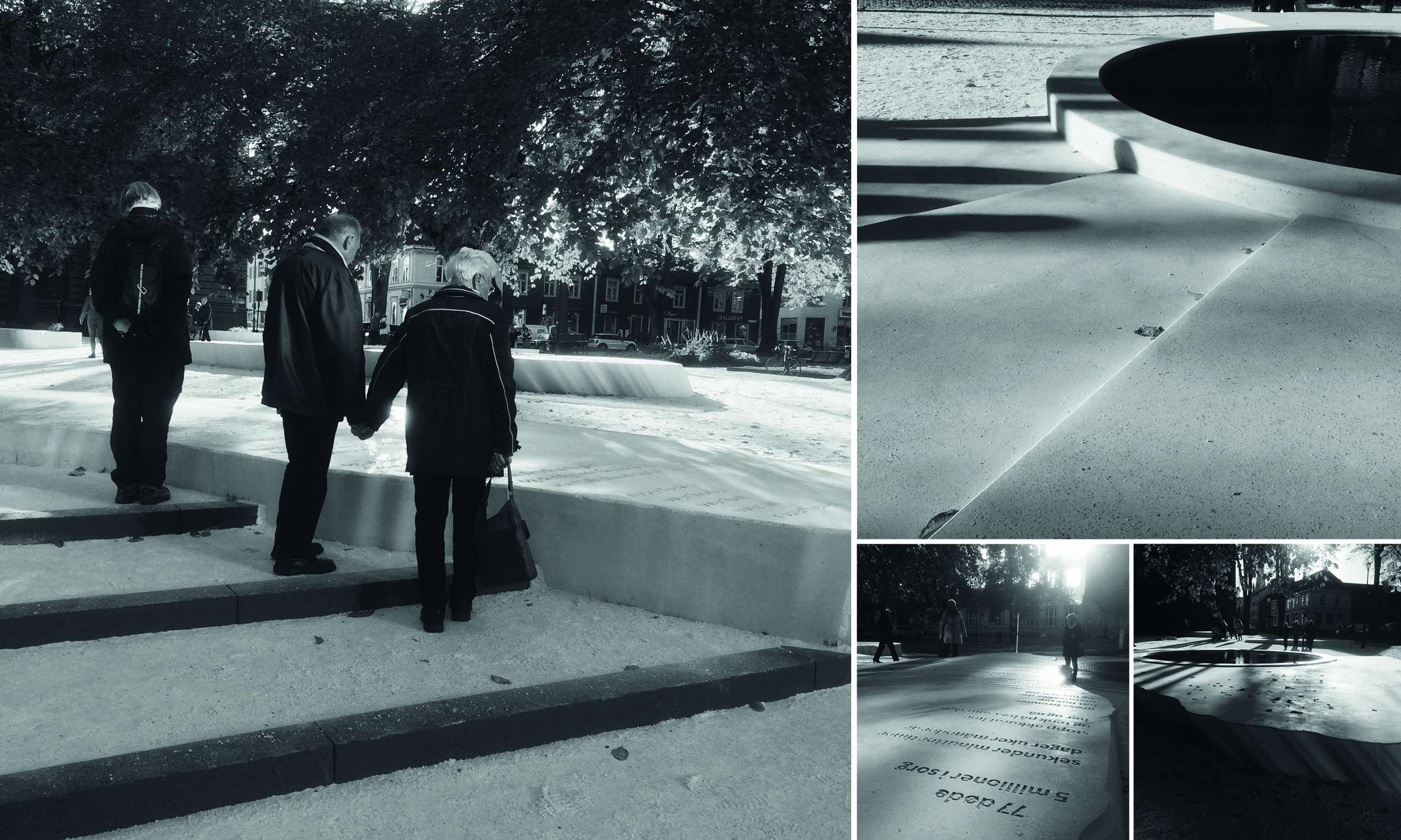 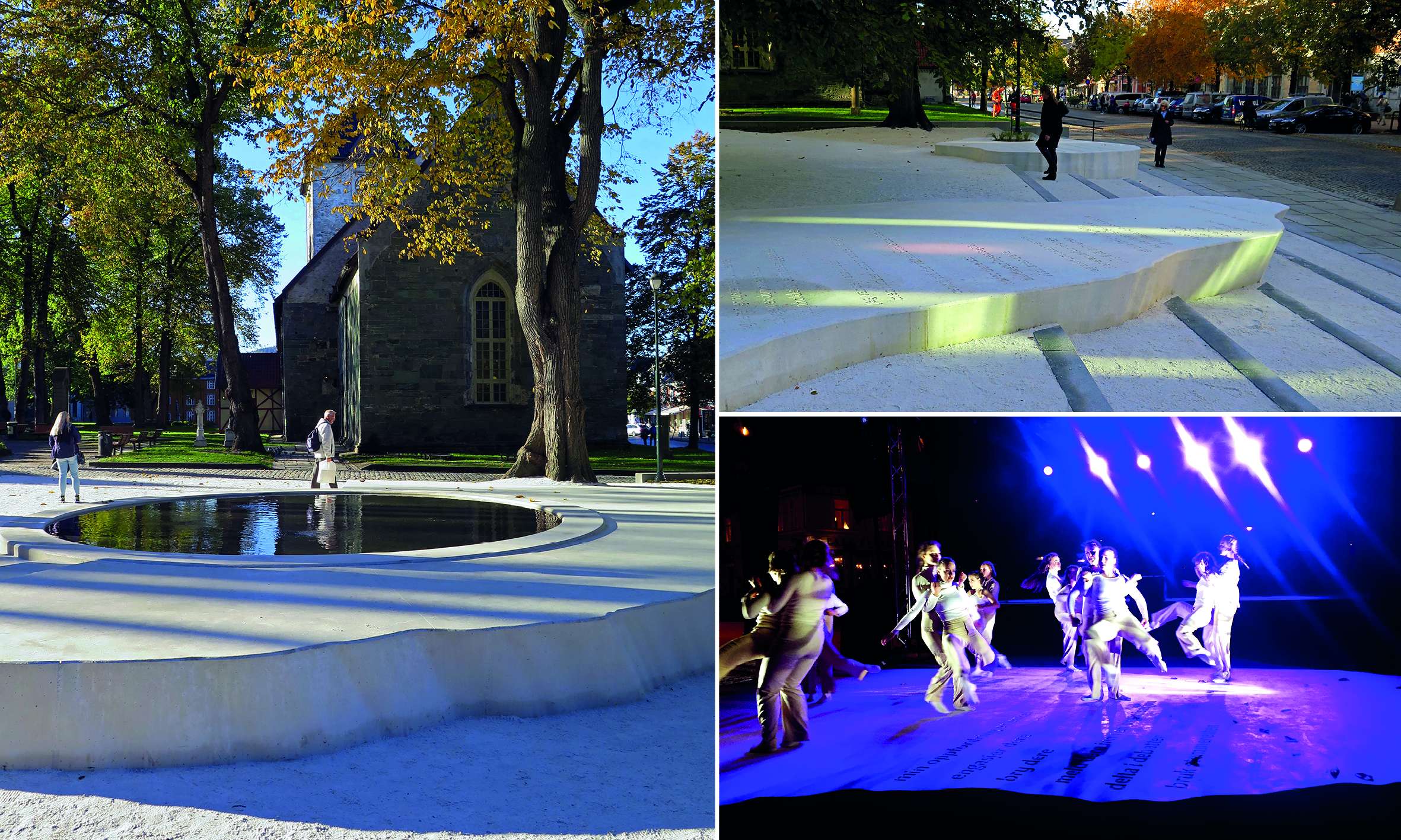 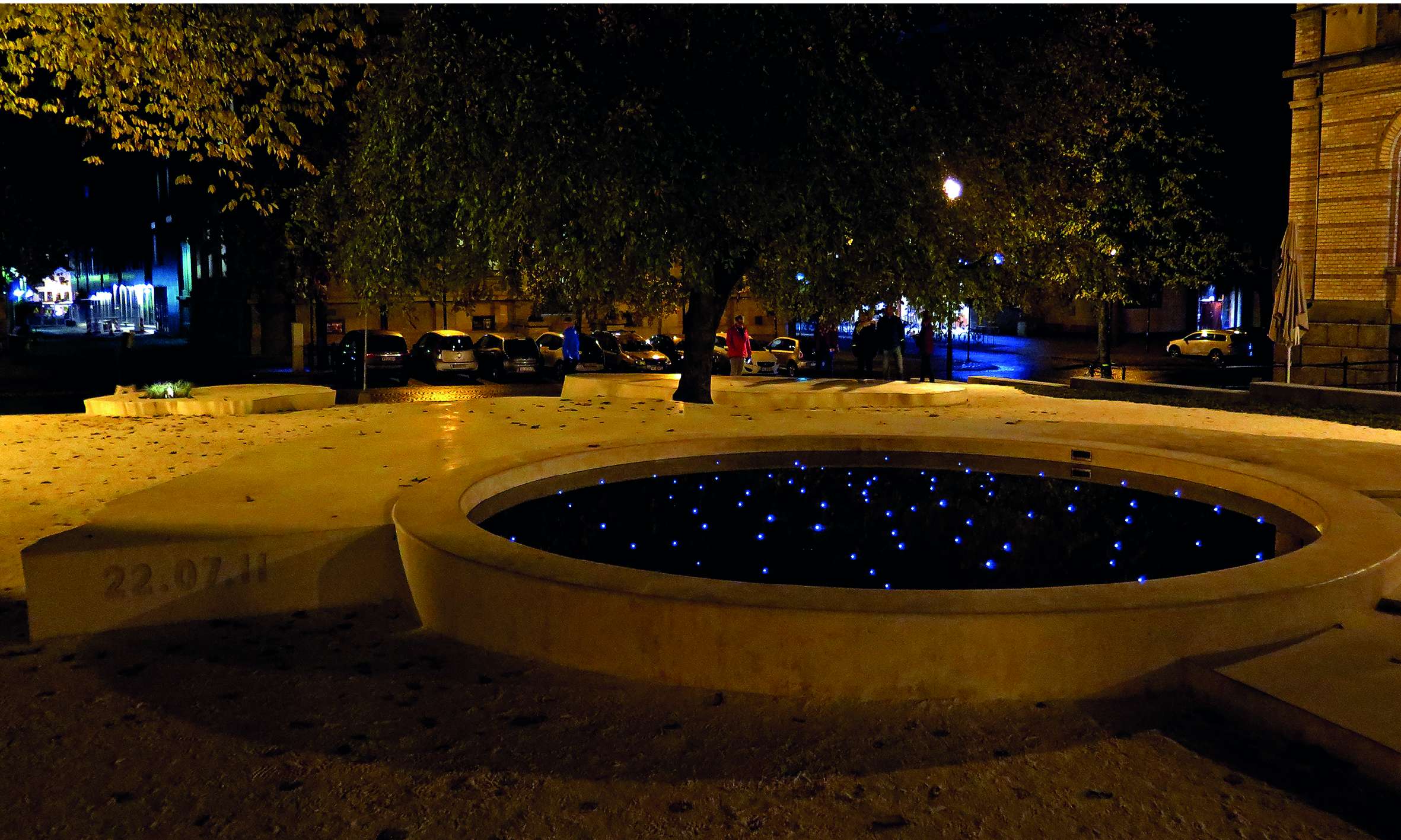 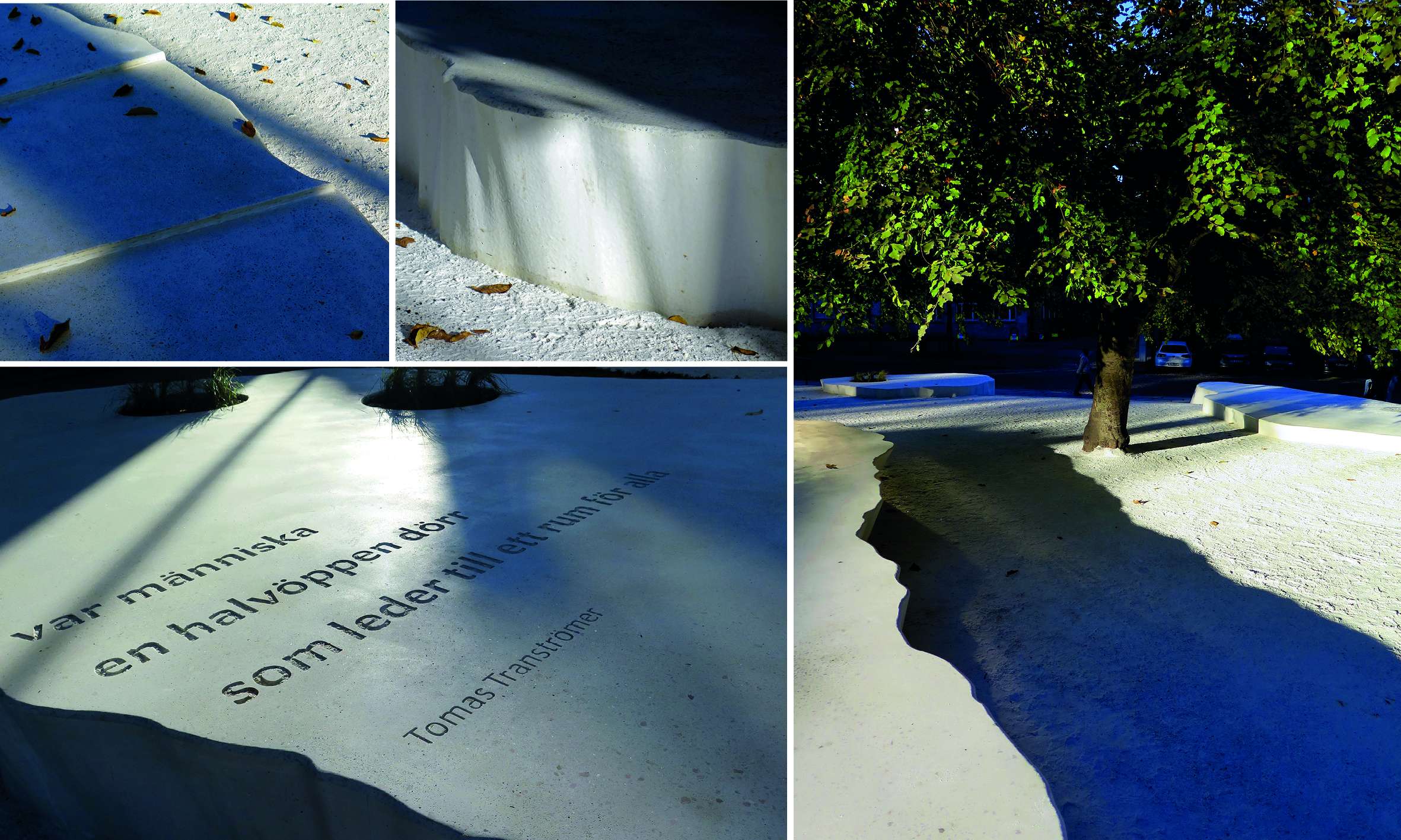 The July 22, 2011 terror attack in Oslo and on the island of Utøya created a deep fissure in our concept of reality. A tragedy for so many individuals and families, a trauma for society at large.

An unknown territory suddenly revealed itself in the midst of our shared social and political lives. A new and unfamiliar situation arose to which we are forced to come to terms with. Old maps labelled unknown, yet unexplored areas as “Terra Incognita” – unknown land, and were indicated by white areas. Grief has no nationality, it is borderless by its nature, like love. White is the color of love, hope and peace. Therefor Trondheim’s 22 July memorial is titled Terra Incognita.

White crushed marble. A horizontal organic topography of white concrete forms seven islands spread across an area of approximately 2000 m2. Texts are carved into the surface of the concrete islands. An open stage for public ceremonies and events. A shallow pool with 77 points of light embedded in its black concrete floor – one point of light for each person who lost their lives in the attacks on 22 July 2011. Plant beds with white flowers bloom during spring, summer and autumn.

We have focused on creating an inviting and open memorial site for Trondheim’s residents and visitors to use and fill with their own events and activities. The memorial is an inviting, calm and dignified place in Trondheim’s old city centre. It is an unexpected break in a cityscape that allows thoughts to flow freely. A visual and spatial oasis that encourages one to pause, alone or together with others. The many nuances of white in the different materials define and frame the memorial site.

A firm gravel covering of local white Norwegian marble creates the memorial´s floor and visual resonator.  A stylized archipelago of in-situ cast white concrete formations spreads across the site like islands on the white gravel. The concrete islands vary in size and height up to sitting level, and they slope with a 1.6% steady grade toward the street Kongens Gade. At the west side of the memorial facing Vår Frue Church one of the islands forms a large stage for concerts, festivals and ceremonies, for large and small public events. To the east the memorial meets the Freemason lodge with a low granite wall that incorporates the topographic variations of the landscape, and to the north it meets the street Kongens Gade with a new step formation that leads from the street directly up to the site.

A garden of thoughts and senses

Terra Incognita is a garden of thoughts and senses, with old and tall elms, a low copper beech, and creeping plants that bloom during the spring, summer and autumn. High bouquets of decorative grass (Miscantus Sinensis) grow in cutouts in the concrete islands, and Grønlandsmure (Potentilla Tridentata) grow along the edges of the site.

The tall crowns of the elms provide a green filter for the daylight. All around the bright site, the city’s many nuances become clearer, more distinct; they are evoked in the interaction with the white marble gravel and the concrete islands: the sidewalks’ grey-green shale; the 13th century stone façade of Vår Frue Church; the play of light and shadow on the sand-colored Freemason lodge and on the school building´s dark red brick wall to the south.

Cast into the largest concrete island, app. 900 x 1500 x 60 cm, is a round shallow pool that reflects the sky and tree tops during the day, and during the night transforms into a starry sky with 77 points of light. Embedded heating cables in the pool floor ensure the water will not freeze, and on cold winter days mist rises from the pool like a fog.

Sandblasted into the surfaces of the concrete islands are words and texts that relate to the ethical, social and political values that were attacked on 22 July 2011: openness, respect, democracy, empathy, humanity, belief in the future, love. The texts refer in different ways to the events of 22 July in Oslo and on Utøya, but also function as mental bridges to a poetic and creative dimension of reality, that can give hope and a belief in the future to the current and coming generations. Some of the texts are written by school children in Trondheim, others are written by well-known authors. The texts also have an aesthetic function as graphical ornamentation in the concrete topography, and they allow the islands to be experienced as torn out, enlarged pages from a book spread out in the memorial, where both existential and everyday thoughts and feelings linked to 22 July are given spatial and material form.