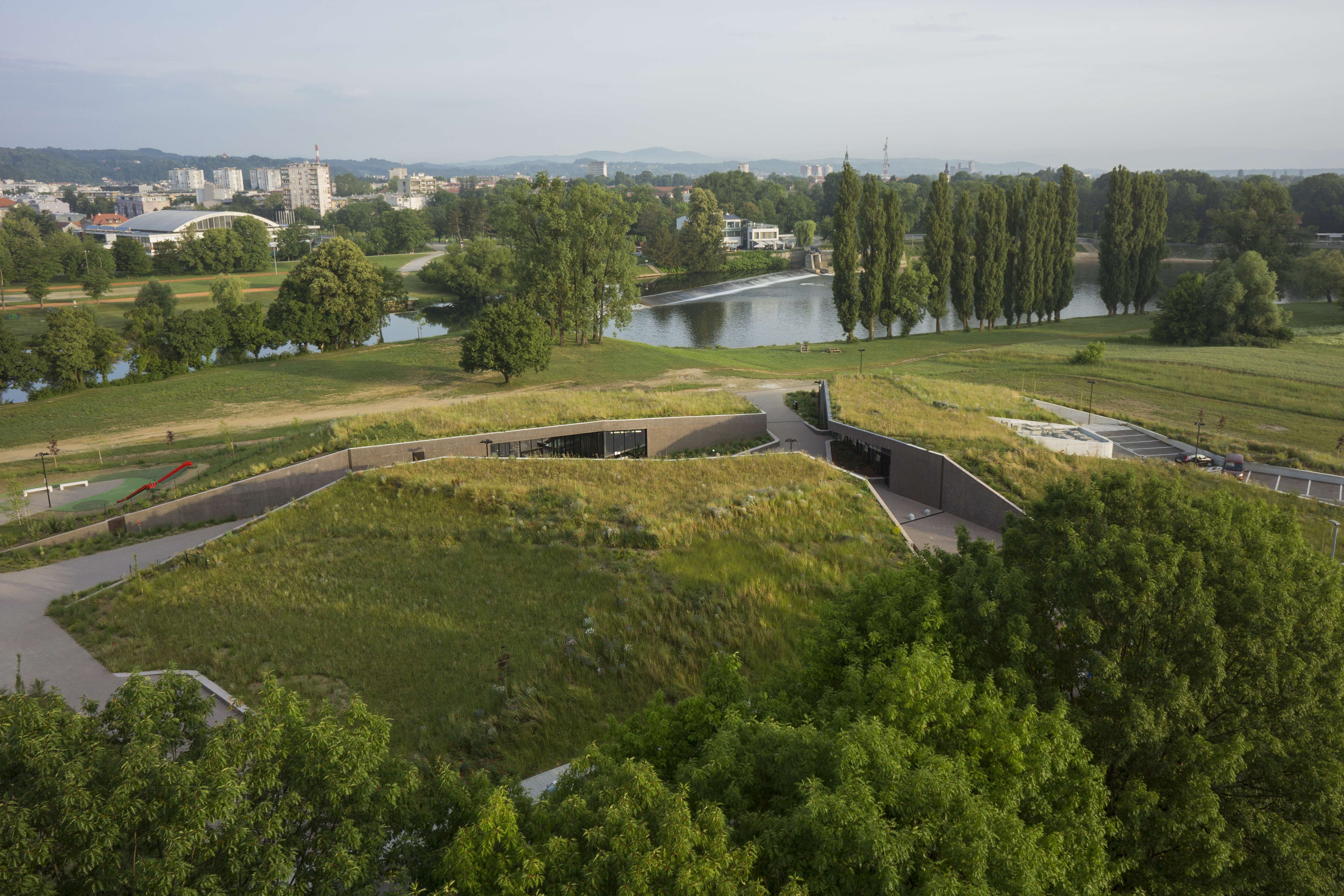 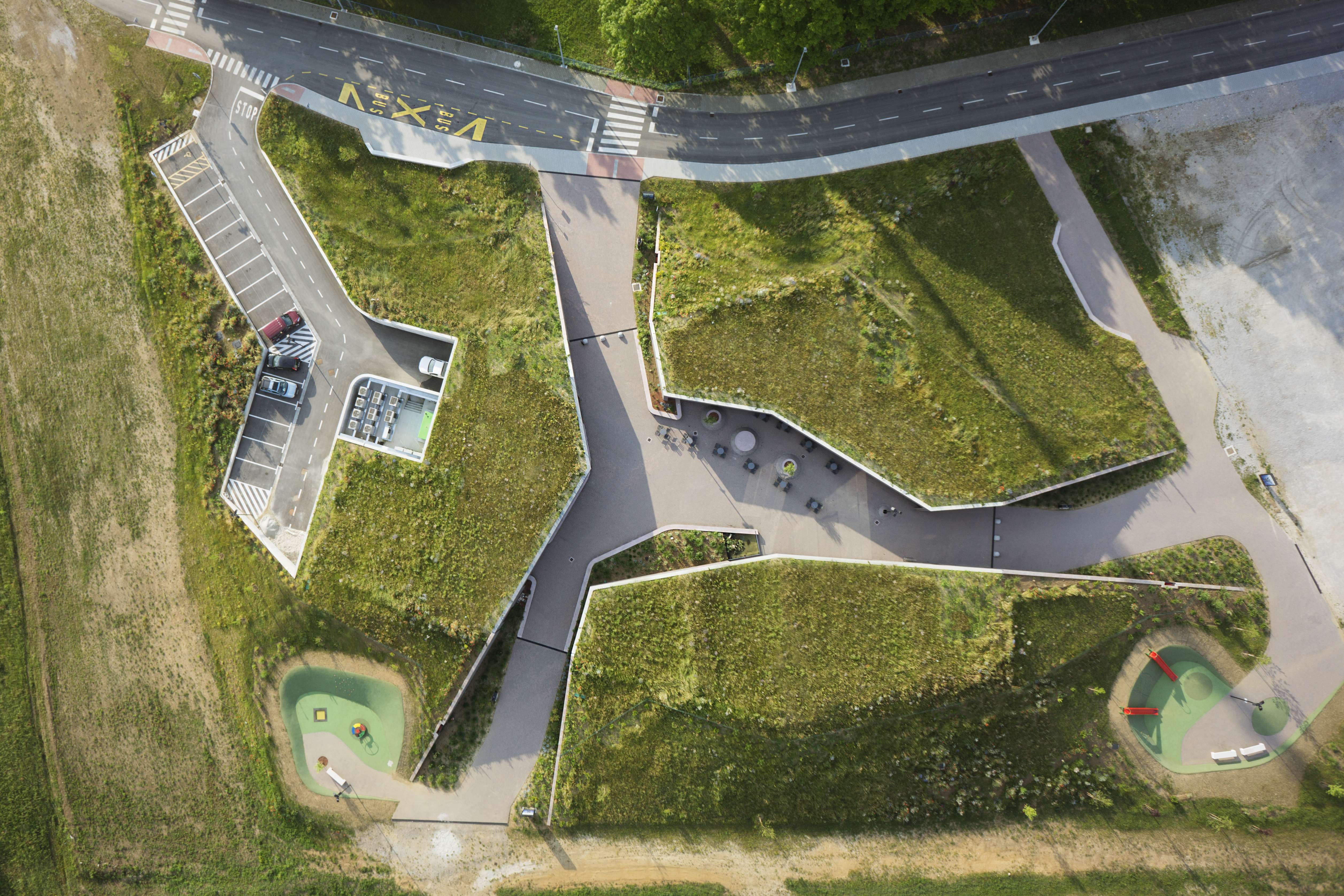 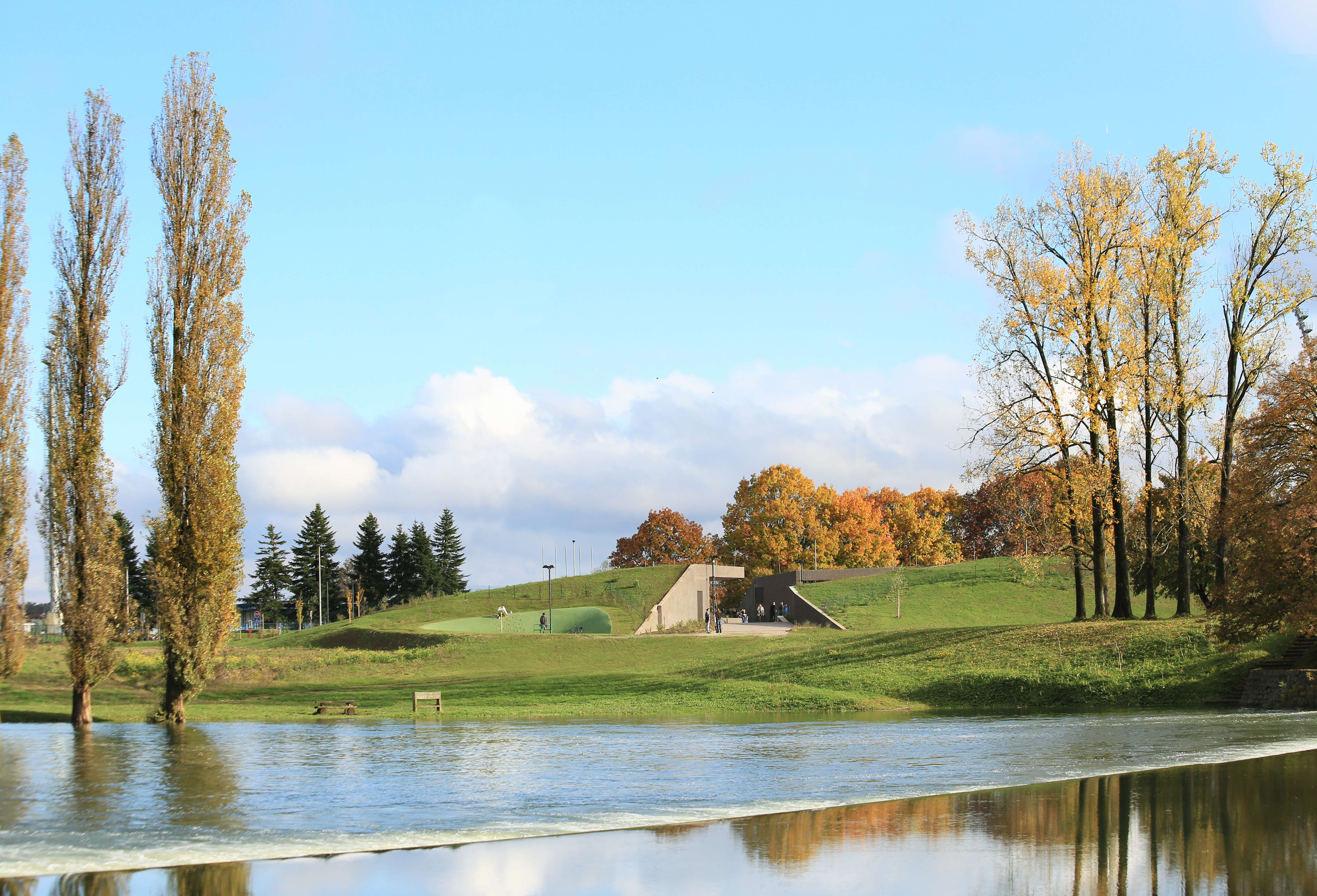 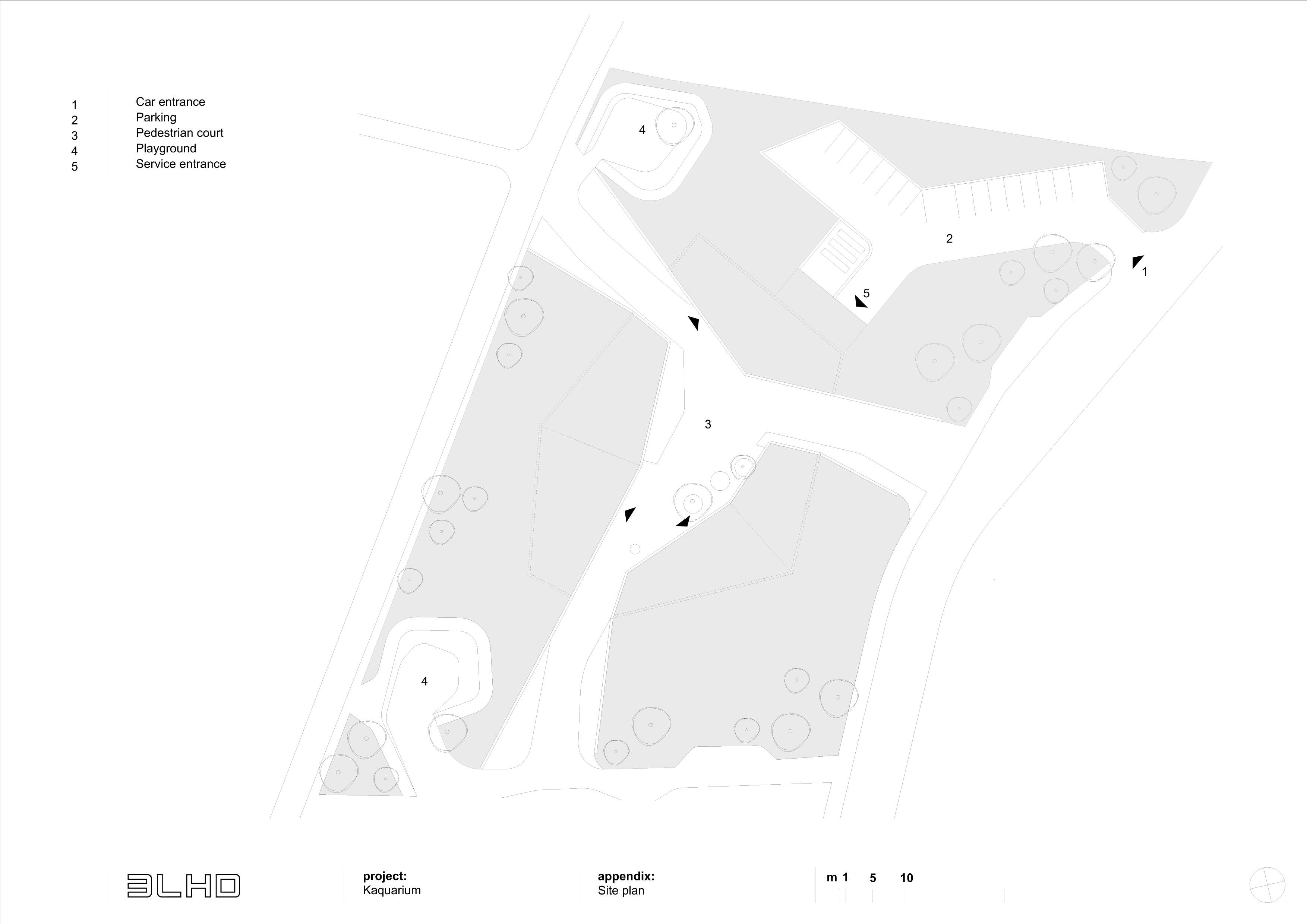 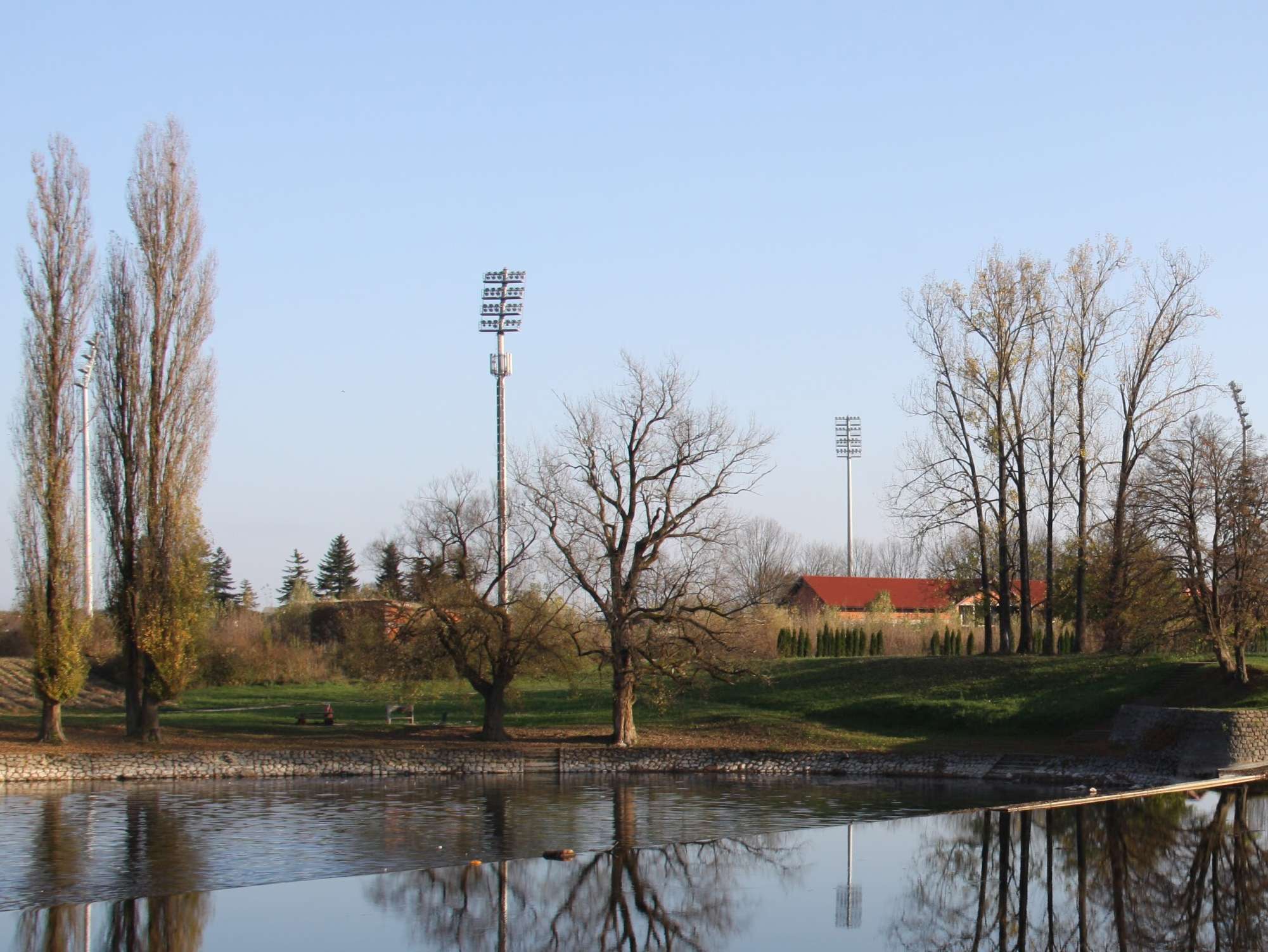 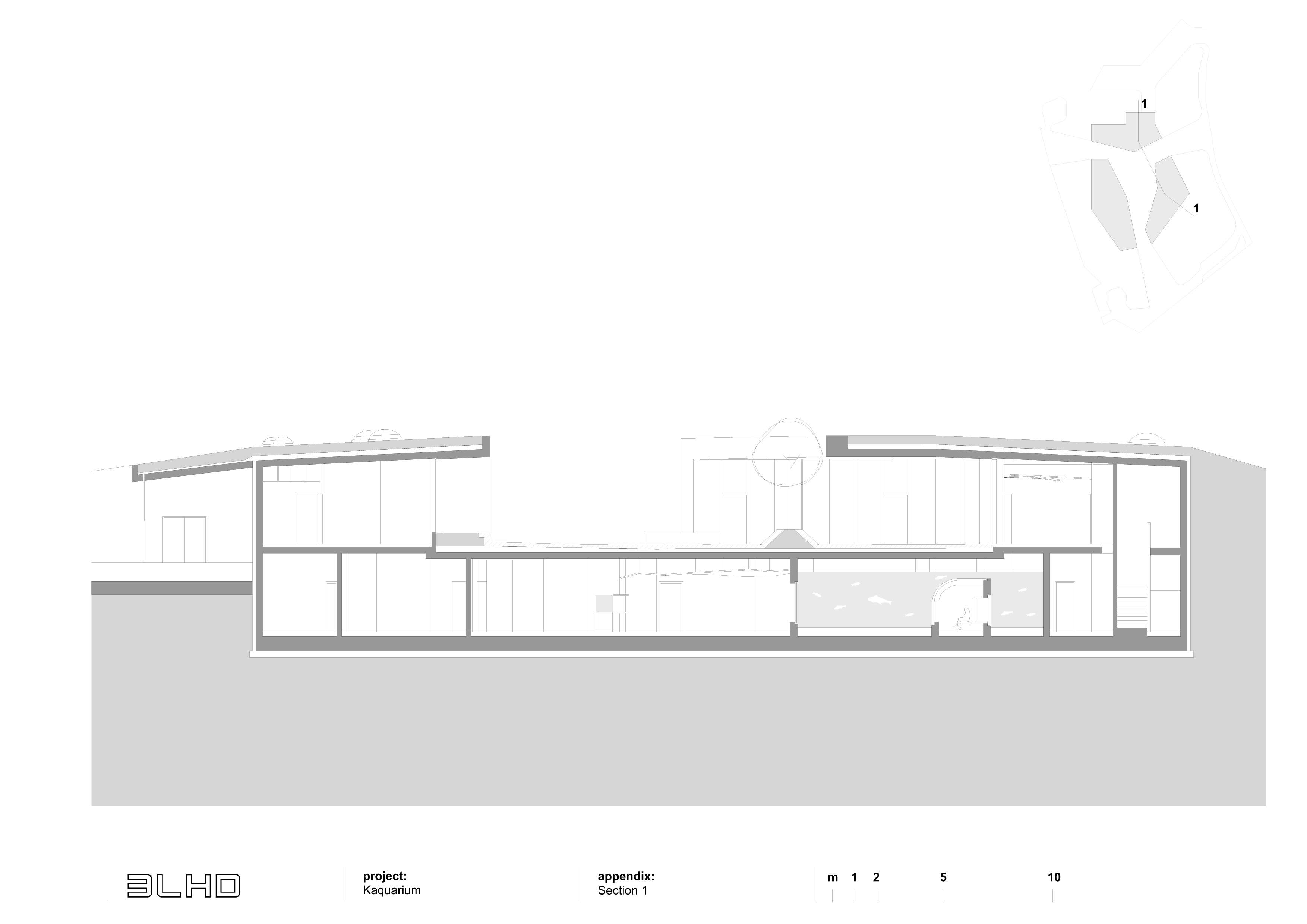 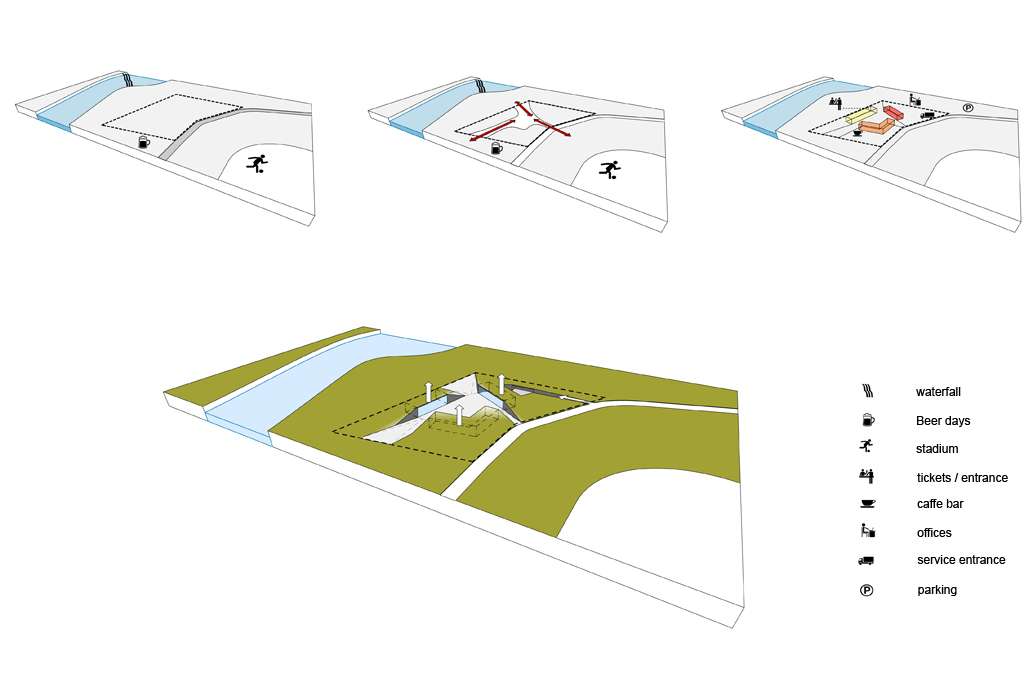 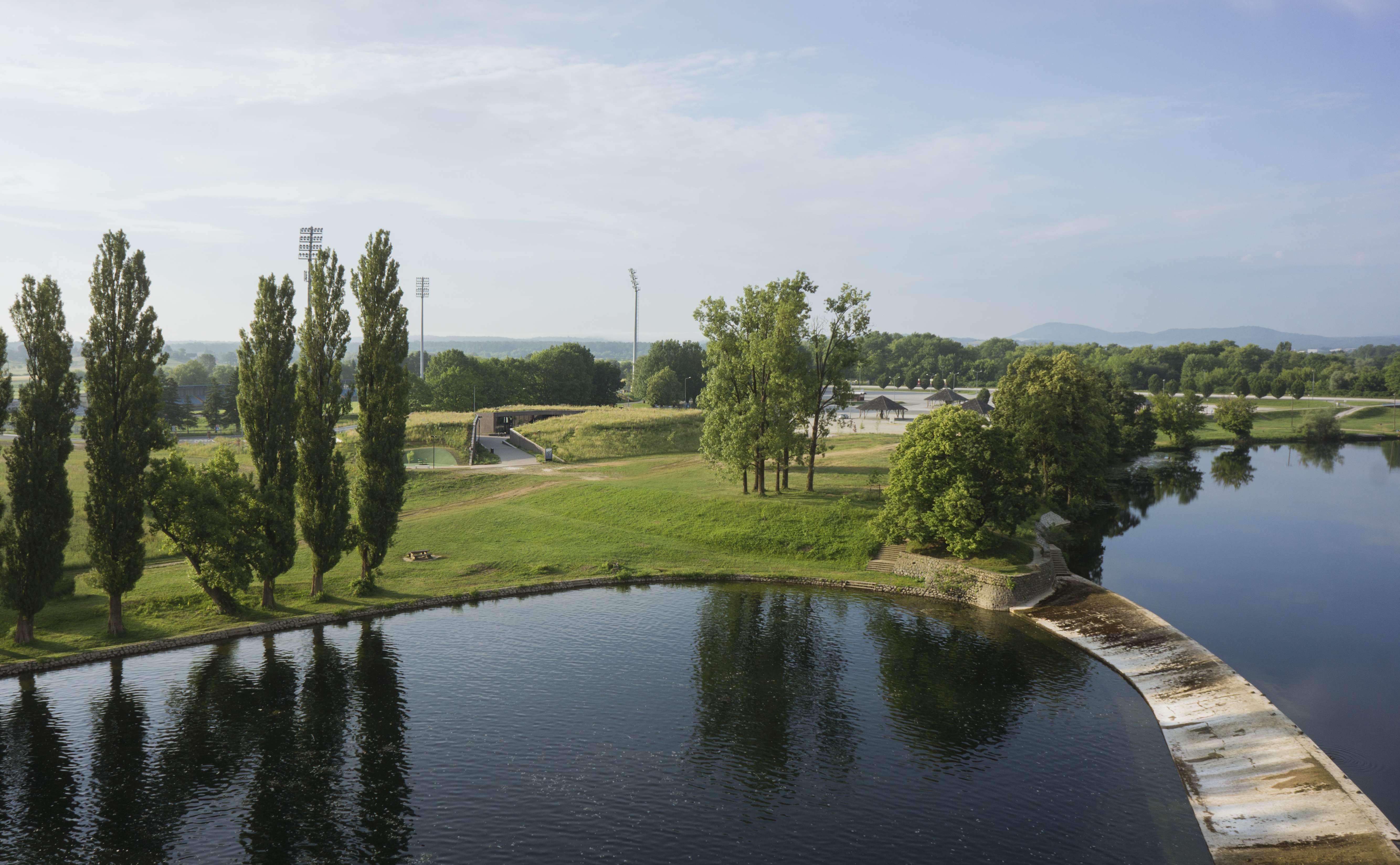 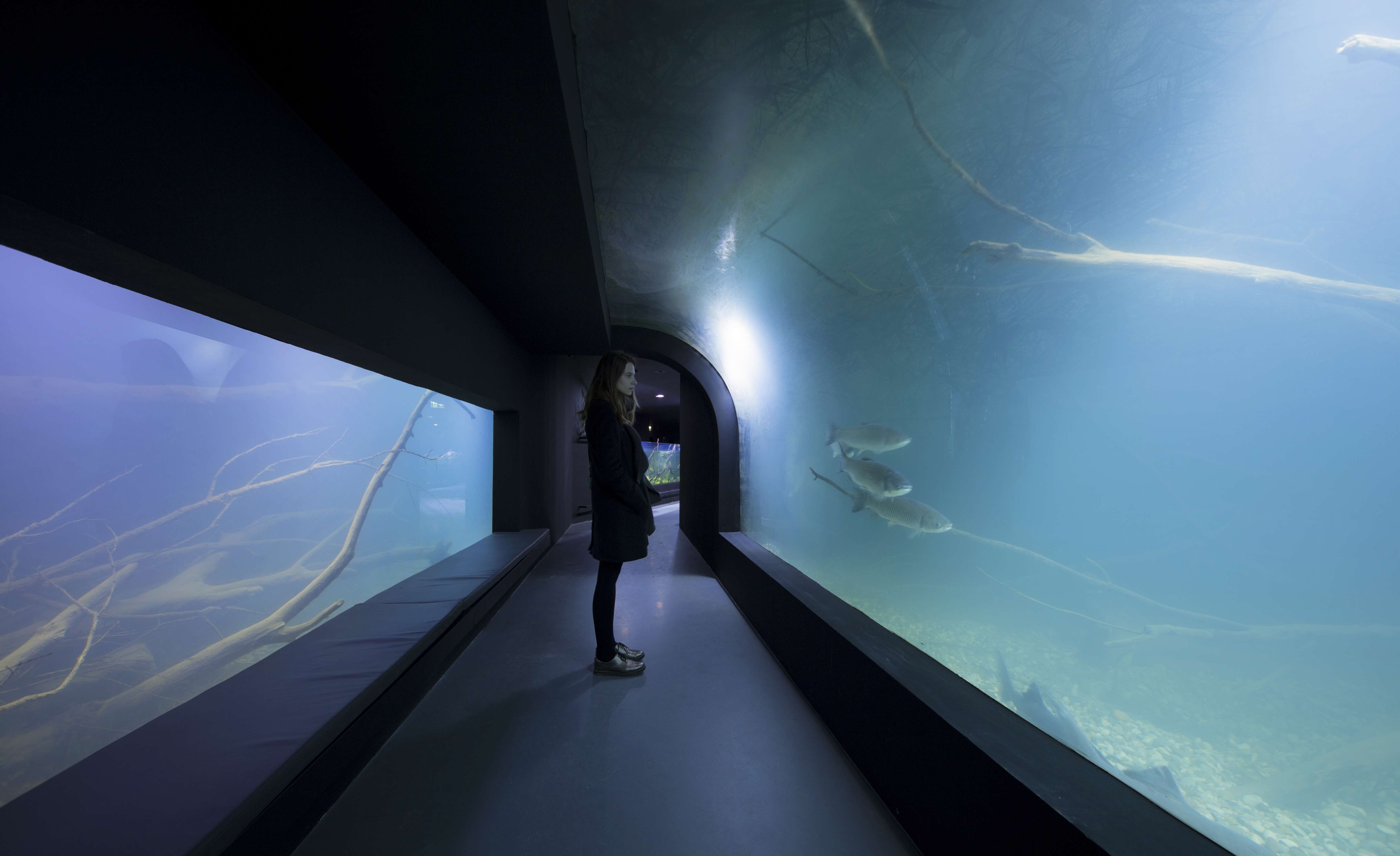 * PREVIOUS STATE
The Karlovac Freshwater aquarium is located on a planned but abandoned campsite by the River Korana, approximately 5 minutes of walking distance from the city centre. It is surrounded with a green landscape – football stadium on the west, a public space for gatherings, fairs and concerts on the south and uncultivated agricultural land on the north. The location is adjacent to the wider city centre with a promenade and numerous bathing spots by the Korana riverbank. The site (and the project today) is owned by the City of Karlovac (55.000 residents). The first idea from the client was to use the abandoned and half-destroyed campsite buildings for the aquarium facilities, but through a detailed analysis we came to a conclusion that they are not sufficient to house all of the new contents of the future aquarium. One of the risks for the future building was the fact that the location is a site of frequent flooding.

* AIM OF INTERVENTION
Karlovac is a city that lies on four rivers. It is a drive-through point for tourists on their way to the Adriatic coast, with a rich natural and cultural heritage connected to the element of water. The city government decided to apply a project for funding from the EU – a freshwater aquarium that would offer a new content to citizens and keep tourists in the city – an educational attraction with an exhibition that displays the flora and fauna of Croatian rivers and their ecosystems, geological history and traditional culture. The EU acknowledged the idea and decided to support the project. Strict deadlines, limited and continually controlled budget and a demanding technical nature of the project were all important elements in the process. A large number of participants collaborated on the project – from aquarium technology, aquascaping, fish protection and special lighting experts and consultants, to biologists, veterinarians, teachers and designers that developed the educational and scientific part of the exhibition. The City had a number of partners that were involved in the project development: Croatian veterinary institute, Croatian institute for biodiversity, Pan - Association for Environment and Nature protection, Karlovac city museum.

* DESCRIPTION OF INTERVENTION
Inspired by the city’s historic center surrounded by defensive earthen walls and mounds, the Aquarium is embedded in the natural environment and covered with greenery. A square area is defined in the center of the building, and all of the facilities surround it: exhibition, reading room with a cafe bar and office spaces. The exhibition displays the flow of a karst river, its flora, fauna and biodiversity. It starts with a water surface on the square, and continues inside the building with a system of ramps that wind like a river down into the basement level. Aquariums are placed along, above and below the visitor paths. It ends with a system of cascading aquariums whose biotopes display waterfalls and a travertine barrier. Finally, a stairway and an elevator take the visitors to the entrance hall through the gift shop. A space for analysis of the technological parameters of water, a scientific research center and fish acclimatization spaces are located in the center of the layout. Since the project is in a zone of frequent flooding precautions were made to avoid damages to the equipment and the exhibition in case of larger floods. During construction Korana River rose to its highest water level in the last 100 years. Changes were made and the level of the basement ceiling was lifted above that high water level, insulation was made to ensure that the aquarium can only be flooded from above.

* EVALUATION
The aquarium has proven to be a great success in the past year and a half since its opening. In order to stay sustainable, it needs approximately 12.000 visitors per year. In the first year it was visited by over 100.000 people.
It has become a tourist attraction and a centre for public activities, workshops, kids’ shows etc. The citizens use it as a place for socialising, having a cup of coffee with friends, and taking a break from a riverside stroll. As a public institution, it was primarily created to meet the demands of children and youth, students, scientists, aquarists and local population – to create awareness of extraordinary biological diversity and to educate visitors. The project is a business opportunity for all entrepreneurs involved in it from the moment of its creation. Aquarium contributes to the achievement of the strategical goals of Karlovac: workplace concern, tourism in the function of city development and the higher quality of life for the citizens. It has received numerous awards: for architecture, accessibility, high quality tourist content and sustainability.