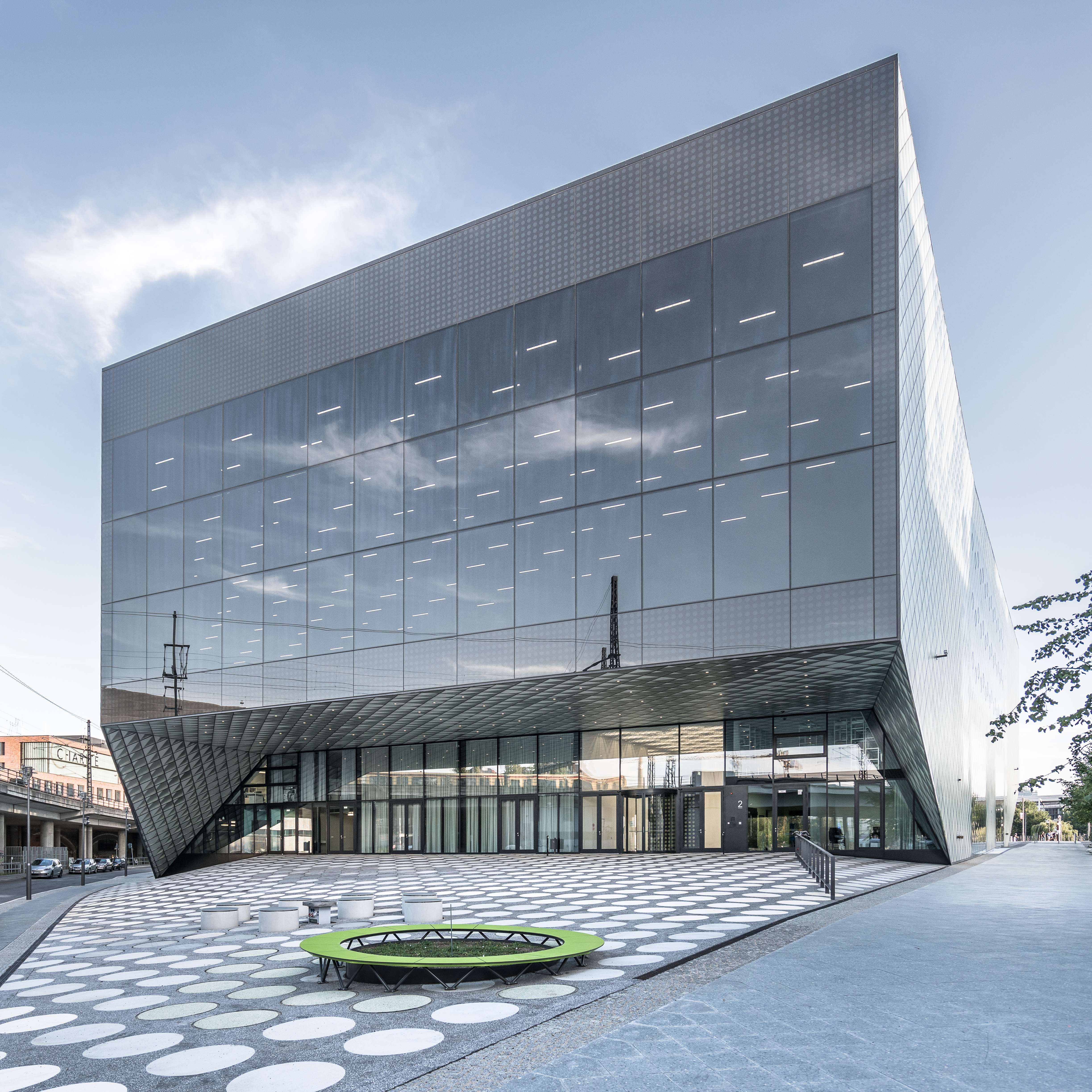 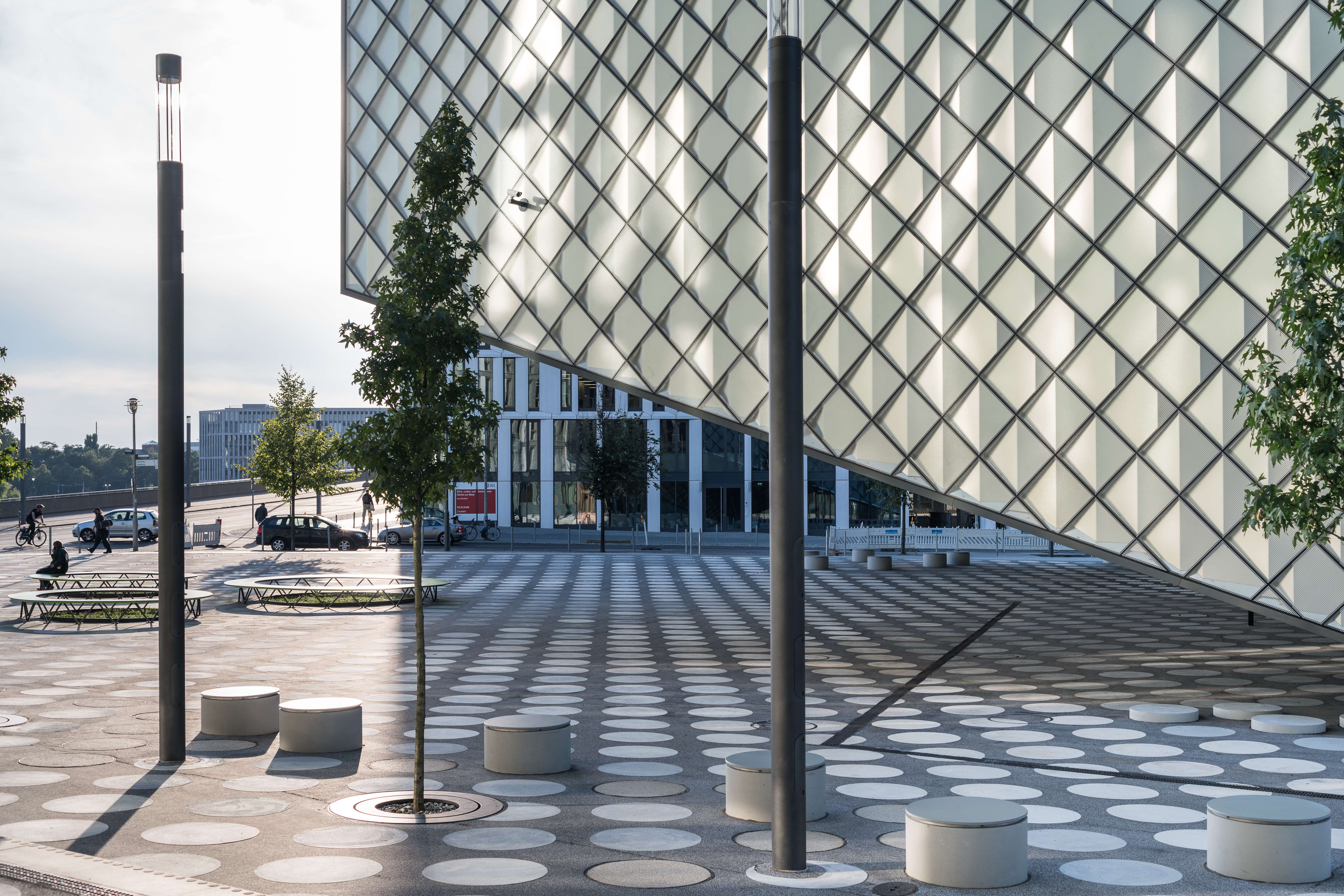 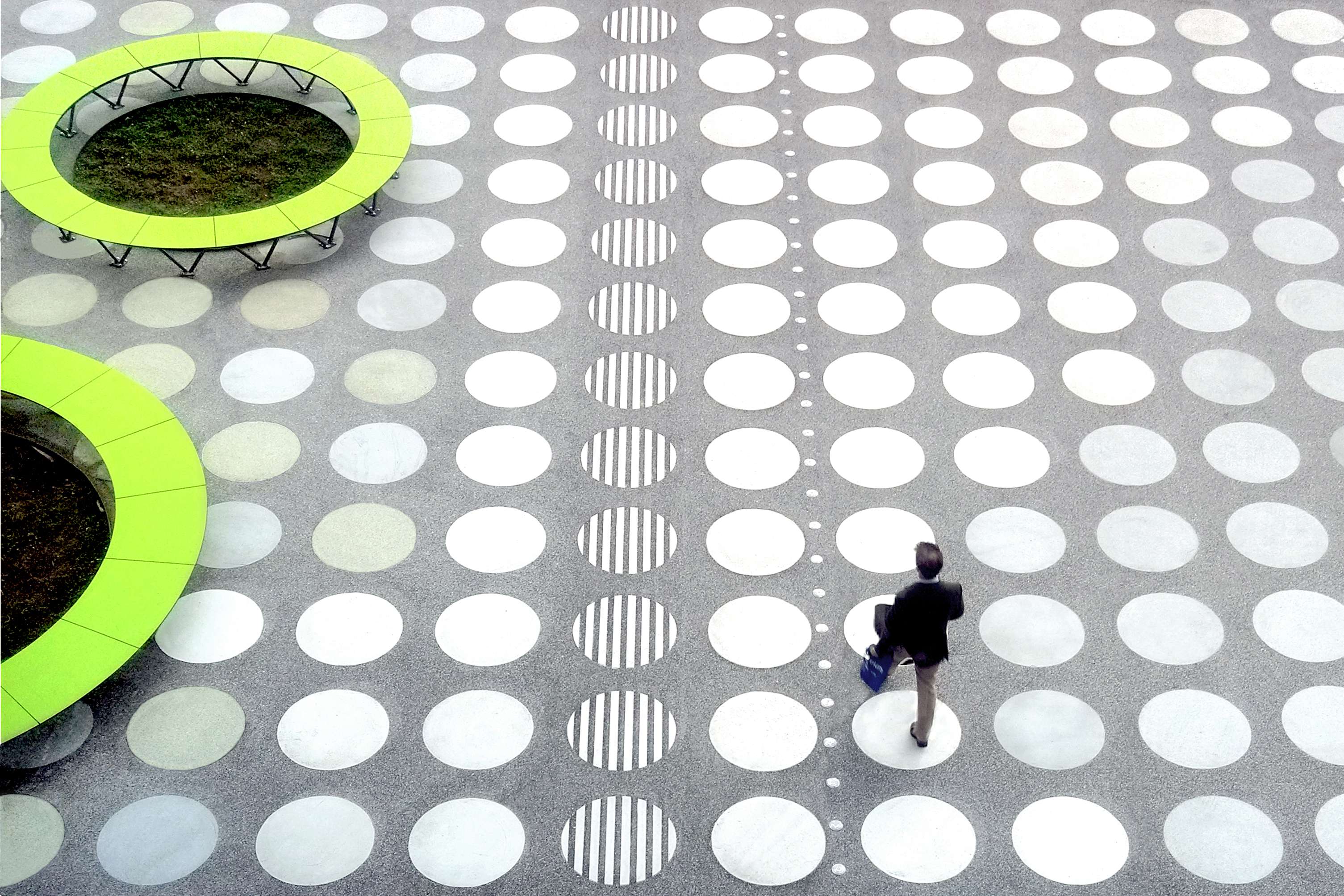 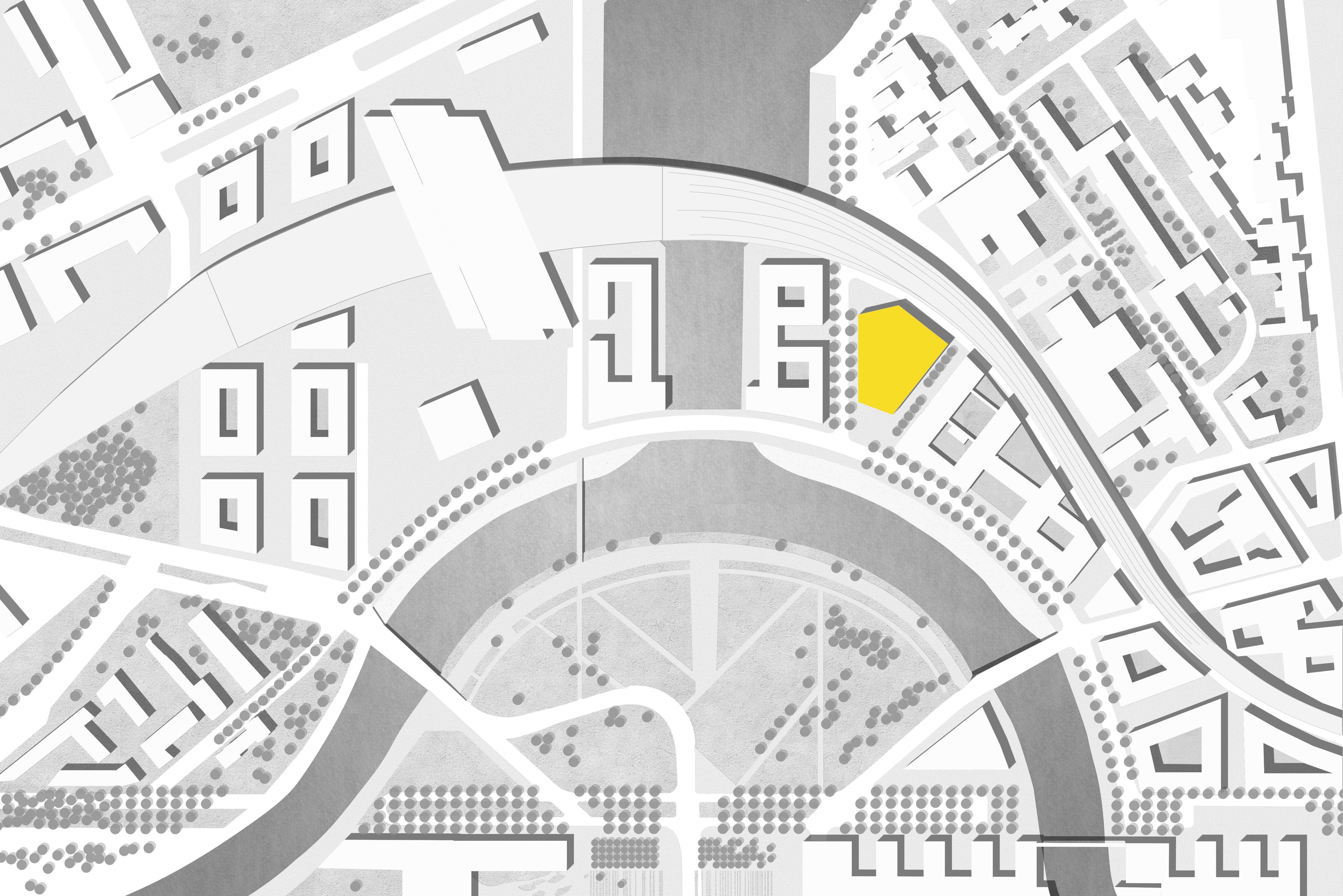 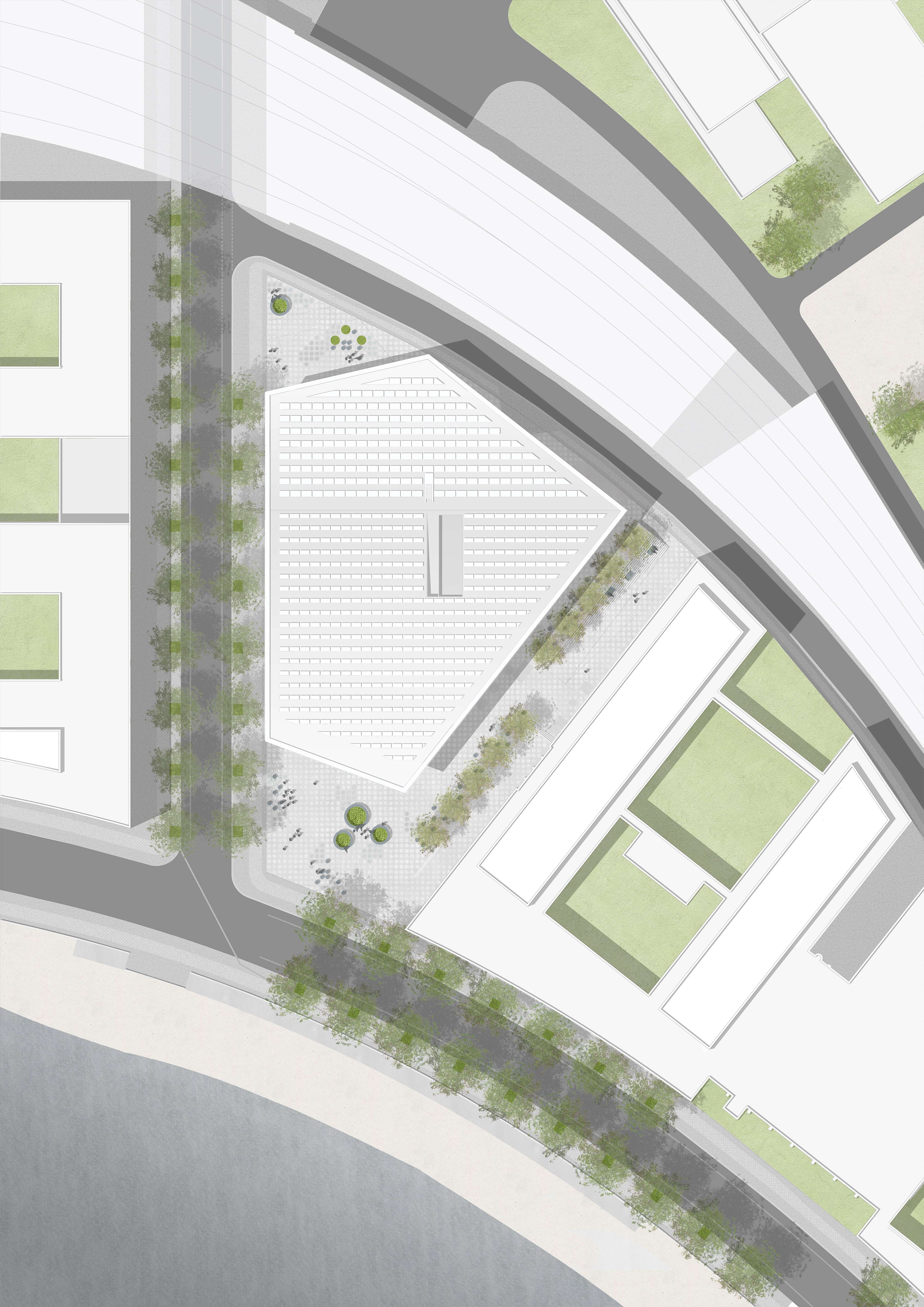 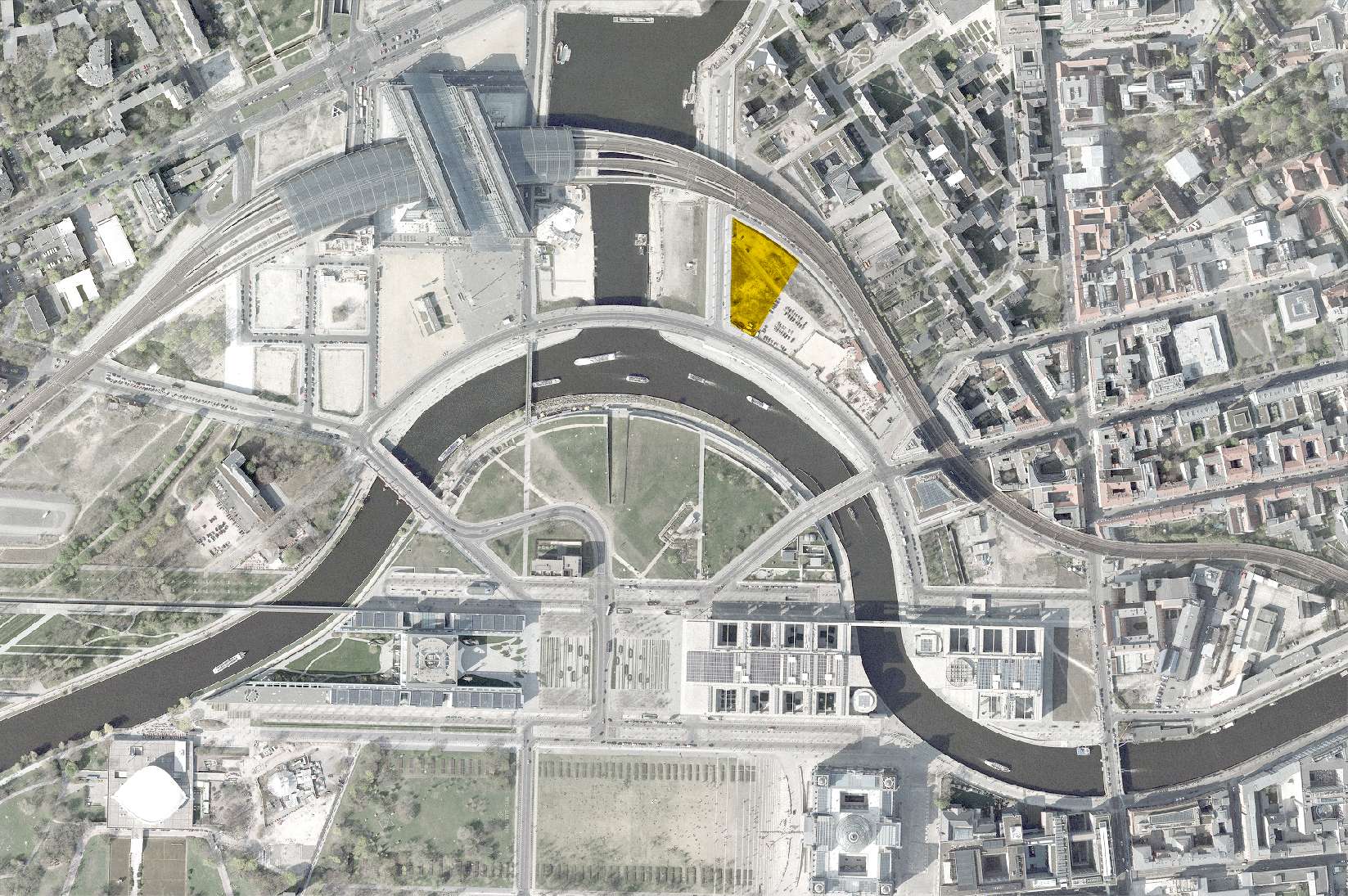 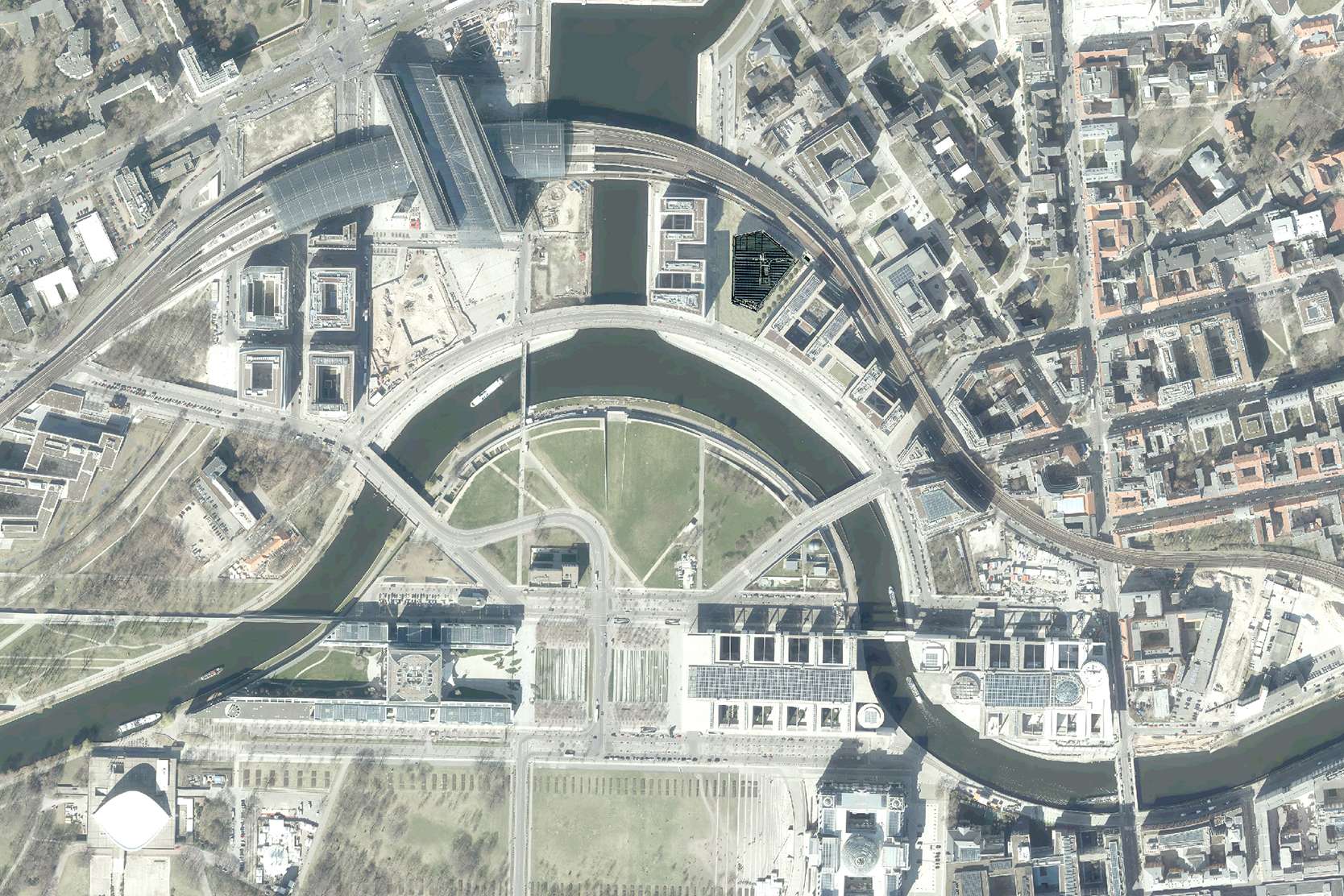 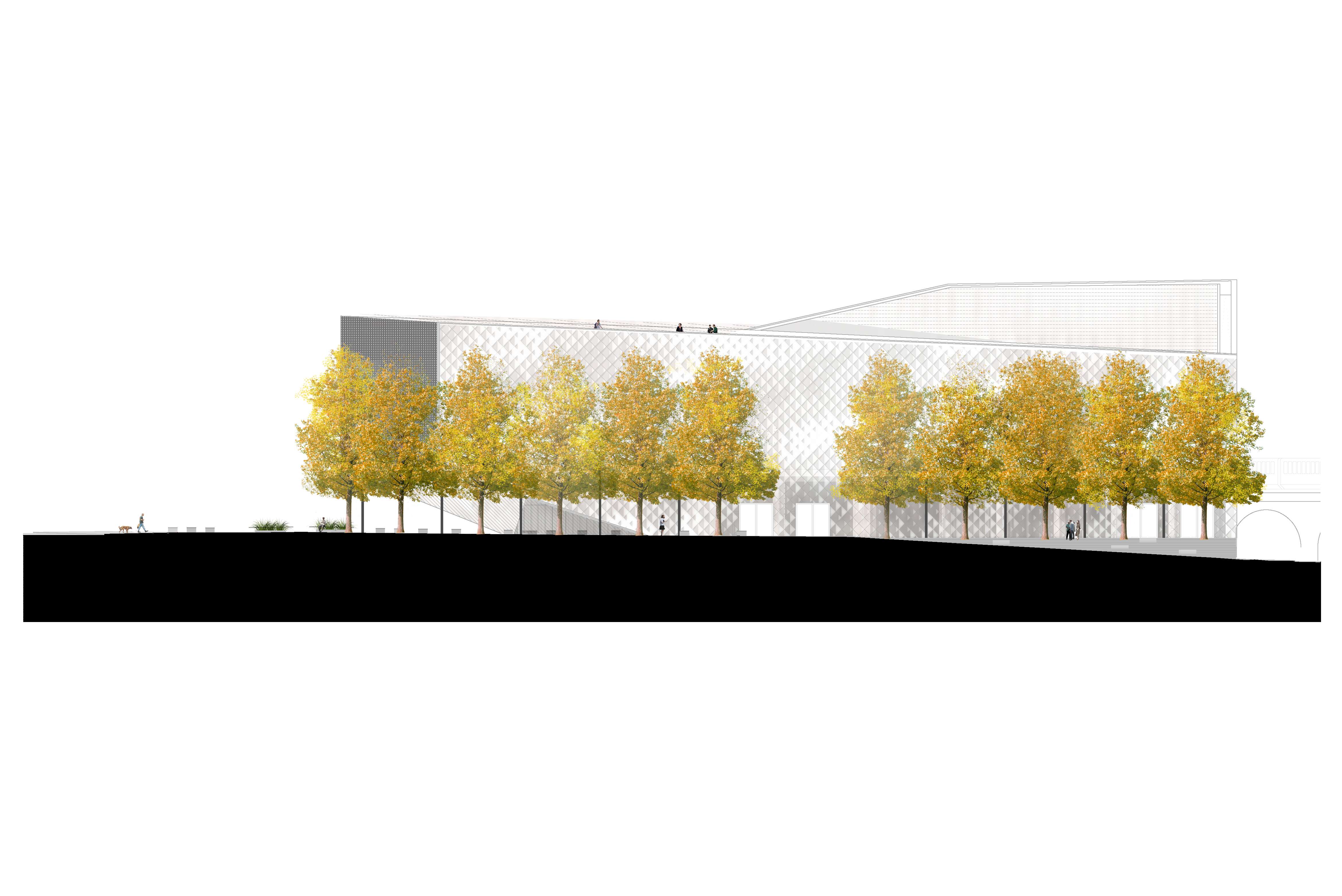 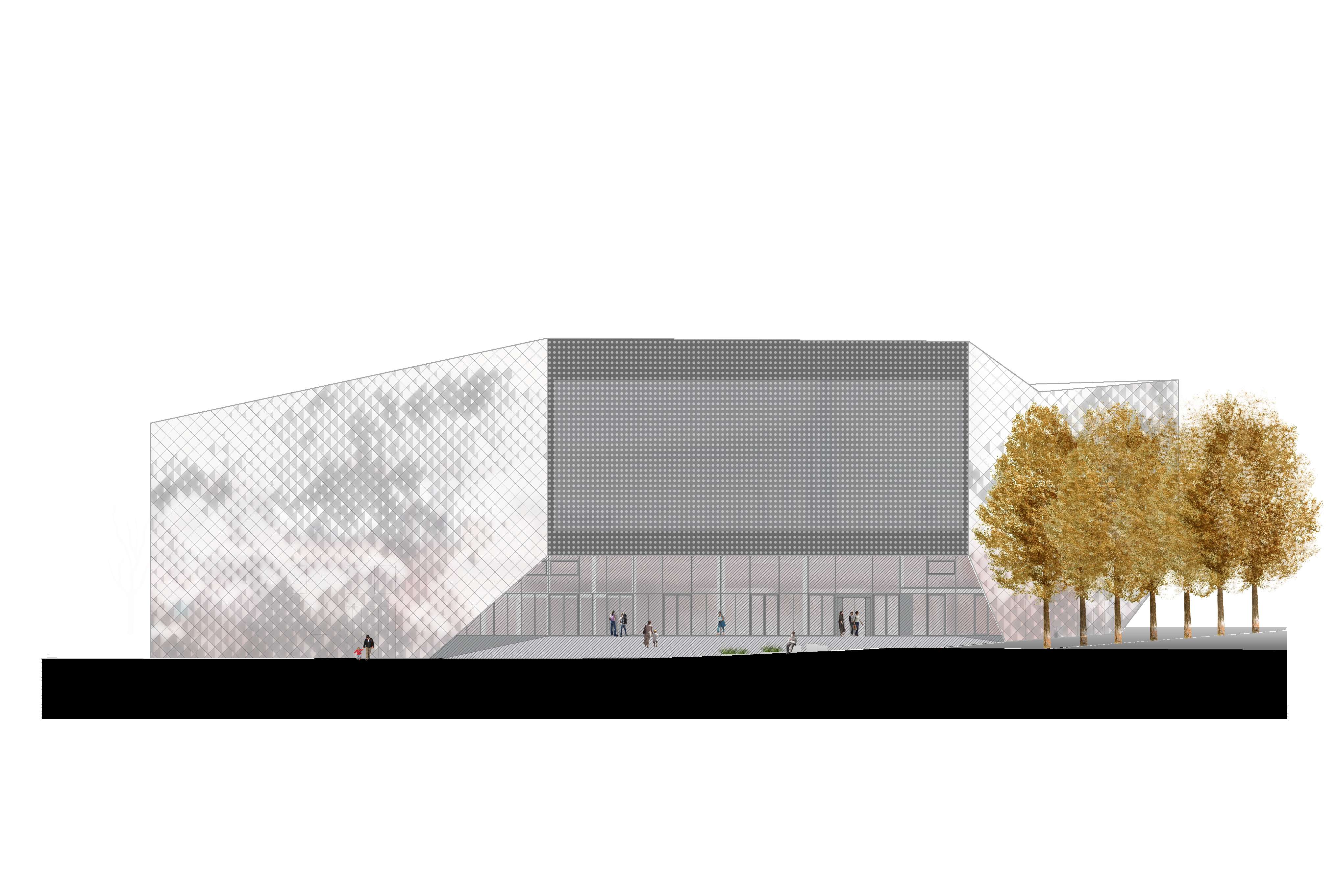 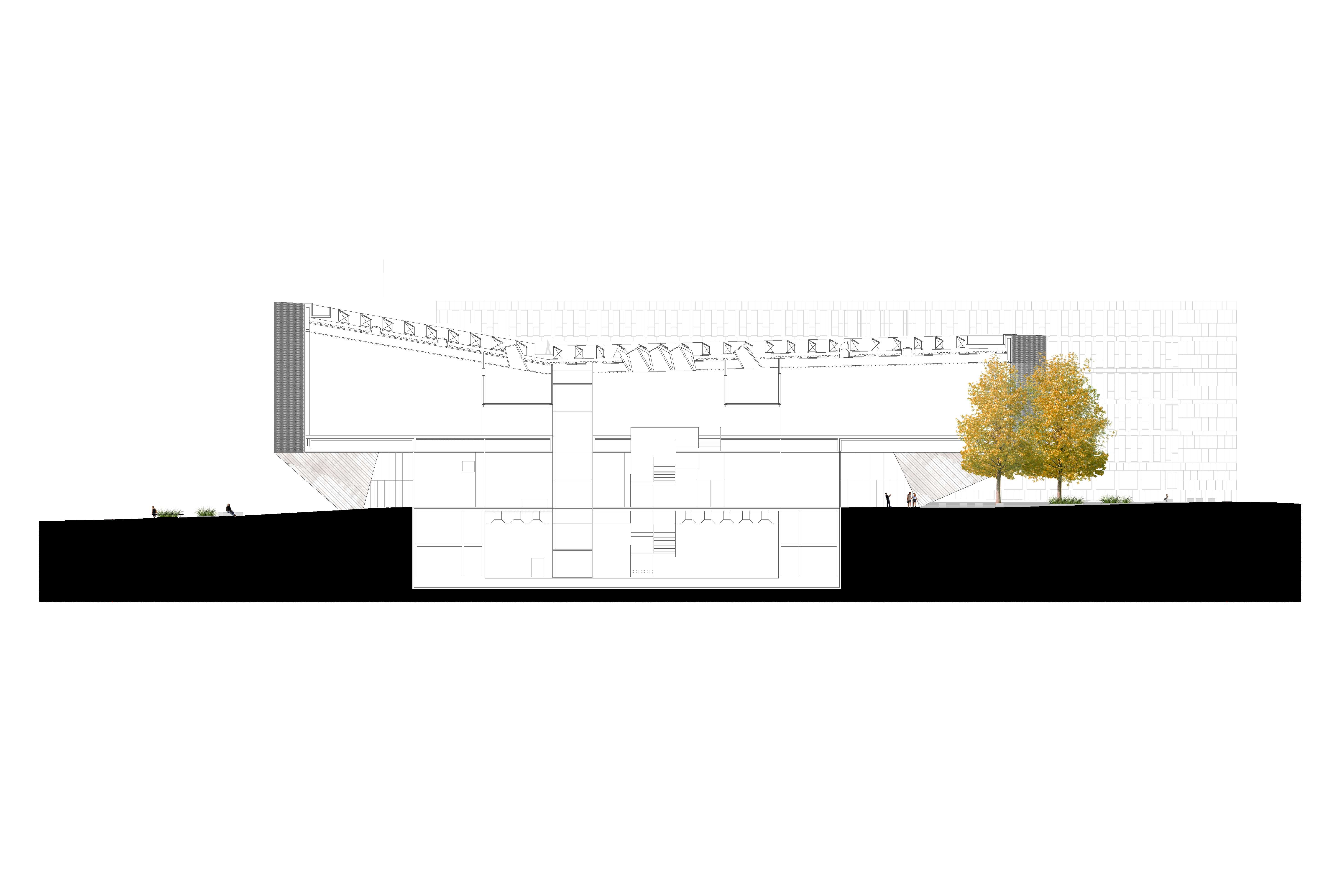 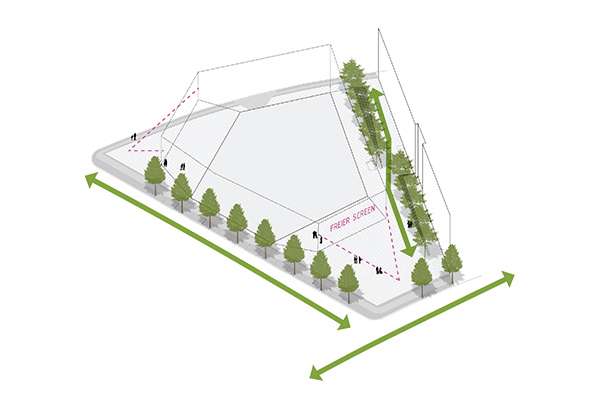 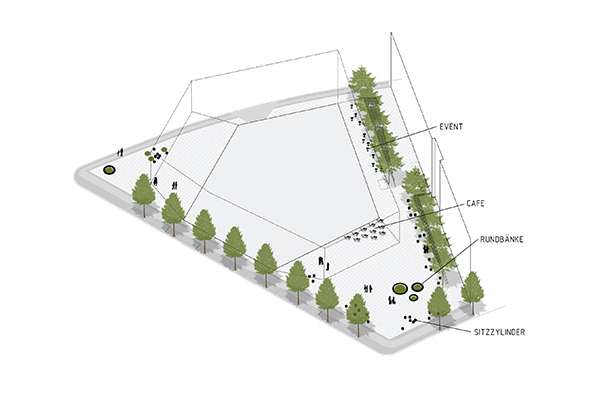 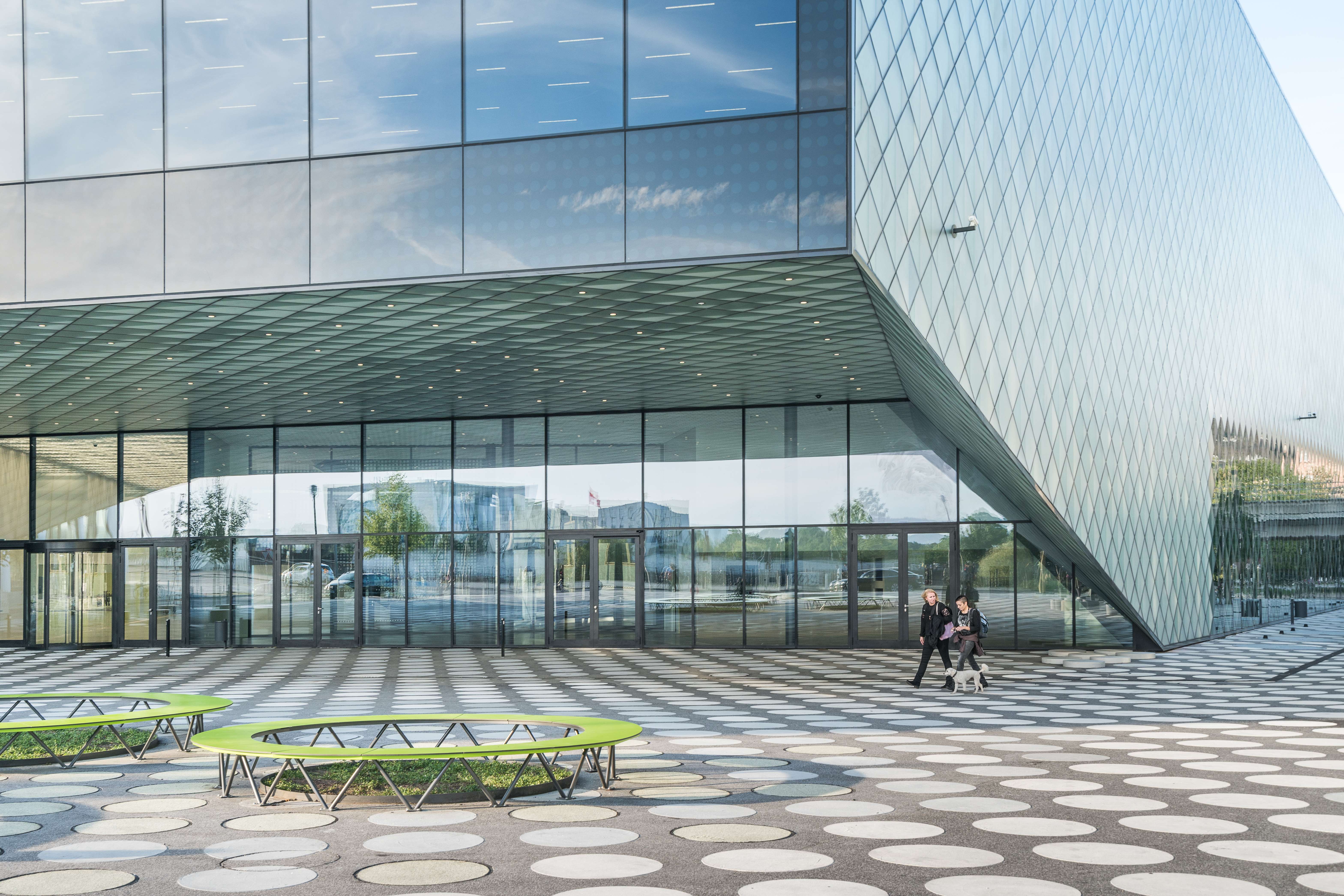 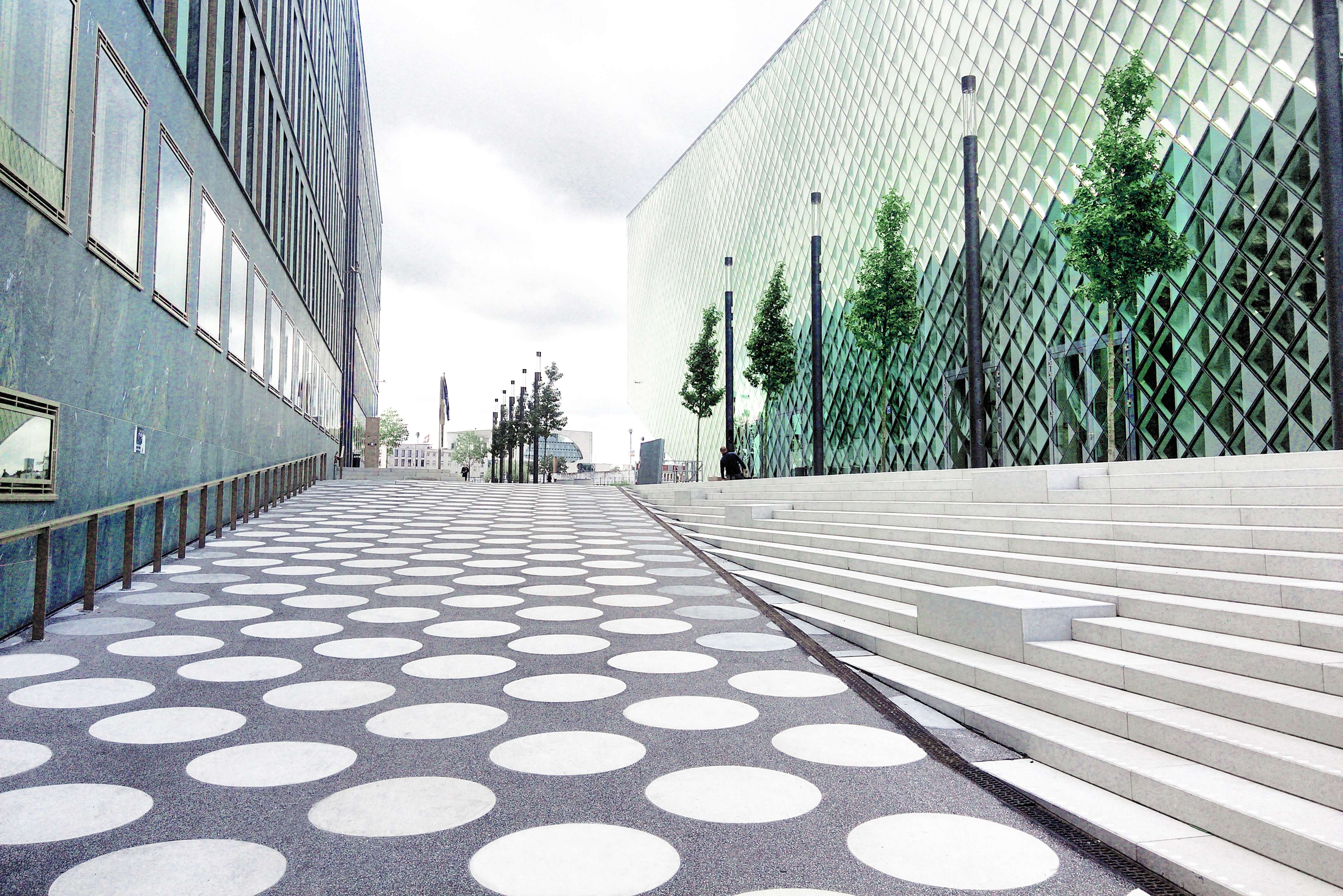 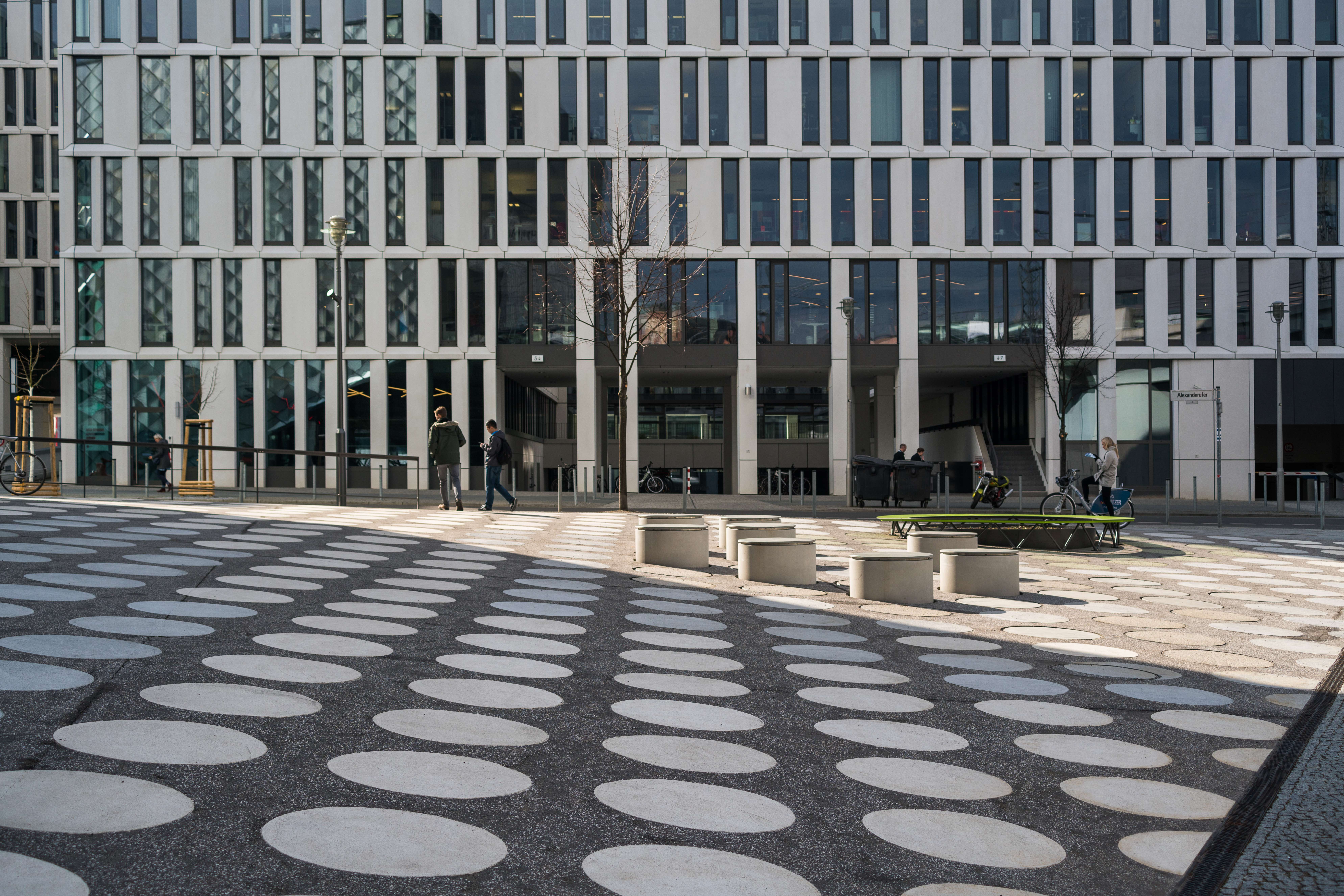 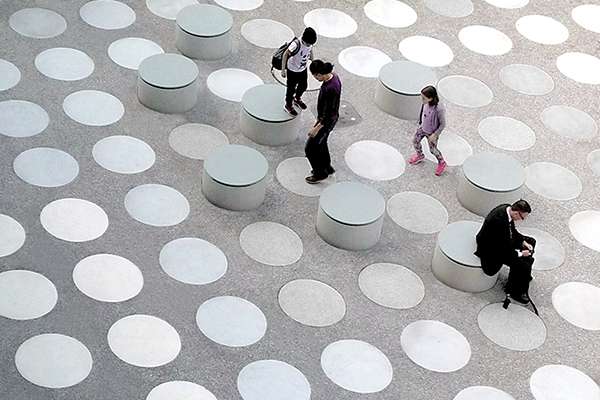 History of the site:
The site, which is bounded by the Bundesministerium für Bildung und Forschung (ministry for education and research), the Spreebogen (the bend in the river Spree), the Humboldthafen (Humboldt port), the main station and the Charité Hospital, has been deeply affected by the history of Berlin. During World War II, the area was massively destroyed. All buildings were bombed in the last days of the war. At the end of the conflict, when the allies divided Berlin into 4 sectors, the site was attached to the Soviet sector.
Until 1989 the site was an open field characterized by the wall separating West Berlin from Soviet East Berlin. It came to be known at the “death strip”, a wide area containing anti-vehicle trenches, "fakir beds" and other guard towers placed along the large concrete wall. Many people were shot and killed at this location while trying to swim across the river Spree to escape from the socialist German Democratic Republic. In 1990, after the demolition of the Berlin wall, the area became part of the urban development project for the new government district, but the connection to Berlin's city life was missing. The plot itself was an empty field, cut off between the river Spree, the elevated railway tracks and the adjacent office buildings still under construction. There was no sign of any public or inviting space for people to get together and meet.

Objective of the proposal:
In 2009 the authorities agreed to create a place of presentation and dialogue to unite and engage all the principal actors of this urban context: politics, science, commerce, arts and citizenship. The main idea was to generate a new center for “shaping the Future” in Berlin’s government district: an exhibition area with vivid scenarios, an interactive hands-on laboratory and a place of interaction. It would offer space for exciting discussions, creative workshops and visionary ideas. The aim was to give a chance to all those interested in the “Future” to take an active role in developing it.
Based on these goals, the Institute for Federal Real Estate ("BImA") launched a competition for the realization of a building of approximately 7000 m² of usable area and public spaces with high-quality design and functionality.

Description
The Futurium building asserts its sculptural identity in its urban context. On the Alexanderufer and the Kapelle-Ufer, the building is setback in order to generate new public spaces. It is also folded upwards to create urban high points, giving the Futurium a striking appearance between the Spree and the elevated railway.
The exterior space around the Futurium is organized into two large partially sheltered forecourts where the main entrances are located, and a passageway that connects the Charité campus to the riverbank.
In order to unify the exterior spaces, the entire ground surface is coated with seamless asphalt, and articulated with a pattern of dots that give the project its character. The majority of the dots are made of a paint product usually used for road signage, applied in different grey tones, which give the surface a cloudy appeal.
Another part of the pattern is composed of several inlaid circles of prefabricated concrete and EPDM granules which form clusters within the pattern: light-reflecting and hydrophobic concrete, photo- engraved concrete and soft EPDM granules add a layer of aesthetic and haptic experience to the squares., A tactile floor marking system is also integrated in the overall scheme to lead disabled people across the site.
Seating options, path and rest areas are playfully arranged within the pattern. Bright green colored circular benches with plants at their center create a central meeting point in the square.  An event area terrace is located in the shade of lines of trees along the passageway to the Charité.

Evaluation
The Kapelle-Ufer now has a social space. The playfulness and bright colors of the patterns in the square highlight it as a forecourt to the building and a venue for concerts and festivities, but also invite the passers-by to interact with the site.
The public space surrounding the Futurium has become a perfect setting for Berlin´s everyday urban life: People play, pose, skate, cycle, sit, take photos, and dance. The different shapes used throughout the entire complex (dots for the exterior space, squares for the facade) provide a memorable background for photos. Tourists and locals stop at the site after a long bicycle ride along the Berlin wall trail.
The site has also become a desirable location for hosting concerts and dance performances, thanks to the width of the space and robustness of the material.
The city of Berlin can now benefit from a new creative and stimulating spot for recreational activities and engaging in the development of our Future. The project adds a new pulsing center to the city’s urban fabric, in the hope to overcome the negativities of the past and create a new place that brings people together.