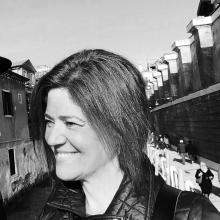 Luby Springall is a licensed architect by the Ibero-American University in Mexico and an artist with postgraduate studies by the Royal College of Art in London.

She begins teaching Architecture in 1987 as part of the Ibero-American University’s project cycle. From 2007 to 2011, she coordinated a vertical project in this cycle. From 1990 to 2004, she was Partner at Springall + Lira. In 1998, she is awarded the Silver Medal at the 5th Mexican Architecture Biennial for the CIDE building (Center for Research and Teaching in Economics) in Mexico City. That same year, she was finalist at the 2nd Ibero-American Biennial of Architecture in Spain and was awarded an Honorable Mention at the 11th Quito Architecture Biennial. She is a founder and director of ELARQA MX, an architecture magazine and publishing house, as well as a founder of Gaeta-Springall Architects (2004).

As an artist, she has shown her work in many exhibitions in Mexico, Canada and the United Kingdom. In 2003, she was awarded a FONCA-CONACULTA artistic residence at the Banff Center for the Arts in Canada.