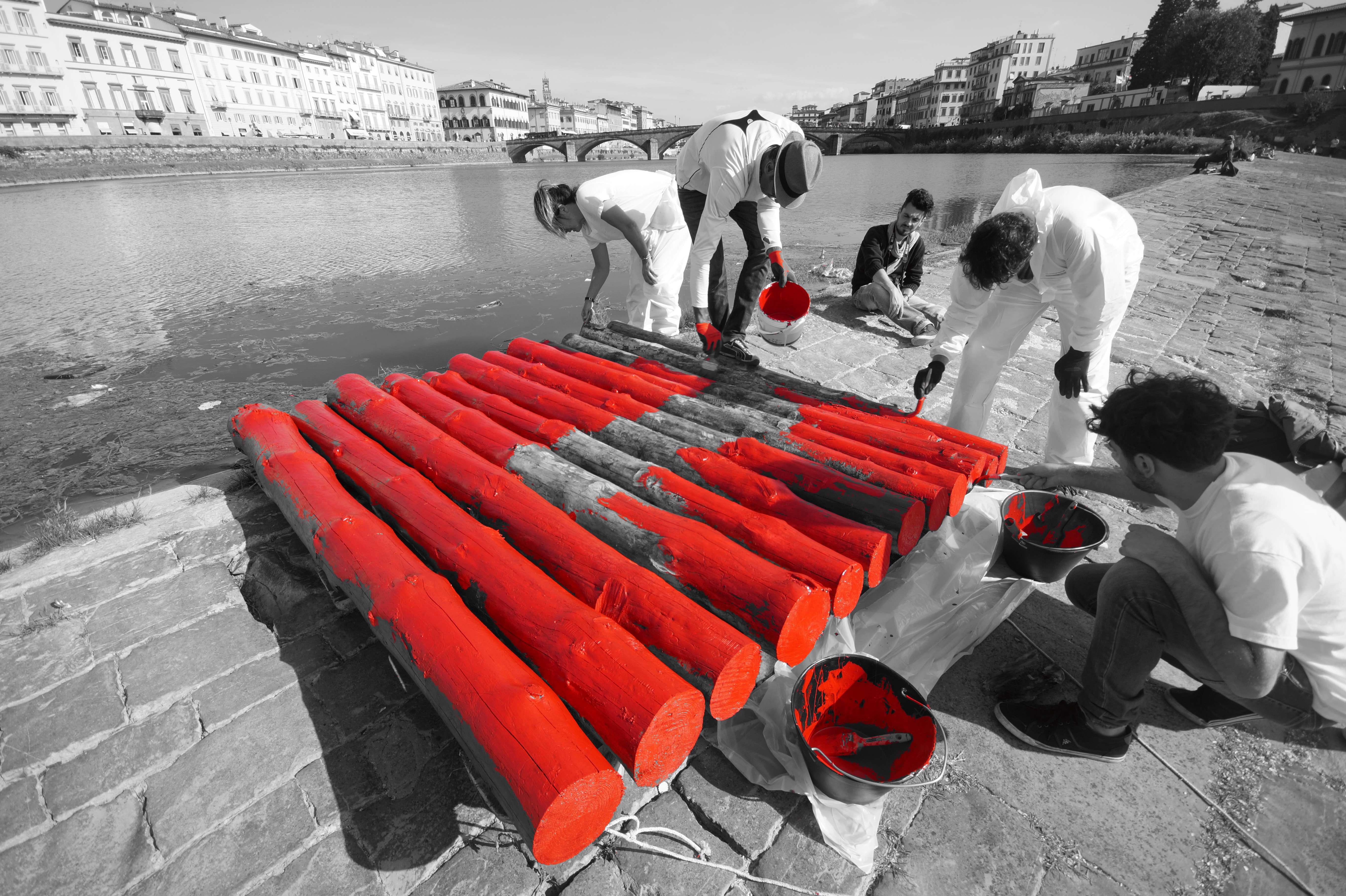 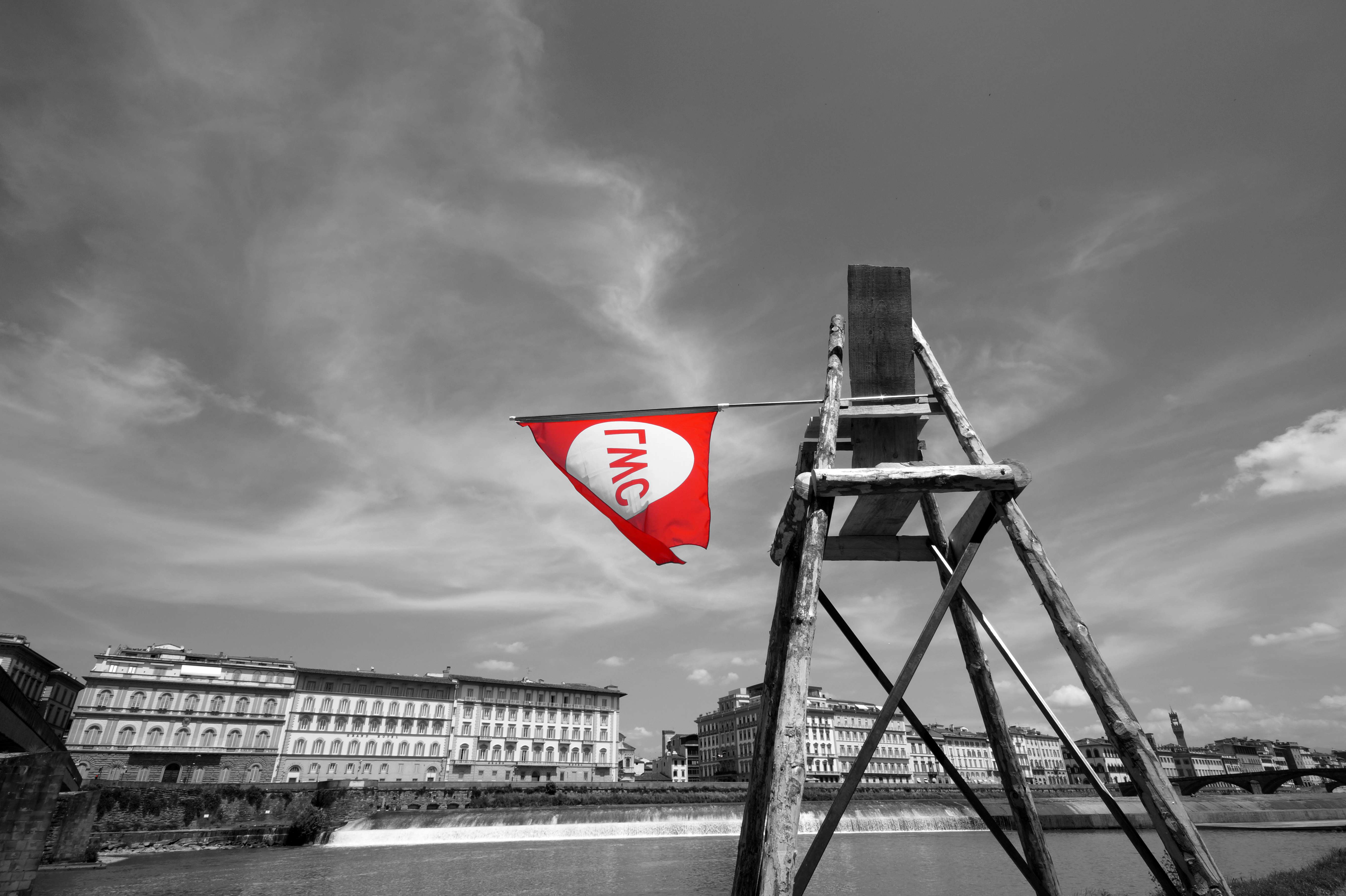 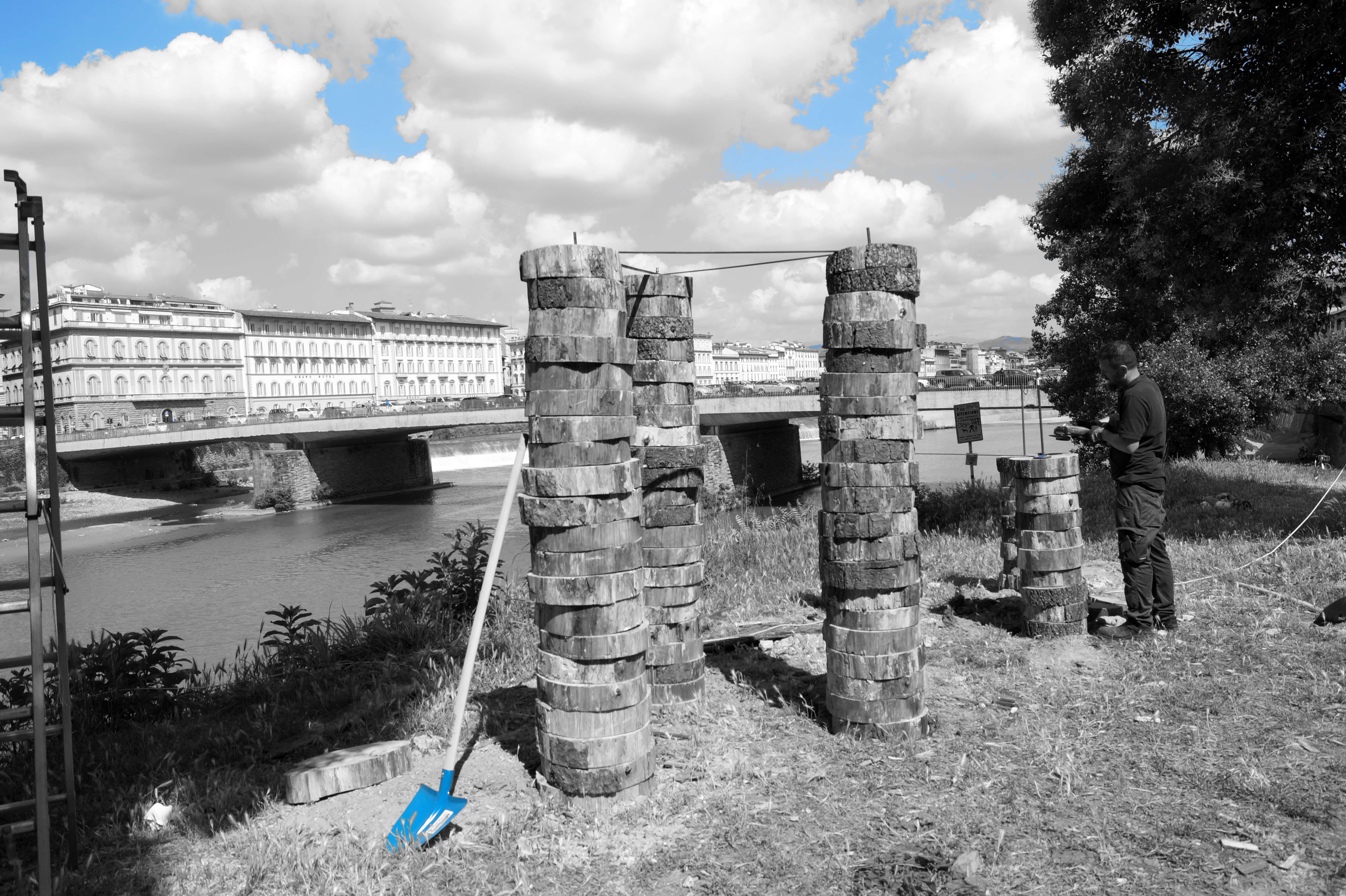 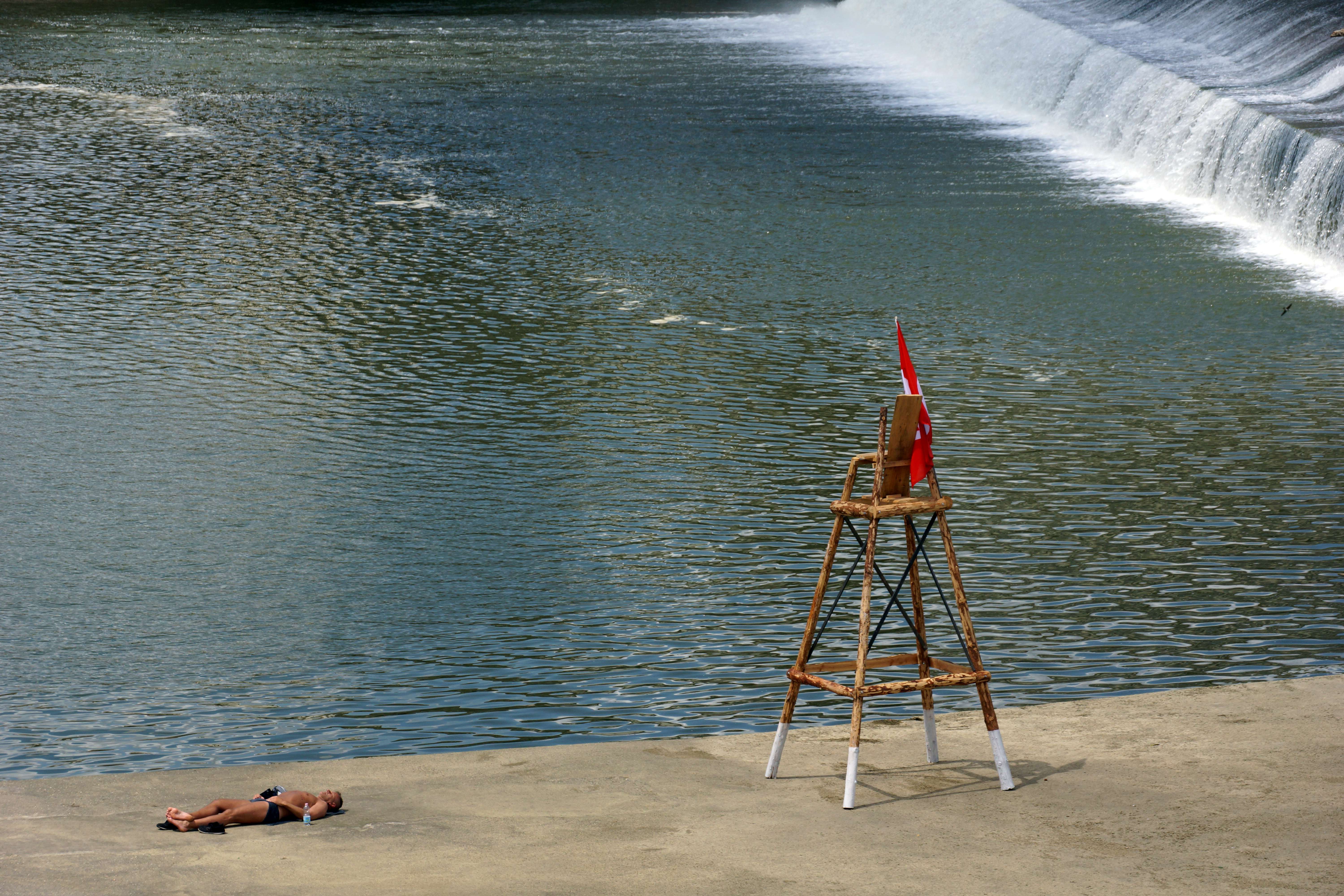 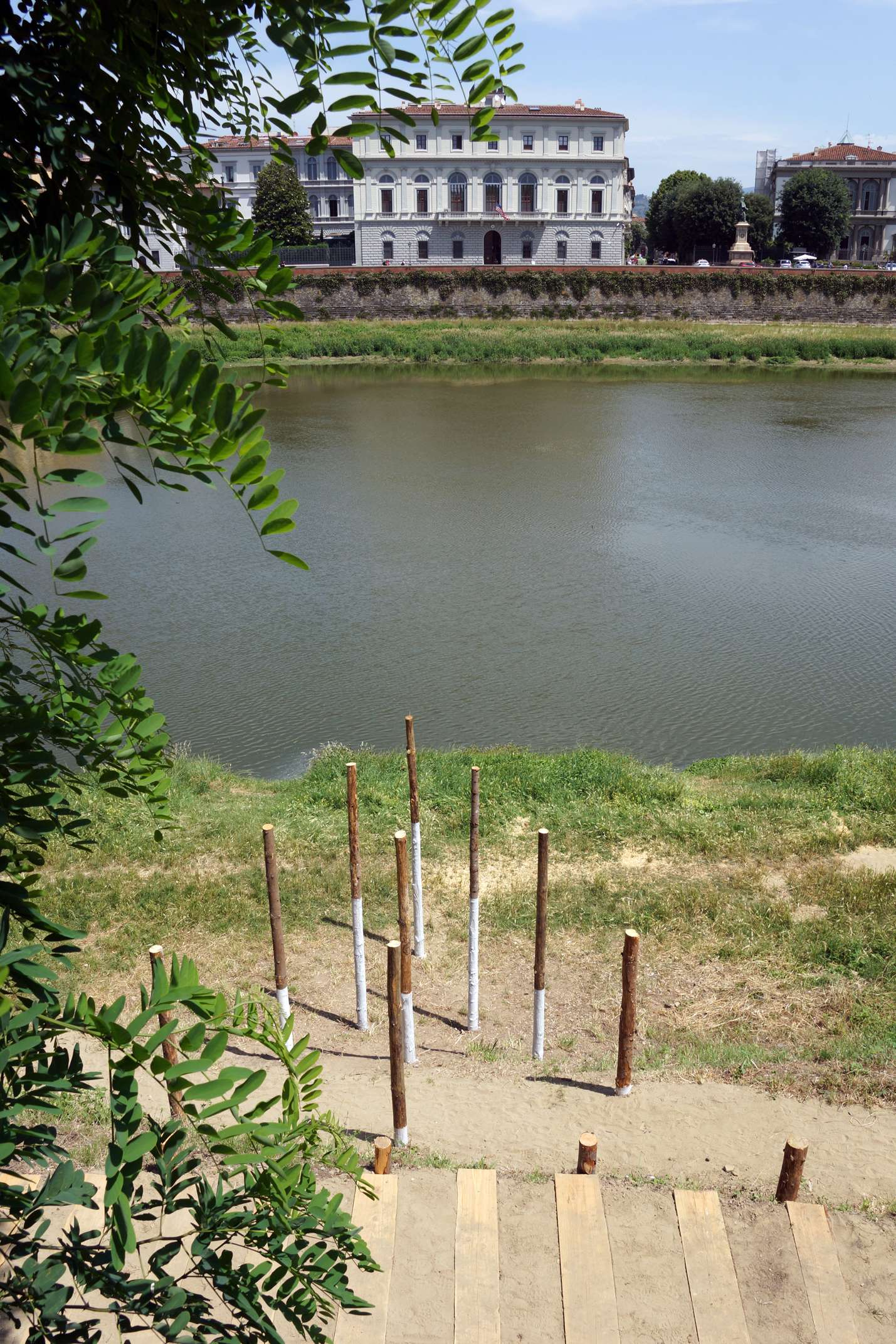 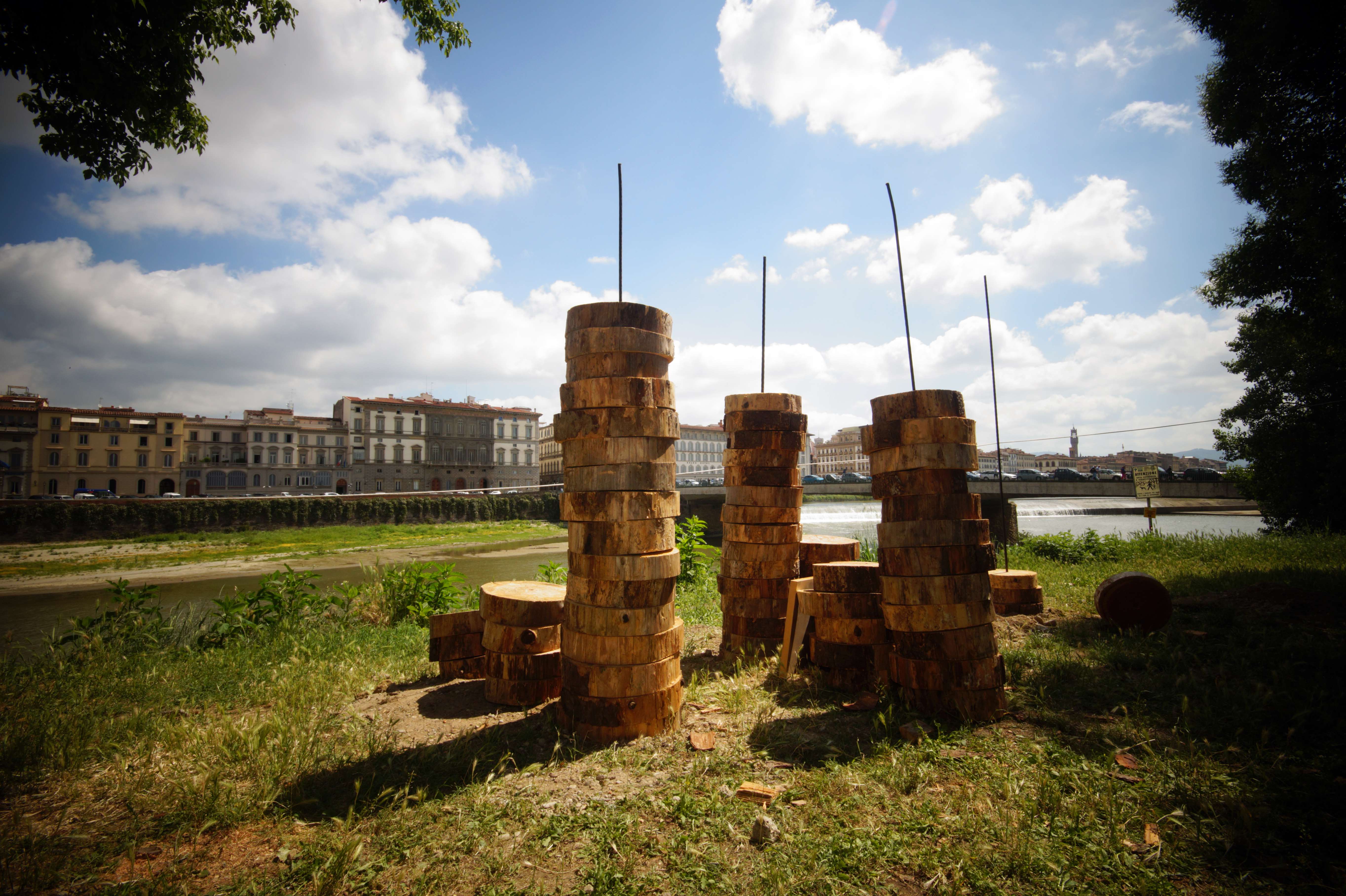 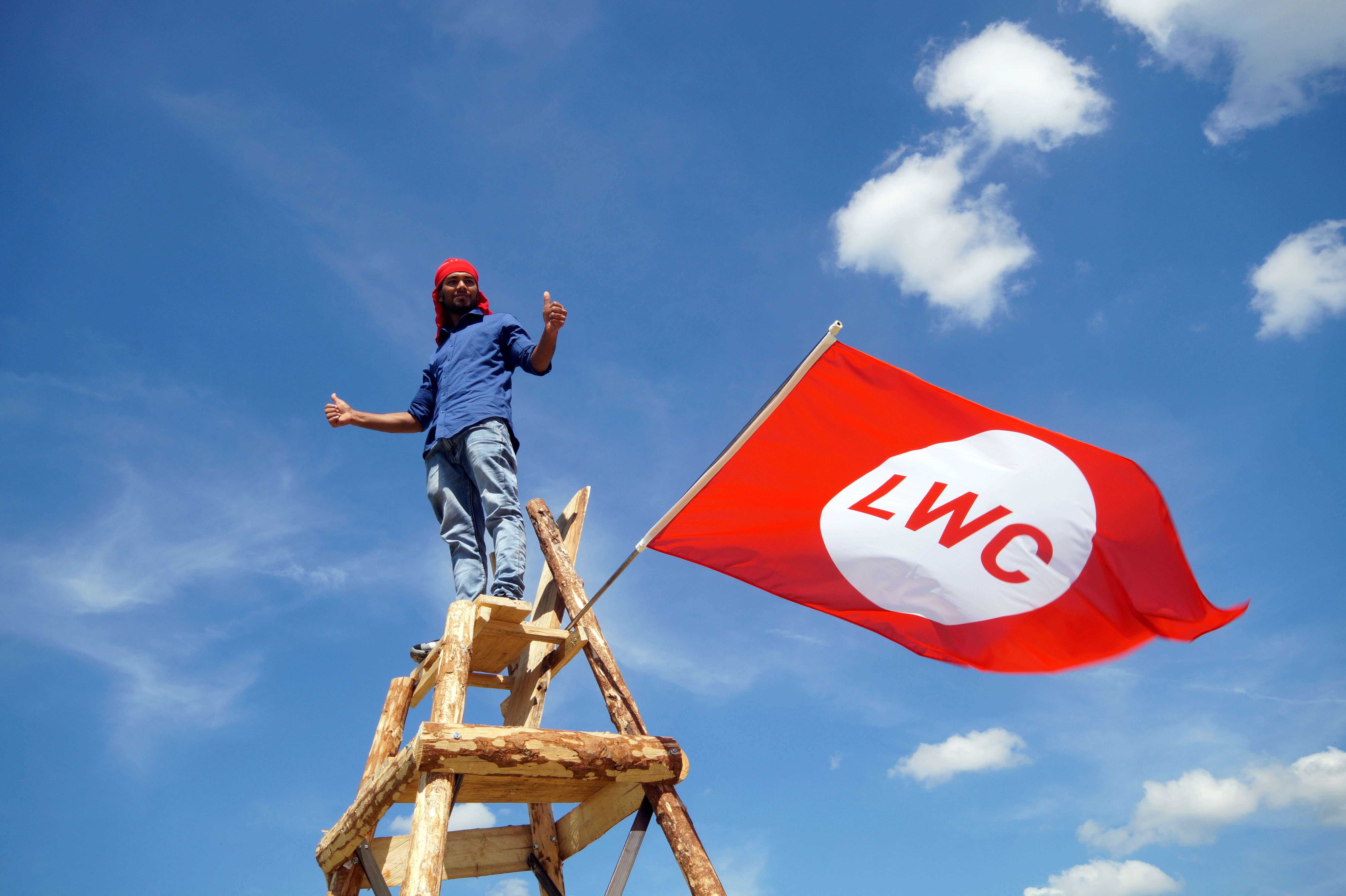 The first two editions of the Shared-Operative Workshops called LWCircus-ArnoLabs have been held in Florence, from 21st till 30th of September 2017 and from 23rd May till 3rd June 2018, creating ephemeral installations such as light urban furniture, staging points and temporary shelters. These all realized on site by the revisitation and assembling of recycled natural material transported by the changing Arno River’s moods.

During both the Florentine editions, a temporary international, multi cultural and multidisciplinary creative community fruitfully tested on the field shared practices by using multimedia languages, artistic approaches and performative-spontaneous attitudes in the specific urban context, with the direct involvement of local actors and public institutions responsible for the River's management and safeguard, looking for a RESILIENT and INCLUSIVE urban future, in terms of responsible cultural valorization and sustainable development for the local community and the diverse minorities directly involved in each step of the operative shared process.

The Shared Process among Arno river banks gave life to a series of ephemeral installations and performances realized by recycling of natural elements collected on site coming from the natural Resource and the skills and attitudes of the participants to the Activity.

For both the editions, groups of selected young refugees, coming form Niger, Senegal, Mali (ArnoLab017), Burkina Faso, Ghana, Gambia and Bangladesh (ArnoLab018), survived crossing of Mediterranean, coming from Libya and temporary hosted in the Florentine context, were invited to join the rest of international creative group (coming from Mexico, China, USA, Australia, Lebanon and Syria, Colombia, Venezuela UK, Holland, France, and Italy). Everyone worked extremely enthusiastically designing and realizing the series of installations, sharing wishes and hopes with the rest of international participants and the locals, becoming temporarily part of the local community and starting a process of social inclusion that gave life to successive opportunities for further inclusion in local realities.

The locals, sharing the process in conceiving and realizing the works, started by look at the others in a different way, transmuting the concept of ‘others’ into a feeling of ‘us’. The outcome resulted in a re-appropriation of the traditional way of living along the Riverbanks, through a plausible common space, where, through interaction, different members of the community, took ownership of the management of the reconquered public space without any kind of discrimination, rediscovering the mutable open space as medium of cohesion between the Community and the involved minorities.

The focus of the experimentation within the LWCircus Program is to link the actors, for various reasons, to managing the landscape component of contemporary urban contexts, through shared creative workshops, such as the ArnoLabs of Florence or the MayaLabs of Merida, in Yucatan, intense experiences where the different fields of belonging of the protagonists are disparate and the multidisciplinary and multicultural component is fundamental, for the empirical experimentation on the field and the subsequent phase of observation and evaluation of the results: as possibility of production of symbolic space through occasions of ephemeral expressions, which contribute to generate spaces of knowledge and relationship, fundamental characteristics of the city's project.

We believe our results indicate that there is a huge amount of potential around the evolution of the traditional figure of the landscape architect to a sort of “landscape facilitator" as well as to the Landscape Architecture Discipline, underling the operative shared method as fundamental and intrinsic part of the design process in itself. Making others as thought they are a fundamental part to achieve the result, it resulted in a successful strategy that helped in achieving great results in really short time.

In the year 2016, in direct response to the clear need for more shared urban practices of ephemeral expression, we established the LandWorks Circus International Program (www.lwcircus.org), a program with a main research intention to engage with the project of the city while also aiming to push the boundaries of Landscape Architecture into the realms of cultural landscapes in both urban and rural contexts.

Based on a narrative of a sort of renaissance within the urban landscape, LWCircus’ research centers around the engagement programs of the ArnoLabs Shared Creative Workshops. In particular, we looked at experimentation through artistic and multimedia languages, which through the medium of art in the landscape, can give back meaning to places and reconstruct ways of living in and enhancing the landscape, something that emerges typically when communities actively contributed to the construction of their cities.

This is the direction that LWCircus’s largely takes. Our work is deliberately based on a necessarily participatory formula, which enables local communities to work cooperatively in urban landscapes and prestigious environments and to share and build places of exchange and interaction. This is a process that moves disperate communities towards social inclusion, giving rise to ephemeral installations between art and landscape, perhaps what we can define as a sort of Urban Land Art.
The protagonists in this project are the places and people who interact with it in various ways. Local communities, minorities of various typologies, including political refugees and asylum seekers, administrators who are solicited by a multidisciplinary and International Creative Community, through the use of artistic and multimedia languages, to revisit the historical memory of the places concerned, towards a plausible future which is increasingly resilient and inclusive.

Focused on experimental methods and strategies of design based largely on social and cultural practices on the field, the LWCircus Program aims to enhance sensitive areas around cultural heritages and redesign contemporary urban landscapes under environmental, social and economic transition.

LWCircus looks for alternative tools and devices to activate sustainable development and responsible action through operative shared workshops, the direct involvement of local communities, minorities as well as well known international practitioners. The workshops stimulate the interdisciplinary exchange of knowledge, information, attitudes, skills and real-world know-how through artistic expression and multiple forms of media. LWCircus Program’s outcomes aim to an integration, a cultural and economic development for local inhabitants and minorities feel welcome and involved.