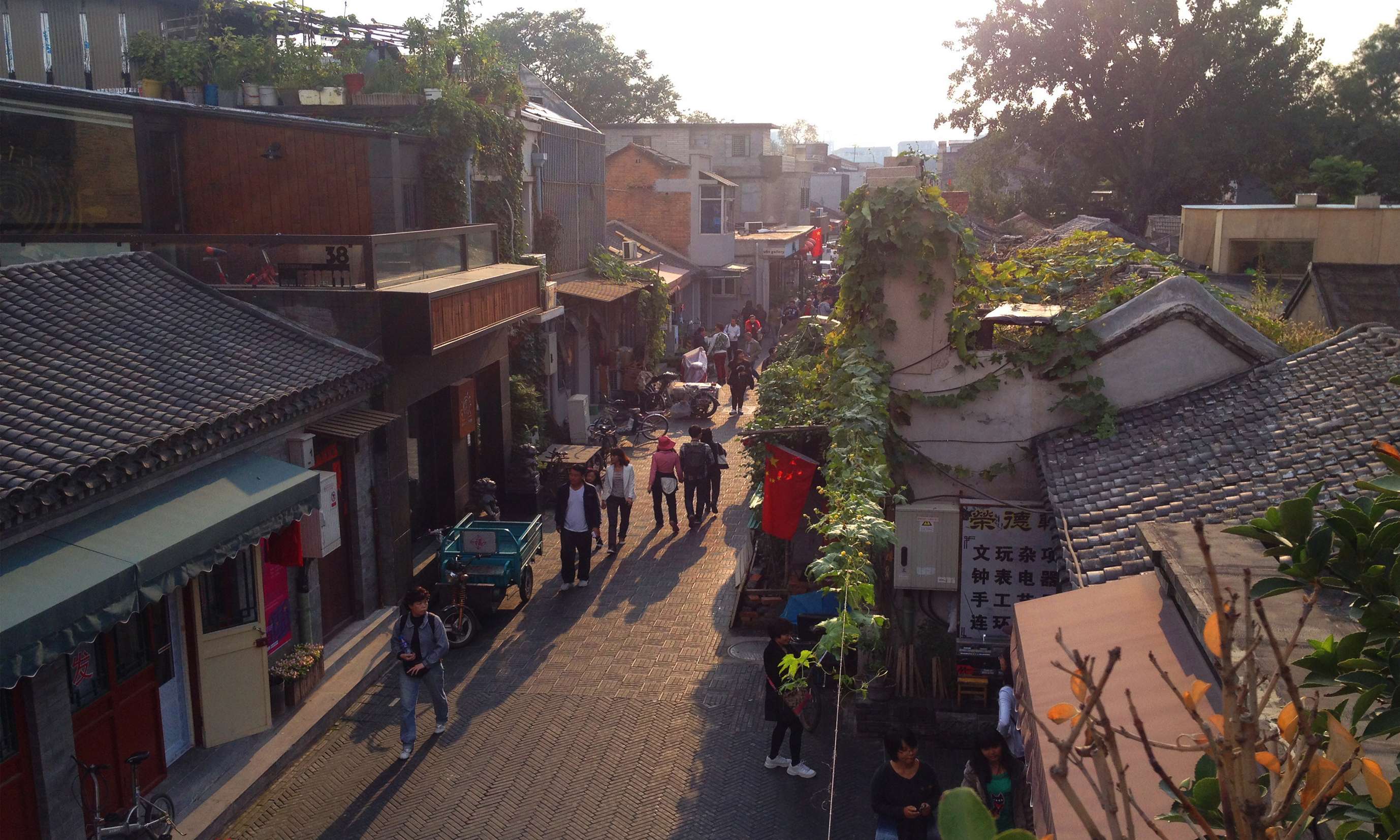 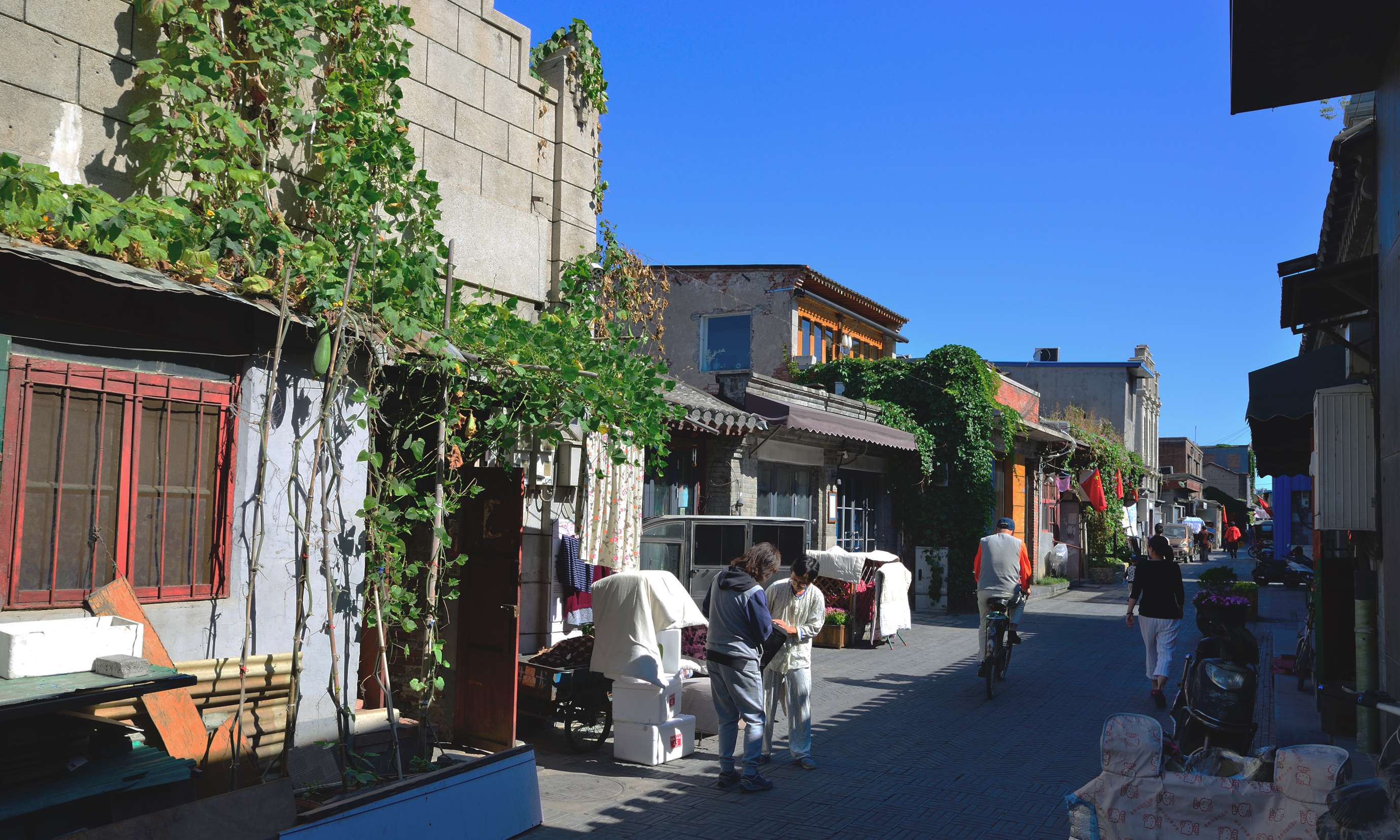 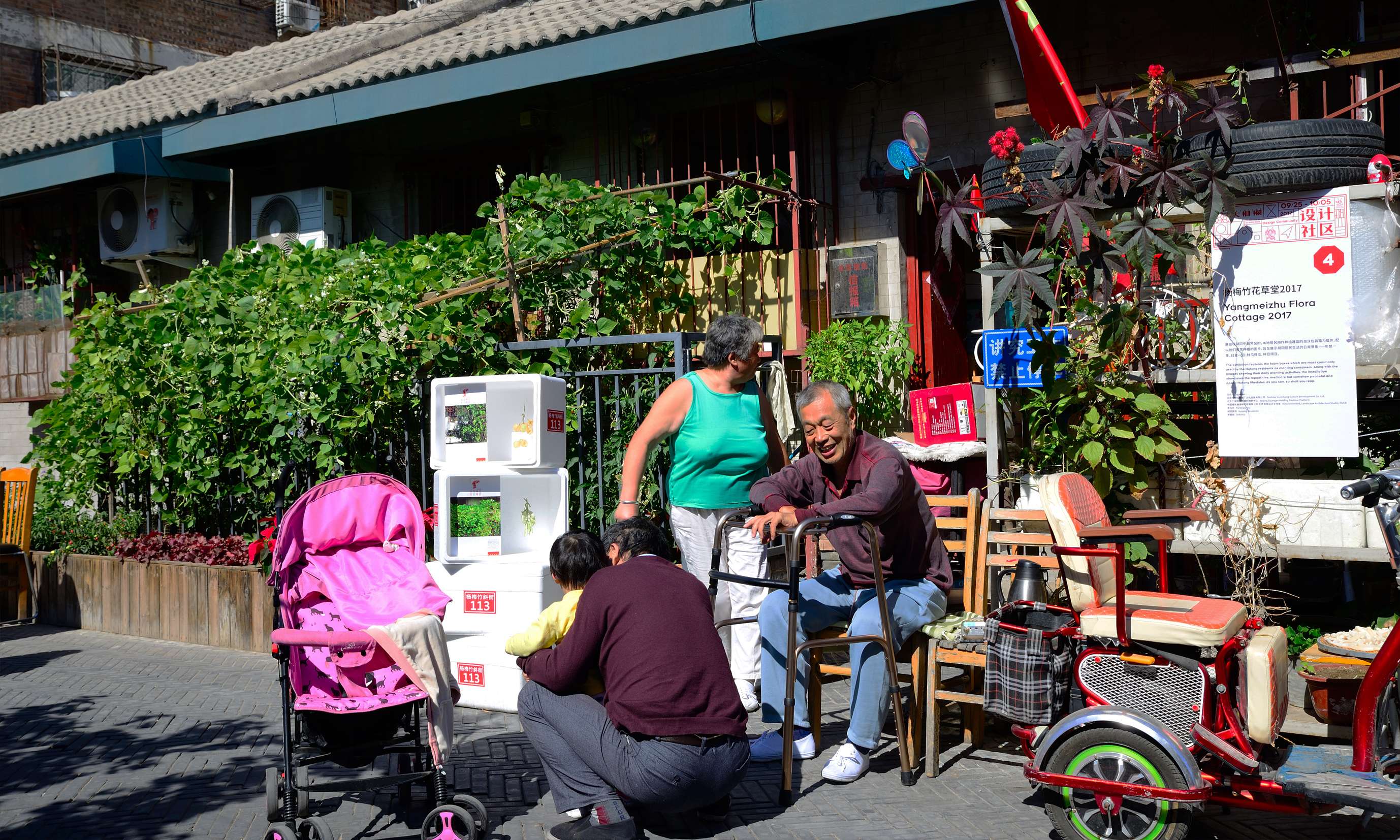 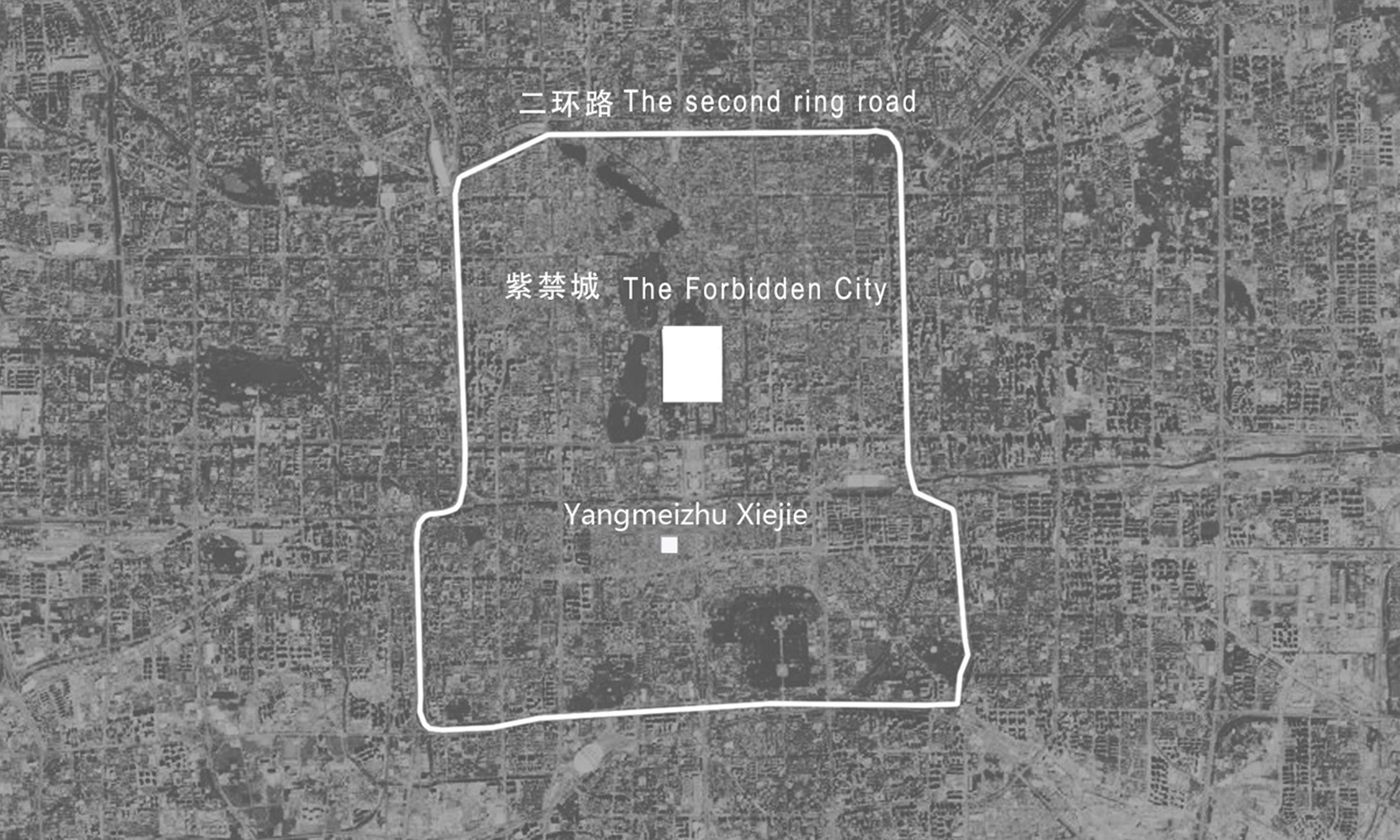 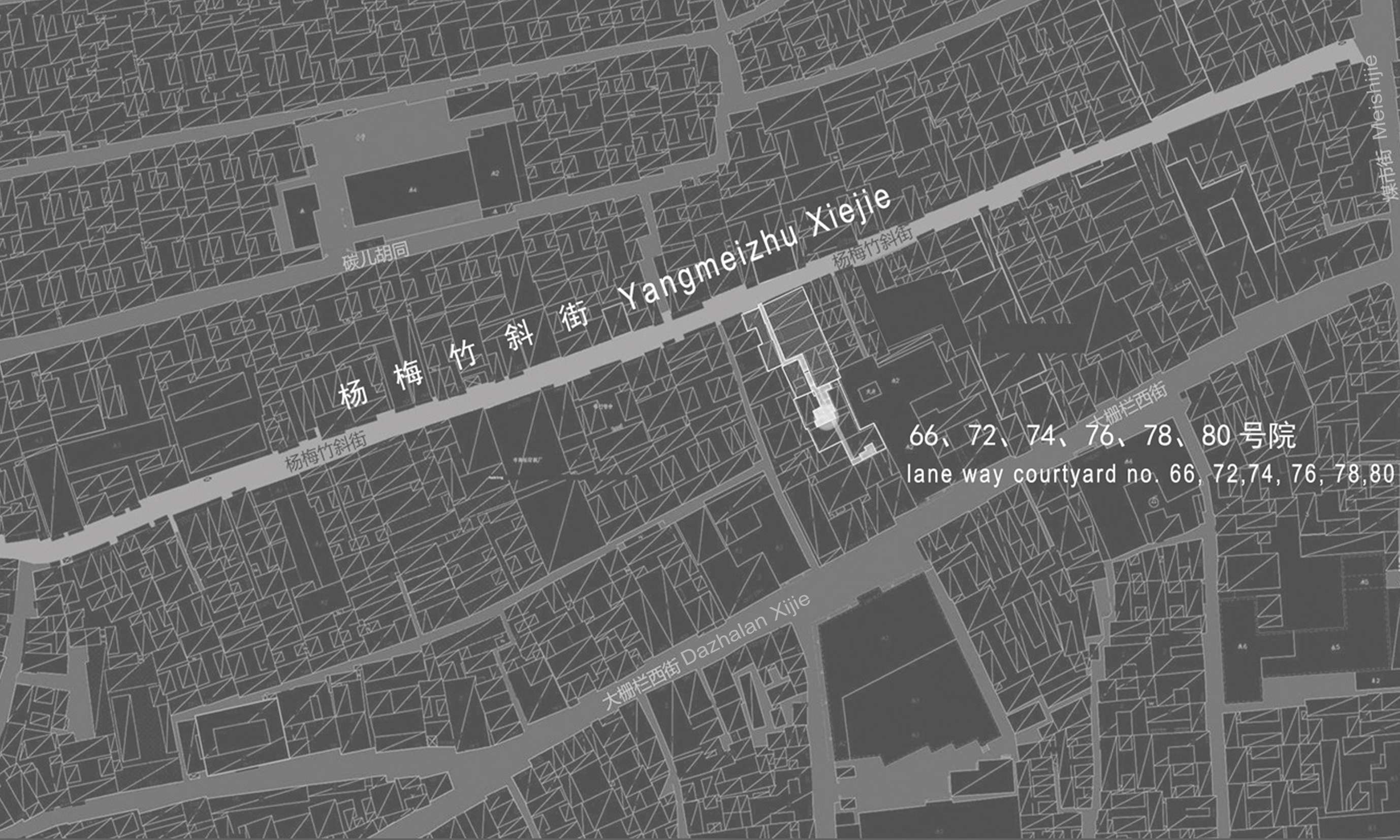 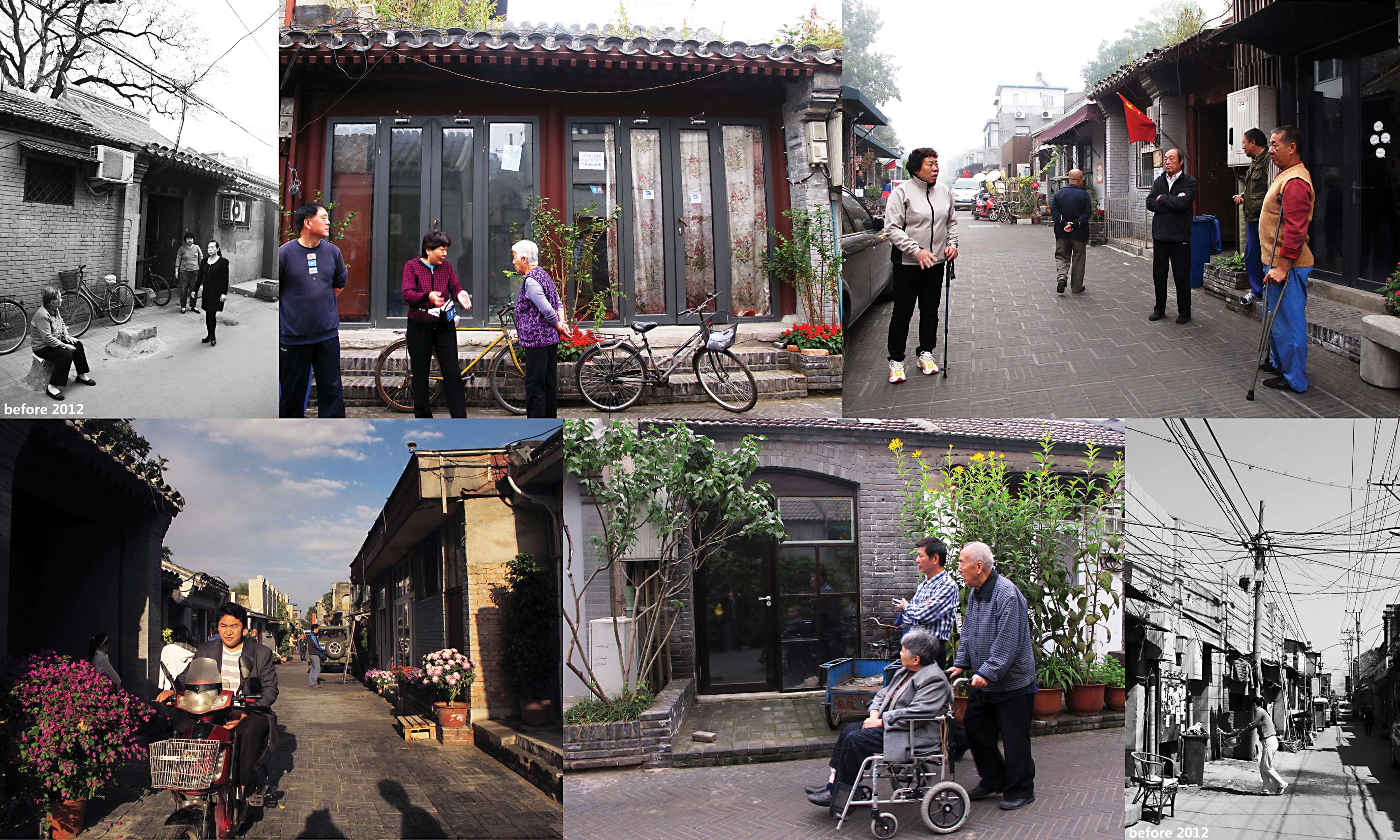 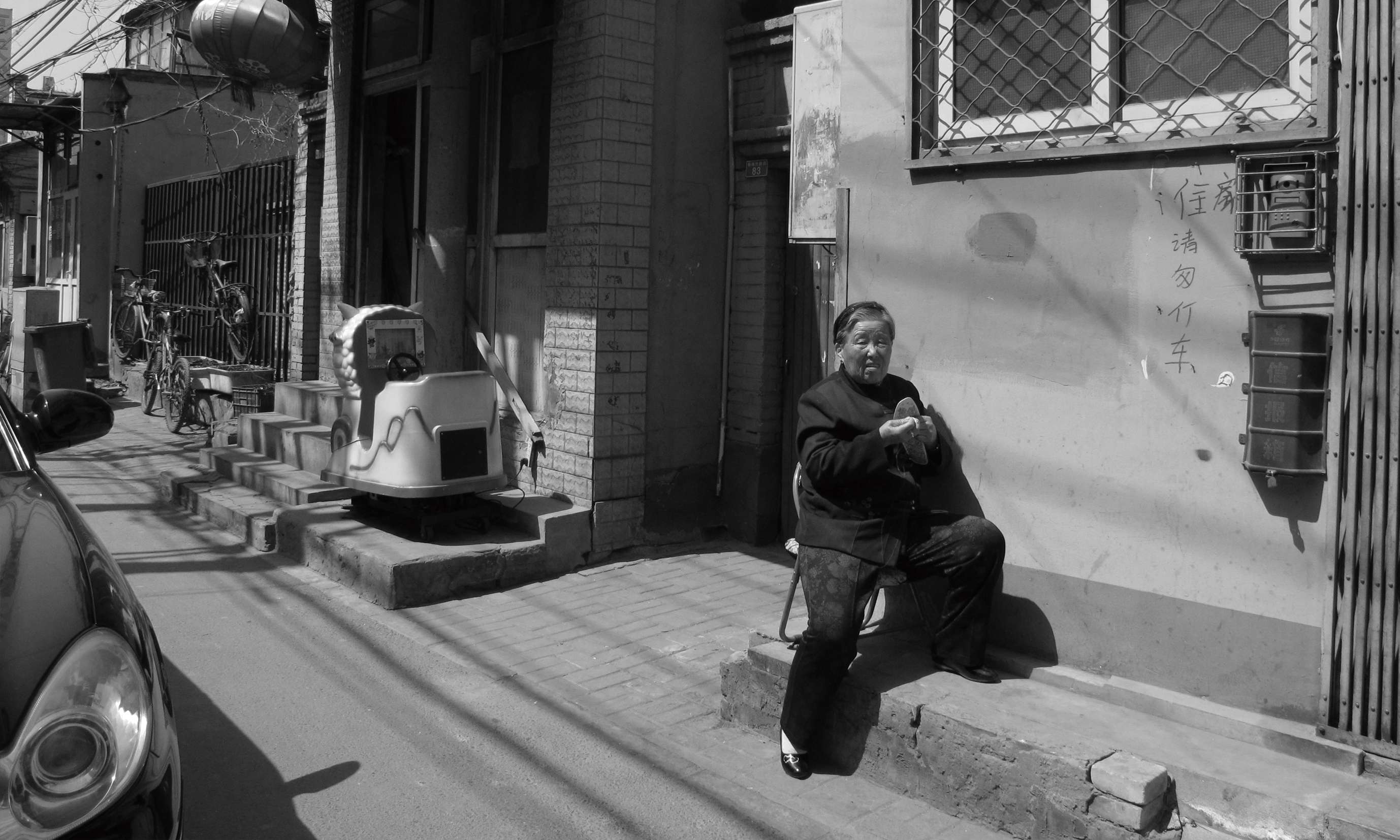 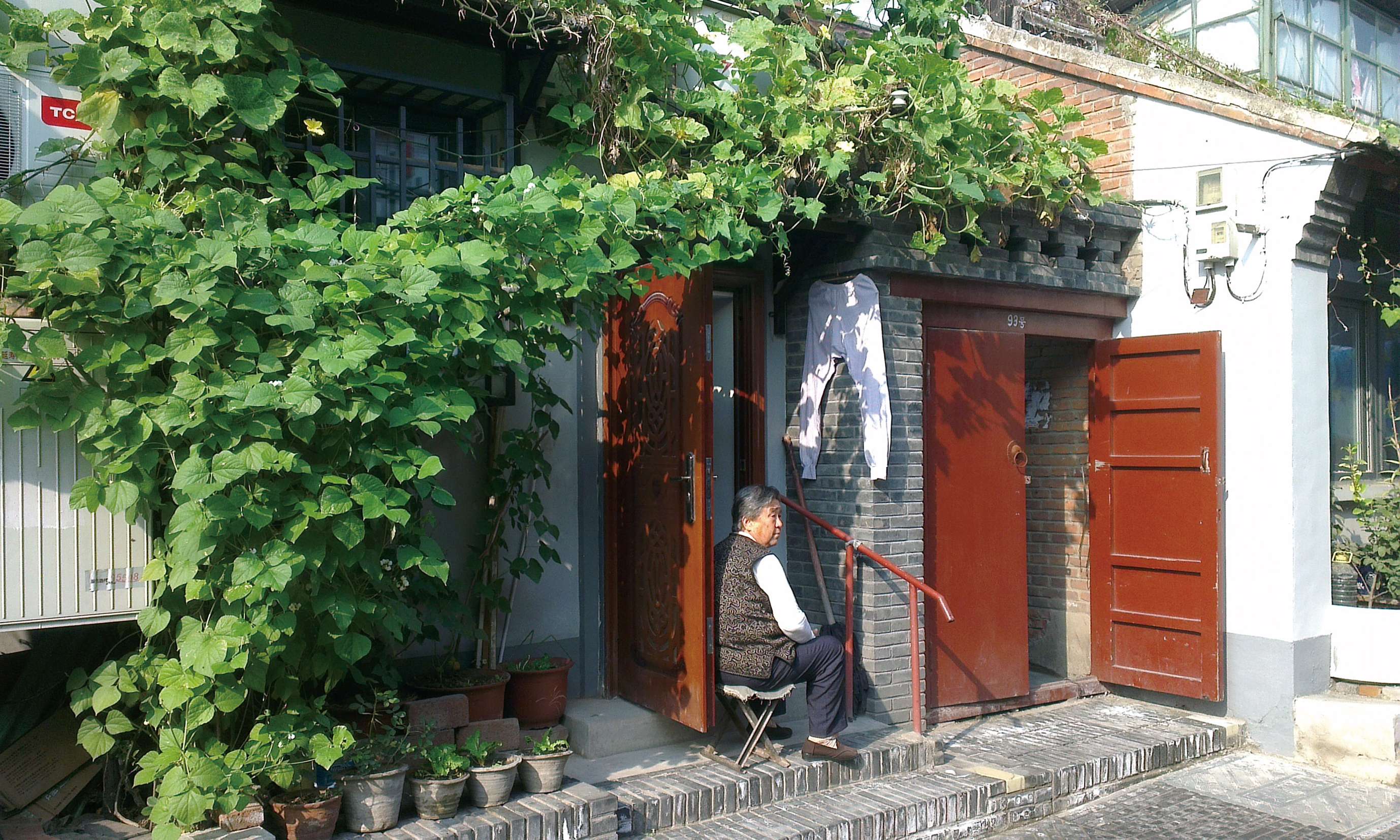 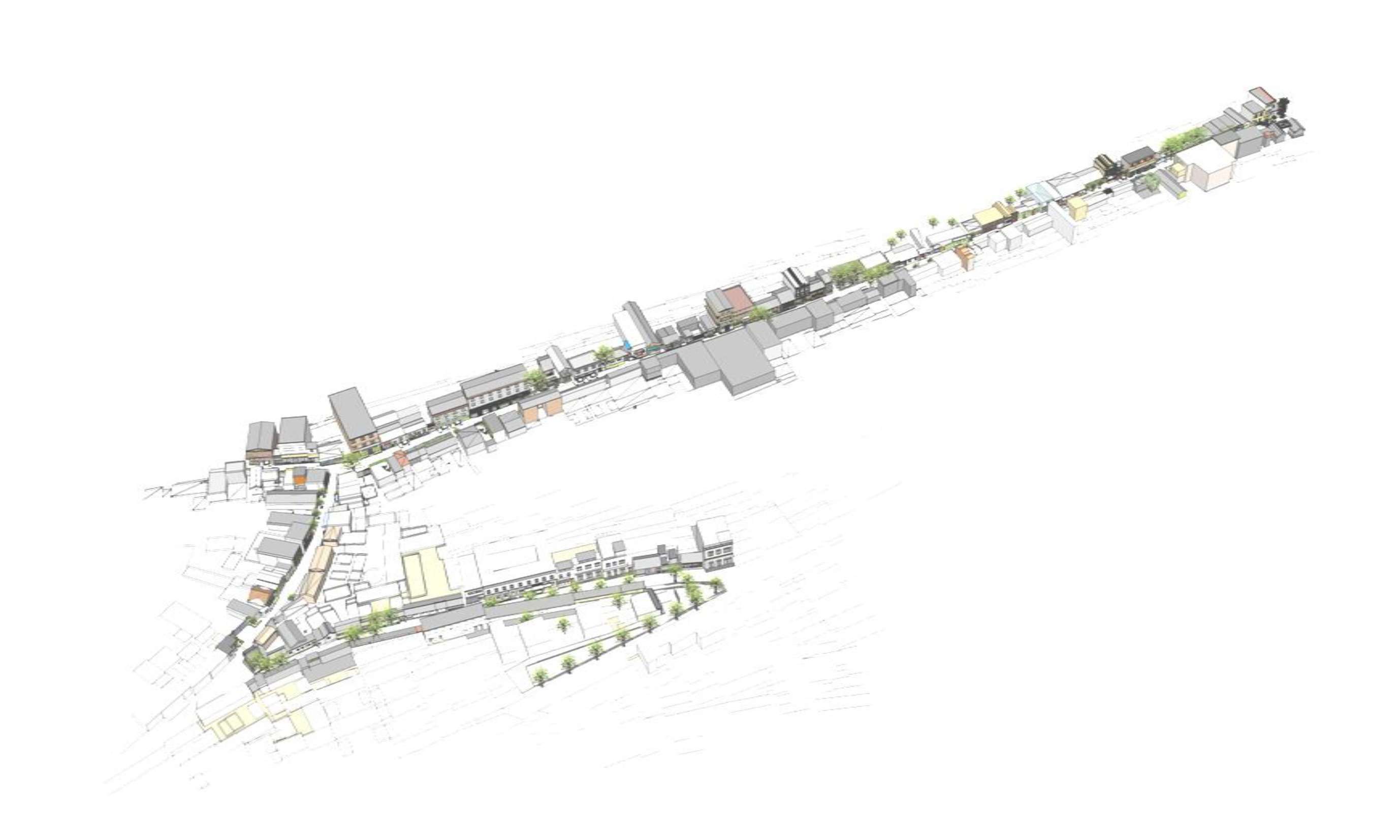 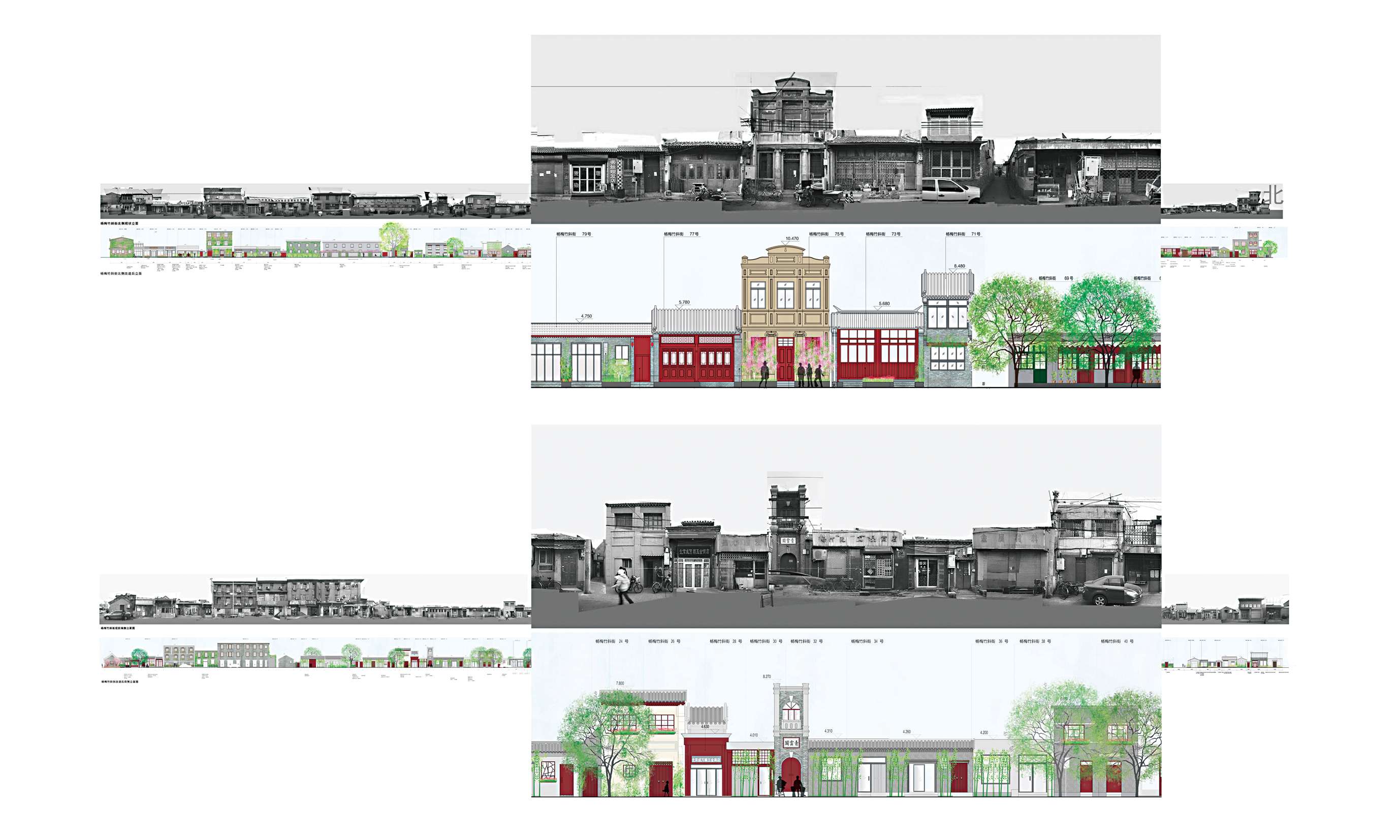 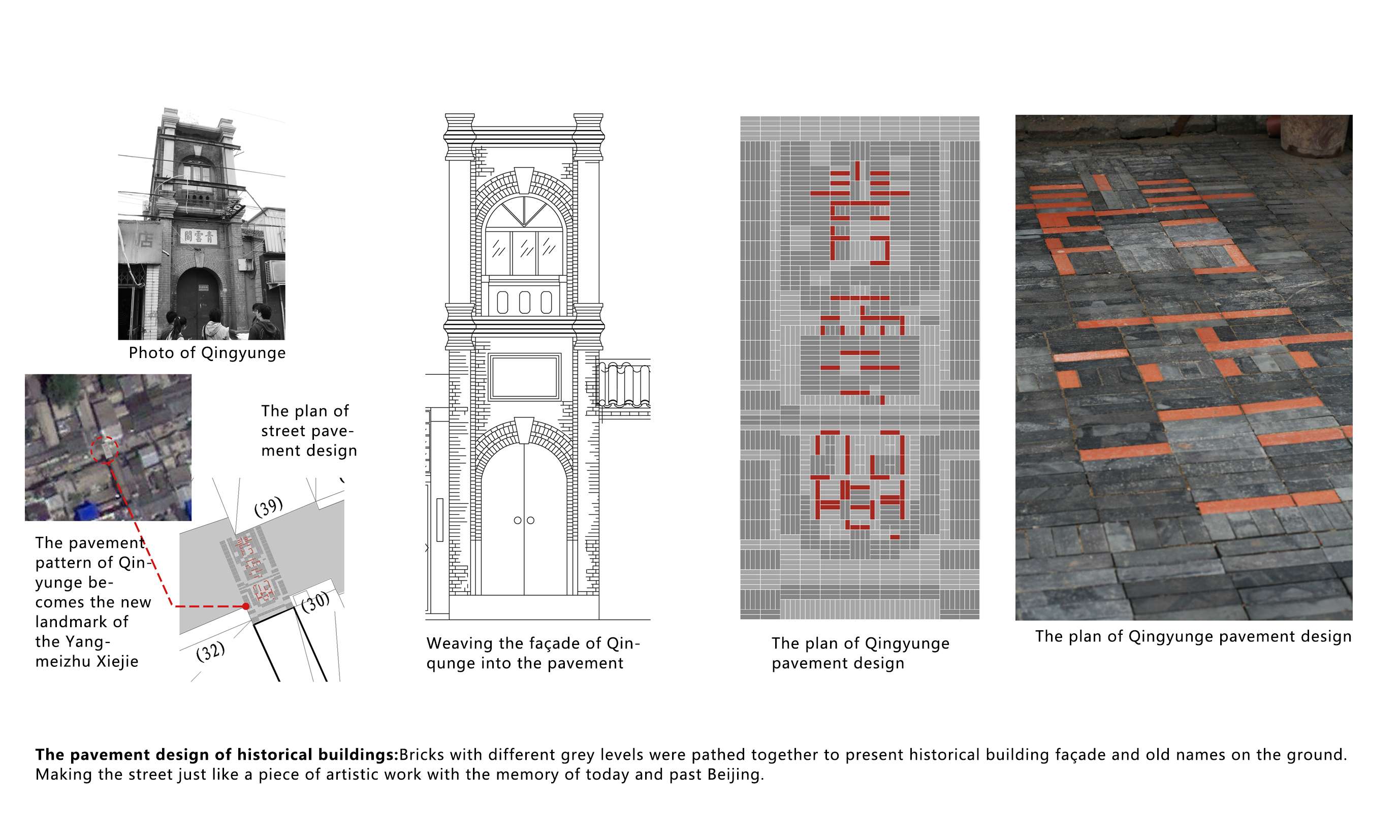 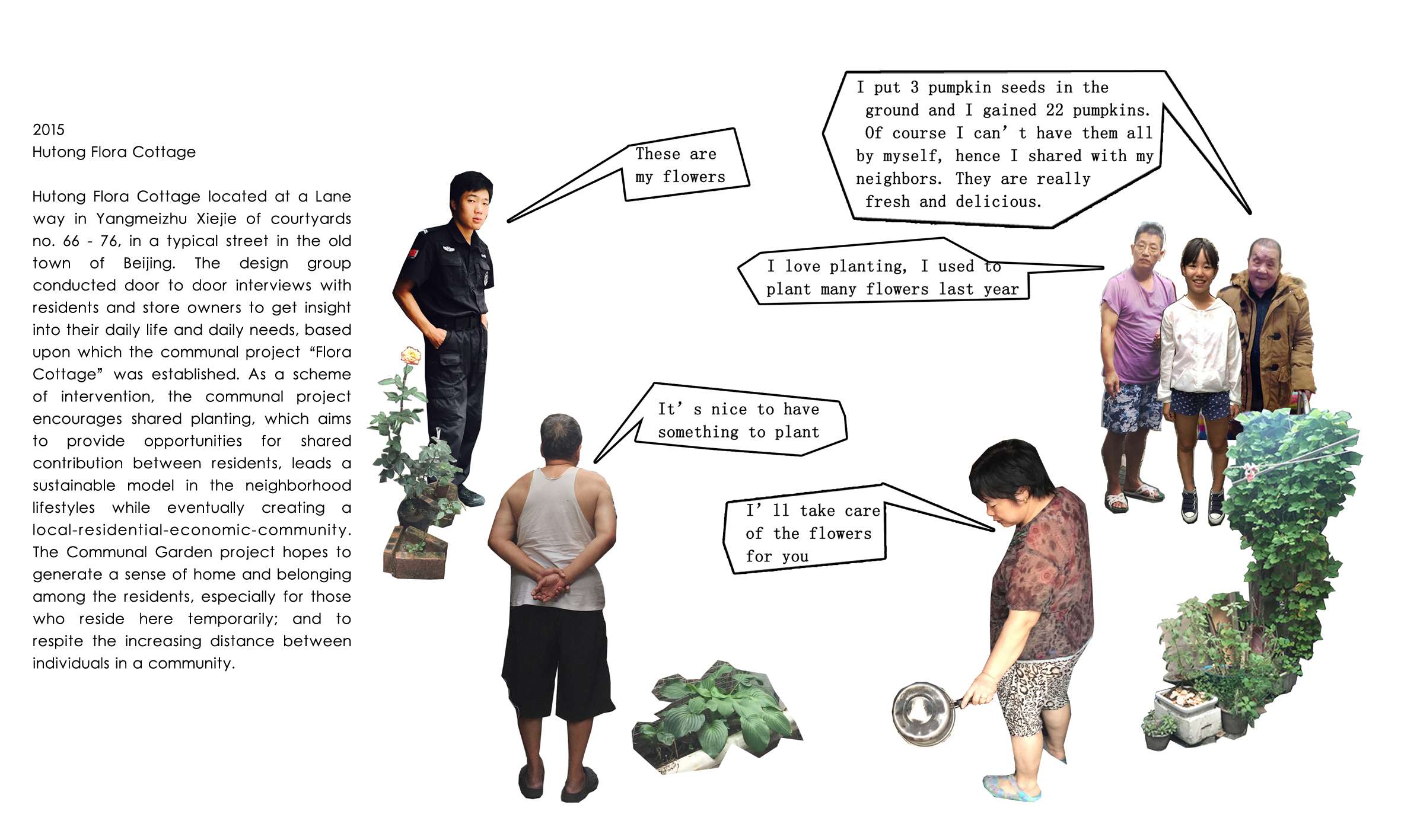 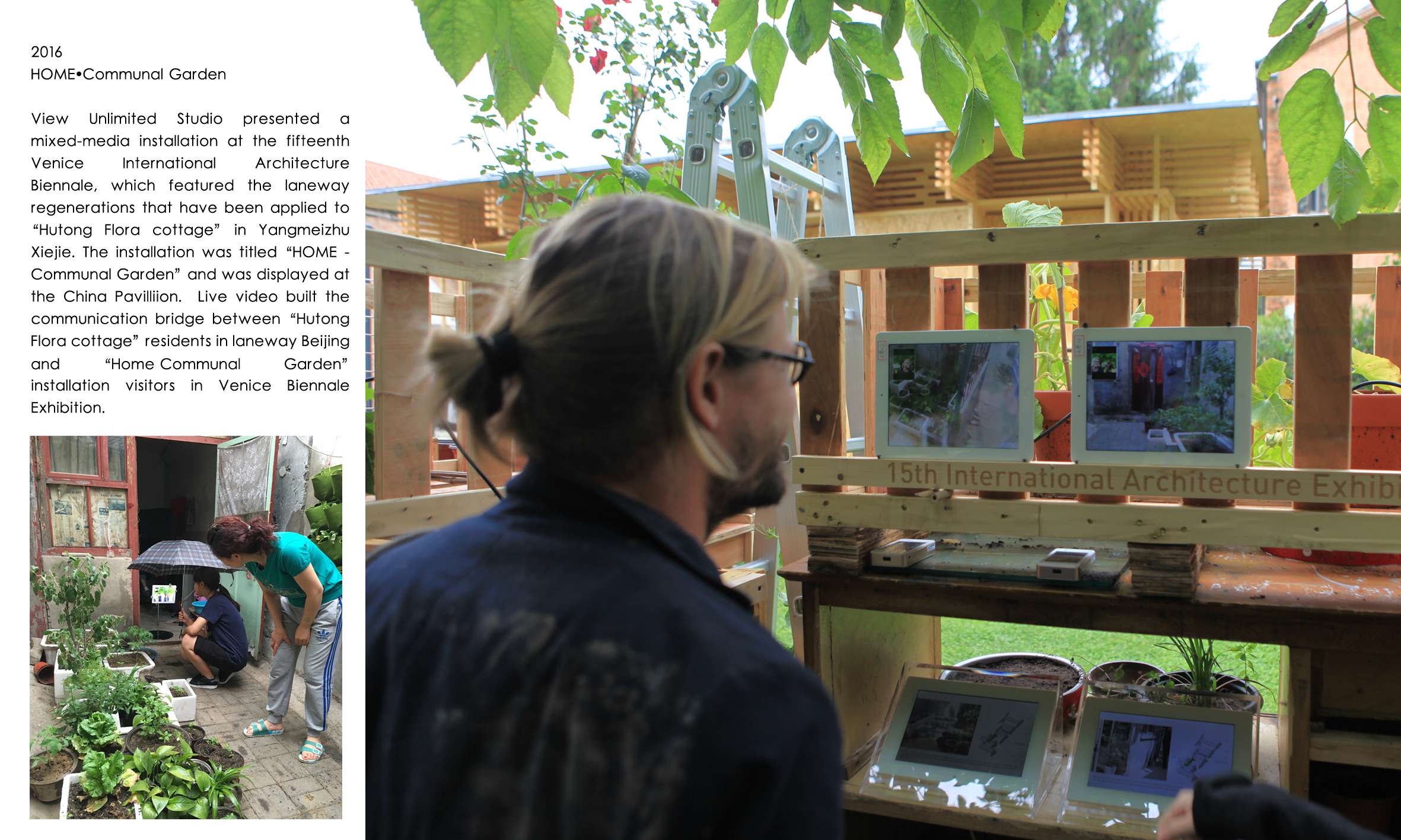 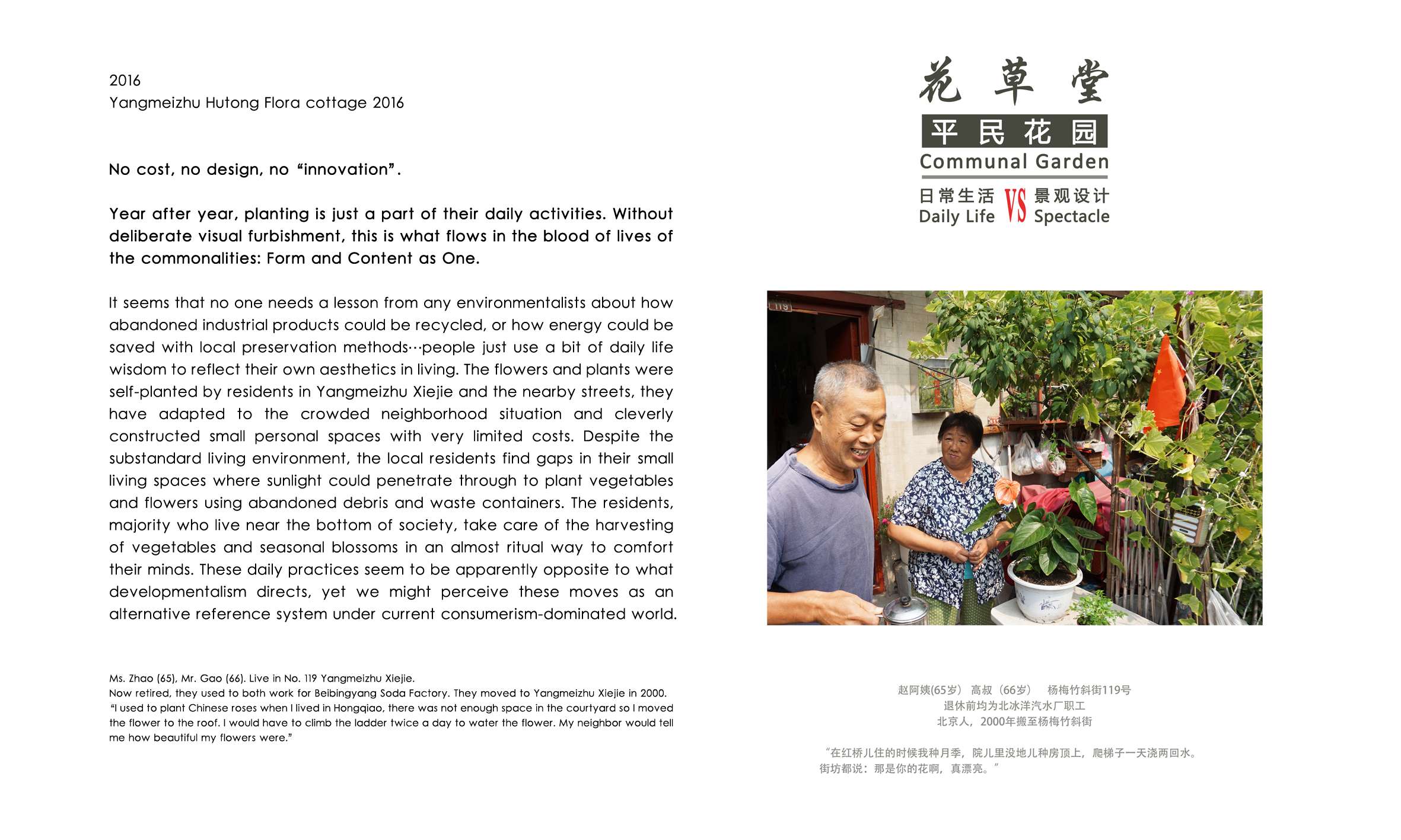 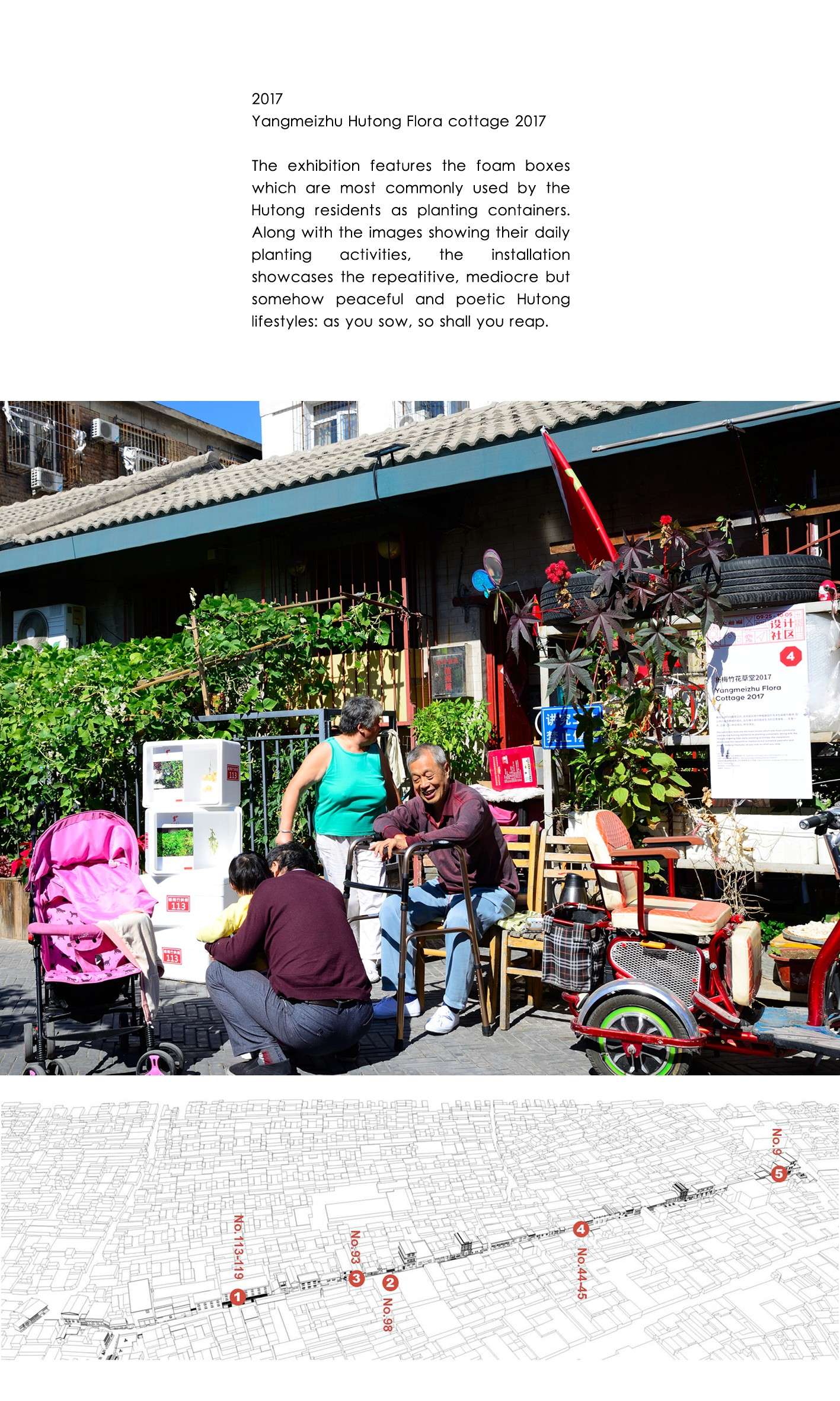 Yangmeizhu Xiejie is located in the Dashilar area of the Beijing old city and is approximately 400 meters long. It is an alley which has formed over the past 400 years, and which is different from the traditional square-like form that permeates much of Beijing. It exists as a collection of large and small book stores and shops from the beginning of the twentieth century, of which the footprints and stories of celebrities remained from various periods. It is a street where business, culture and city life coexist. At the same time, this street also features the remnant textures of the old city, which have been left behind by China's rapid urban renewal in recent decades. After the middle and high income class moved to new communities, the remaining residents in the alleys are mostly low income earners, elderly people and tenants. The embarrassing living conditions have reshaped their relationship with the city and also disintegrated their prevailing sense of identity in their neighborhood. The relocation of some of the residents in concurrence with the influx of migrants from other cities have resulted in the neighborhood relations that had once been friendly and familiar gradually disappearing. Unfamiliarity and a lack of trust has led to the people in the alley feeling alienated from each other and ignoring one another. The residents here are stricken with anxiety and the environment is not livable.

In 2012, the Beijing Yangmeizhu Xiejie environmental renewal project was launched. The project is a multi-tiered collaboration led by the government, commercial companies, architects and landscape architects, and is focused on brining transformation to the old alley. The main task of the design team is to clarify and protect the cultural elements, ie. the “genes” present within the hutong alley, and make up for their original defects through the use of design. Under the premise of not changing the texture of the Hutong, by emphasizing a coexistence between the old and new, and by creating a harmonious balance between modern fashionable elements, new business models, and the traditional lifestyle of the original residents. In doing so, the goal was to make these new changes become a part of the daily life of the residents. This was achieved through the use of minimally invasive and "interventional" methods, by providing targeted design for households in the Hutongs, including door by door refurbishing of the elderly people’s front door steps, adding flower beds along the street in order to achieve greater greenery, and also by applying floor tiles with a more improved drainage ability and improving the microclimate of the street. The focus of these actions was on introducing new elements together with the existing historical elements, so as to reflect the historical and cultural heritage of the street itself by establishing an port-interface compatible with contemporary urban life and the old neighborhood.  In doing so, it has been possible to revitalize the four hundred year old neighborhood once again.

With regards to the organic renewal of Yangmeizhu Xiejie, the design team’s chief concern was centered around the daily life of the residents, including: addressing the fundamental improvements of the living conditions in the alley so that the alley’s inhabitants could be settled; by providing (even limited) compensation at a low cost which may address the gap between the quality of life and the living conditions caused by rapid urbanization and commercialization; and in the case of insufficient interest from the public, by integrating and combining limited resources, so that the residents may benefit from an optimized living environment instead of simply wishing for a "good life" in the future.

During the three-year period after the implementation of the project, the design team observed that the attitude changes towards the renovations and spontaneous plant cultivation activities. Thus with regards to subsequent follow-up work, the role of "designing for residents" will be transformed into "guiding the residents in how to create a spontaneous living environment".

In 2015, the design team commenced construction of the Zayuan (mixed-courtyard) public space of Yangmeizhu Xiejie. What the designers have emphasized is the voluntary action of the residents and the sense of spontaneous participation. We set up the "Hutong Flora Cottage" to provide the occupants with the means to get closer to one another through the form of natural intermediaries, such as cultivating flowers and planting vegetables, in order to build harmonious neighborhood relationships akin to those of the old Beijing hutongs, and restore the cultural artistic concepts inherent to the old Beijing alley which were previously lost. In a place far away from the mountains and rivers, the residents may feel the beauty of life via the flowers and trees in front of their own doorway, and gain a new living experience in the midst of this green space. During the period of 2015-2017, the design team applied the " Hutong Flora Cottage " as a platform to hold multiple planting exhibitions for the local residents. Through organizing the participation of the residents in planting activities, it was possible to enhance their primary roles in community life. This was the key to creating a sense of home and cultivating a sense of belonging in relation to the neighborhood, and it was also the key condition with regards to stimulating the vitality of the old city. During the implementation of the project, the design team was impressed by the relationships between individuals in the Hutong and their simple (or one could even say humble) expectations towards life.

Compared with the landscape design projects that the design team previously engaged in, these public welfare projects are more akin to a social work experiment in the sociological sense. The goal of our efforts is not to design a spectacle for outsiders or tourists that may be consumed, but rather through the medium of design to participate in the social reconstruction of contemporary China. Although economic interest and political appeals are the fundamental driving force for regional development and cultural transformation, if these external forces can not be organically combined with the subject that has been transformed, and if they fail to make provisions for positive interactions, the result will inevitably be destructive.  What we are concerned about is how to enhance personal dignity in this period of social transformation, and how to cultivate mutual respect and rebuild harmonious interpersonal relationships among individuals and groups. The direction which we are pursuing is to enhance the autonomy and participation of local residents through various activities such as cultivating plants in inappropriate places, using waste as planting containers; autonomous behaviors which have become respected public behavior. The resulting thinking is as such: How to position and apply the role of both design and designer in social life. Our participation in public welfare projects does not solely stem from a desire to show our sense of social responsibility and compassion, but is also an endeavor to discover and establish an effective mechanism to benefit those who live on the margins of society through the application of a variety of means. Throughout this process, the designers had to compromise their own aesthetic ideals, and design concepts, striking a balance between the survival logic and basic aesthetic tastes of the ordinary people, in order to allow the design to naturally return to its inherent function and bring into full play its original potential. In the practice of design, compromise generally means that the designer is required to give up some of their own subjective imagination and artistic will, even extending to forsaking their personal ideals. Instead, the designer is responsible for playing the role of coordinator between social life and economic development. The transformation of this role seemingly dispels the subjectivity of the designer and weaken the aura inherent of a "designer". However, design, whether applied in architectural design or environmental design, should be targeted at specific design objects. It should function as a solution to the elements of time, place, and people. Placing the attention on the person in the midst of the particular situation should be the core principle and primary purpose of the design, so that form and style are simply the externalization of this purpose.

From design to project implementation and subsequent improvements, the design team has been involved in the project for six years. In 2018, the project received support from the government for further renewal and upgrades. The renewal of Yangmeizhu Xiejie is a work in continuous progress.