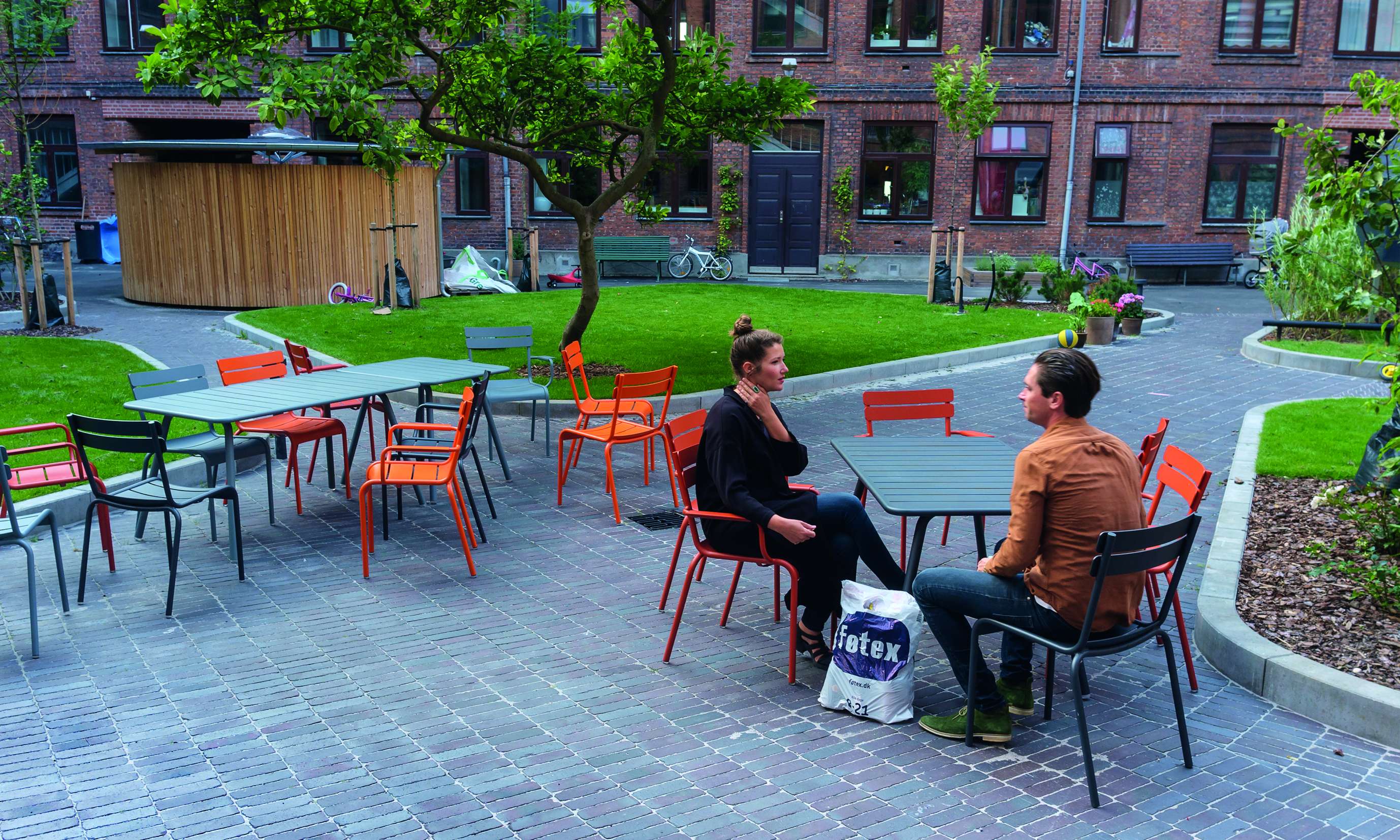 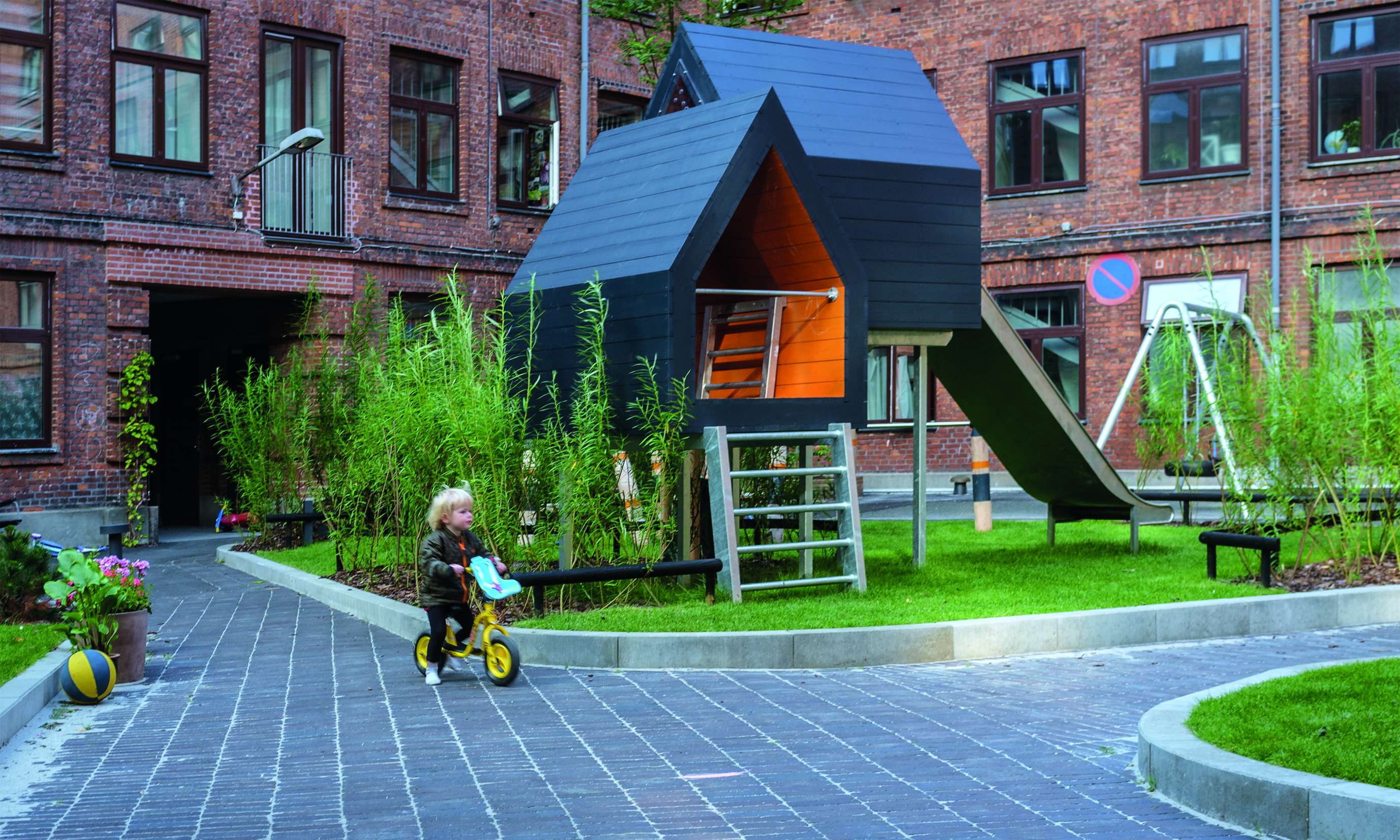 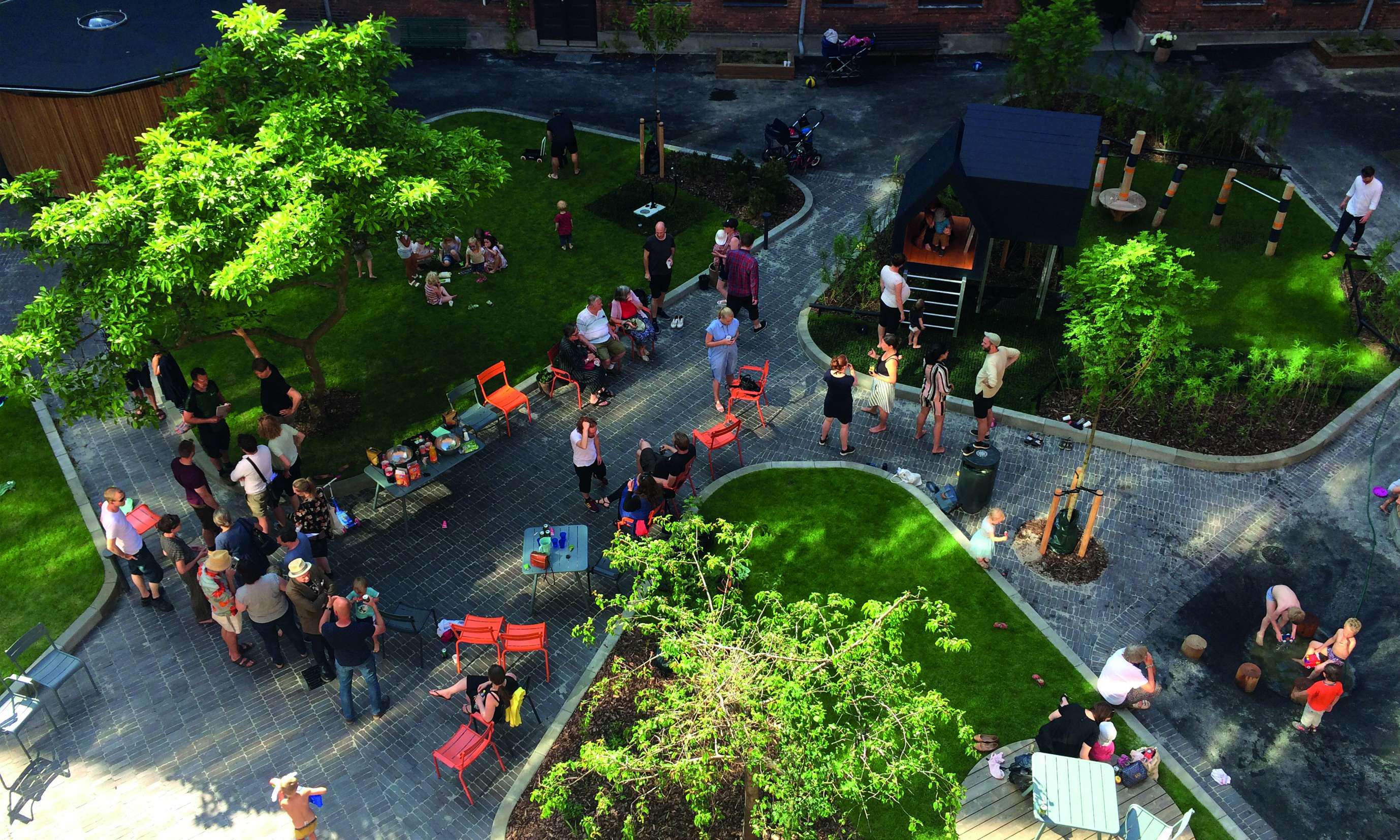 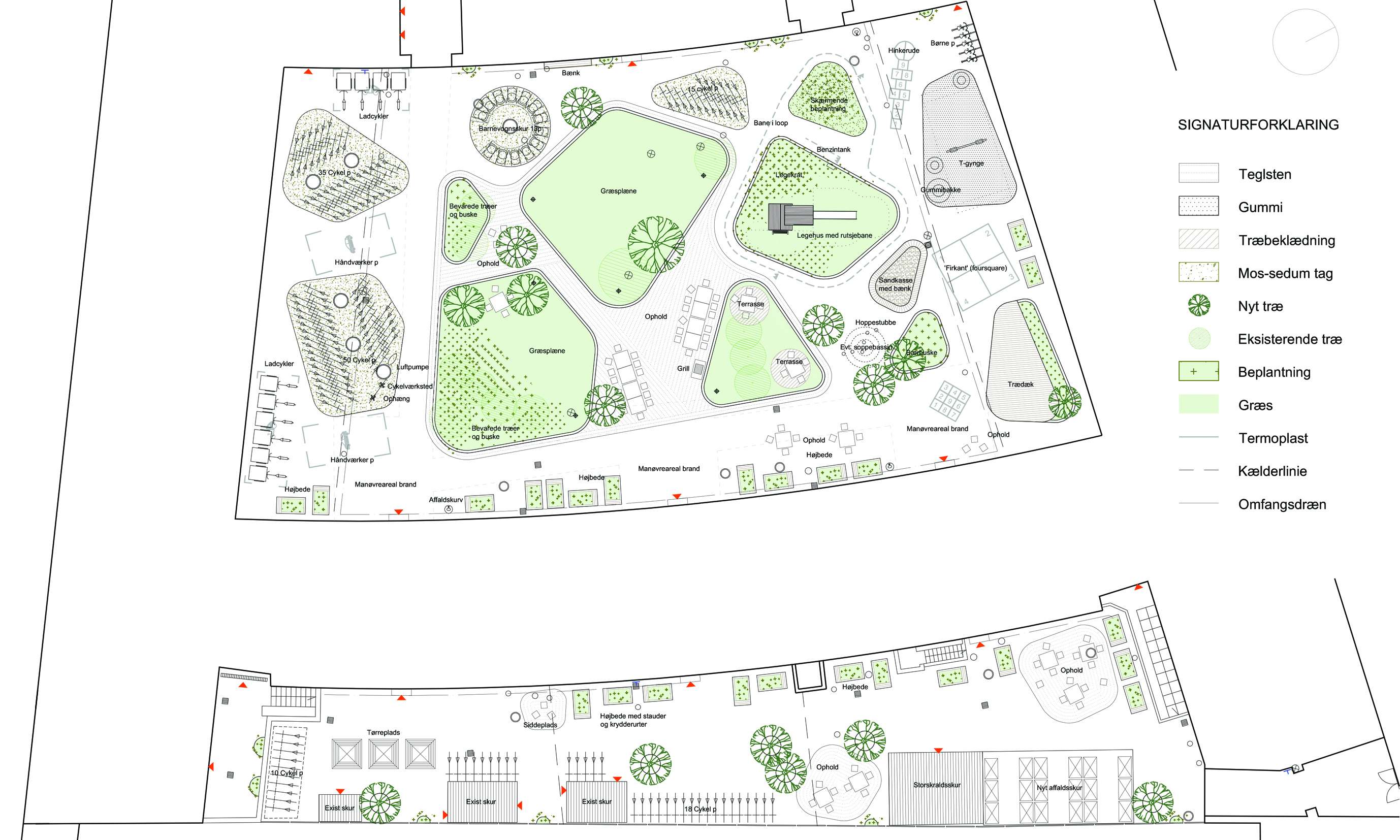 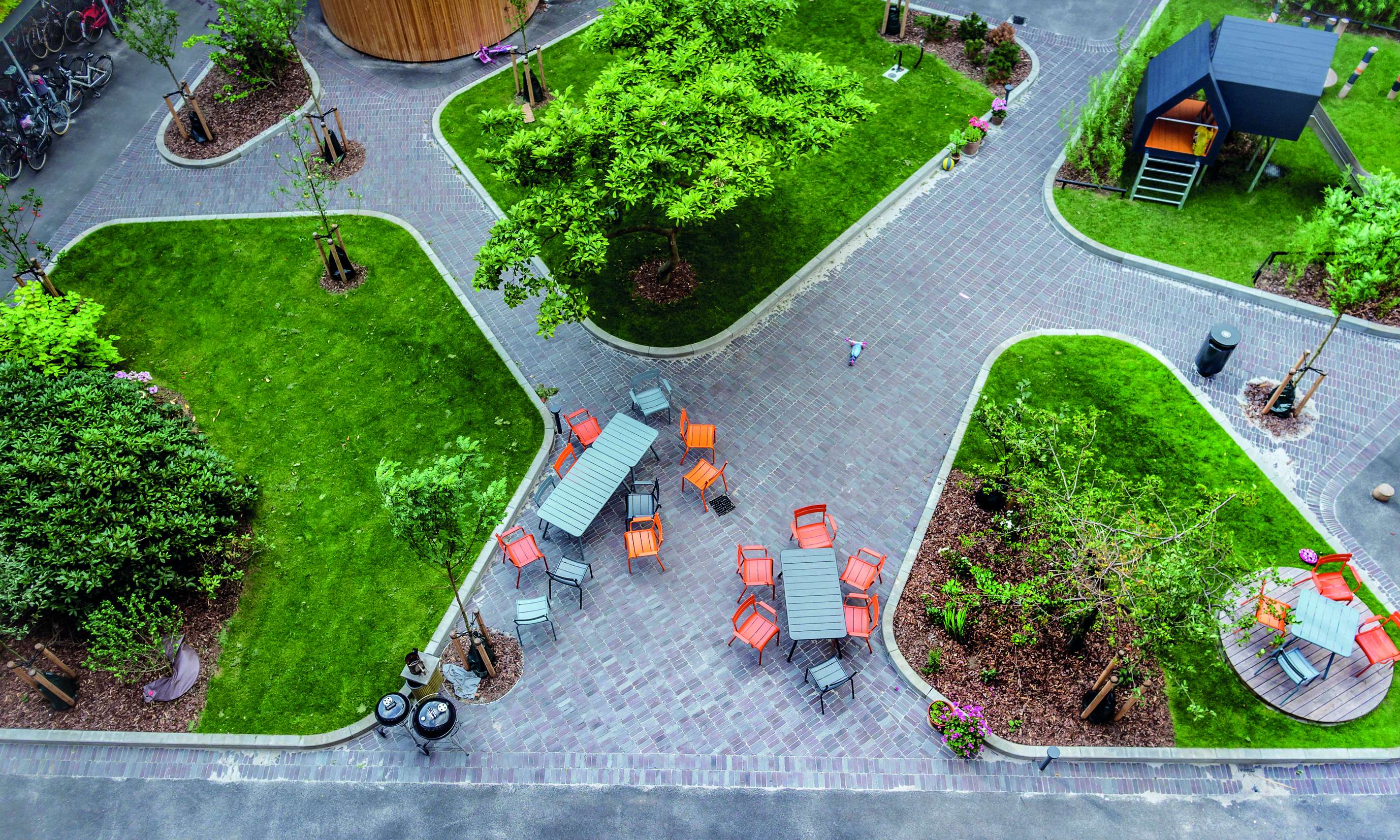 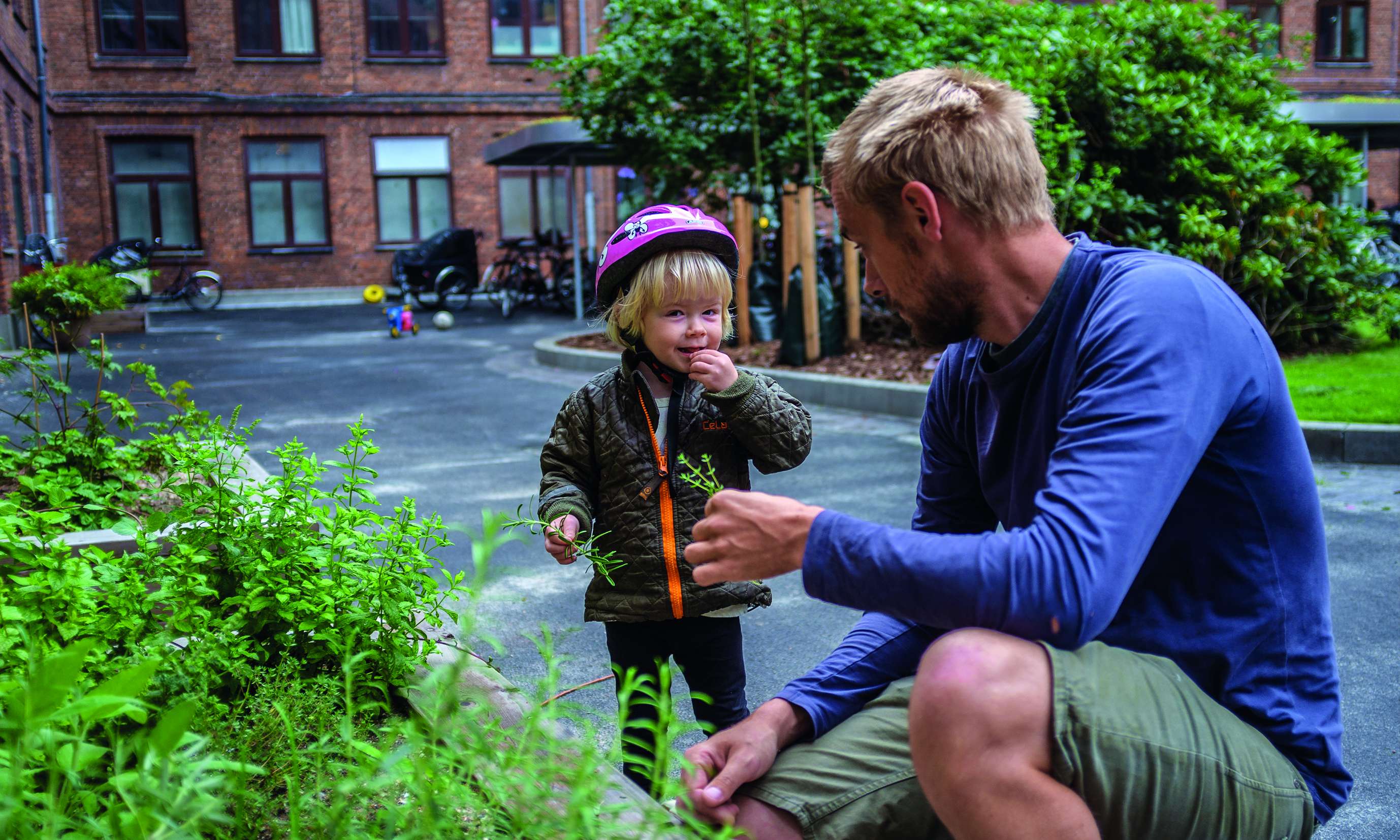 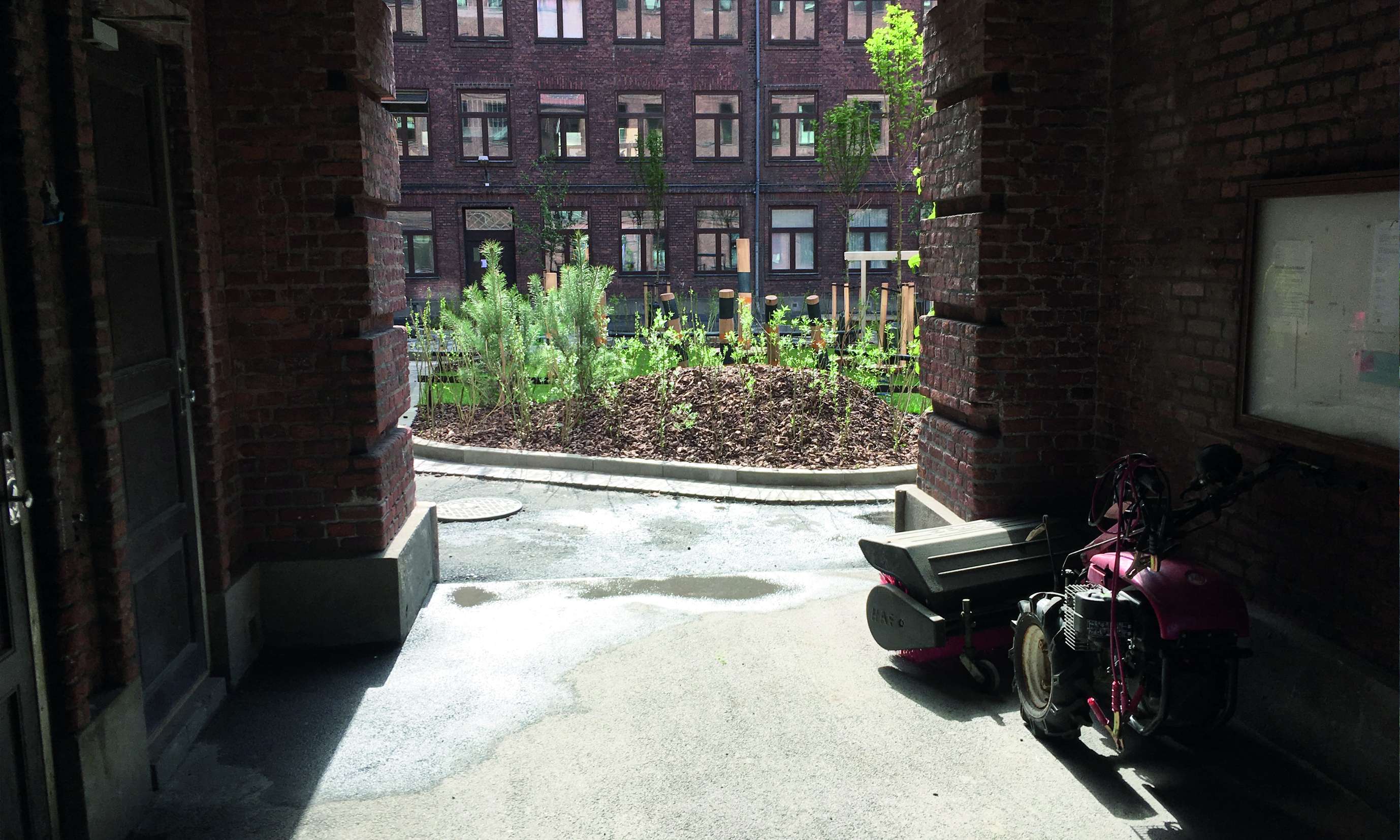 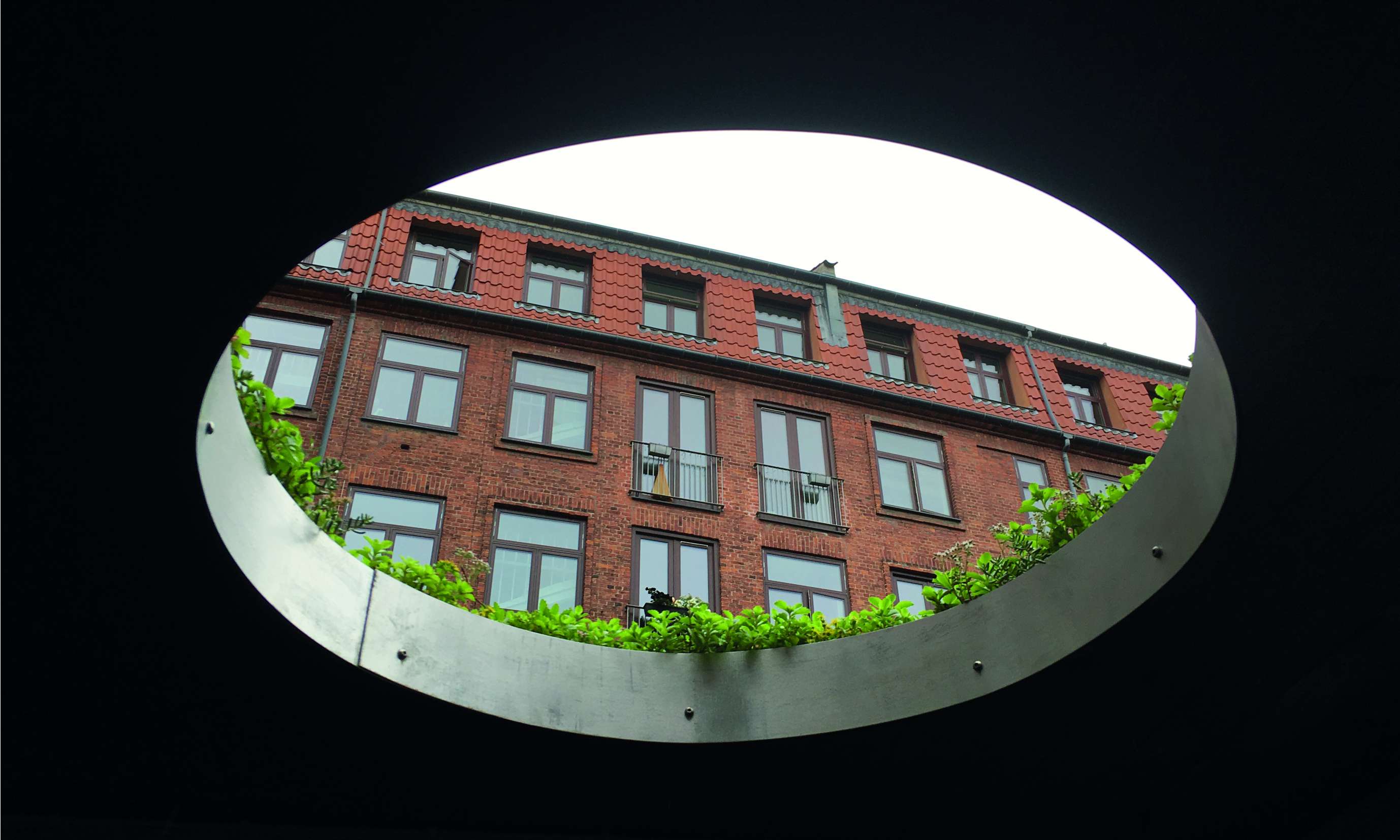 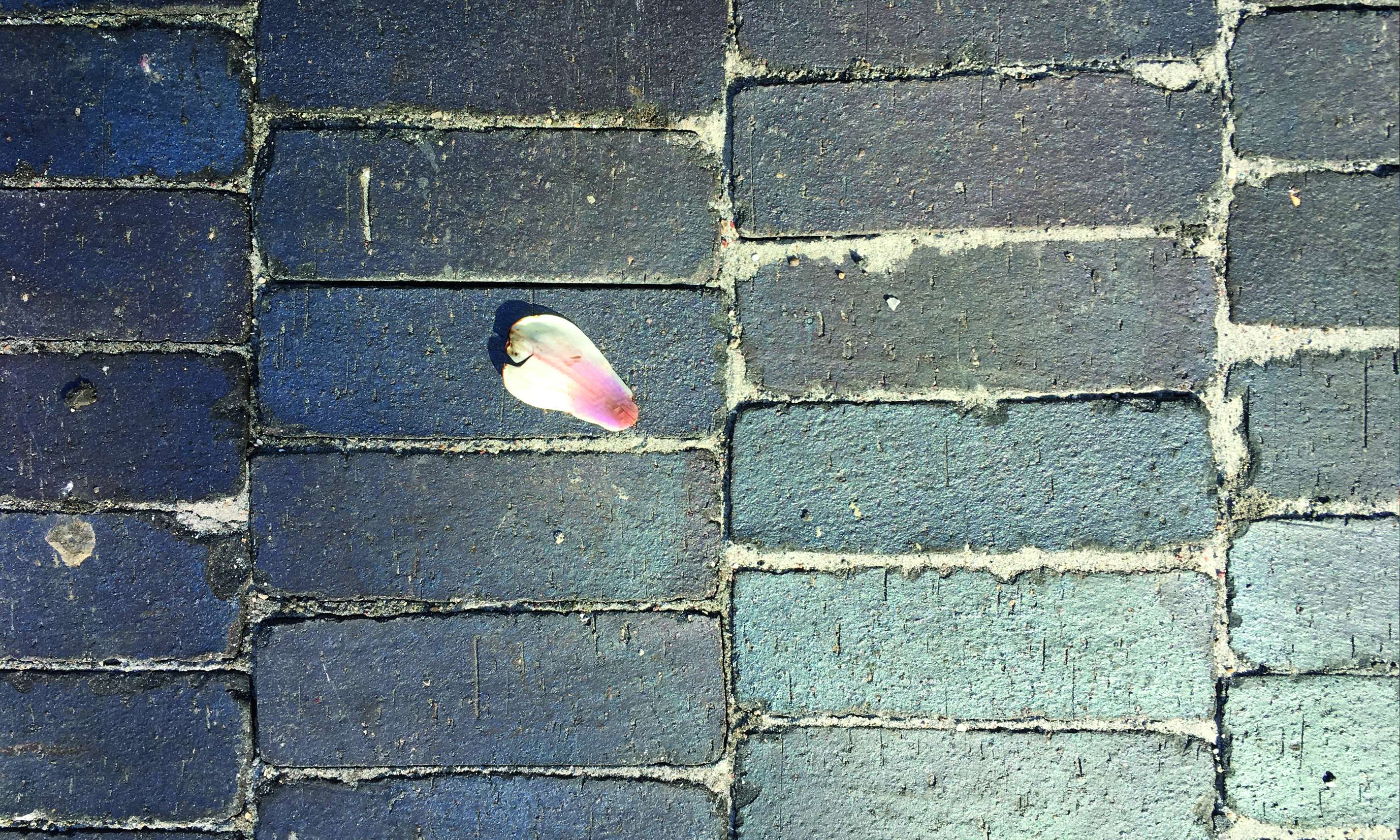 The private courtyard in ’AB Nørrebrohus’ is an inspiring example showing how a renovation can integrate and renew practical functions so that they become part of the poetry that gives the residents quality in their everyday life.

Before the intervention, the courtyard was separated in a green middle and a wide grey zone with asphalt along the buildings. The green part was almost inaccessible with only one entrance and all the daily “traffic” between gates and stairwell happened in the edge zone. The playground was worn-out and all the parked bikes were placed randomly and took up a large part of the courtyard.

The project is based on comprehensive user involvement. A team of residents has been an integrated part of the project development together with the landscape architect - from the early wishes to the realization of the future functions and atmosphere. Major decisions like bike parking and budget of construction have also been based on their comments and points of view.

The renovated courtyard appears green and vigorous. The middle green part has been expanded considerably and a new hill with willows ensure shelter from the wind through the gate in the sunny part of the courtyard. New walking paths mark the ‘direct route’ from gate to stairwell and allow everyone to pass freely between the many green islands, terraces and places to sit. This new disposition has increased the sense of community among residents, now the many small areas to sit make it convenient to be many groups in the courtyard at once and it is now easy to pass each other in a casual way, get talking or letting communities arise spontaneously.

The playground area is framed by planting which screens the play and gives the children the opportunity to create their own playful universe and helps clarify the location of the playground. The colors match with the colors in the courtyard and a small depression in the asphalt acts as a paddling pool for the kids if the parents block the outlet on a sunny day.

In the shaded part of the yard all bicycles are parked under green roofs which in an homogenous way blend in as part of the green islands when the residents looks down at the courtyard from their apartments. Existing big trees and attractive plantings are preserved and give the new yard a special value from day one. Many new fruit trees are planted, the asphalt in the edge zone is renewed and the walking paths in the central part are made with bricks which bluish tone in a poetic way draws down all the colors of the sky in the yard.

This project is an example on a fruitful process of dialogue where the original vision about creating a bottom-up structure is followed through by a democratic process where decisions have been made in collaboration and qualified by the many voices. During this process the common ownership of the project has evolved across conflicting interests and different needs. In the construction phase all residents were invited to take part in planting the new trees, again with the point of ownership in focus. Also many of the raised planting beds were made ready for the residents to sow and plant their own herbs and berries. Today a team of residents called “The Green Fingers” have the responsibility for maintaining all the green.

From being exclusively a practical space the courtyard has now become the residents’ common garden where everyone can meet and stay – here is room for both noisy behavior and bare toes in the playing area and the possibility to find yourself a quiet spot to enjoy a book and a cup of coffee. In the daily life all the different small niches in the yard are in use and when it is time for special occasions like flea marked or a common “courtyard party” there is room for booths and tents in the unprogrammed areas. The new courtyard has a huge impact on the surrounding apartments in the building, both for the ground floor where the residents has a direct view out on the lively activities that take place in the yard and from the upper stories where residents look down on a mosaic of green islands and bluish tiles. From the street bypassing people now look into a green and vigorous inner yard and the willows and pines tells the story about a small green oasis behind the gate.

Sustainability, both economically and socially, has been a core point through the project. A high degree of reuse and a focus on building upon existing qualities resulted in an economical latitude for introducing new elements of high quality. In terms of the social sustainability it has been important in collaboration to organize the courtyard with room for differentiation so that different needs is considered coincident with creating opportunities for social interaction and temporary community to arise.