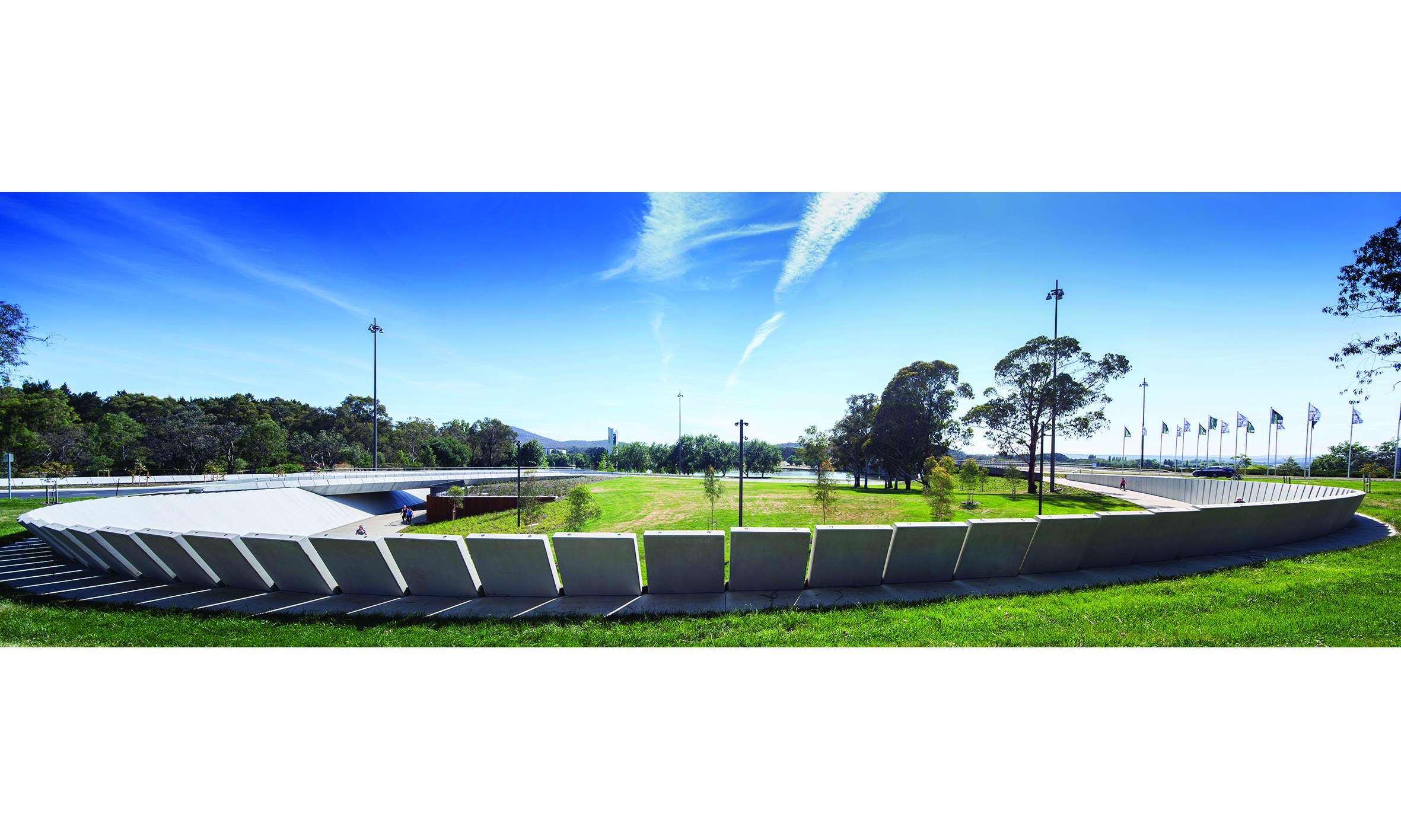 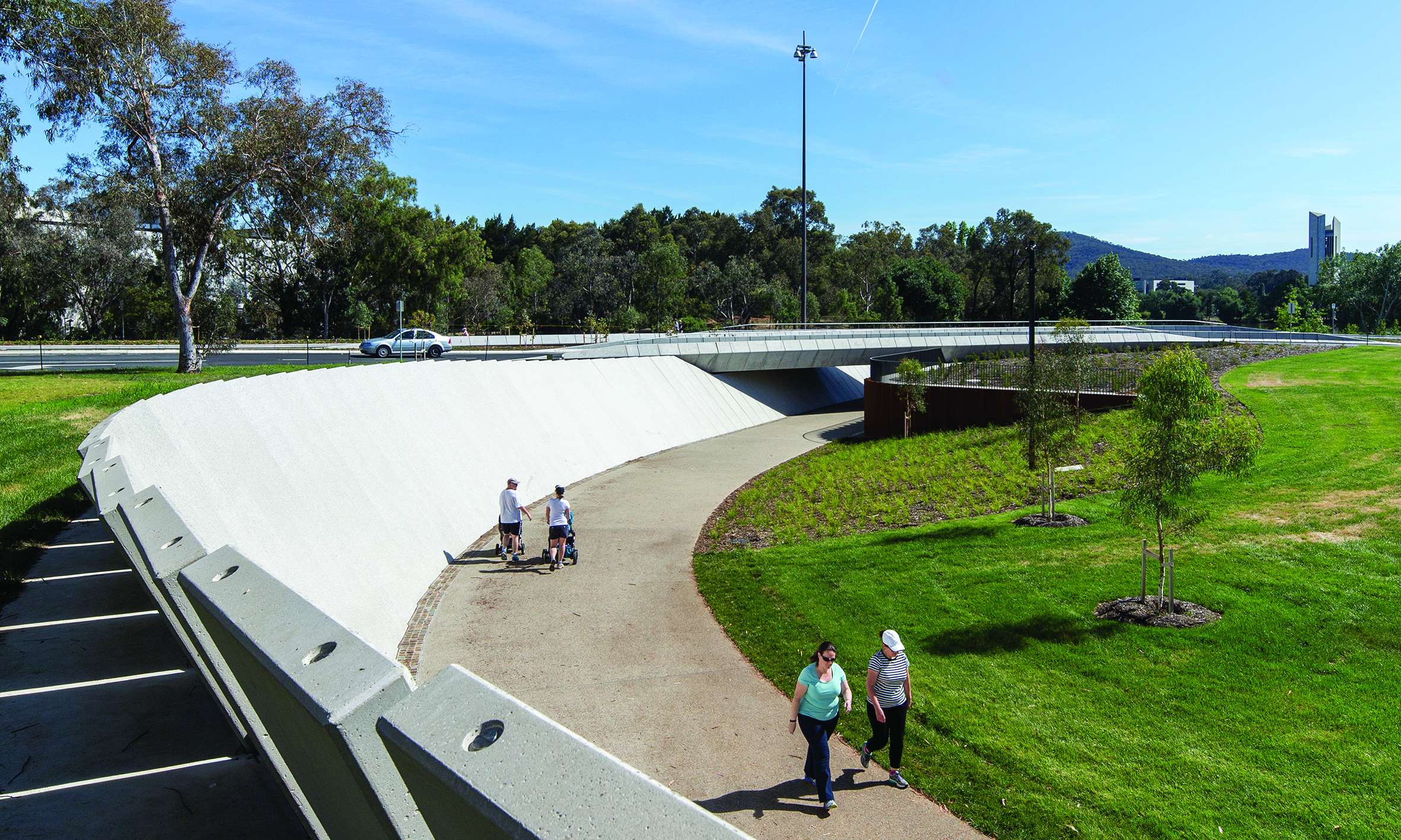 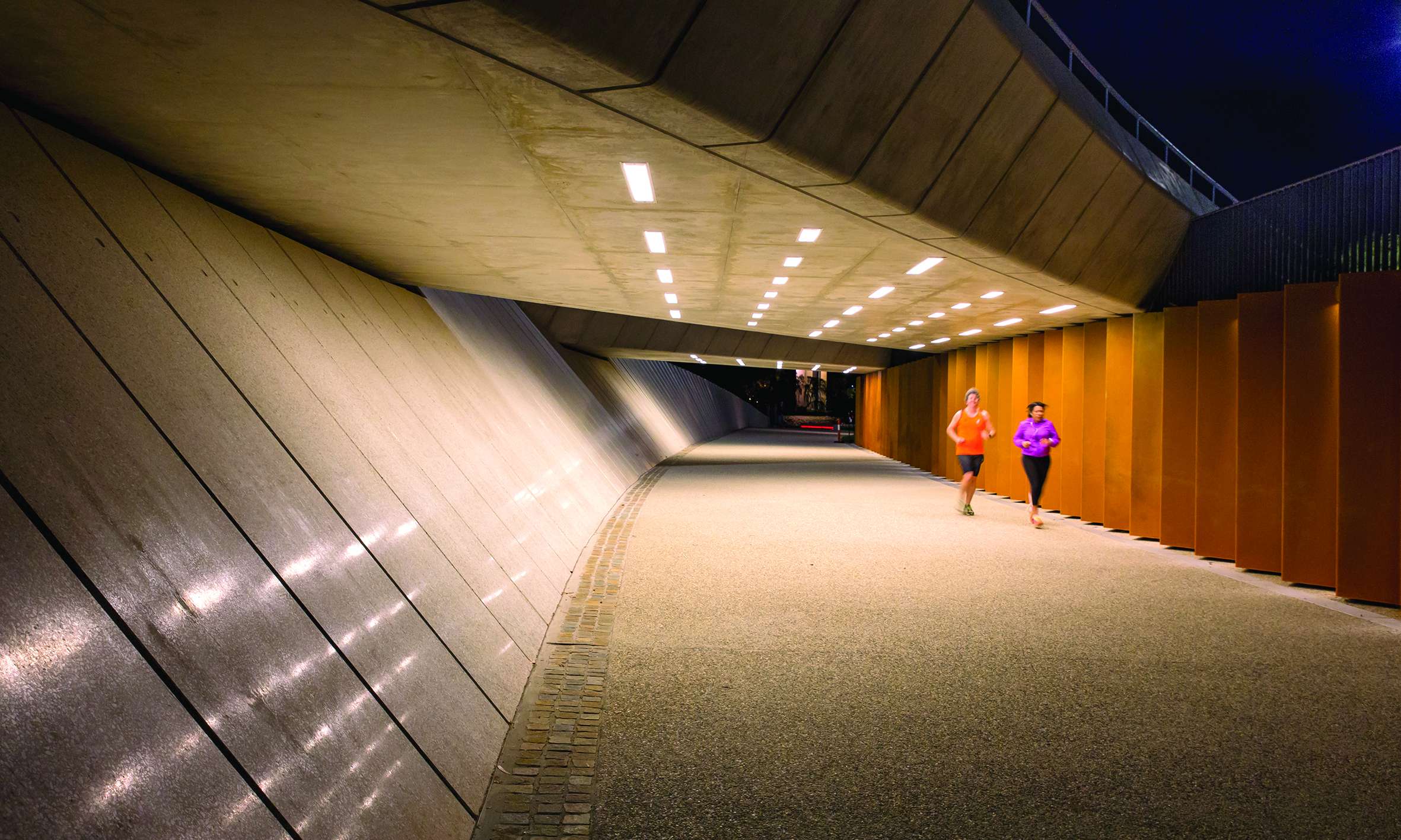 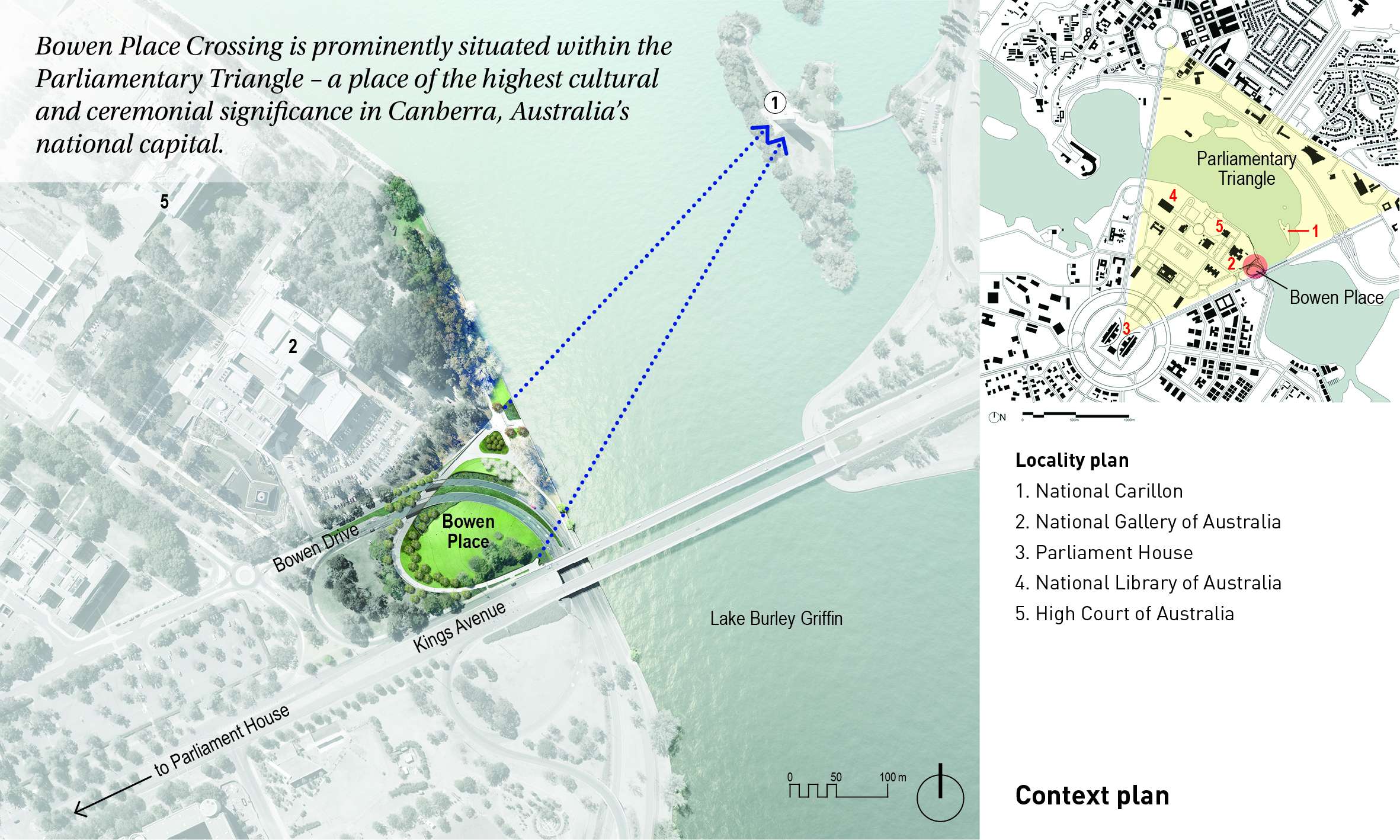 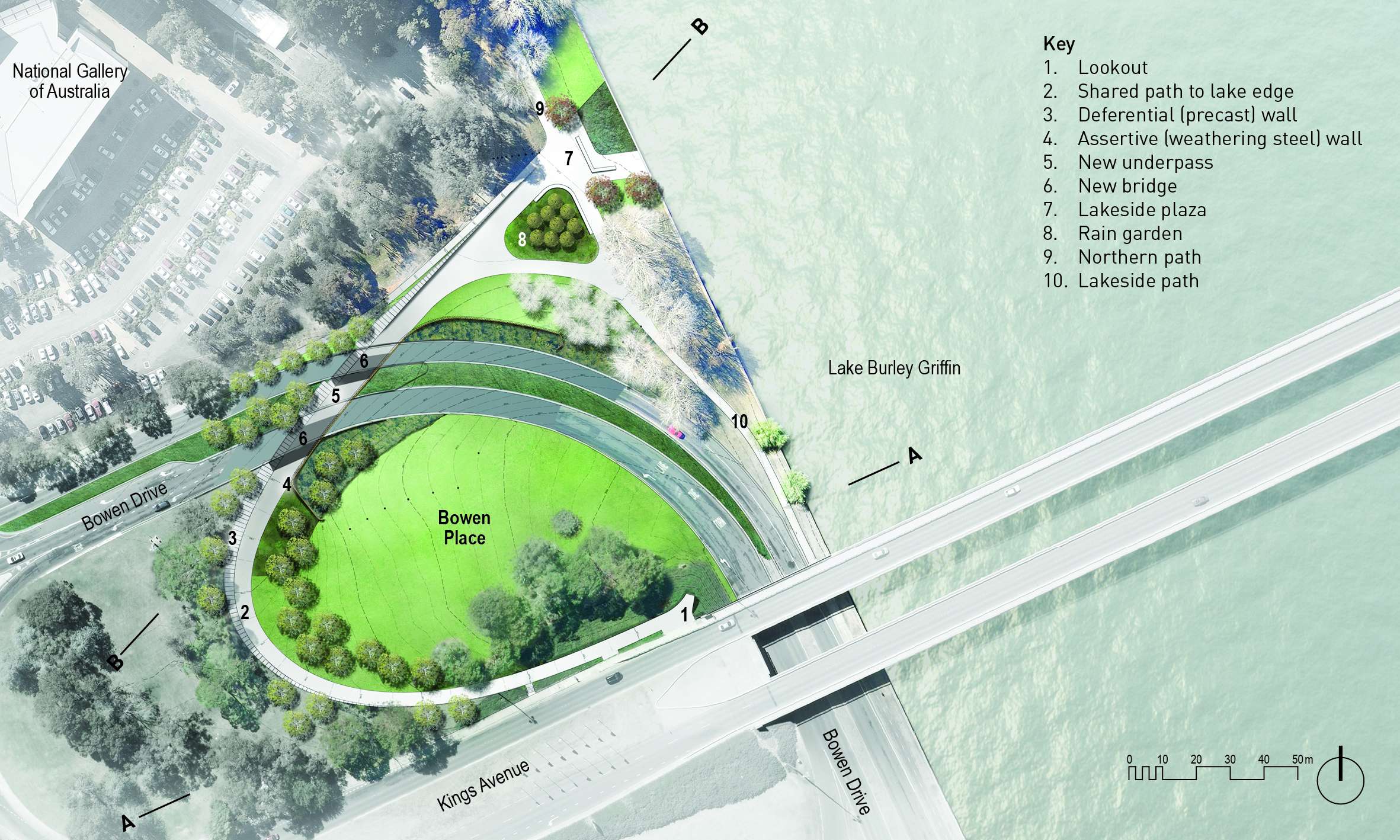 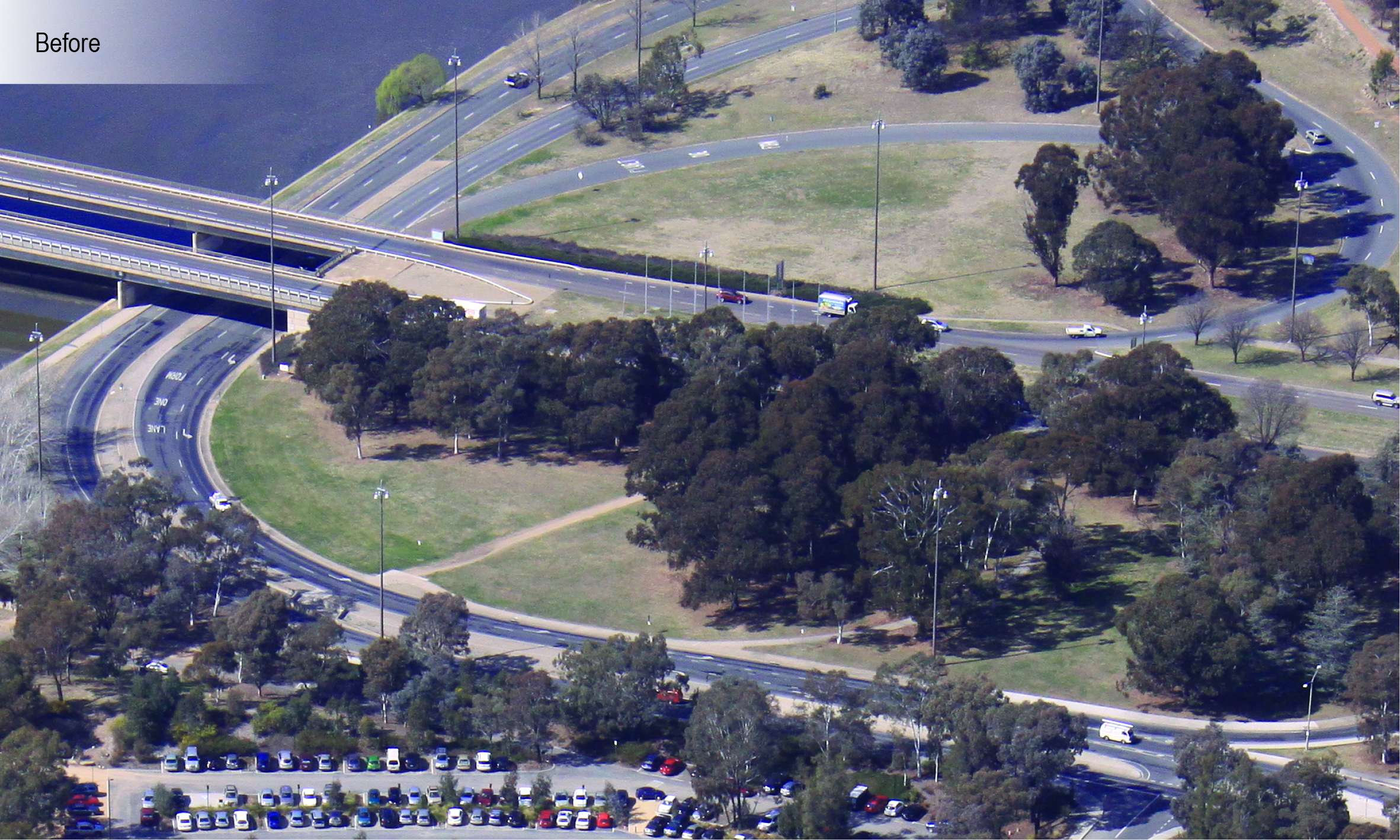 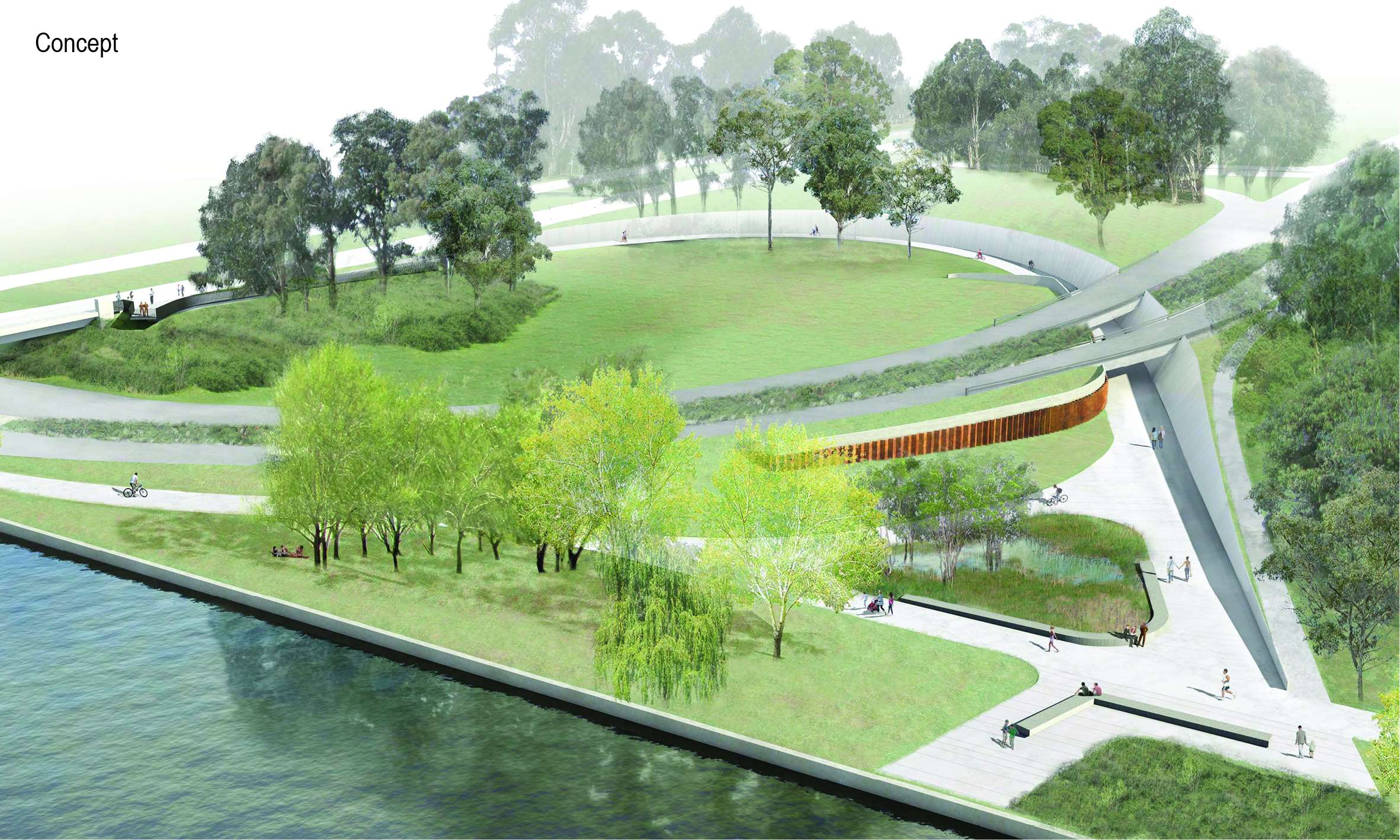 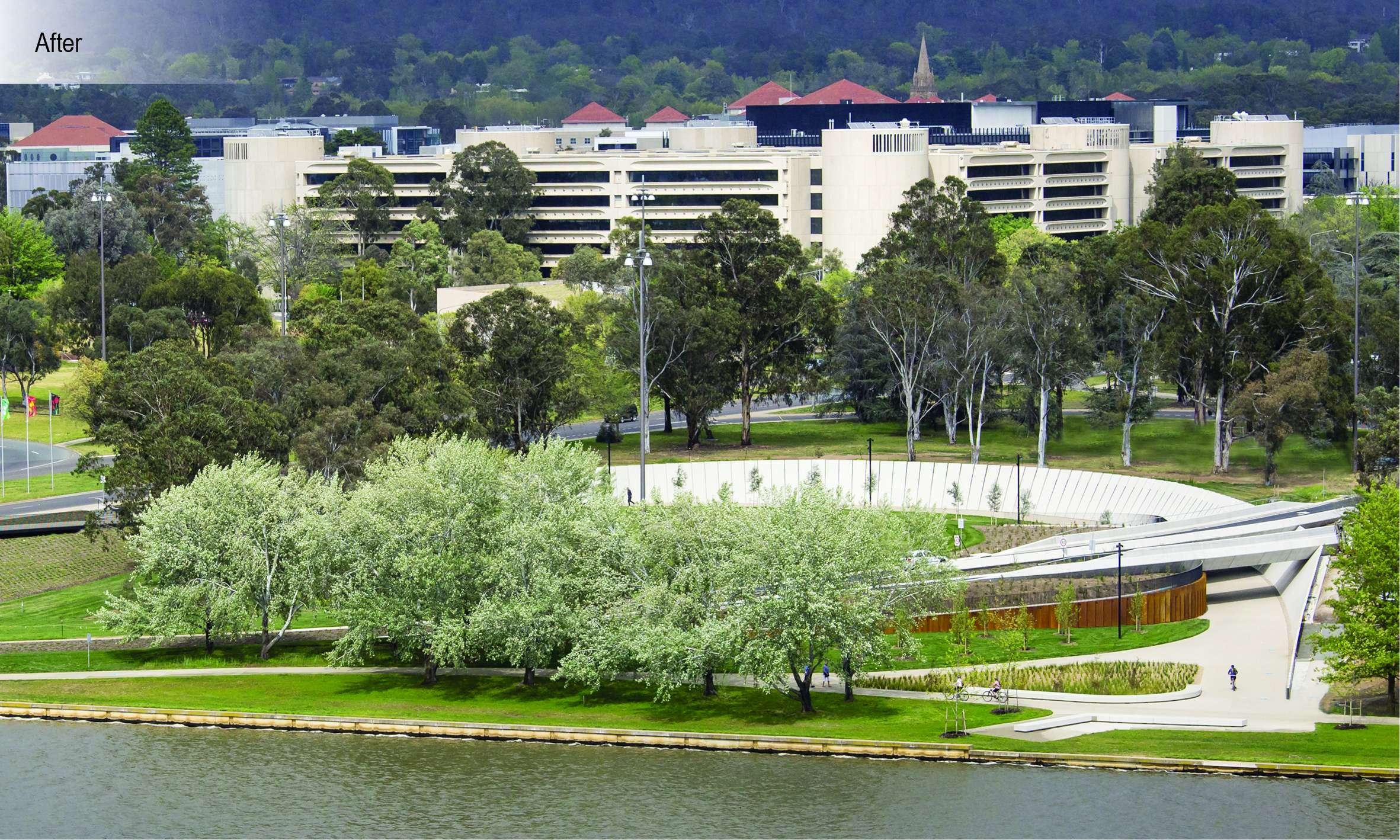 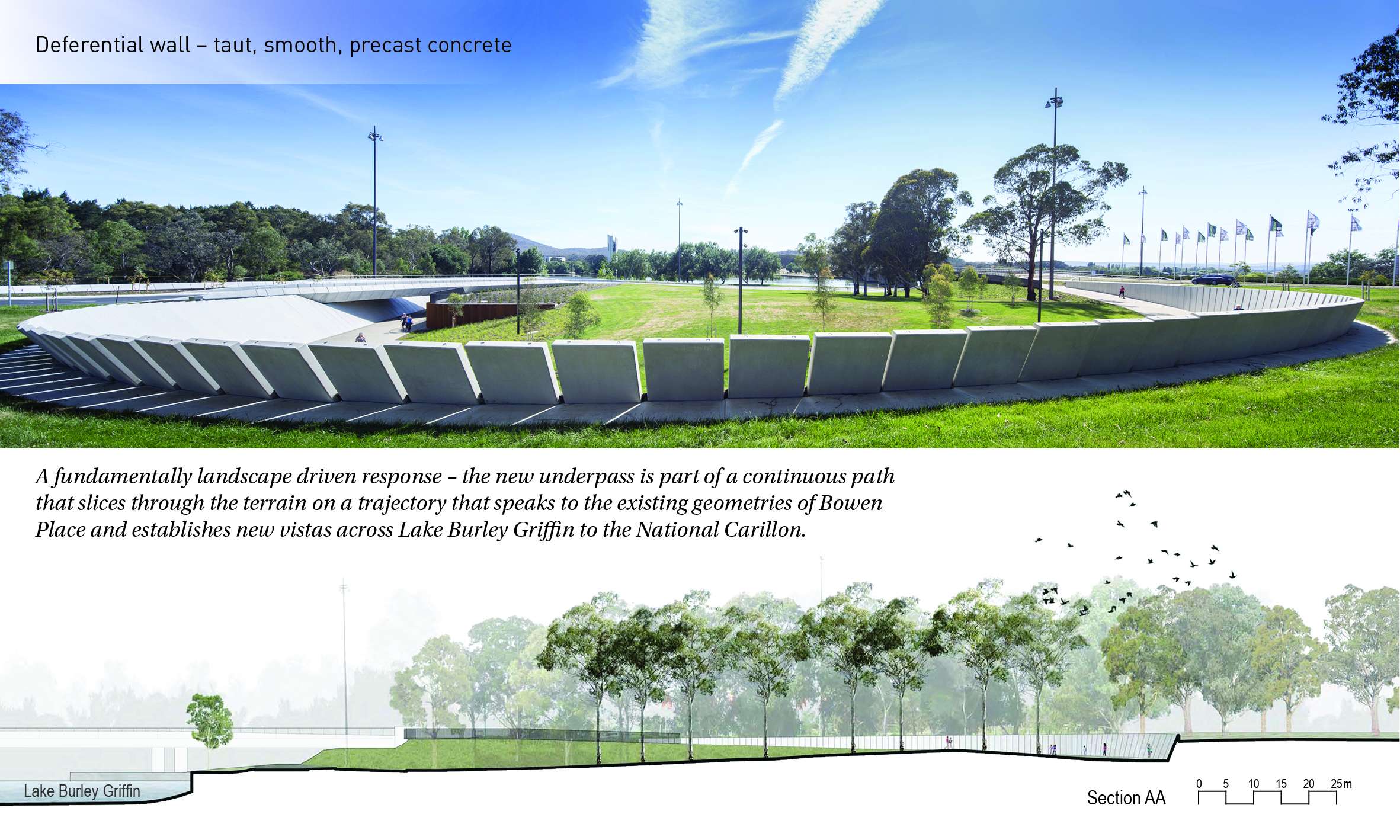 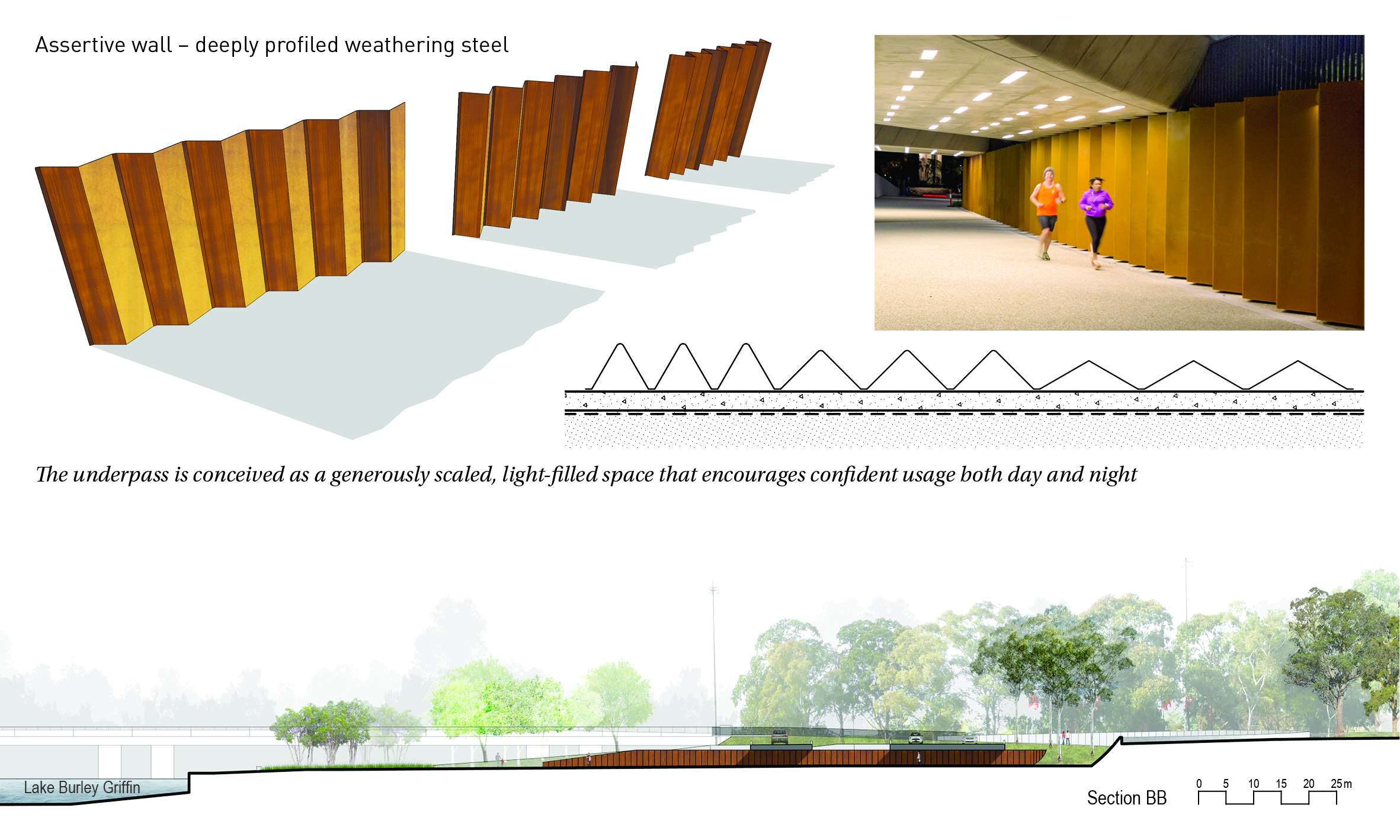 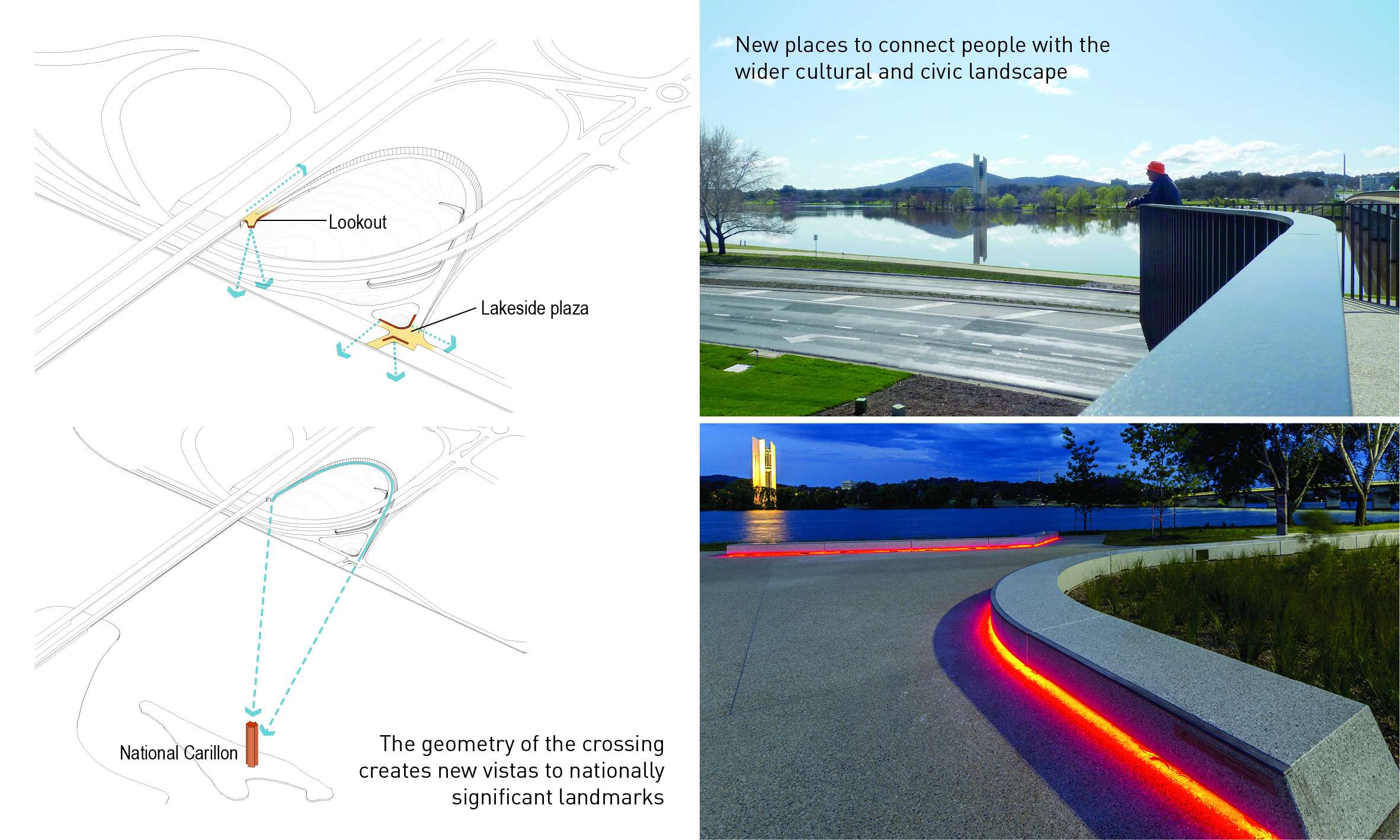 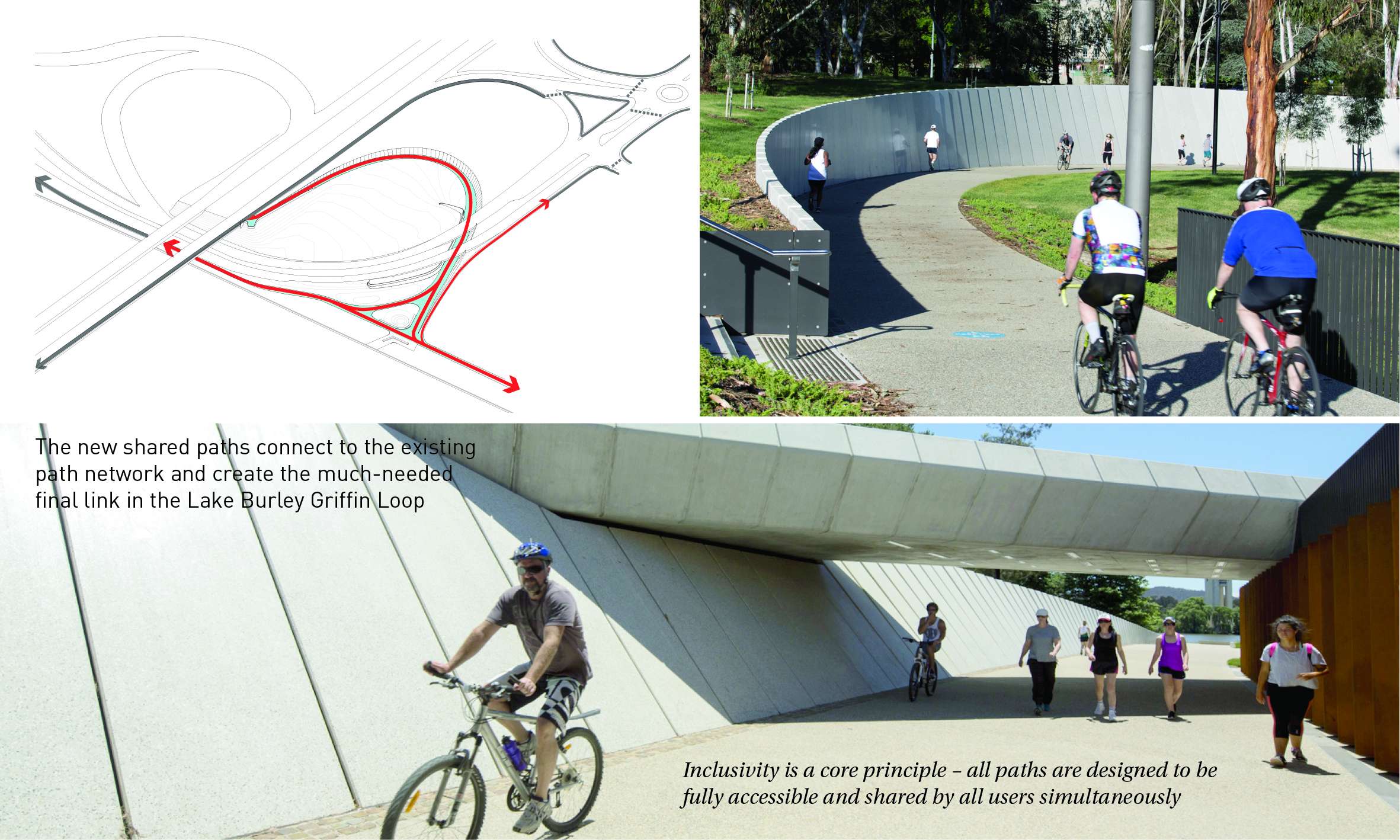 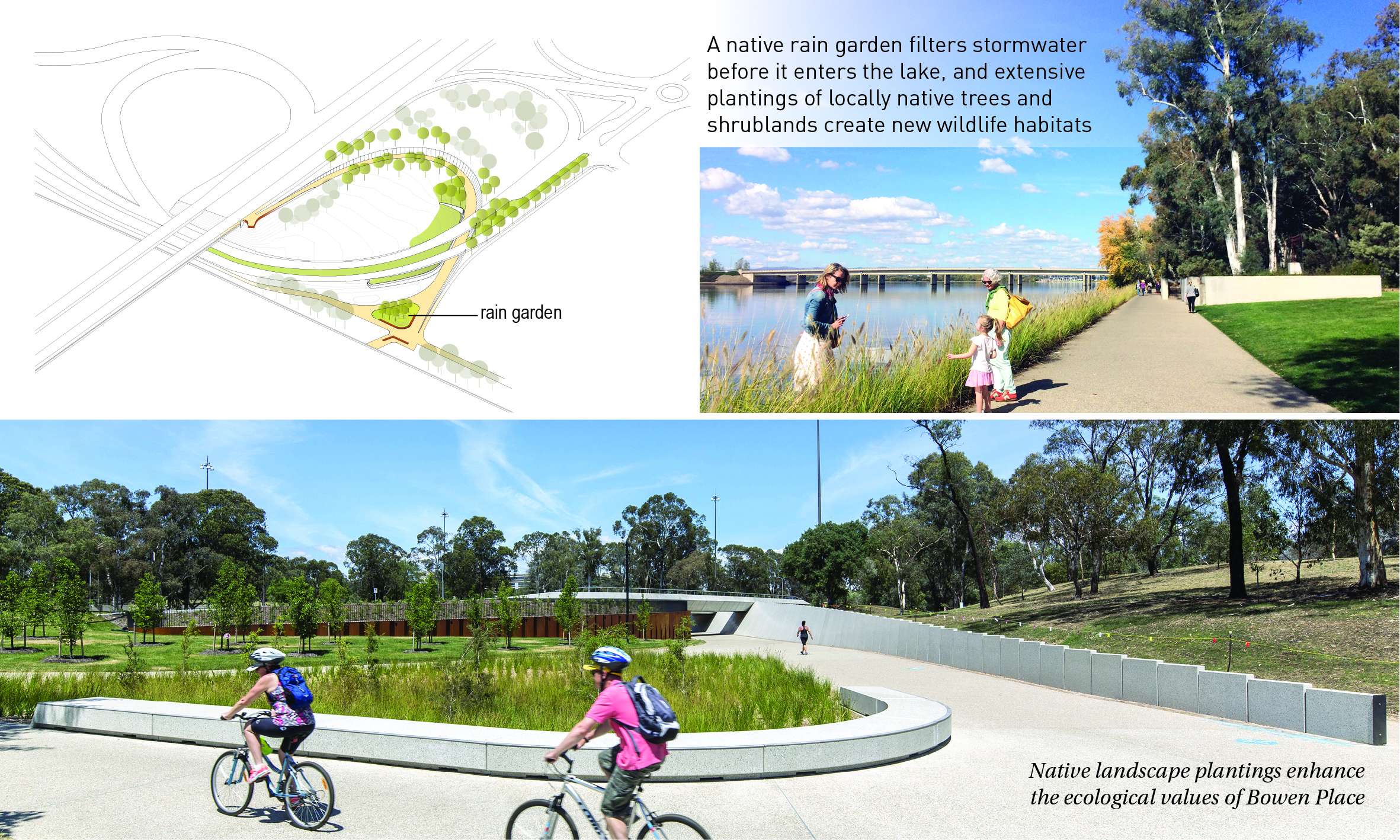 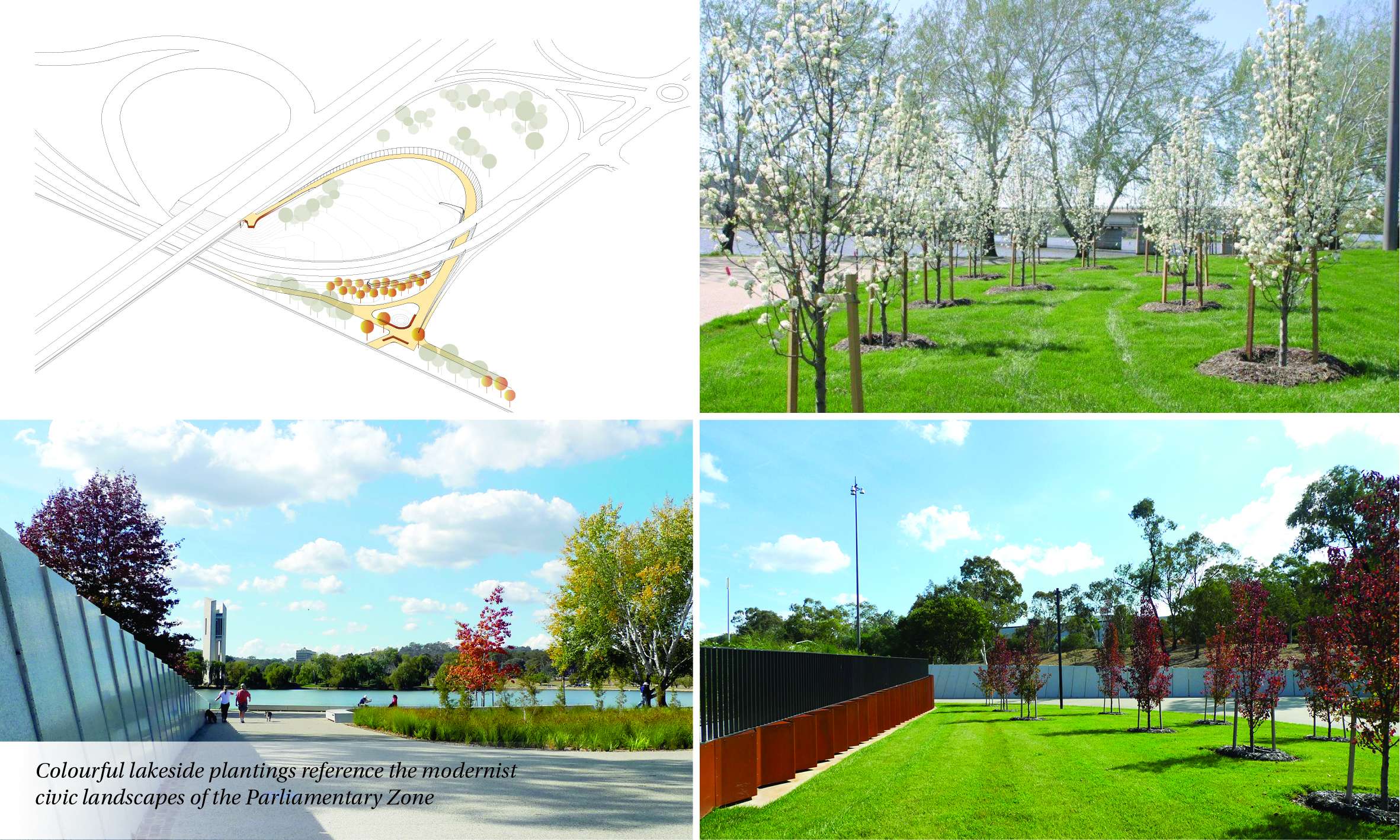 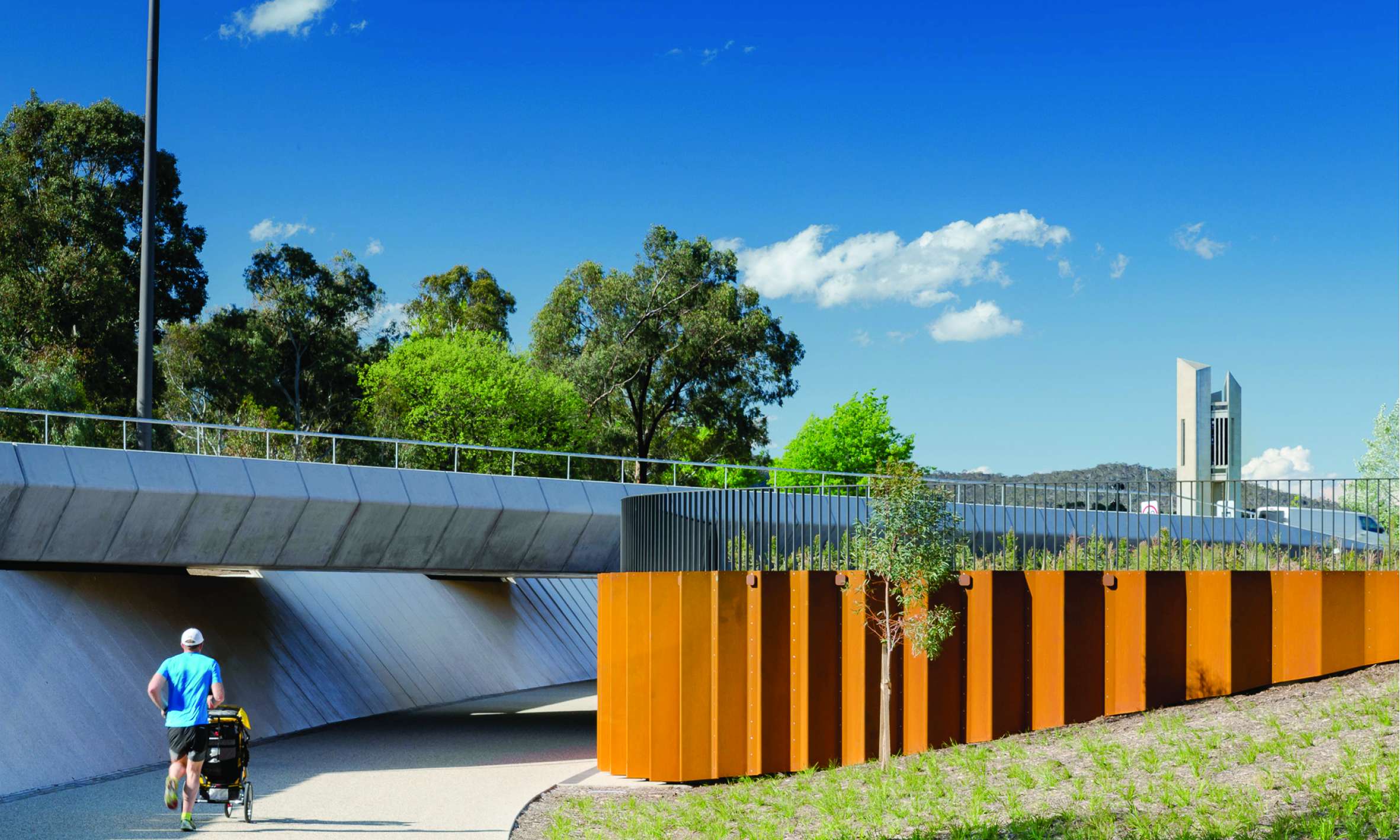 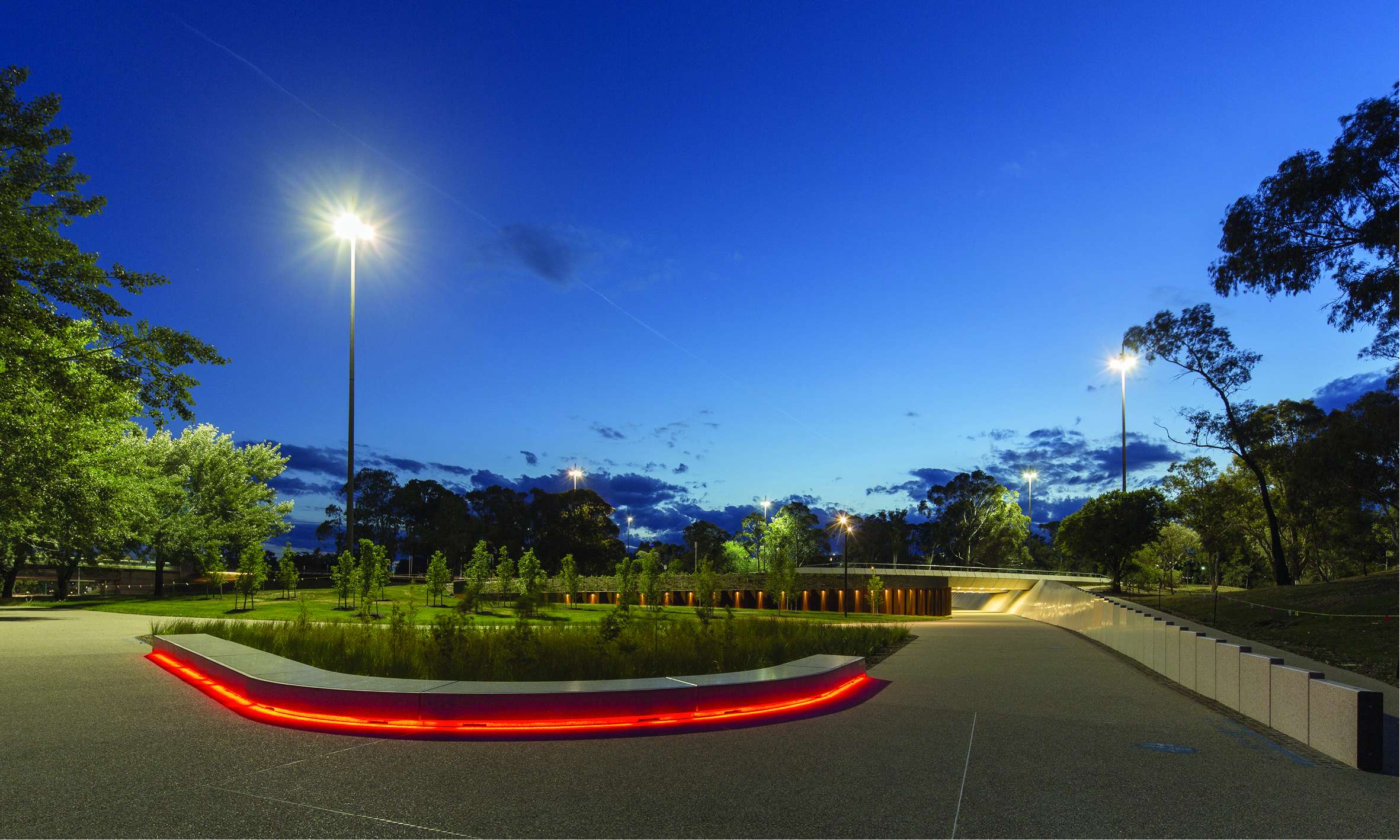 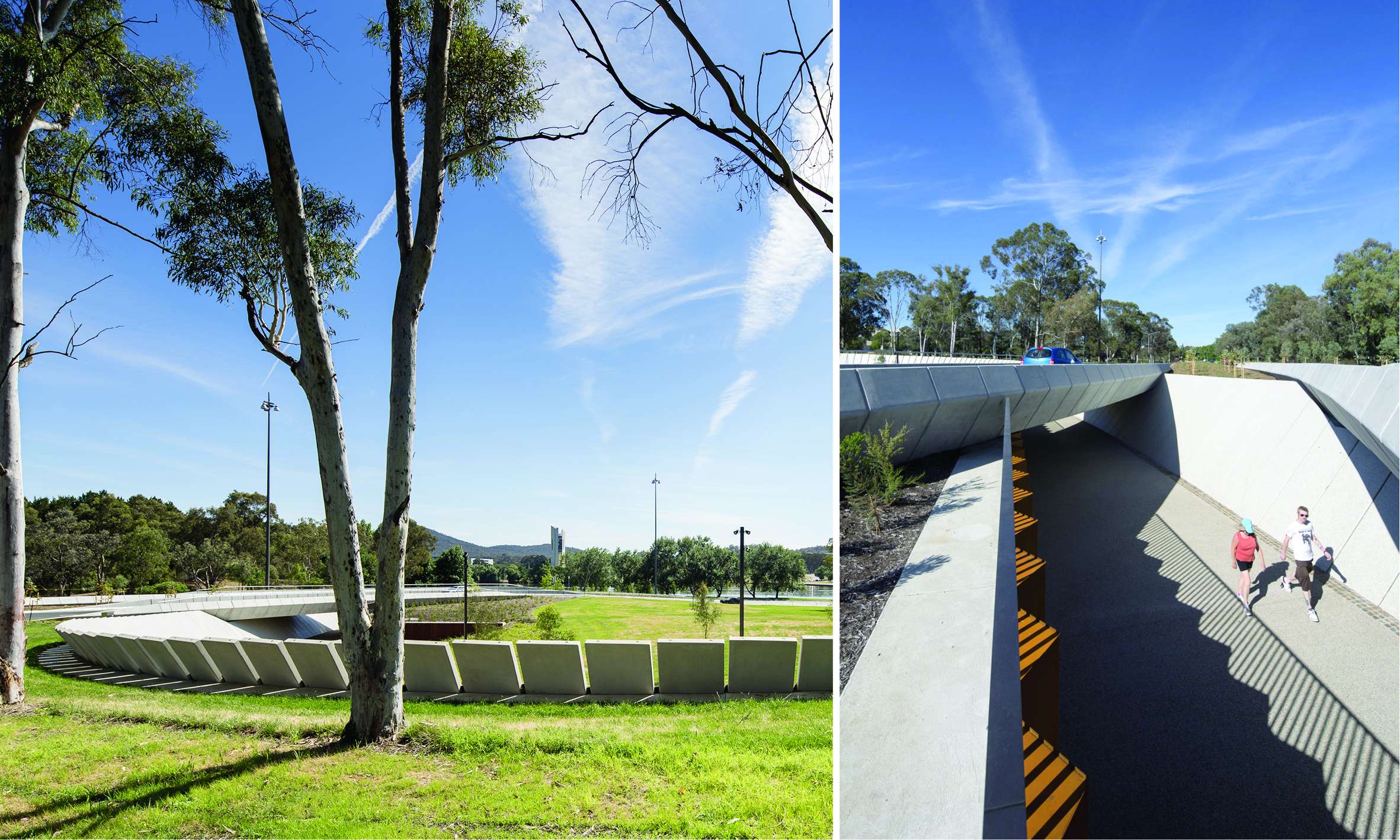 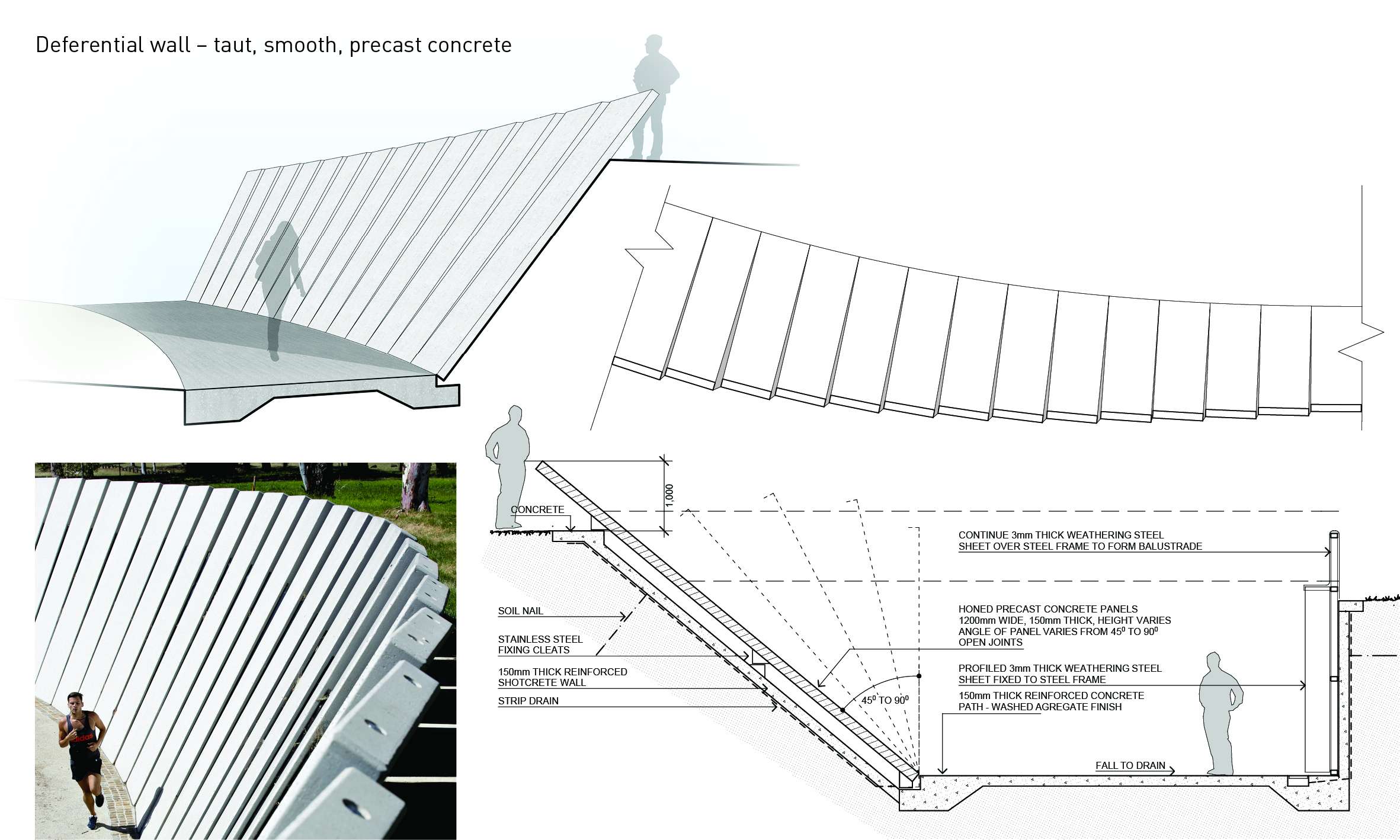 The Parliamentary Triangle is a place of the highest cultural and ceremonial significance in Canberra, Australia’s capital. Set out by Walter Burley Griffin, it contains the nation’s most important institutions, including Parliament House, the High Court and the National Gallery of Australia. Lake Burley Griffin bisects the Parliamentary Triangle to create a smaller symbolic triangle — the Parliamentary Zone — on its southern shore, with Parliament House at its apex. The lake’s scenic shores are lined with extensive parklands that are significant recreational spaces for Canberra – connecting people with landscape, government and culture.

Bowen Place Crossing is a new public space connection to the shore of Lake Burley Griffin within the Parliamentary Zone. Spackman Mossop Michaels, with Lahz Nimmo Architects, was awarded the project after winning an invited national design competition run by the National Capital Authority. The project brief sought to replace a dangerous at-grade crossing on busy Bowen Drive with a pedestrian and cyclist underpass.

Prominently located between the National Gallery and Kings Avenue (one of the Parliamentary Triangle’s axes), Bowen Place Crossing demonstrates how an integrated architectural and landscape architectural approach to infrastructure can produce a built outcome that is functional and poetic – creating an infrastructure that connects people physically to the lake, while also providing an immersive experiential connection to the highly significant cultural and heritage values of the place.

Recognising the significant opportunity for place-making within the Parliamentary Zone, our design strategy was to create a simple and elegant geometry that would slot seamlessly into the existing environs. A key challenge was how to sensitively integrate the substantial excavations required to create the grade-separated connection. Our response was fundamentally landscape driven – the new underpass is part of a continuous path that slices through the terrain on a trajectory that speaks to the existing geometries of Bowen Place and establishes new vistas across the lake to the National Carillon. The new insertion is deliberately minimal to allow the landscape setting to take precedence.

The path is contained by two wall types: the Deferential Wall – a taut, smooth, off-white precast concrete that deliberately defers to the existing palette of materials and tones within the Parliamentary Zone; and the Assertive Wall – composed of a deeply profiled weathering steel that naturally ages to a rust ochre and appears to be wrinkled and compressed as it follows the tighter inside line of the path. A new pair of sleek concrete bridges reconnect Bowen Drive over the new underpass space.

The purposefully restrained planting palette, distinguished primarily by white trees set against lush green carpets, explicitly references the modernist civic landscapes of the Parliamentary Zone. A large rain garden filters stormwater from the project before it enters the lake, while extensive plantings of locally native species enhance the ecological values of the place.

From the beginning, we recognised that fundamental to the project’s success would be how well it functions as a connective infrastructure. This drove us to rethink the conventional underpass to create a generous, light filled space that would encourage confident usage both day and night. A core principle for the project was inclusivity – all paths are designed with fully accessible grades and are generously wide to function as shared paths that accommodate all users.

The much-needed final link in the Lake Burley Griffin Loop, Bowen Place Crossing has received uniformly positive responses from the client, the press and most importantly – the public. By taking a fundamentally landscape-driven design approach, the project successfully demonstrates how a seemingly prosaic program can be transcended to create a new civic landscape infrastructure.