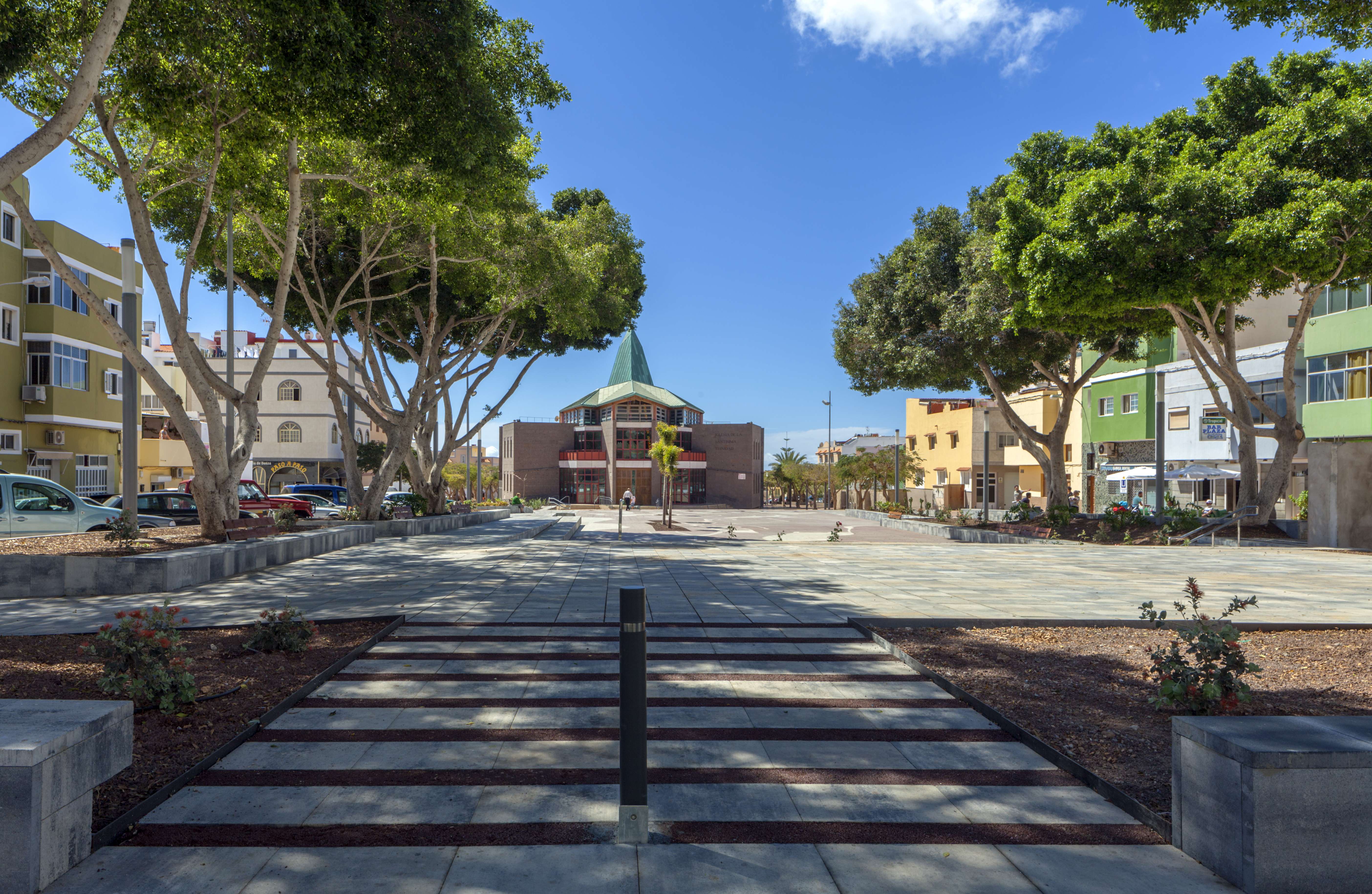 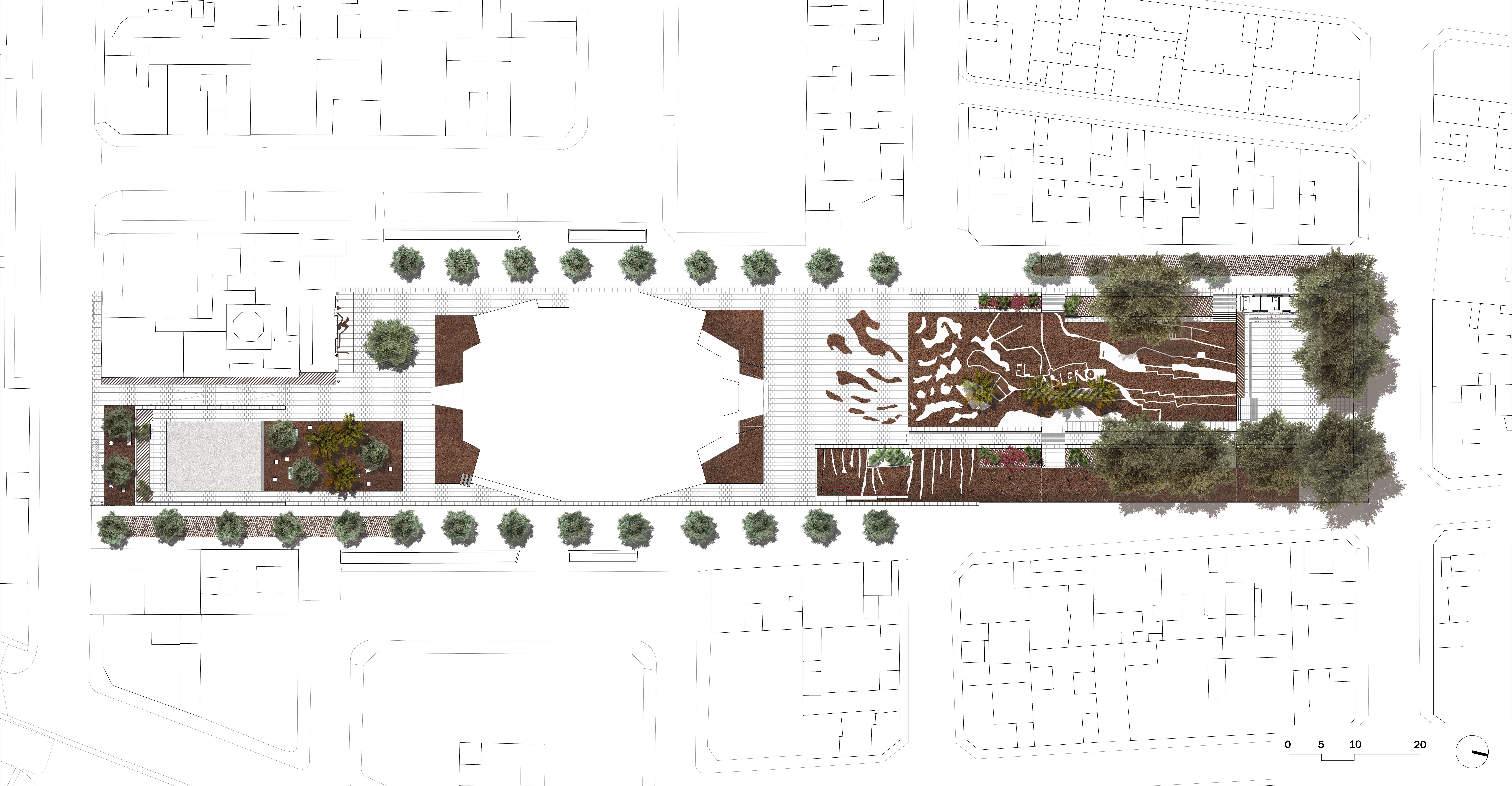 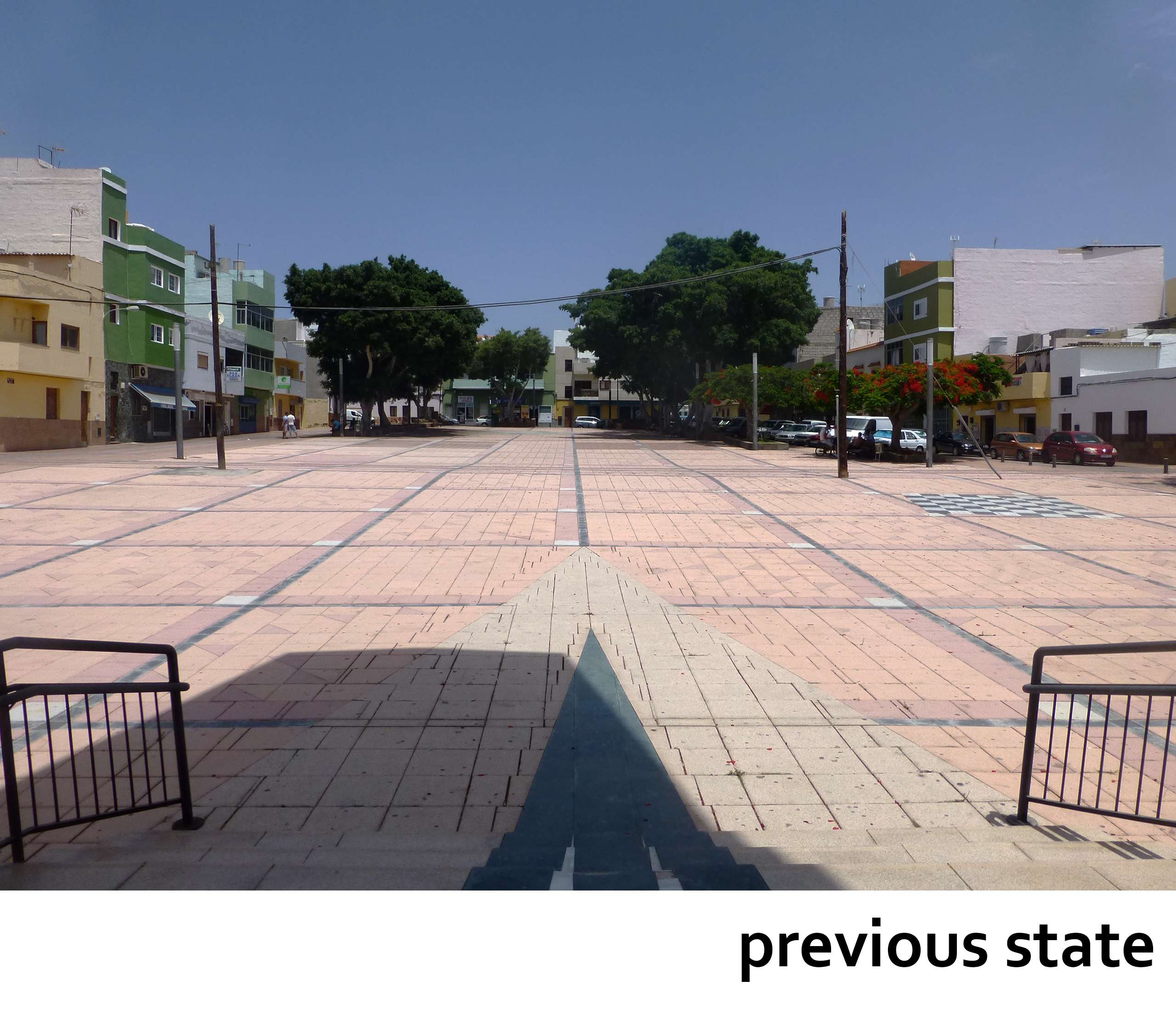 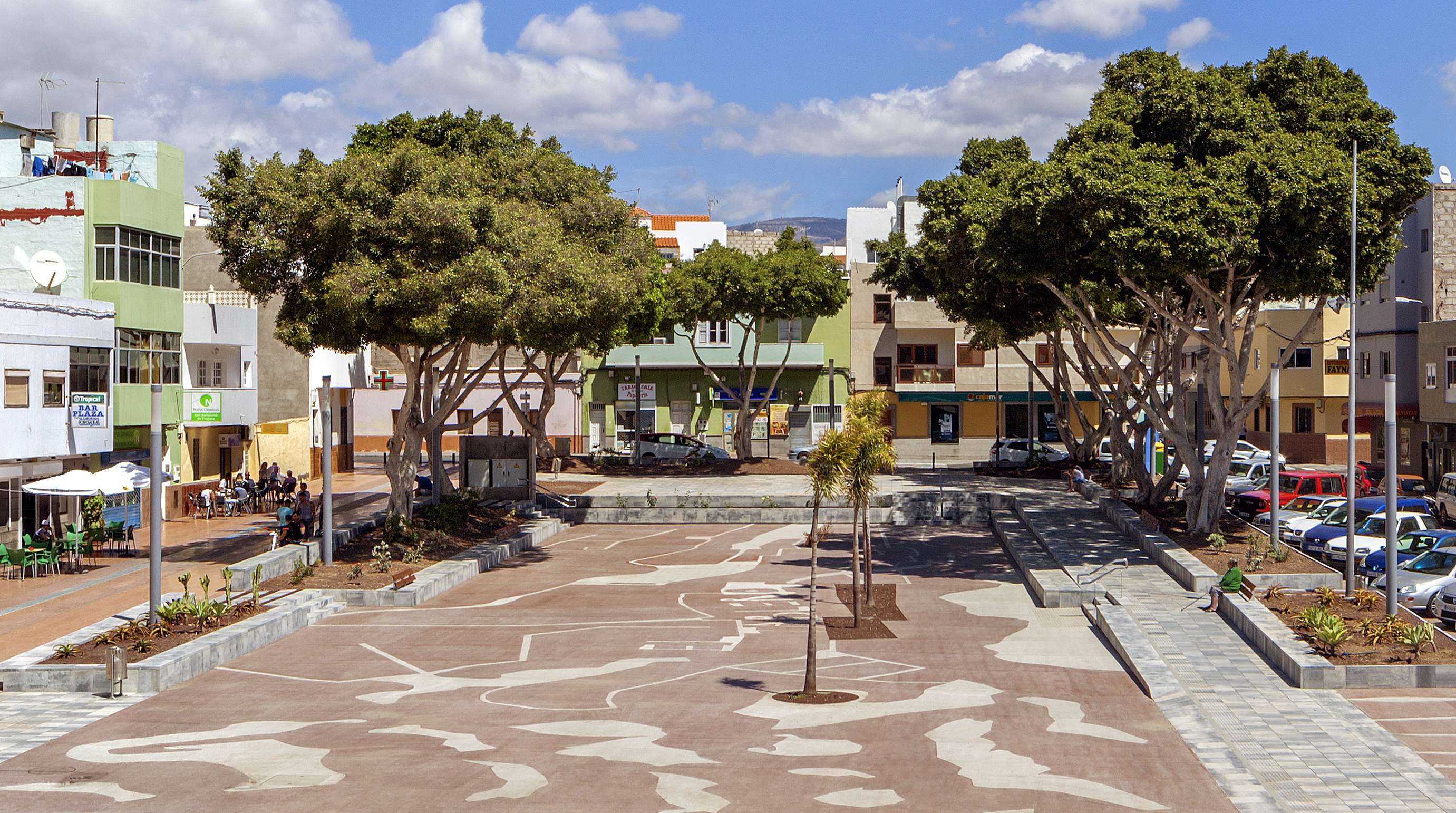 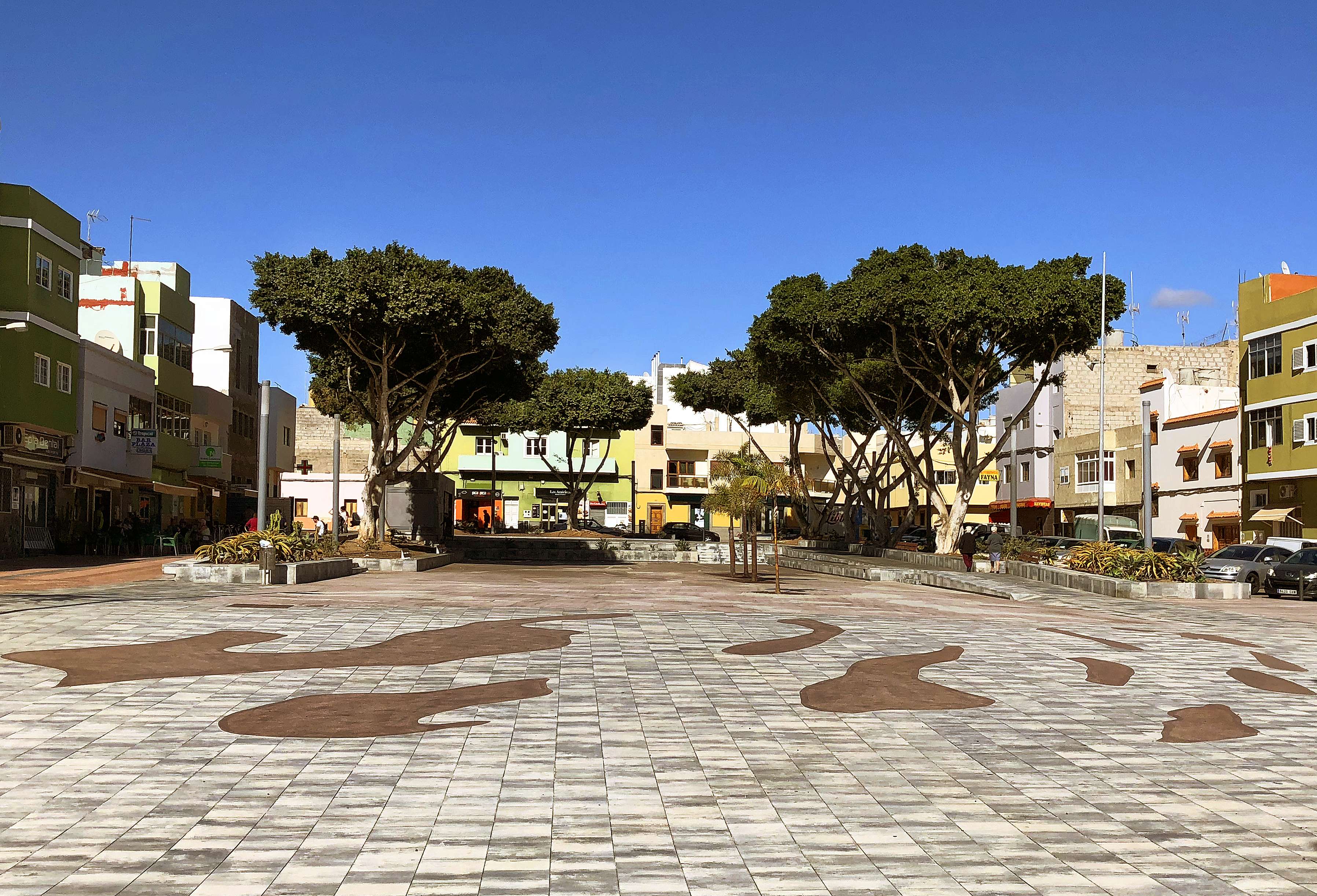 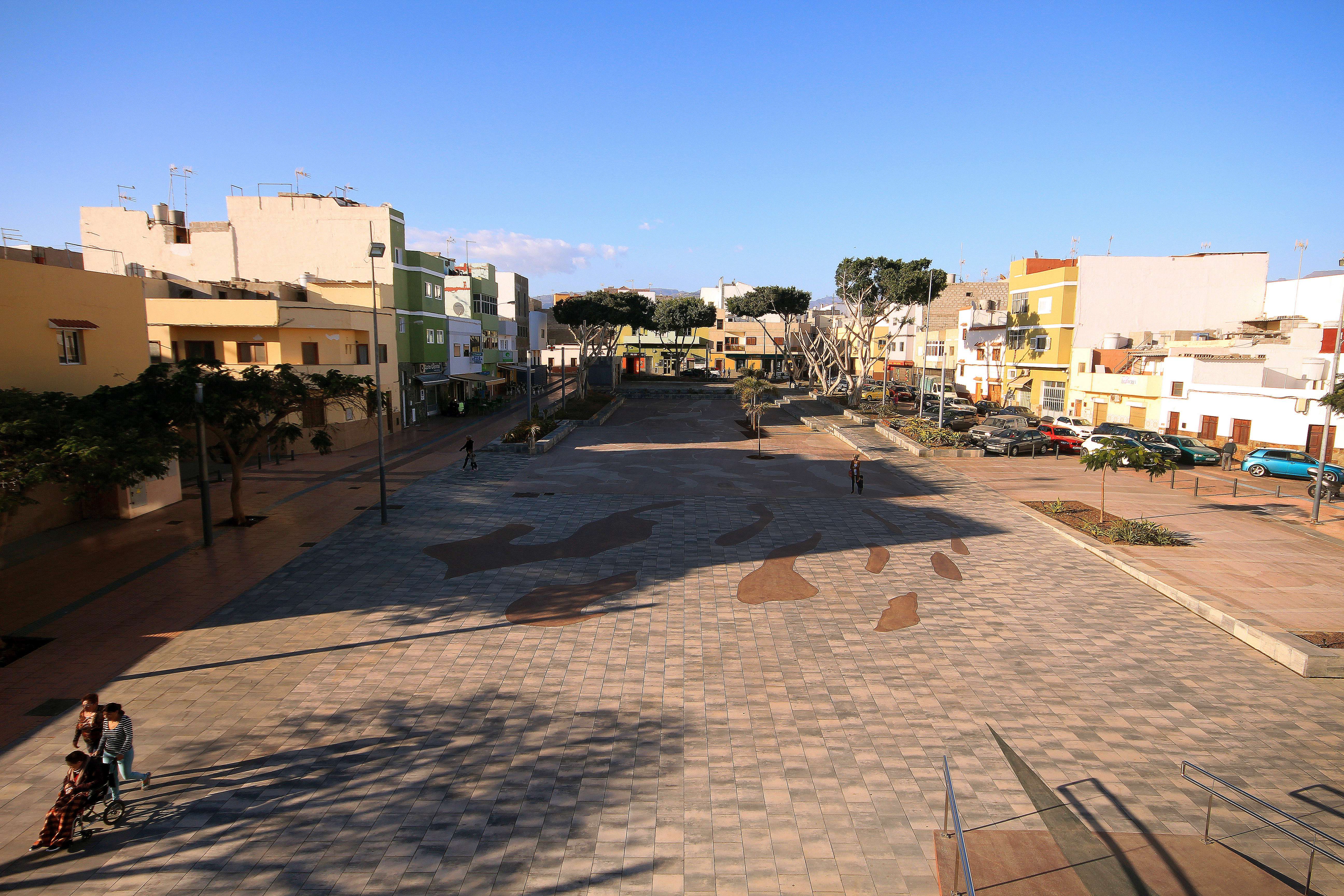 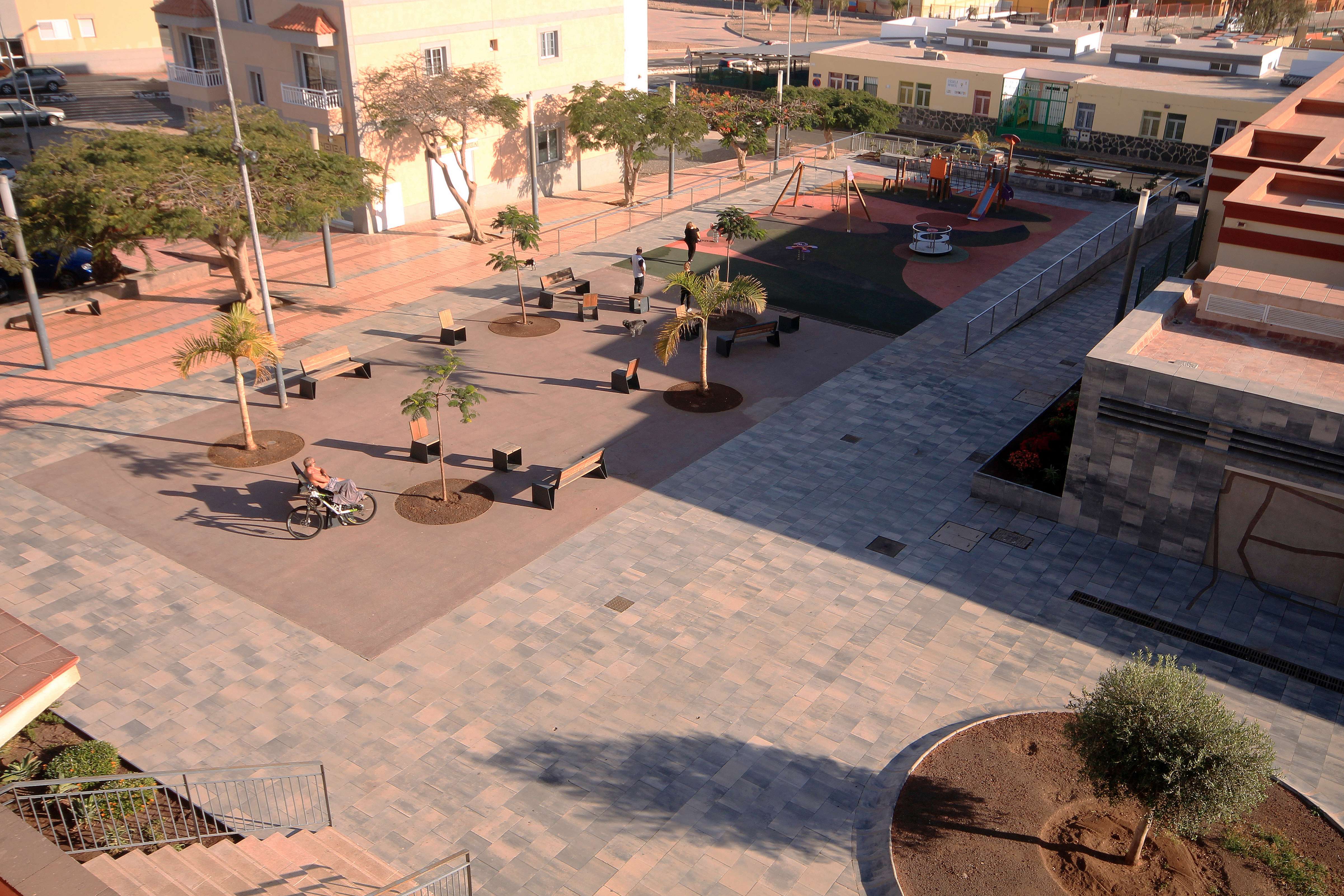 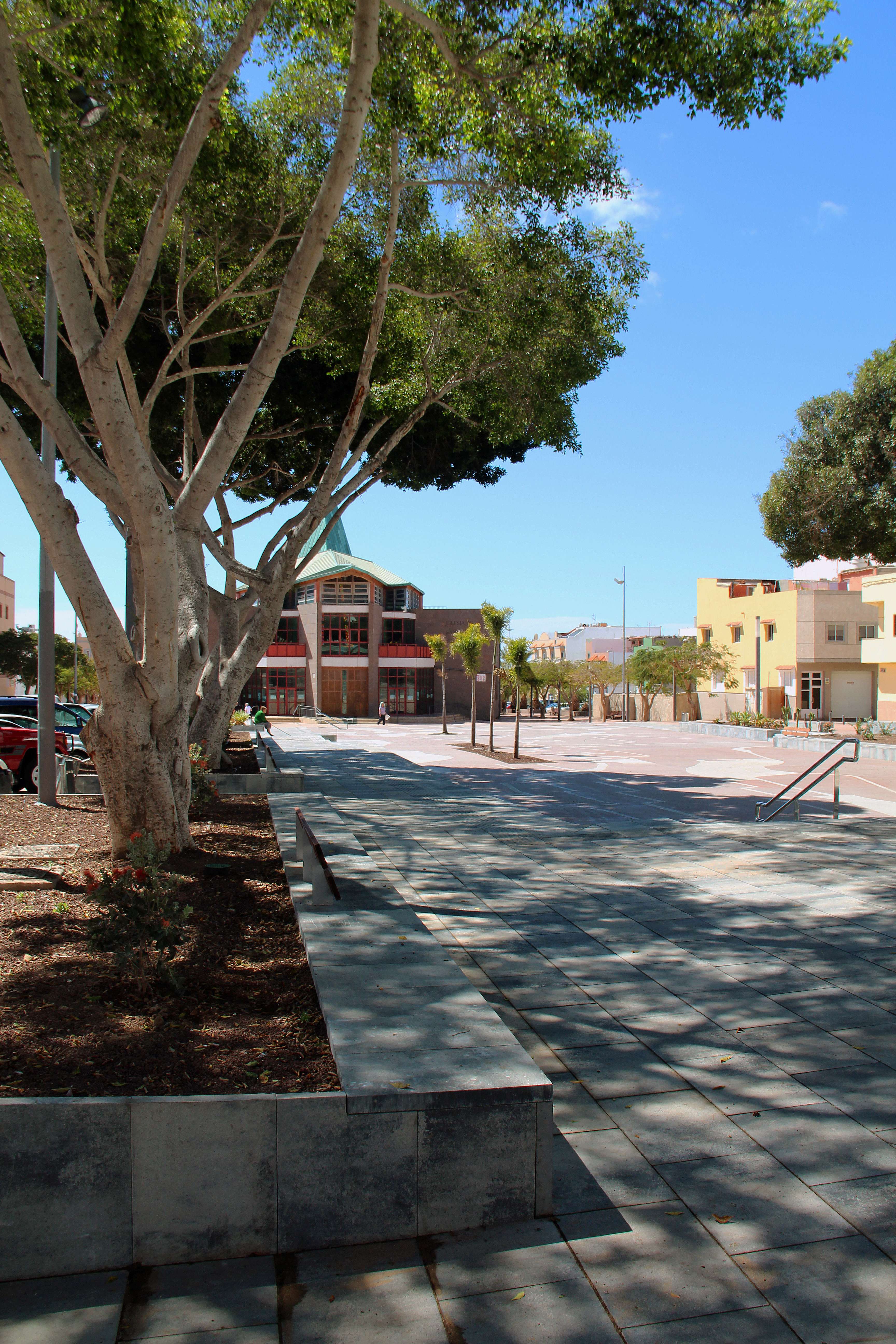 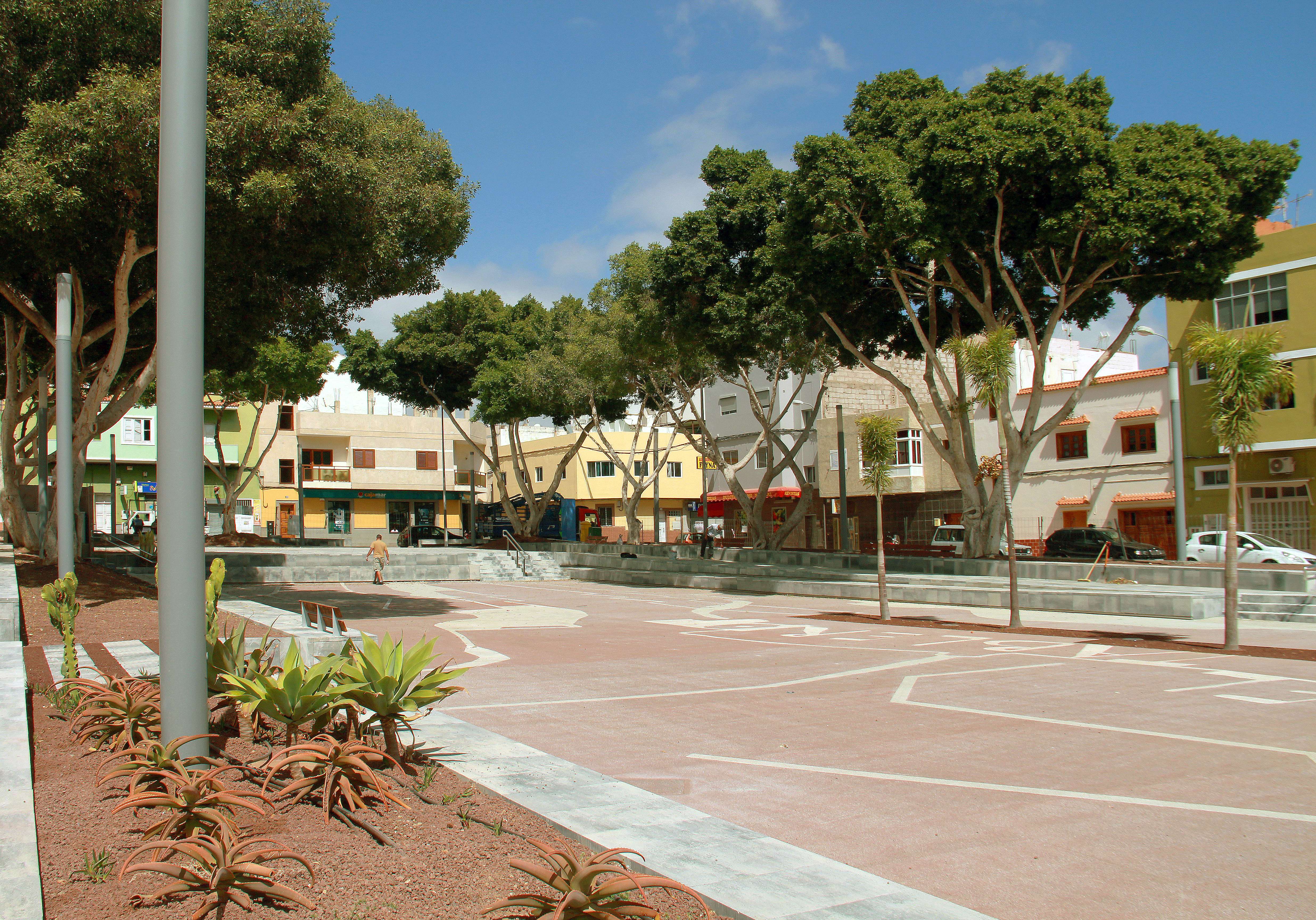 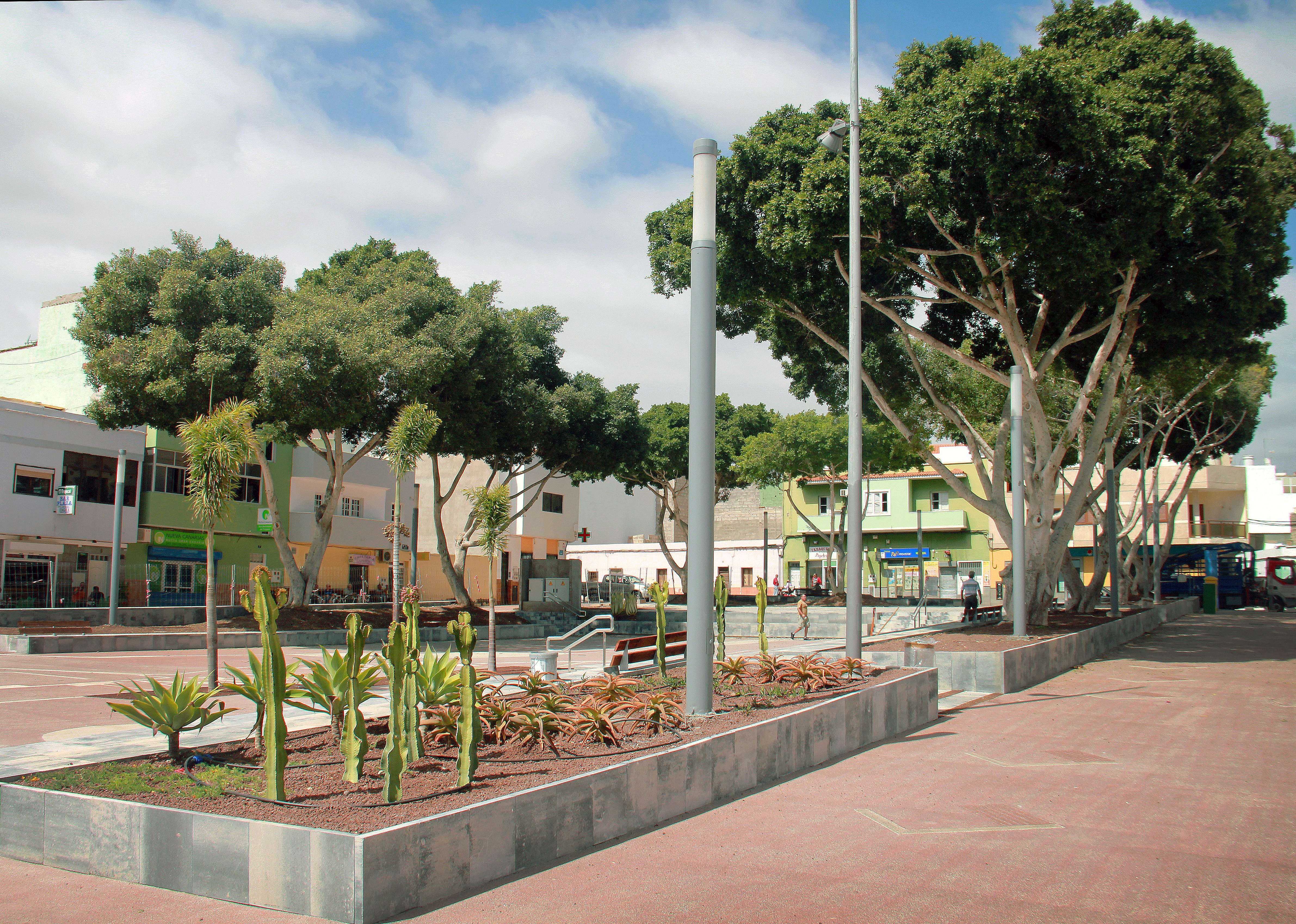 The design concerns the renewal of the central square of El Tablero, an urban settlement which is part of the Municipality of San Bartolomé de Tirajana, located in Southern Gran Canaria (Spain). El Tablero originated as a small agricultural center but by the ‘60s, with the advent of massive tourism, it expanded considerably, becoming a sort of dormitory town for those working in the nearby resorts of Maspalomas. Today El Tablero represents a junction between the rural inland, where traditions and popular festivals are still alive, and the seaside packed with tourists in every season.

The tomato monoculture, prevailing in the area, left its marks on the bald local landscape, drawing long lines made of terraces, dry stone walls, canals and furrows. On the other hand the coast is dominated by huge sandy dunes which shape the most unique landscape of the island, a semi-arid environment punctuated by xerophilous and halophilous plants. Hence the project aims at fitting between these two worlds, becoming a symbolic hinge. Over the years the square, despite being the major public space in town, turned into a secluded area, sometimes affected by episodes of social hardship.

Objective of the proposal

The renovation of the square was promoted by the local Municipality, which wholly funded the construction works with a budget of 774,850 €. The area is about 6.640 m² and the intervention was carried out in two phases, in 2016 and 2017. The program of needs and the aims of intervention have been defined by the municipal services following a series of debates and meetings with local community representatives and members of the associations interested in using the square for public happenings. The main requests were:

- Conferring the place a specific identity, in order to convert it into the symbolic heart of the town;

- Reducing the slope of the area facing the church, which stands at the center of the square, making the space more suitable for festivals, parties, events and fairs;

- Creating an appropriate location for outdoor performances, provided with a small service building;

- Renewing the children's play area located at the rear of the church.

Description of the project

The design complies the program by means of a simple and measured morphology, in order to provide a flexible space. By modifying the previous differences in level, all the area in front of the church is reshaped in two main portions:

1. The first being the "frame", paved with gray concrete slabs which mark the whole perimeter. The central area is excavated to reduce the slope and the whole edge along three sides is deconstructed and redesigned with steps, which define both the stage and long linear seats, shaded by the existing trees and backlit by LED strips.

2. The second being the large central "playground" for events, paved with resin bound aggregates evoking the inland colors and outlining a playful graphic, which is intended to abstract the local landscape features: the broken lines typical of the countryside terraces shift into the soft geometry of the dunes, passing through the lettering of "El Tablero".

The rear of the church encompasses a children’s play area and it has been renewed by adding trees and repaving with the same materials used in rest of the square. As for vegetation, all the existing trees are maintained and some palm trees and acacias are added.

Since the inauguration the square, formerly a desolate and unattractive place, turned into a popular gathering place, highly attended by local residents. This re-appropriation of space also increased the general perception of safety. Many locals report that the episodes of vandalism and degradation seem to have decreased.

Residents are generally very satisfied with the renovation, with some isolated blame for the "somewhat too modern layout" of the resin flooring. A layout that, as a matter of fact, allowed to convert the central area in a real spontaneous playground often crowed with children, who can safely play under the gaze of their parents and grandparents seated along the perimeter benches. In addition to that, the schedule of festivals, fairs, cultural activities, concerts and religious representations is now very busy in every season.

The renovation was carried out without any particular problem, in compliance with the budget. Materials and furnishings require a very limited maintenance. New planters contain low water consumption shrubs, succulents and herbaceous species chosen among the native flora.