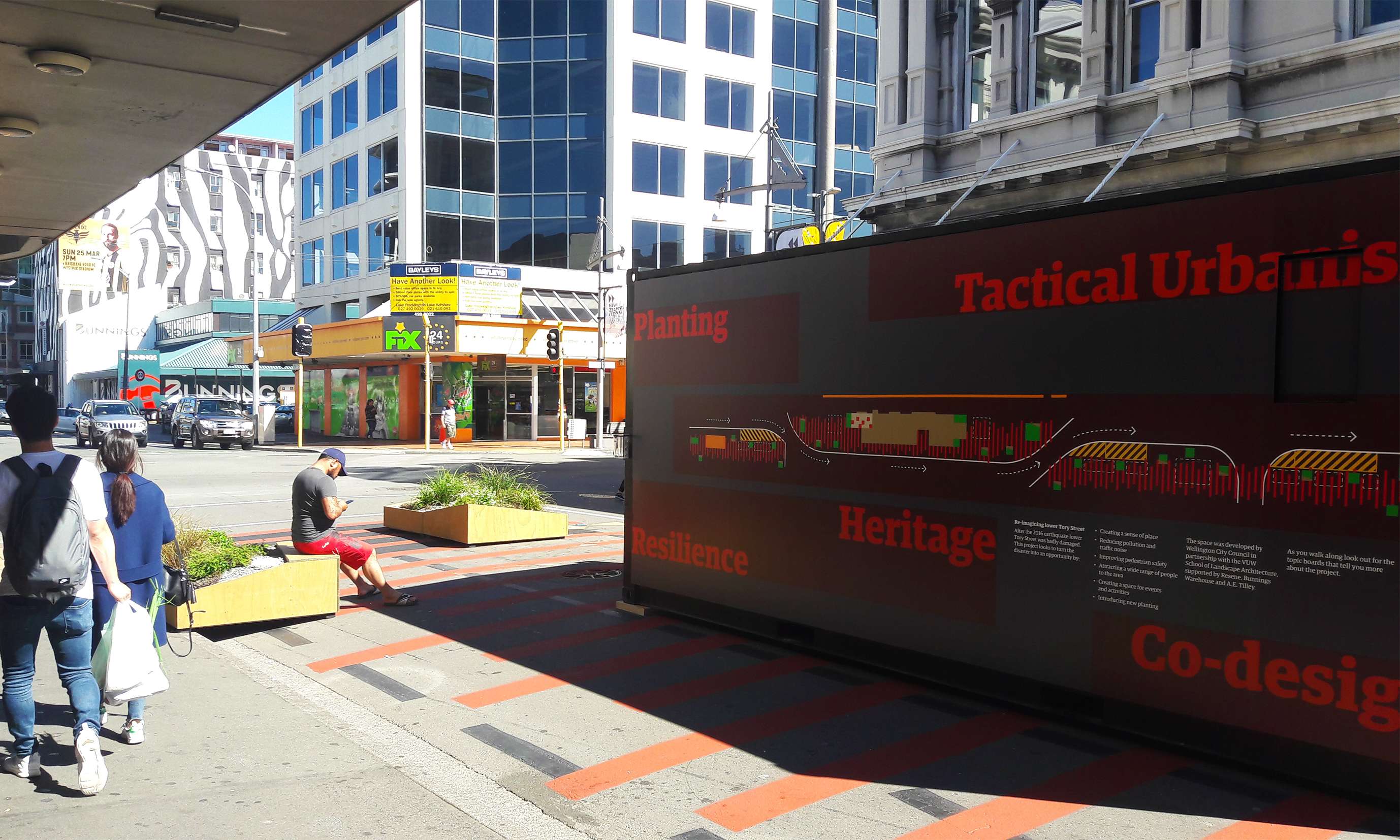 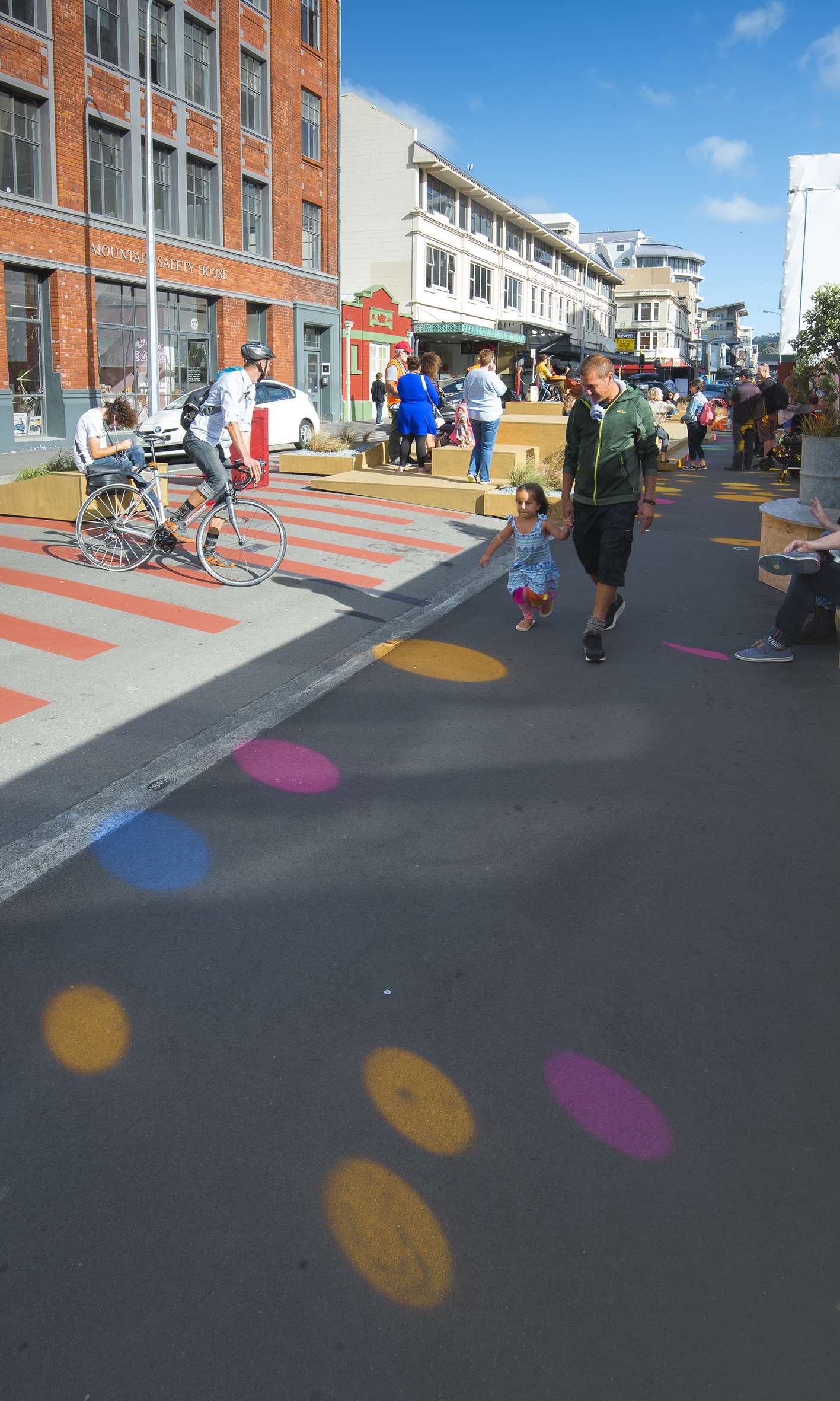 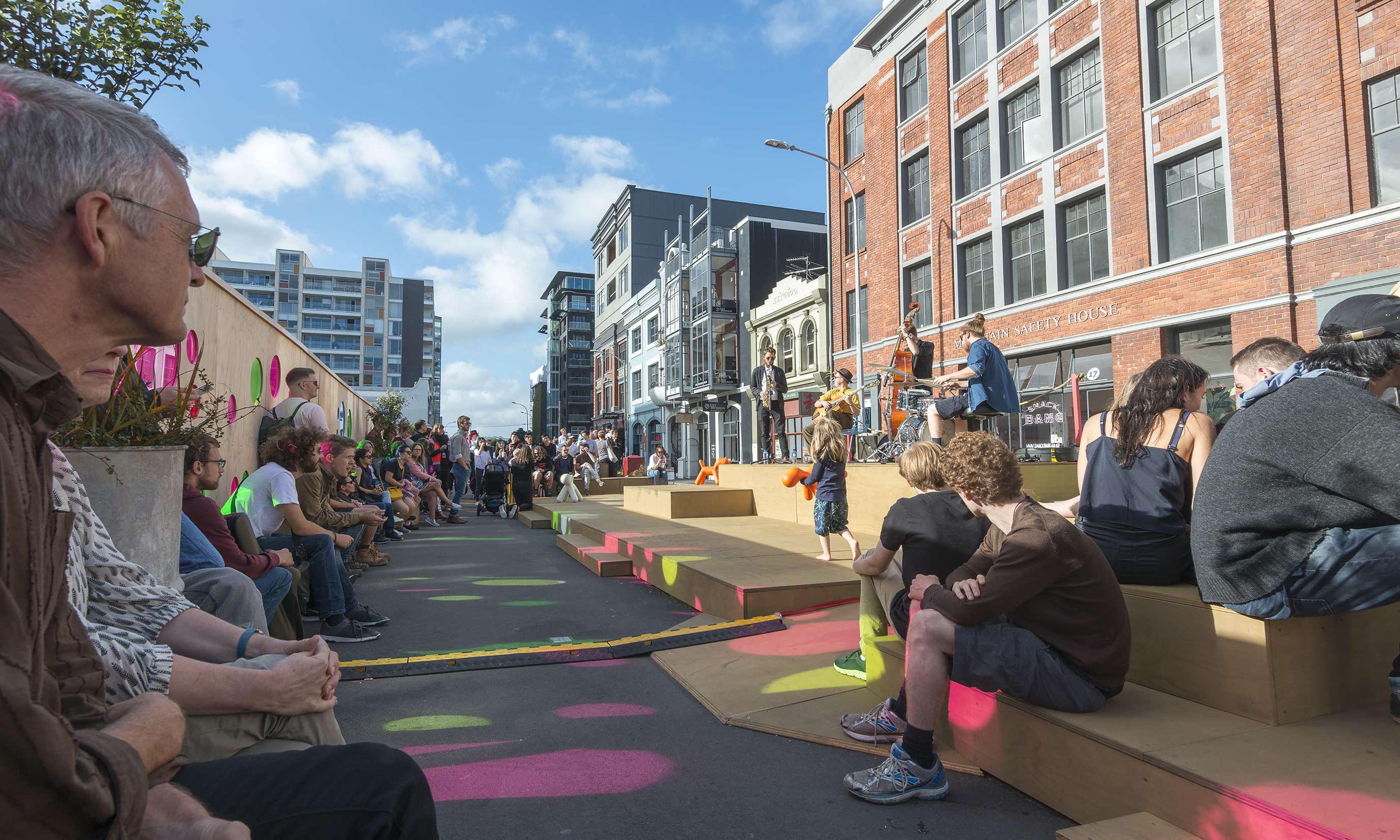 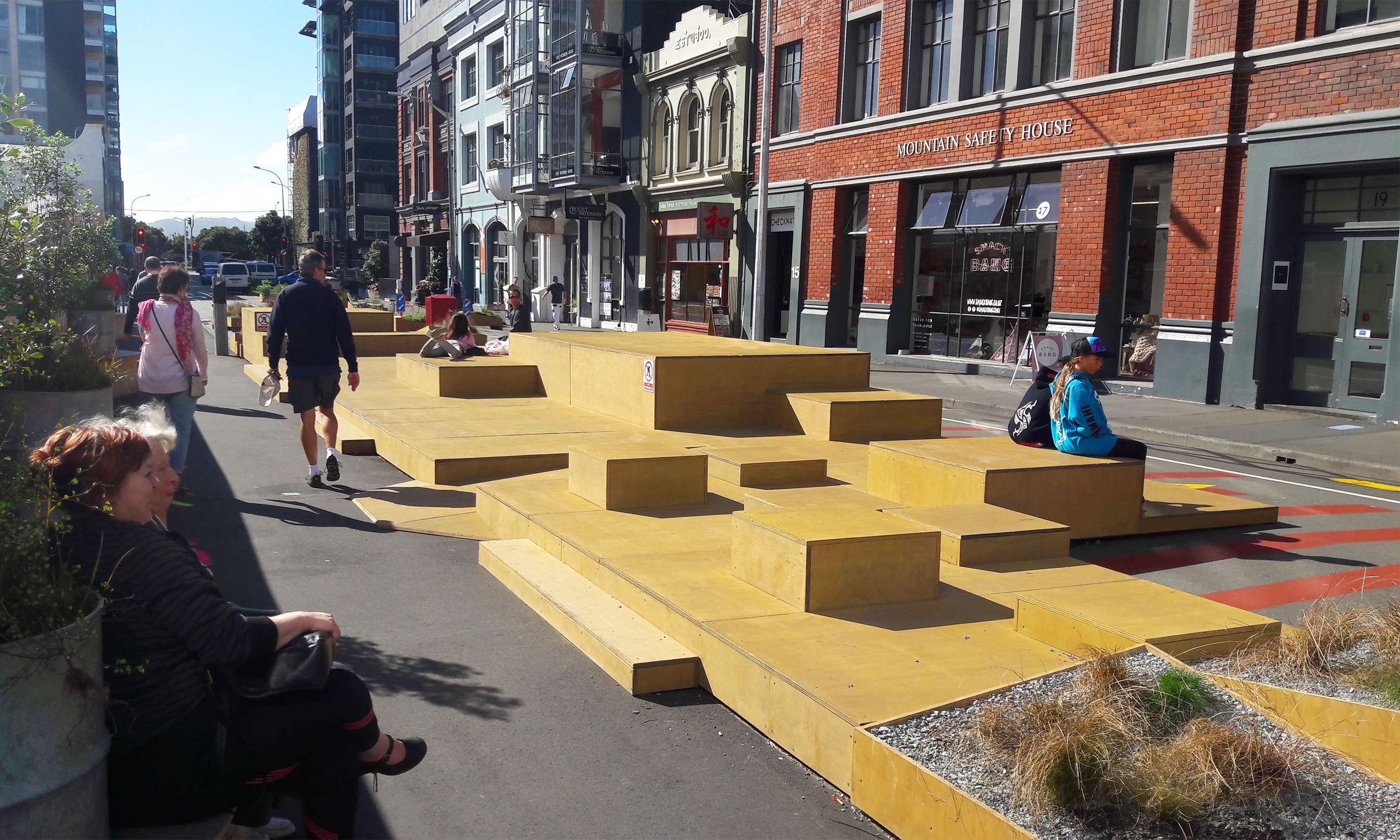 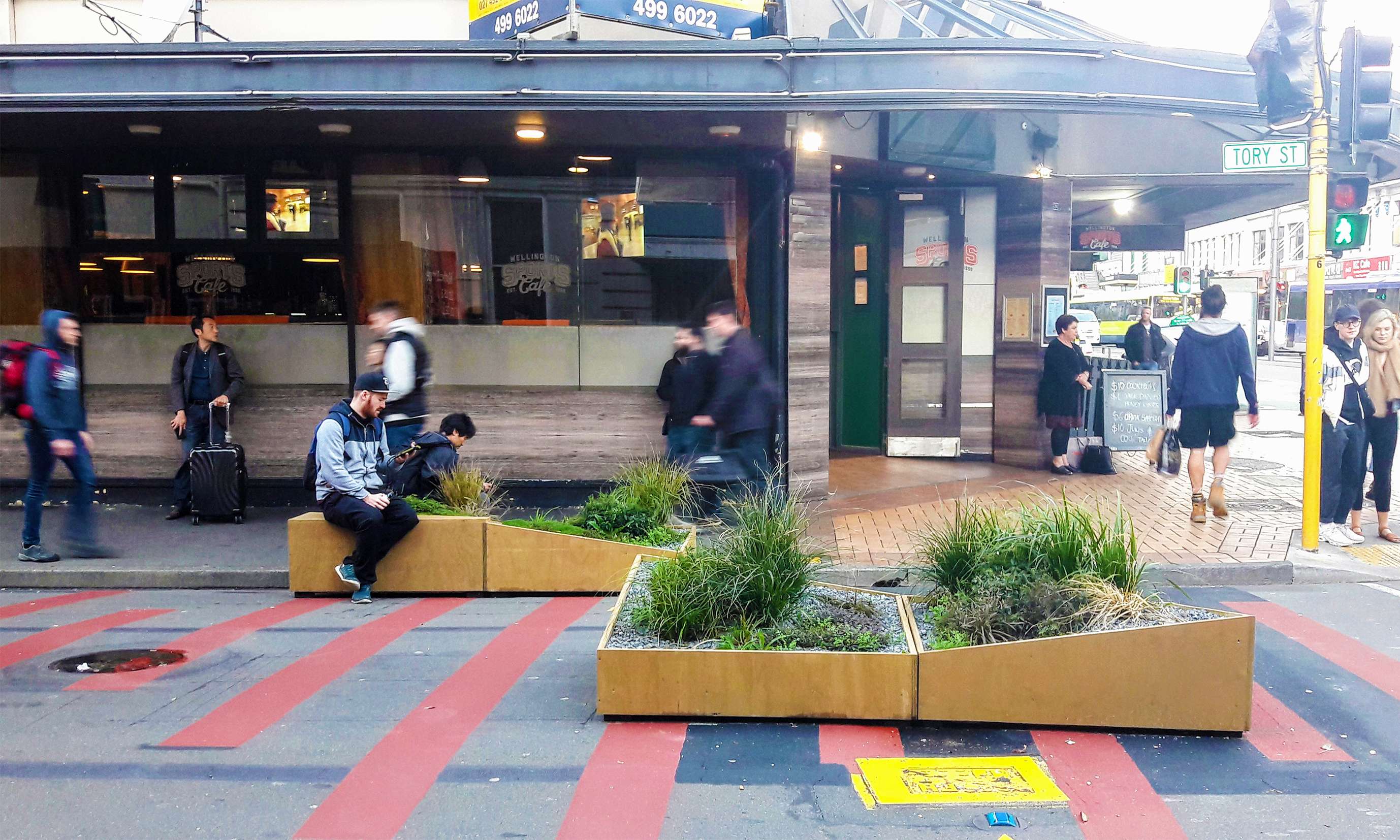 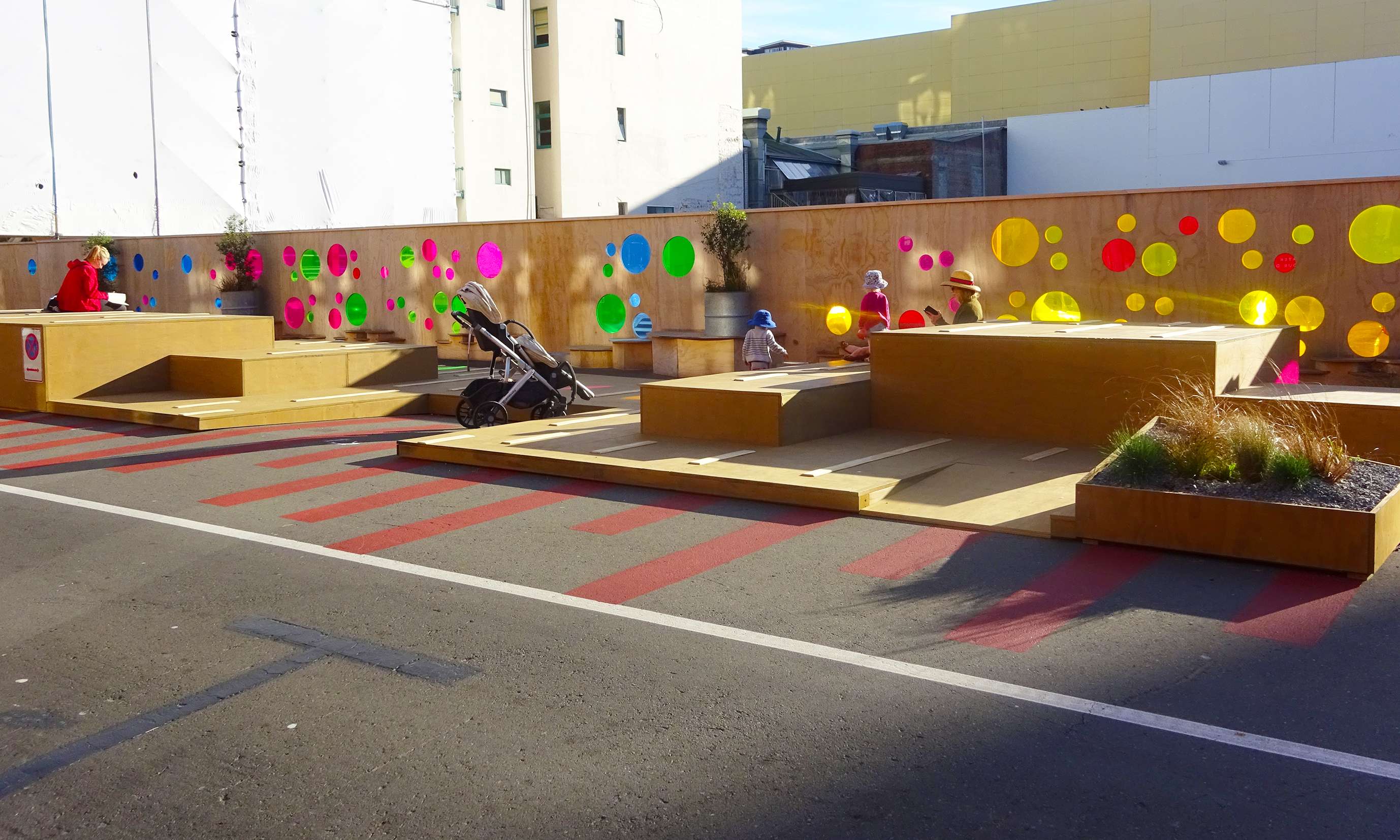 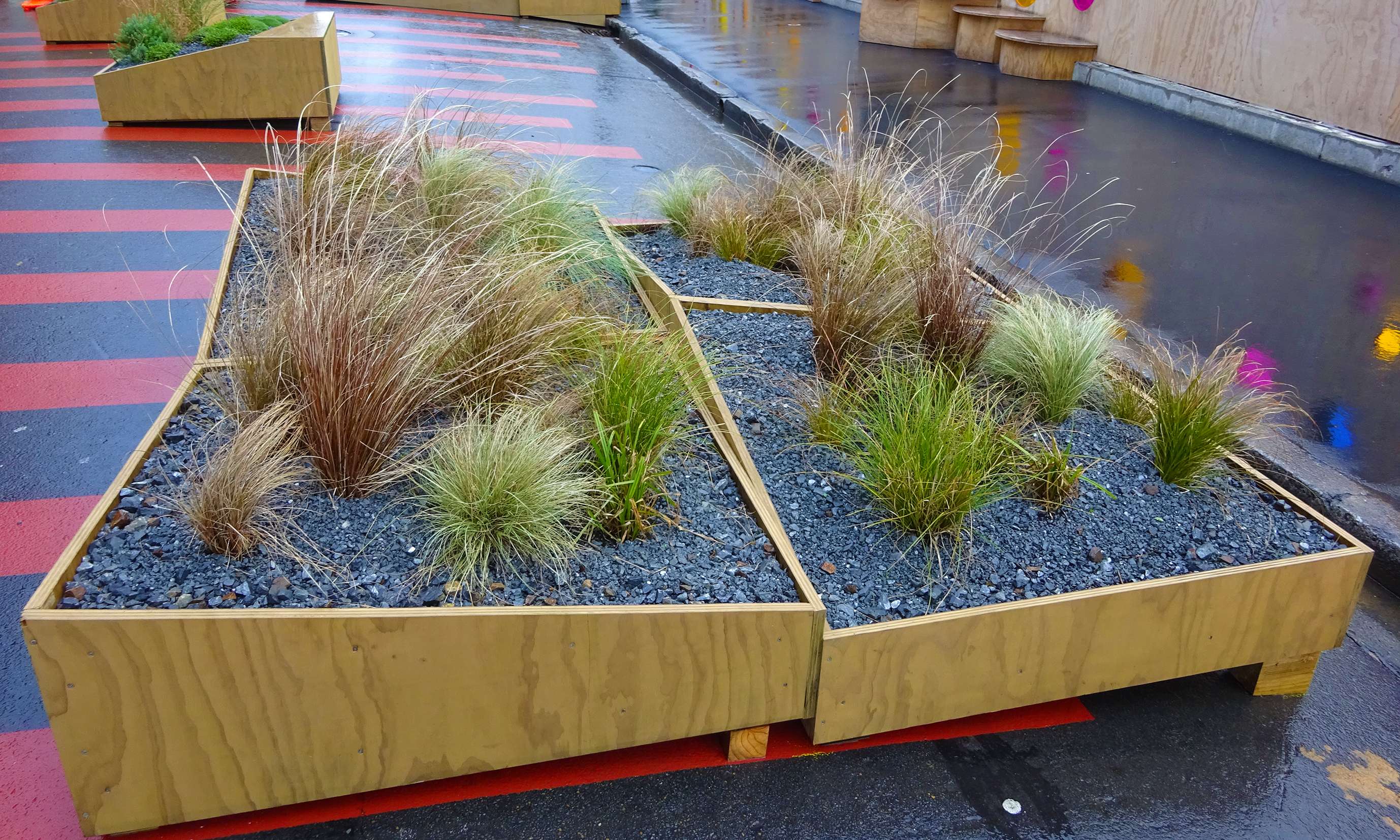 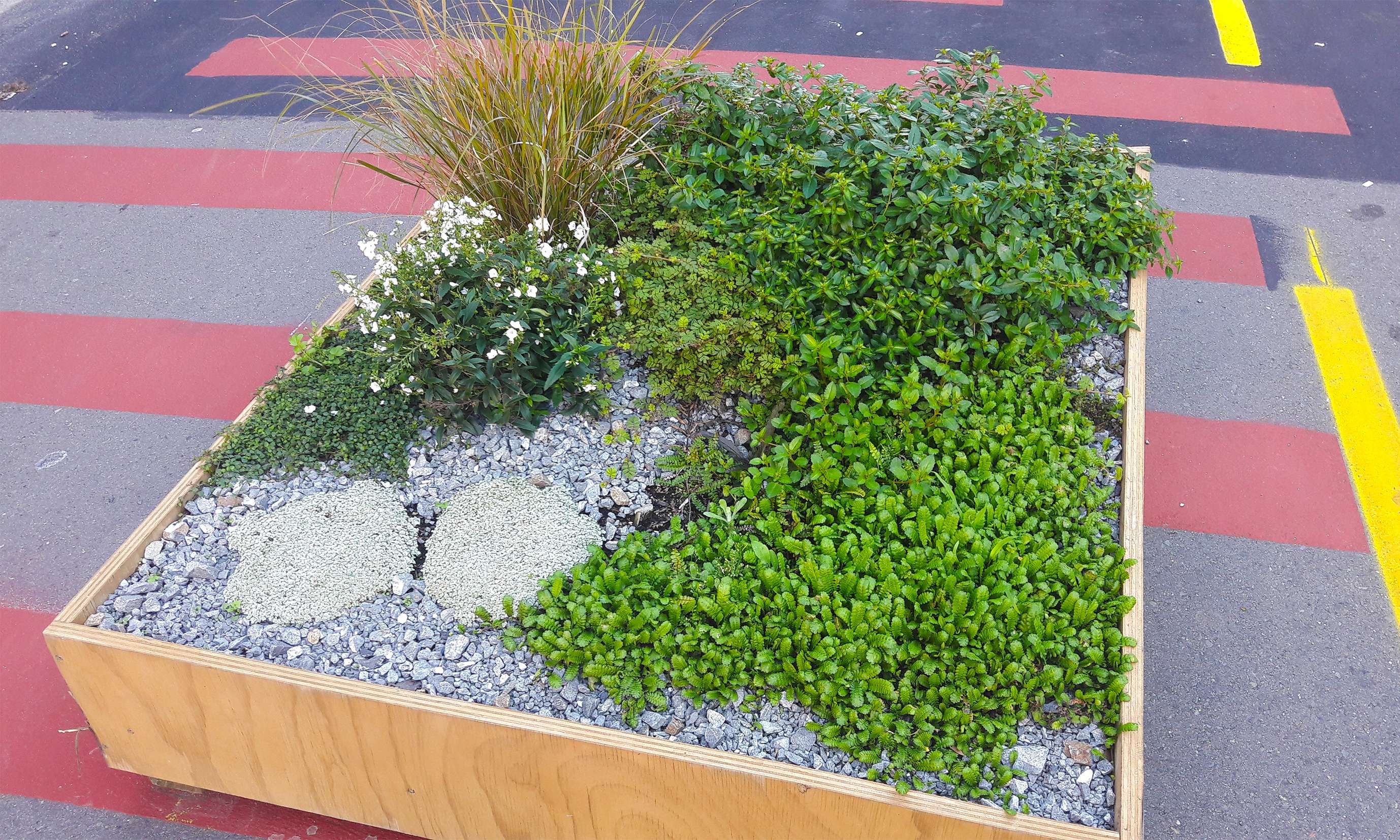 Re-imagine Tory street: the project as a process

This project is the result of a partnership between The School of Architecture – Victoria University of Wellington and Wellington City Council. WCC proposed to develop an interim street design project on lower Tory street, where several buildings were affected by 2016 Kaikoura earthquake.

Tory street is a strategic axis of Te Aro that has an elevated socioeconomic activity and the potential of becoming pedestrian-dominant in the nearby future. Following principles of tactical urbanism, the project aimed to utilise the expertise of landscape architecture staff and students to run a participatory project, engaging with the local community and wider public. WCC wanted to use the temporary intervention to engage with the community more broadly on the future of Tory Street and the future of the central city as a whole.

The LAND321-landscape architecture construction course was used for developing practice-based research at the university. Following participatory design and action research methodologies, the design process was considered to be an evolution of previous partnerships developed by the landscape programme of SoA-VUW. From 2014 to 2017, the university partnered with different communities and municipalities, fostering civic engagement while developing design-based partnerships.

WCC was aiming to promote and experience new ways of decision making using the expertise of SoA-VUW. The designs were generated by the university following participatory processes and implemented by WCC. Therefore, the project facilitated social capital developed between the community, local government and a tertiary institution.

The process started through different workshops with the local community as well as the wider public. Following these workshops, eleven teams of students developed concept designs that were presented to the public and exhibited. The public voted for their favourite proposal. The winning proposal was developed by a team of seven students, coordinated by the teaching staff and supervised by WCC officers. The design was implemented by the council with assistance from the university.

The design prioritizes pedestrian space, reducing traffic flow to a one-way lane and removing onsite parking except for three loading zones. The driving lane draws a chicane for reducing speed while creating three different areas for pedestrians. The central area, attached to an existing fence which limits a demolished building, was conceived of as a flexible space to attract a wide range of users and activities. The two areas placed in contact to the crossing streets, which have high pedestrian traffic, were focused on hospitality and recreation.

Red paint stripes and timber planters (with or without incorporated seating) were displayed throughout the street, providing continuity to the project. The platforms of the central area and the planters were built using sustainable materials related to NZ timber industry with the idea that they would be able to be reutilized in future projects.

The planting was thought of as an opportunity for education, inspiring the public to look upon NZ native flora in a new light. Many of the selected plants are rare, threatened and endangered species. The planting design was conceived of as an abstraction of NZ landscapes, symbolizing a journey from inland to coast. The planters, rethought of as micro-landscapes, included low-lying plants that are low maintenance and adapted to dry and windy environments.

This temporary project was an excellent opportunity to bring a collaborative process to life. This process involved many actors that developed many different roles, from community, university and local government; to sponsors, which collaborated through facilitating implementation. The implemented project was a success and proved the value of temporary interventions as useful tools for testing new ideas and a phased approach to change. At the same time, the project demonstrated adaptability during its lifespan; it adapted to problems that cropped up and addressed concerns from the local community. The project was dismantled by mid 2018 and most of its components were reutilized in other projects.

As a consequence of understanding the project as a process, research was developed around the participatory process, plant phenology and the impact of the temporary project in terms of public use. The partnership between LAND321-SoA-VUW and WCC was a valuable experience because it turned into a reality new ways of rethinking urban environments. It explored new processes of change through collaboration, where participation and education become key factors.