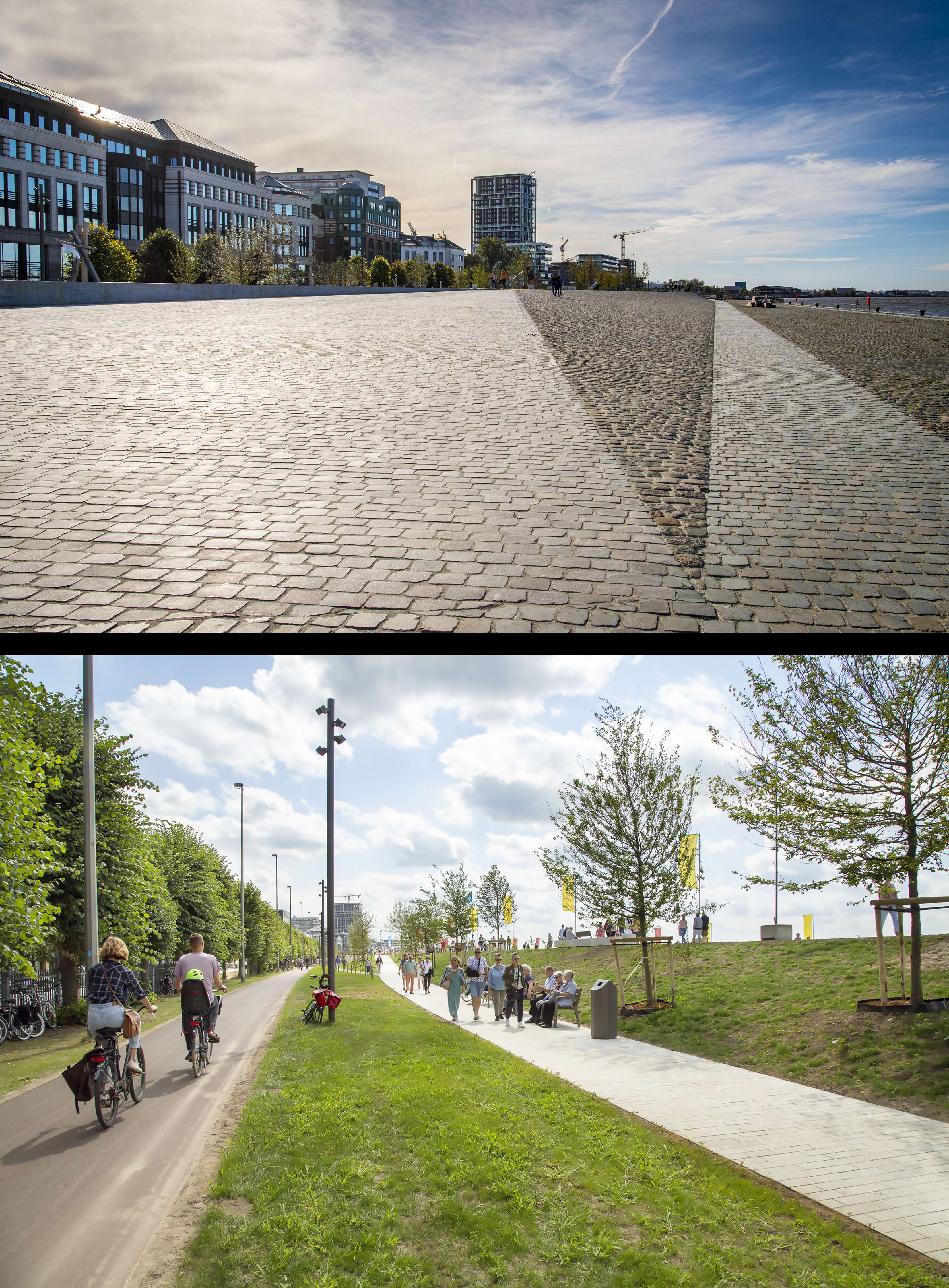 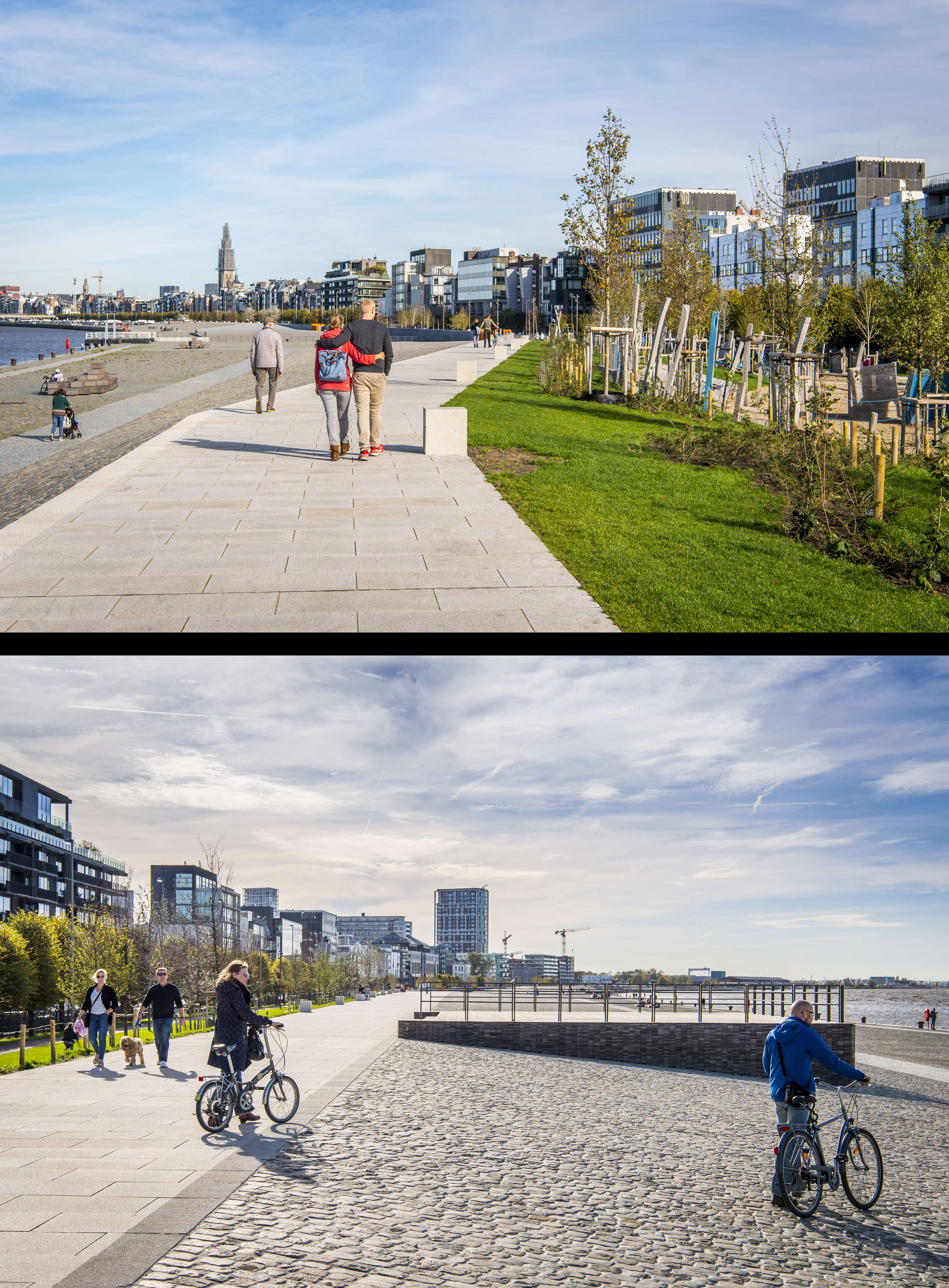 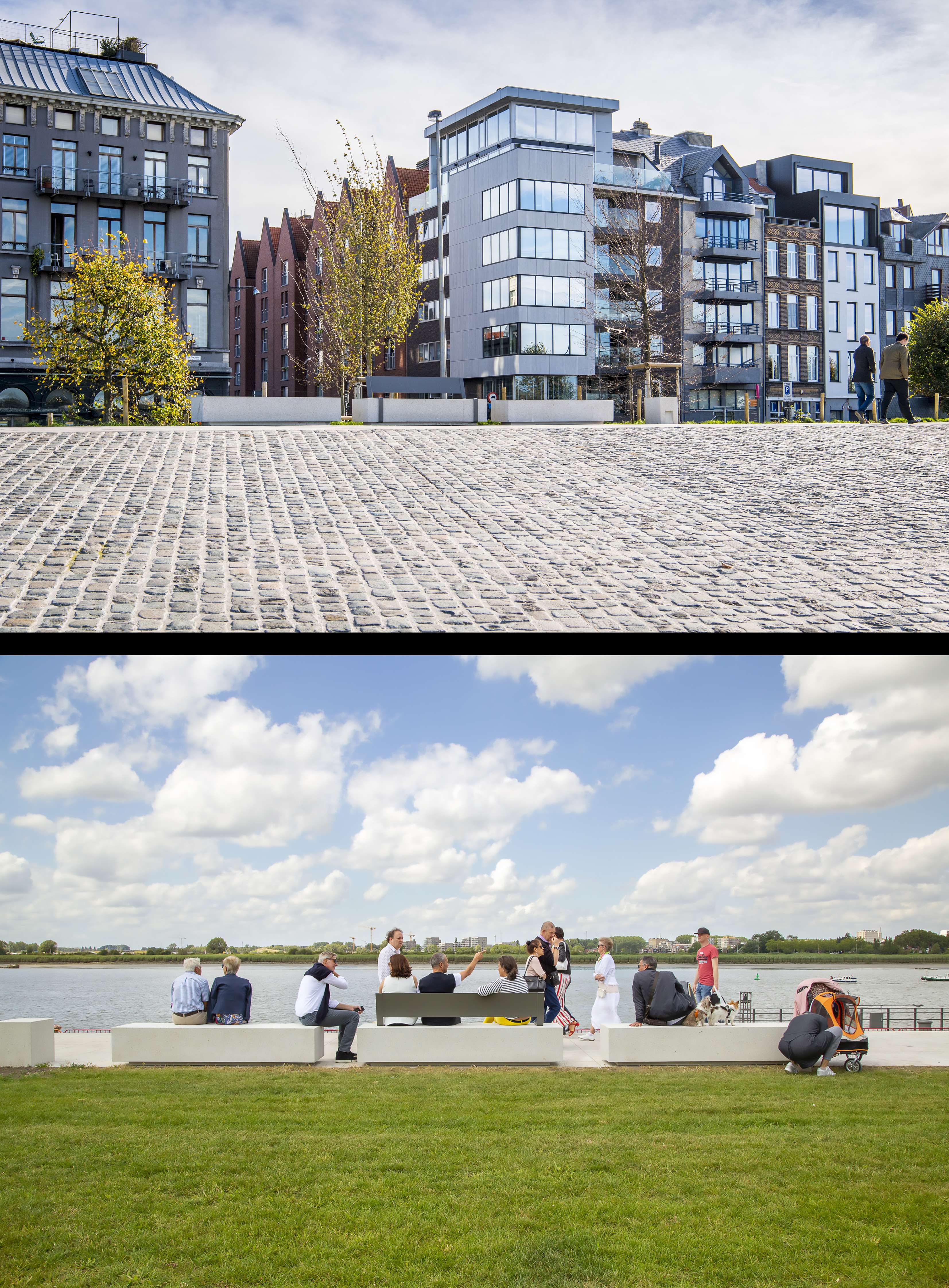 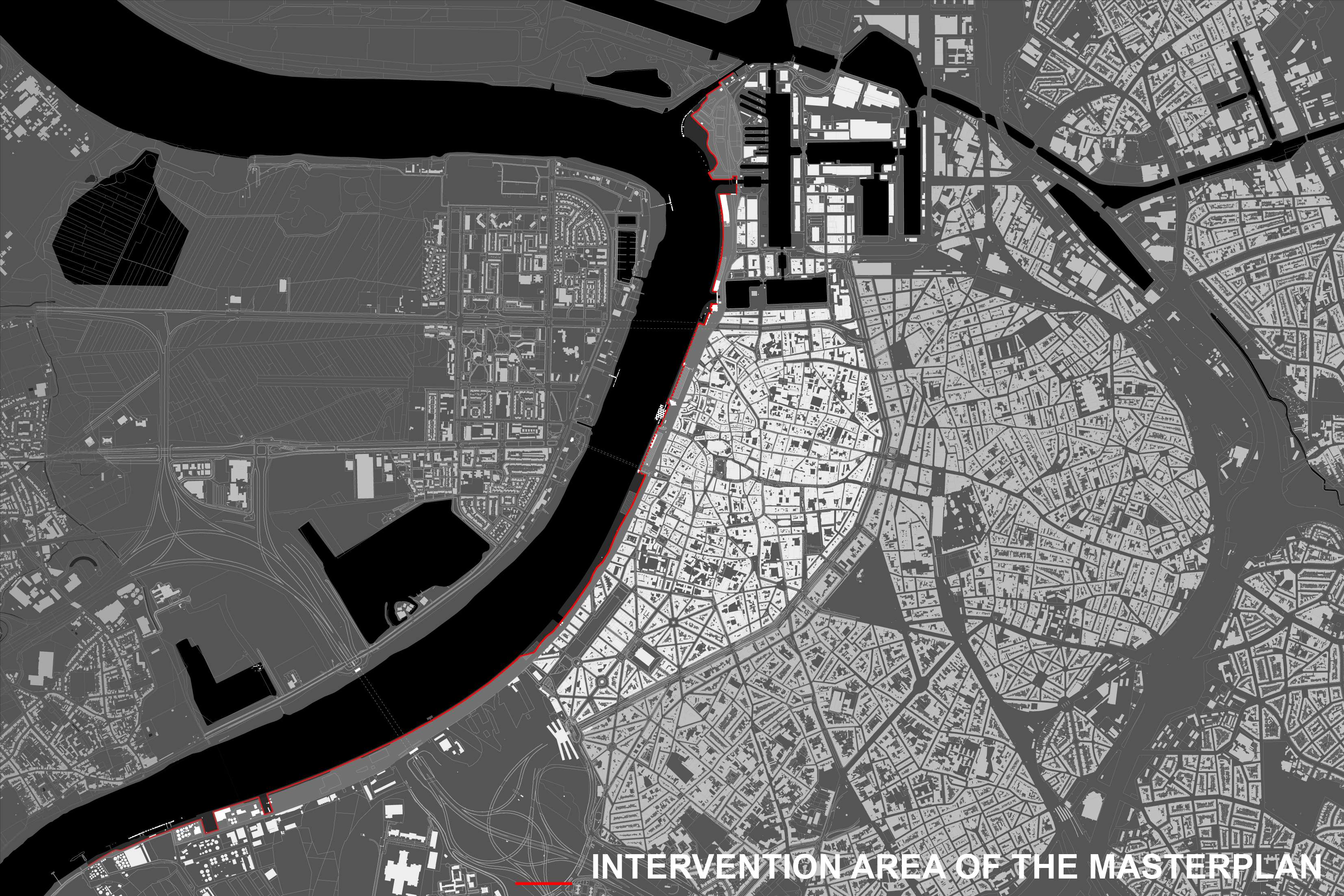 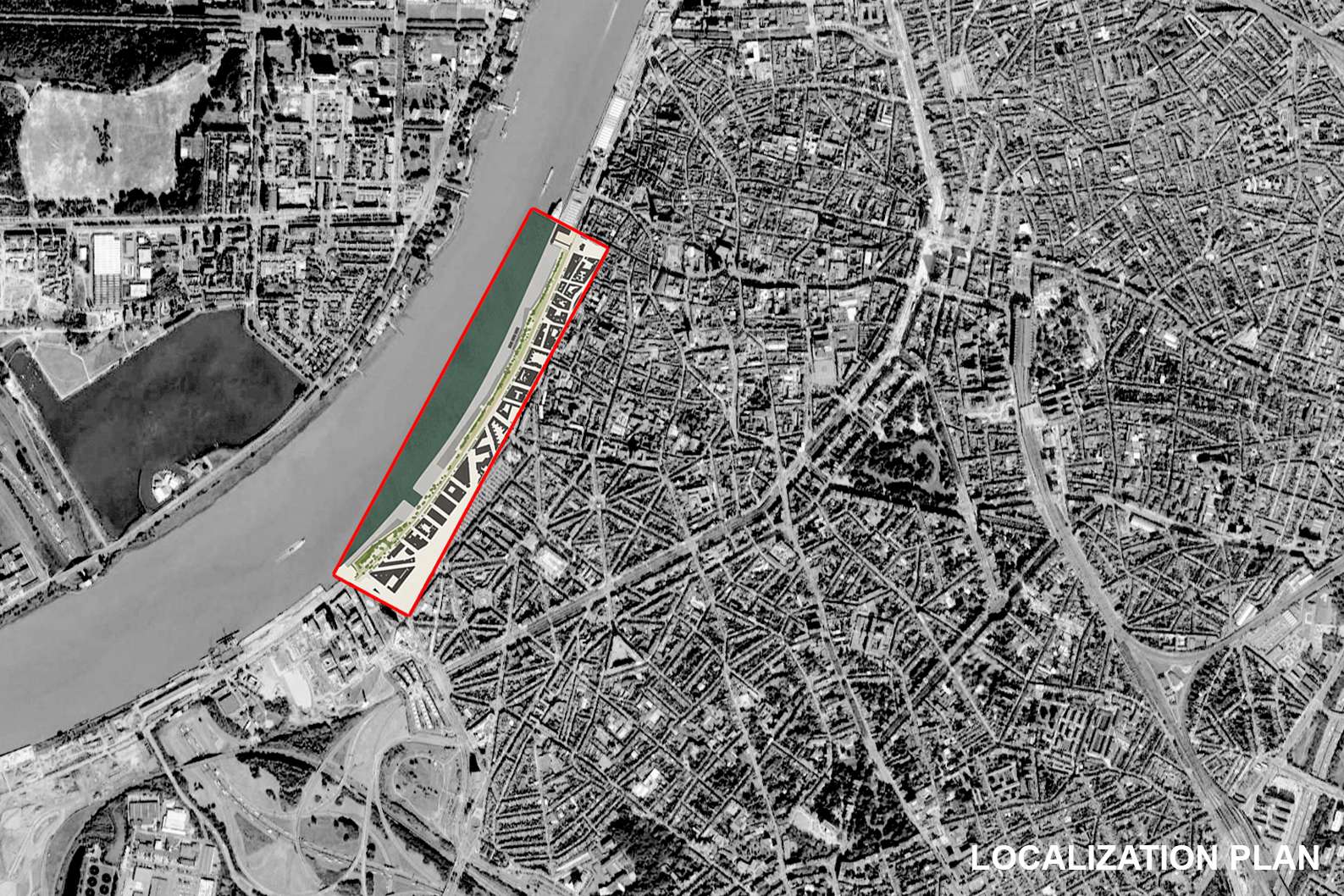 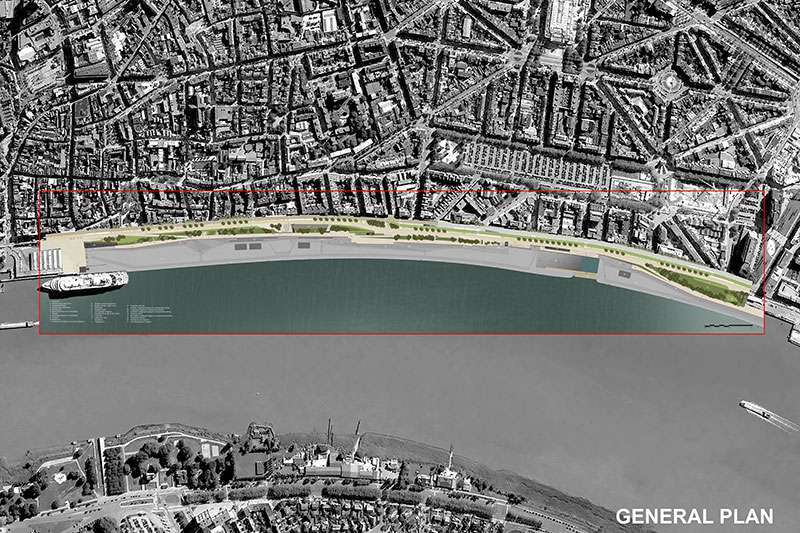 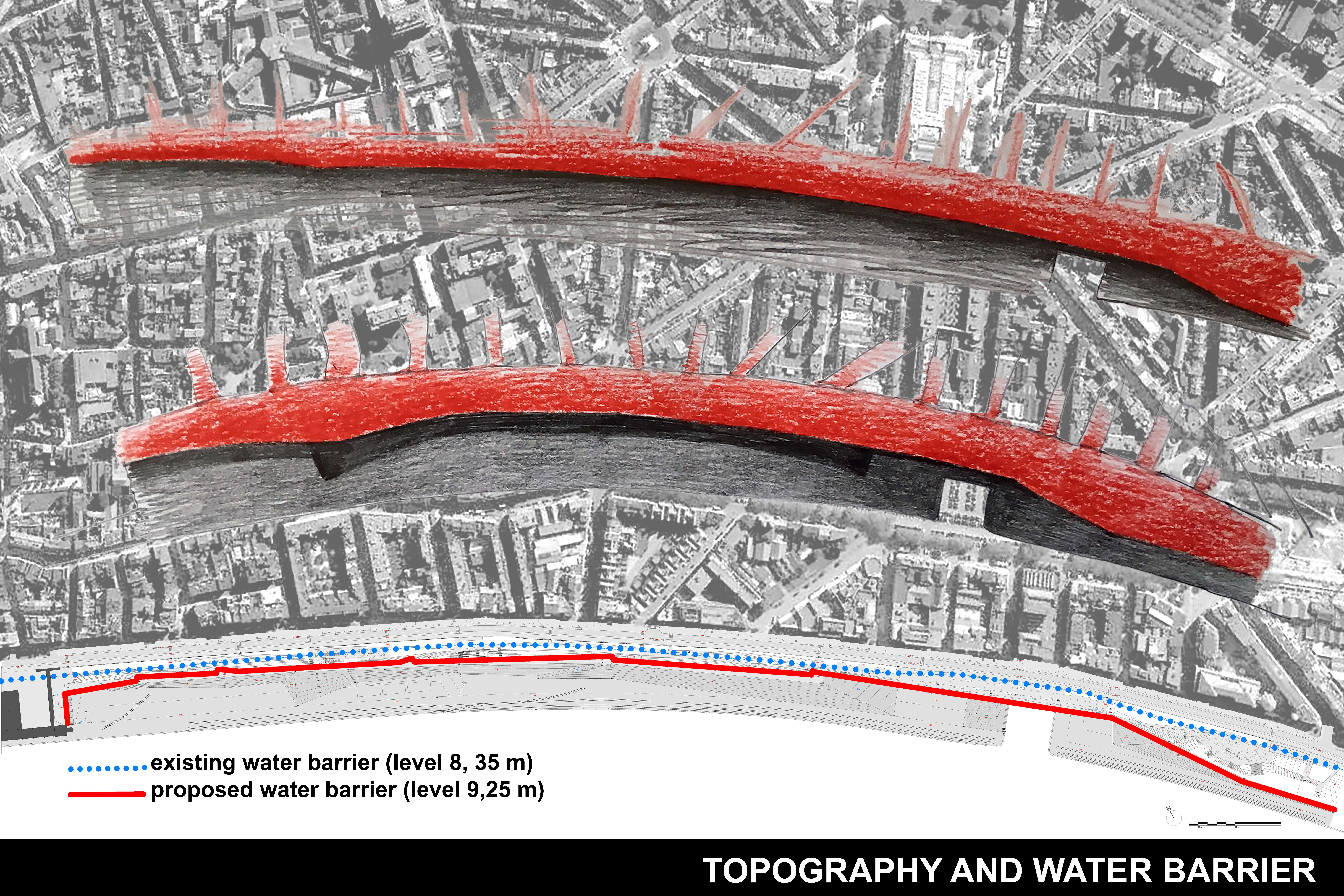 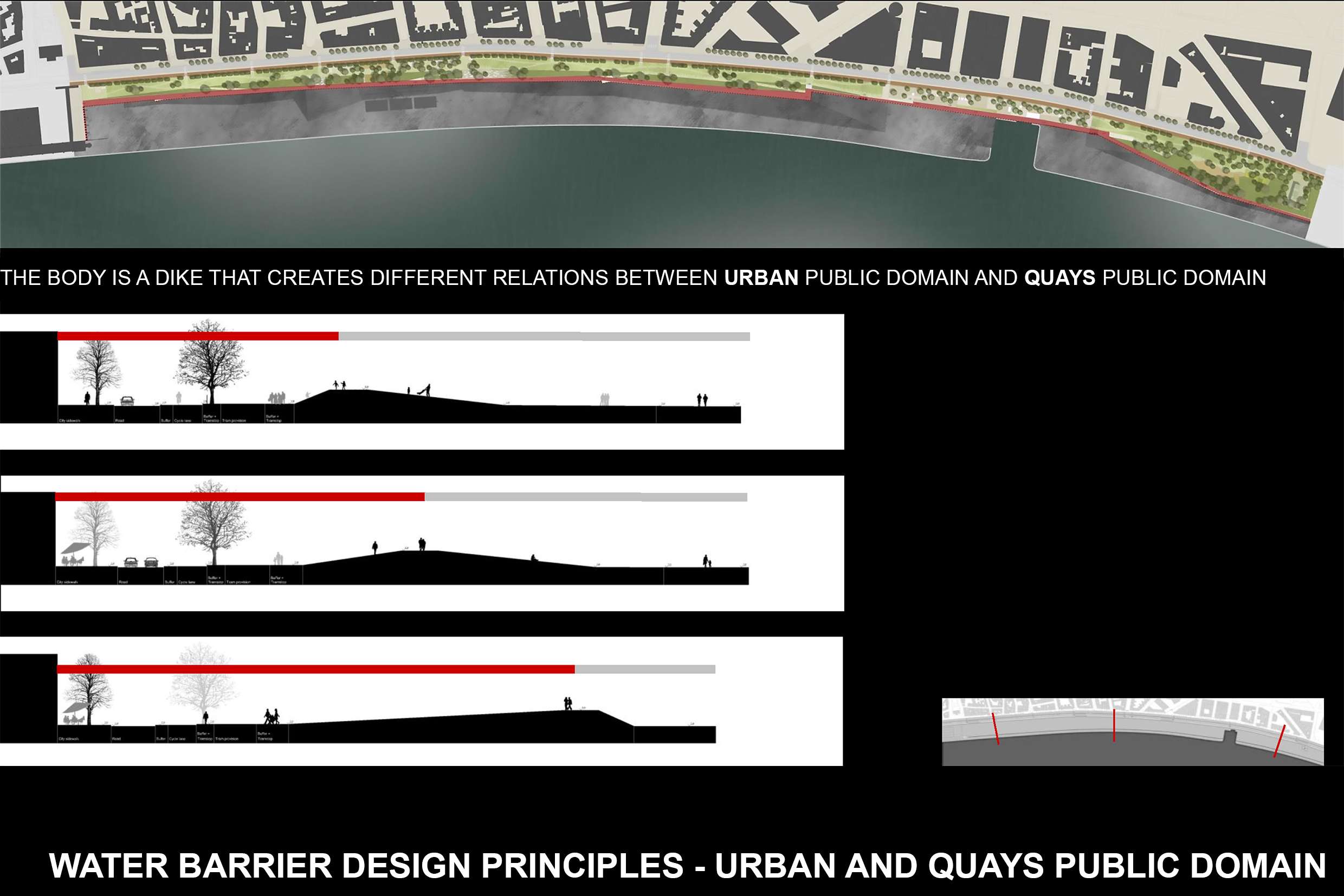 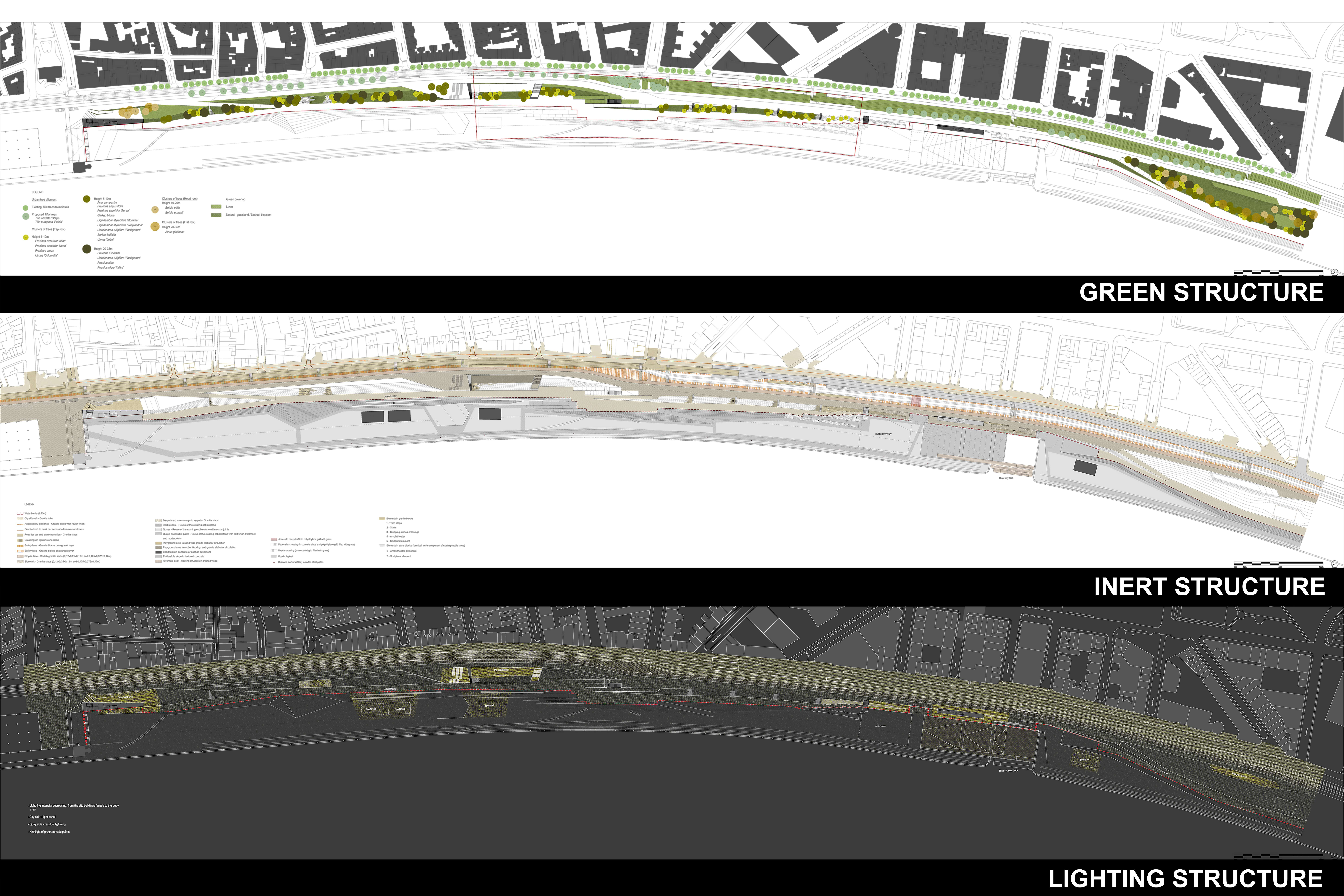 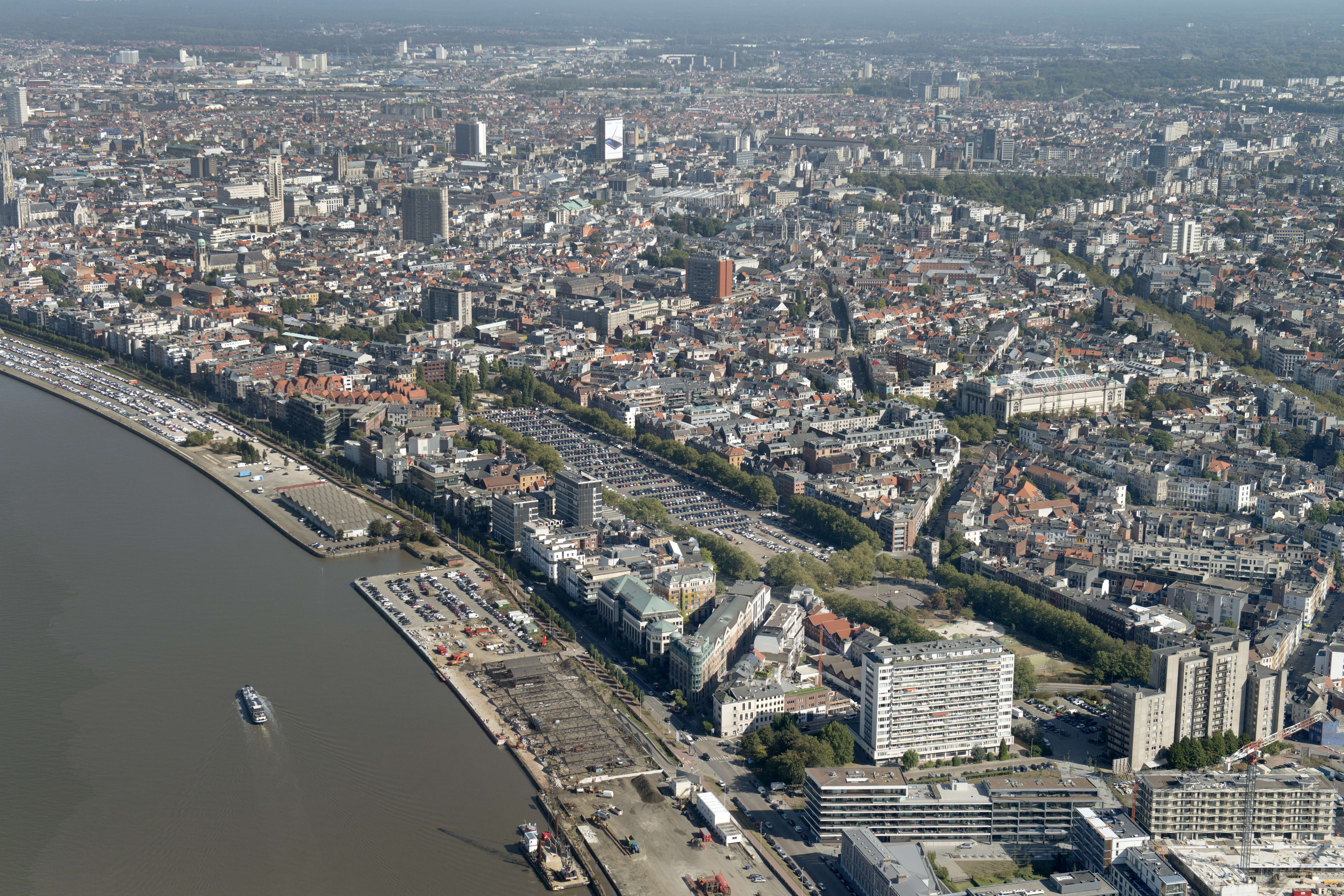 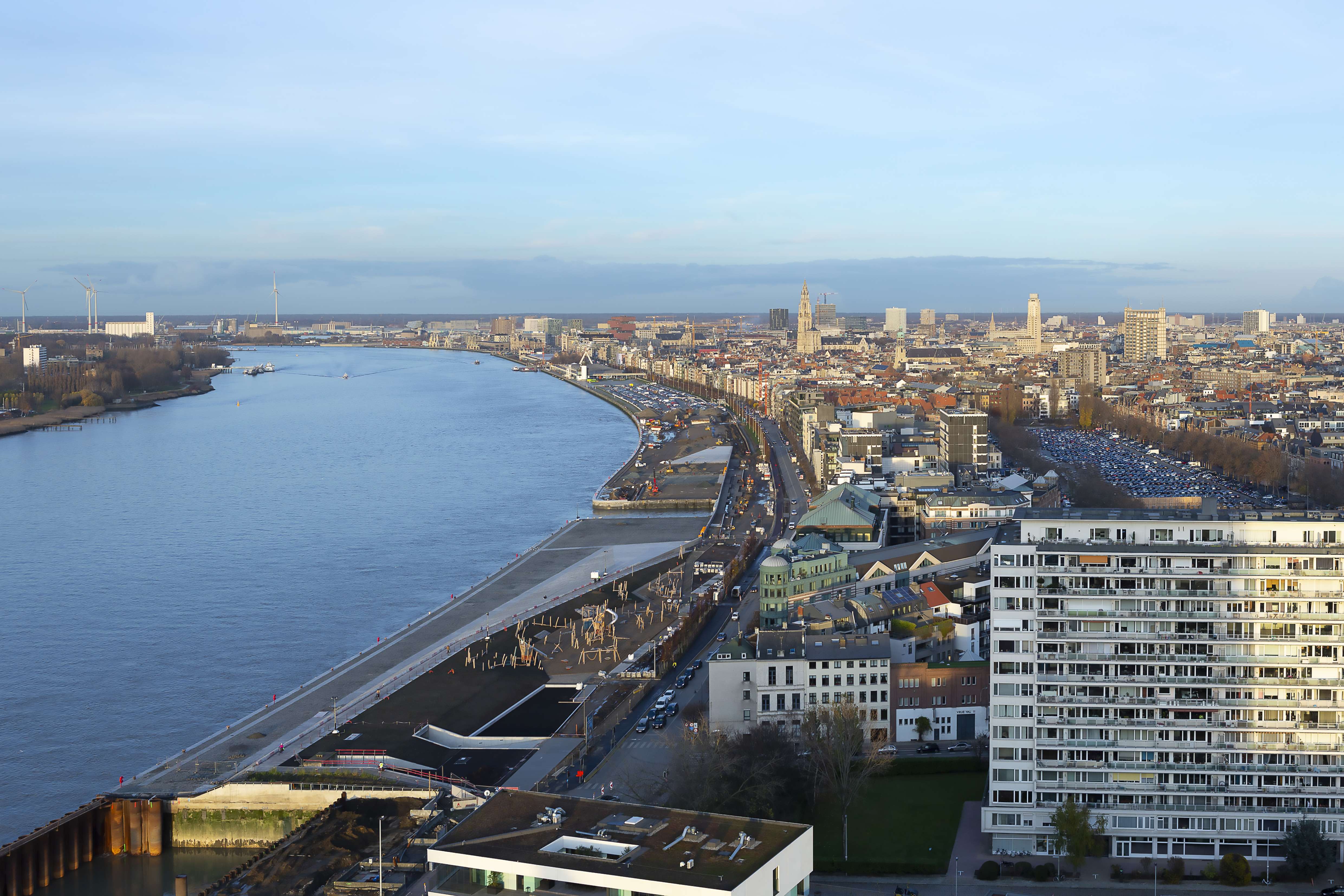 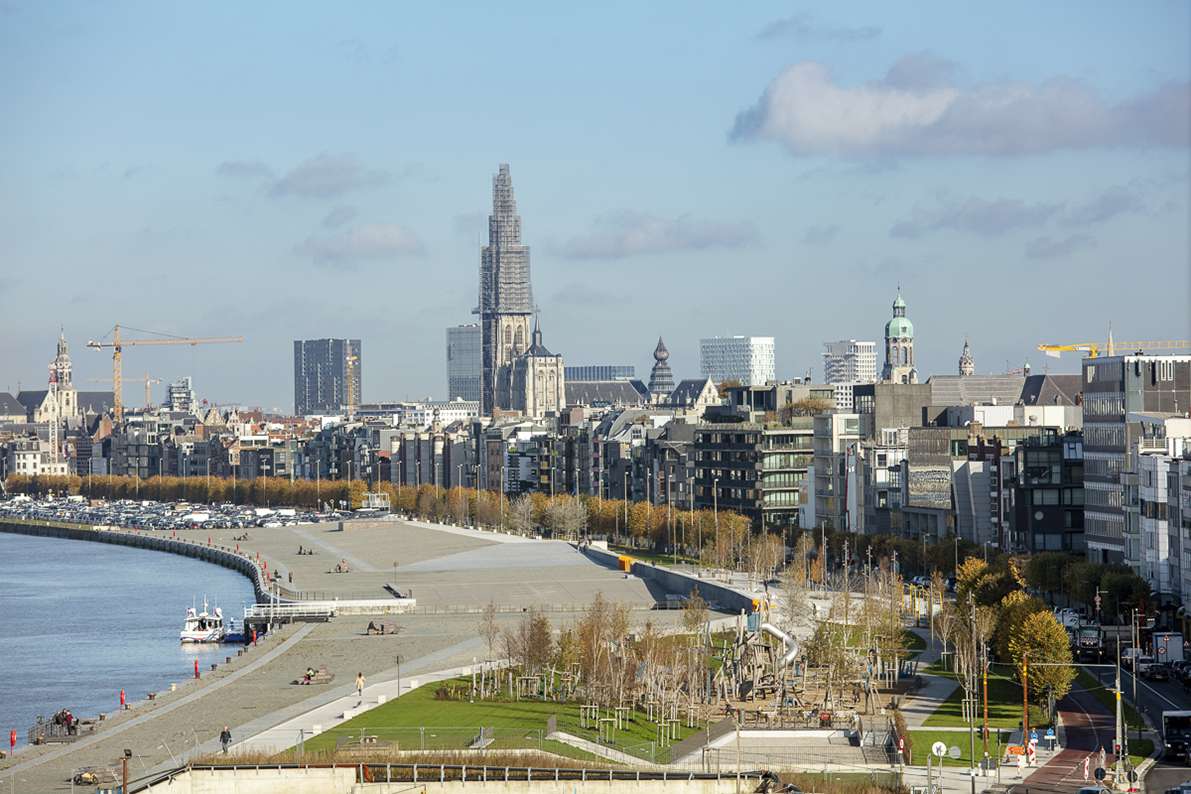 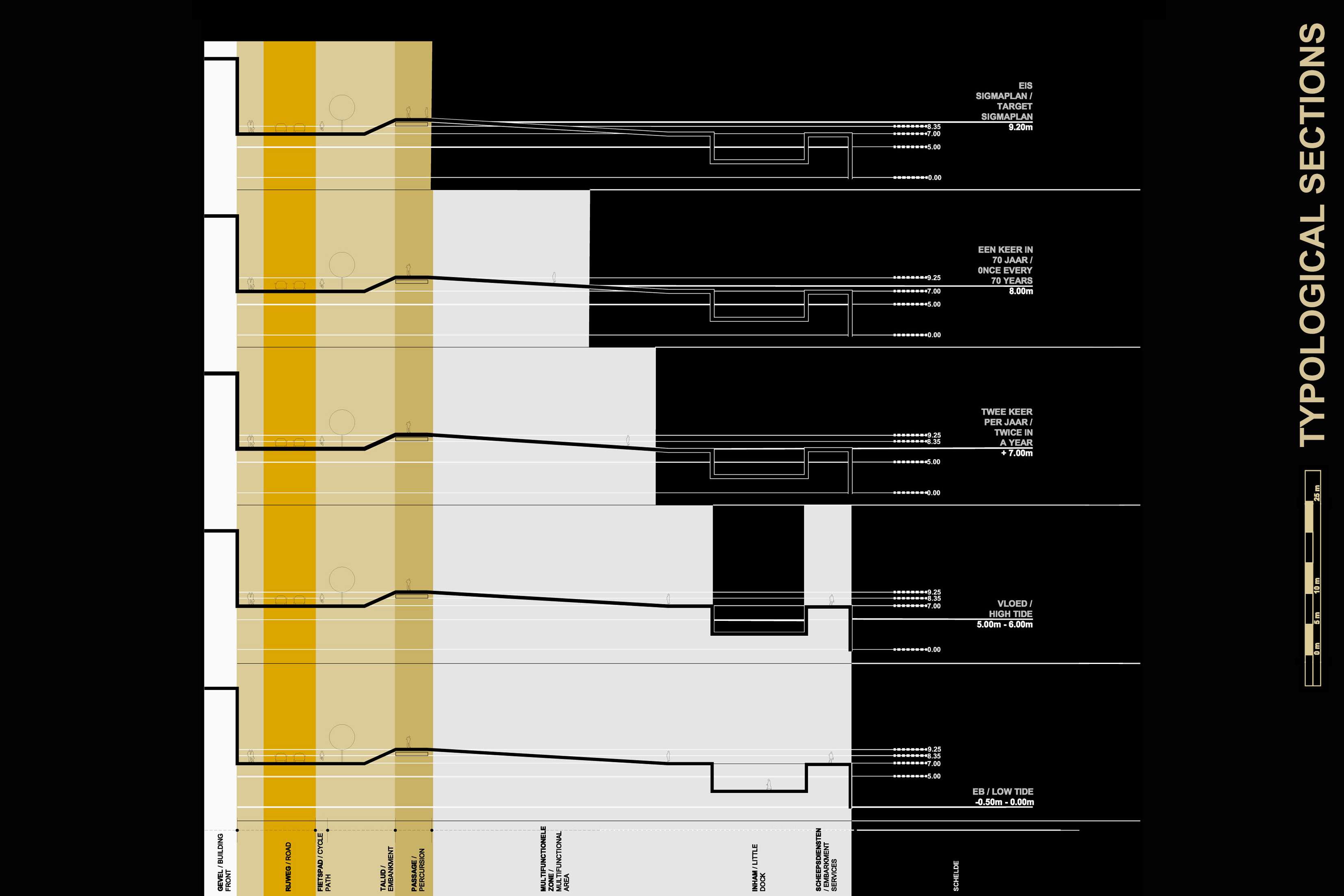 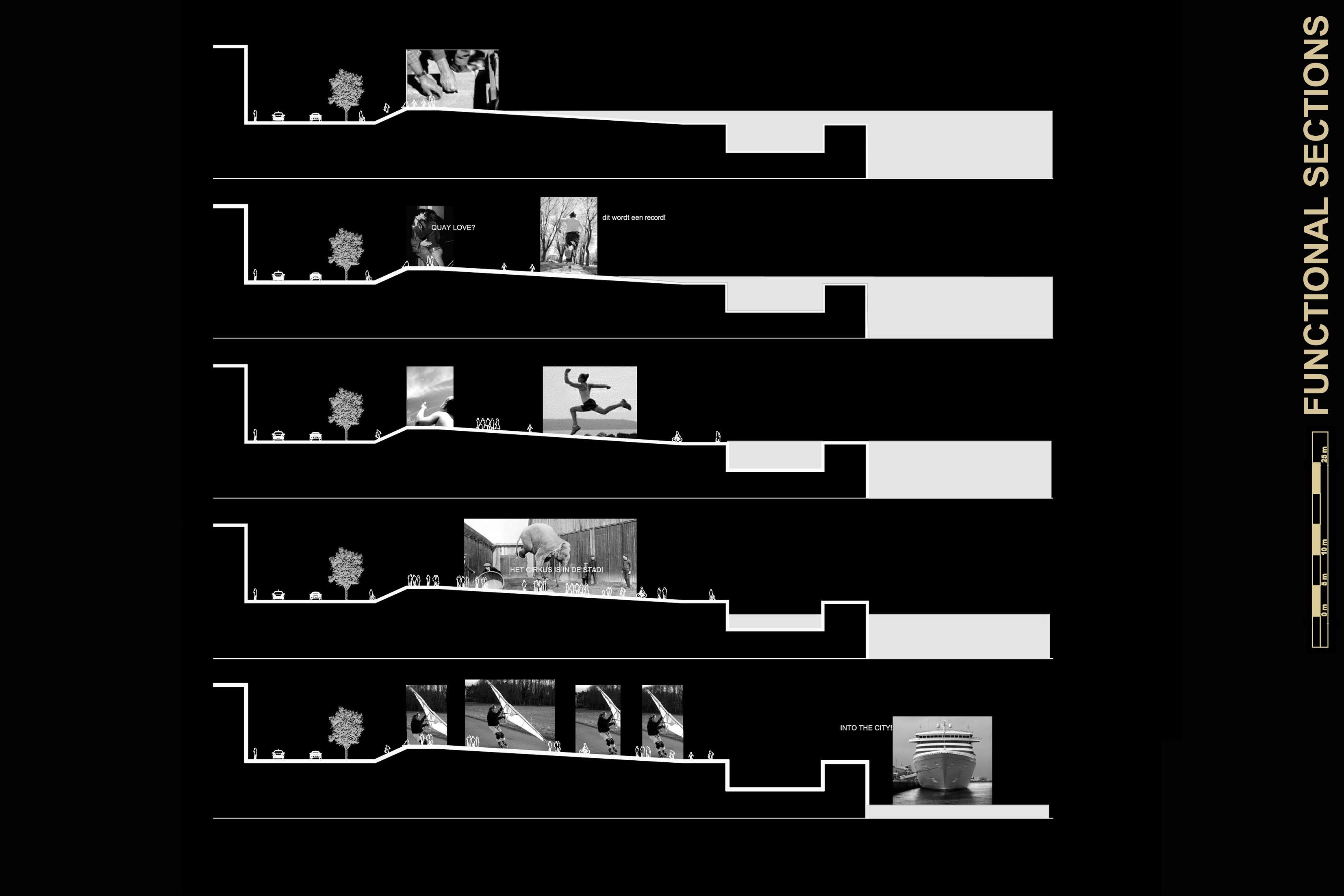 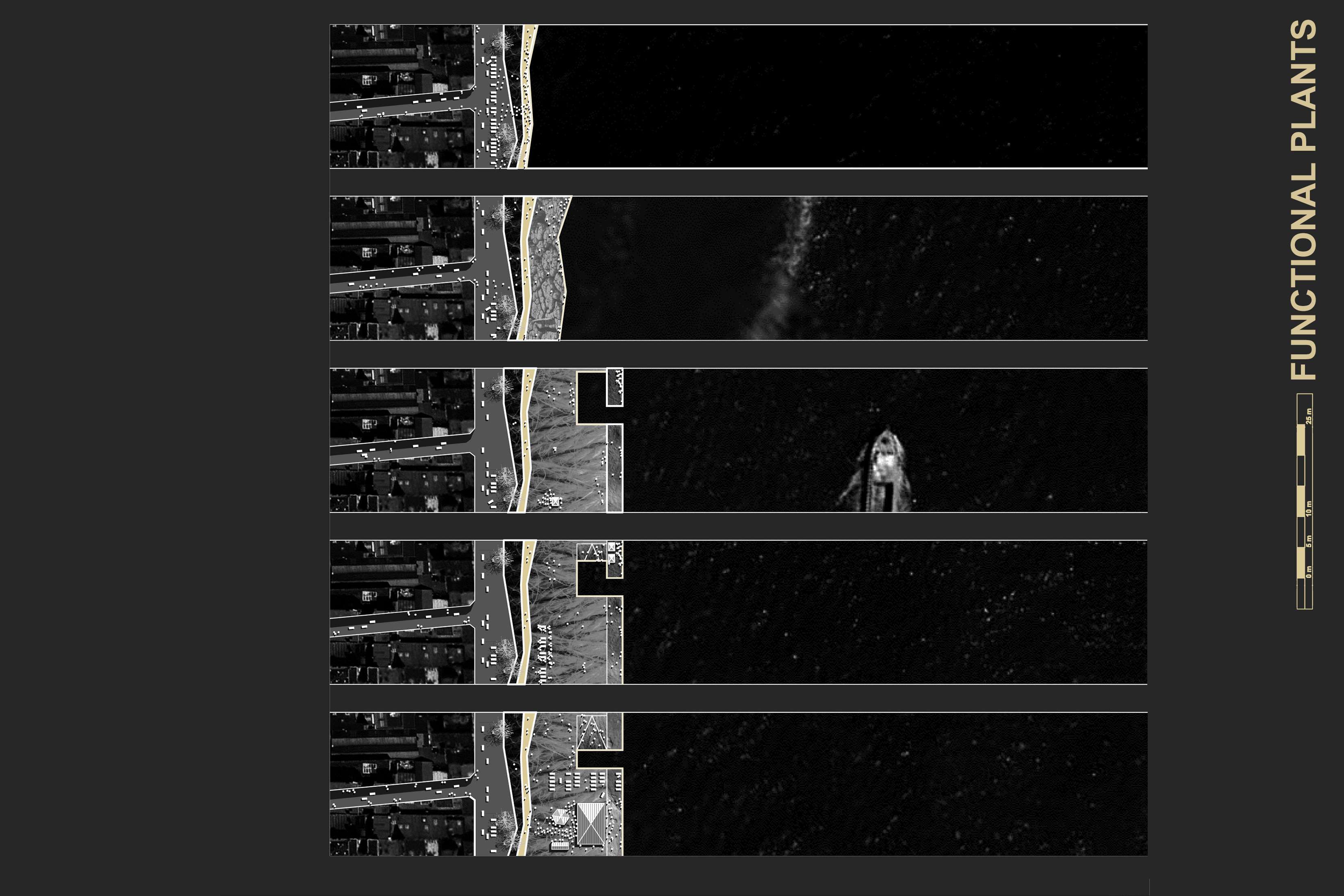 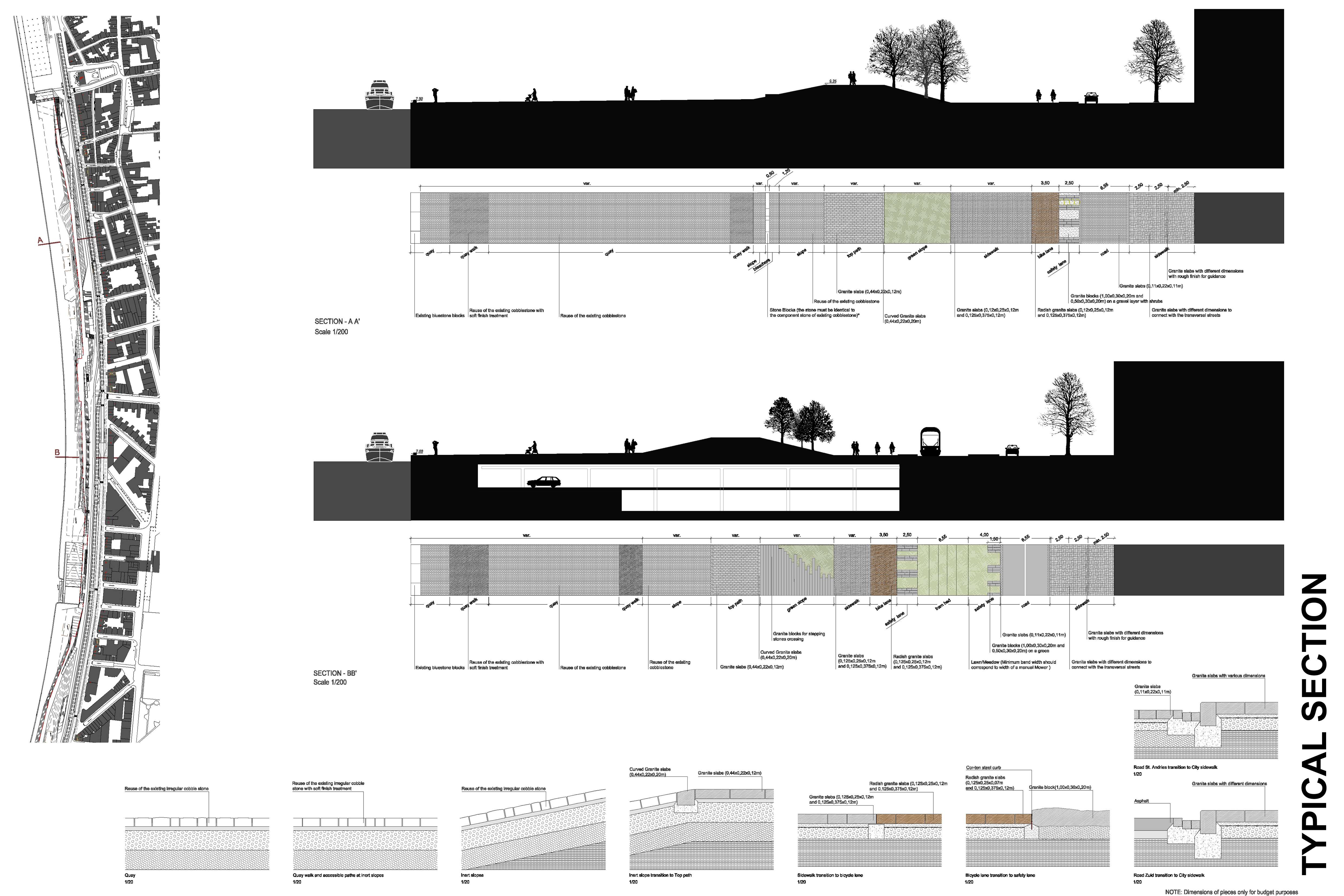 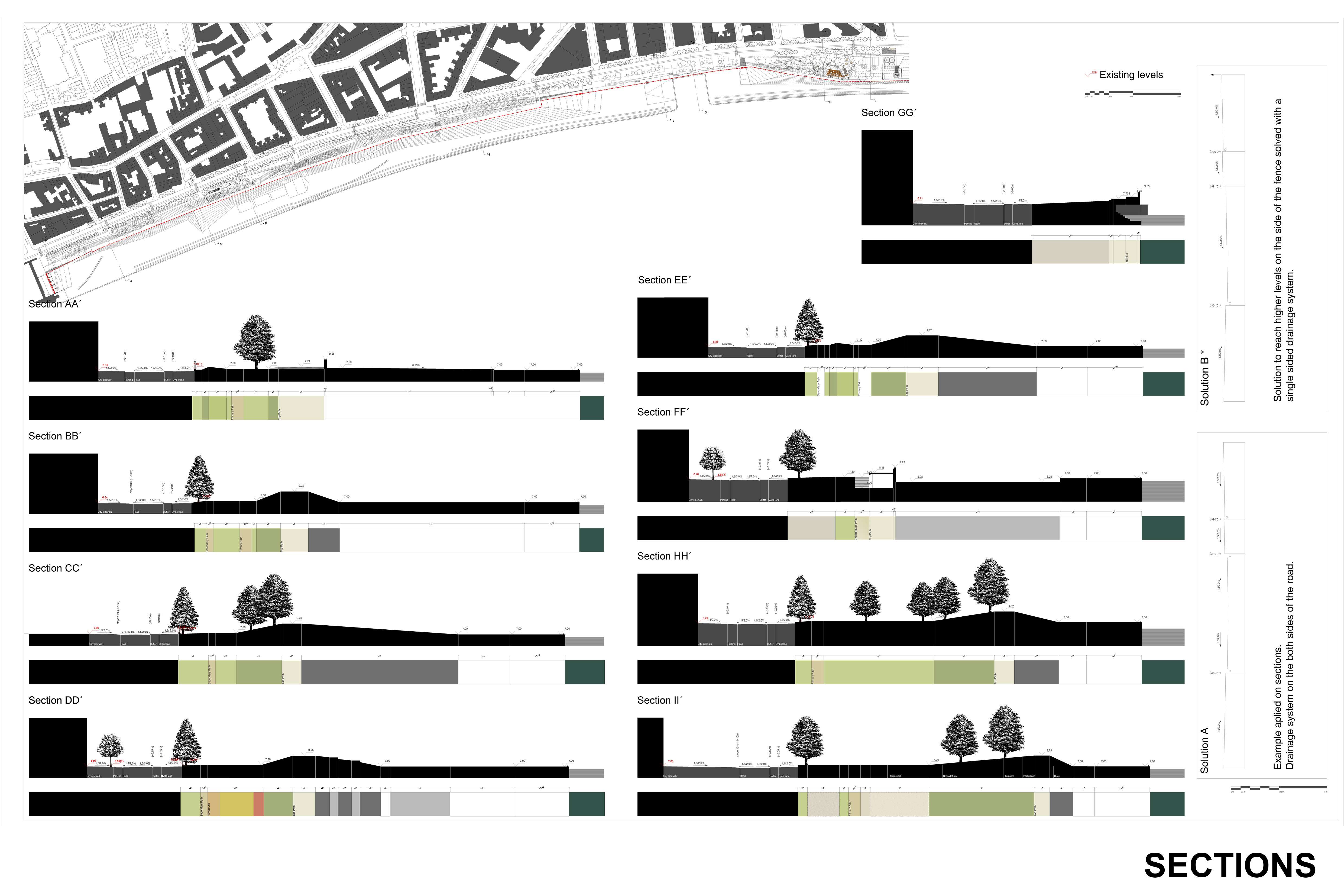 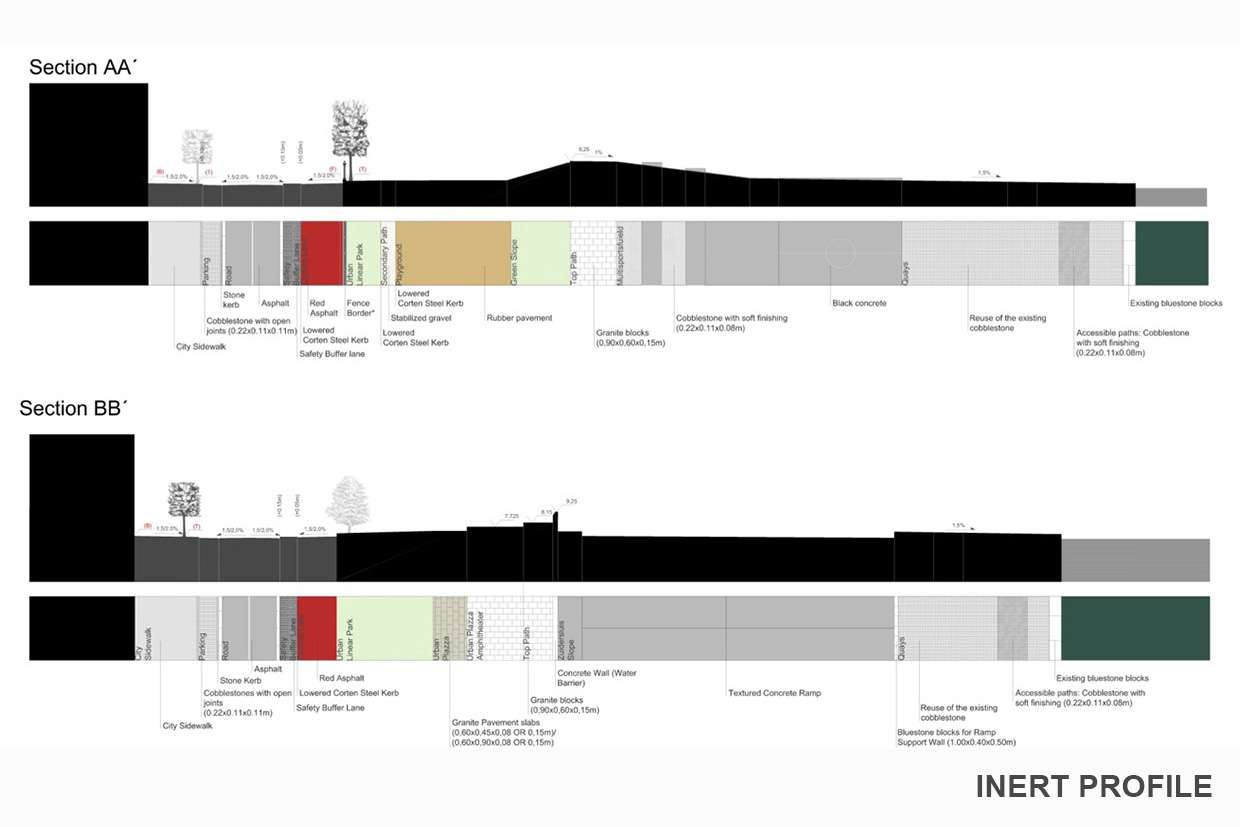 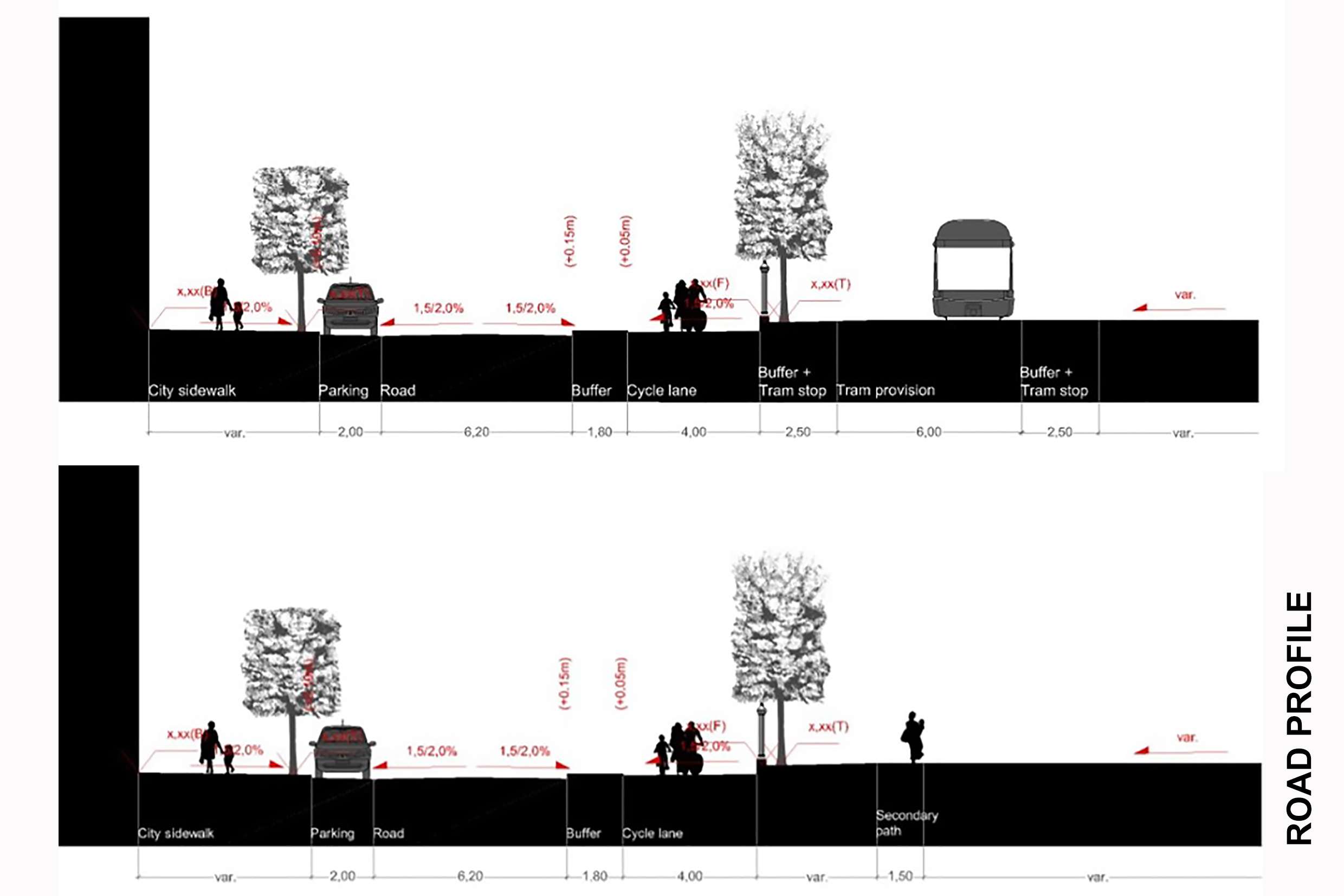 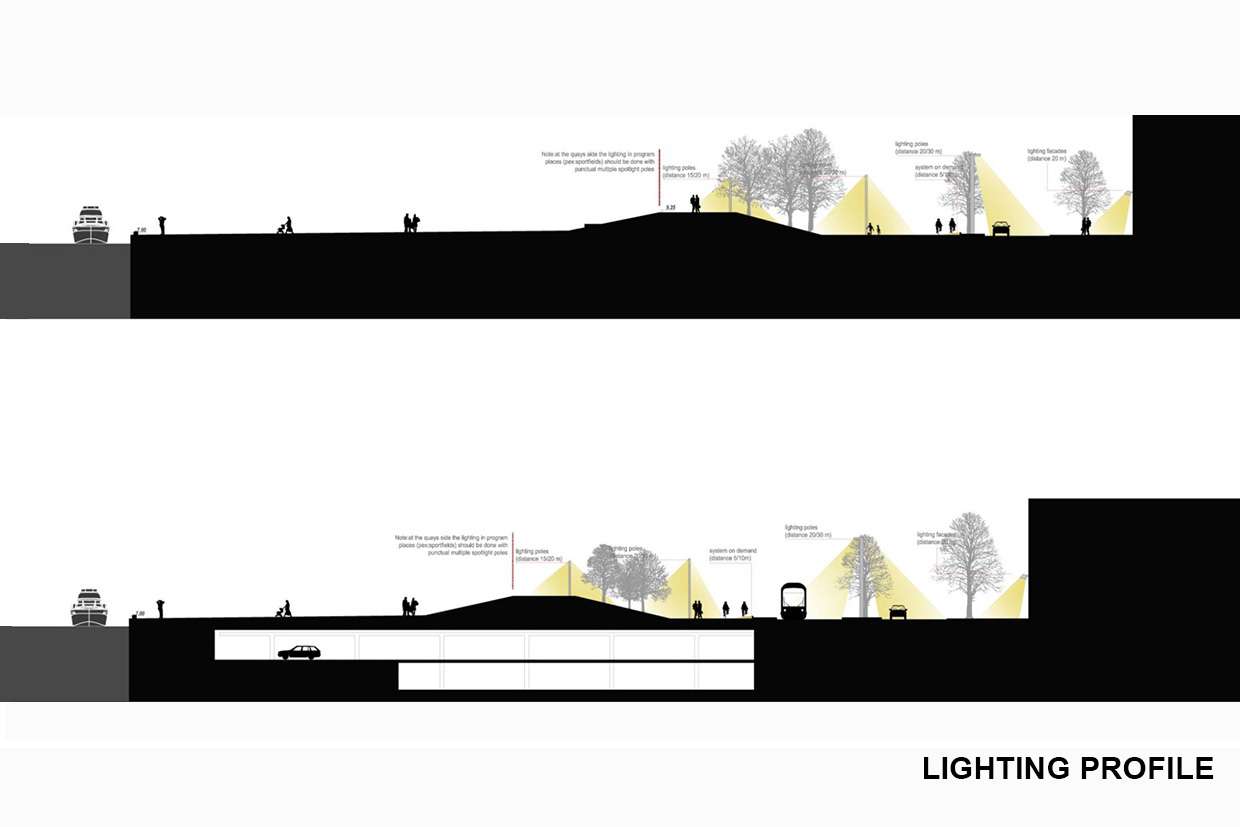 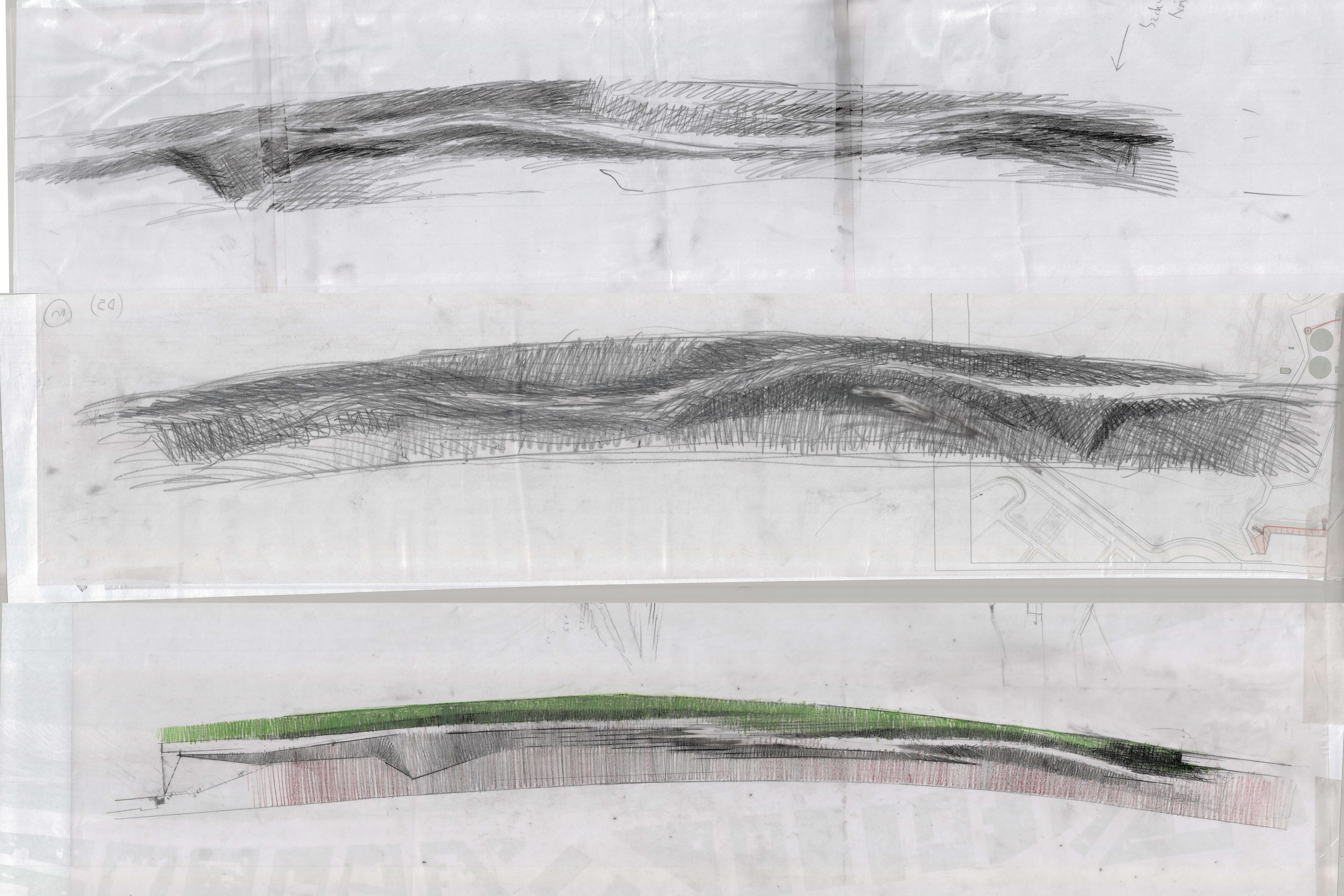 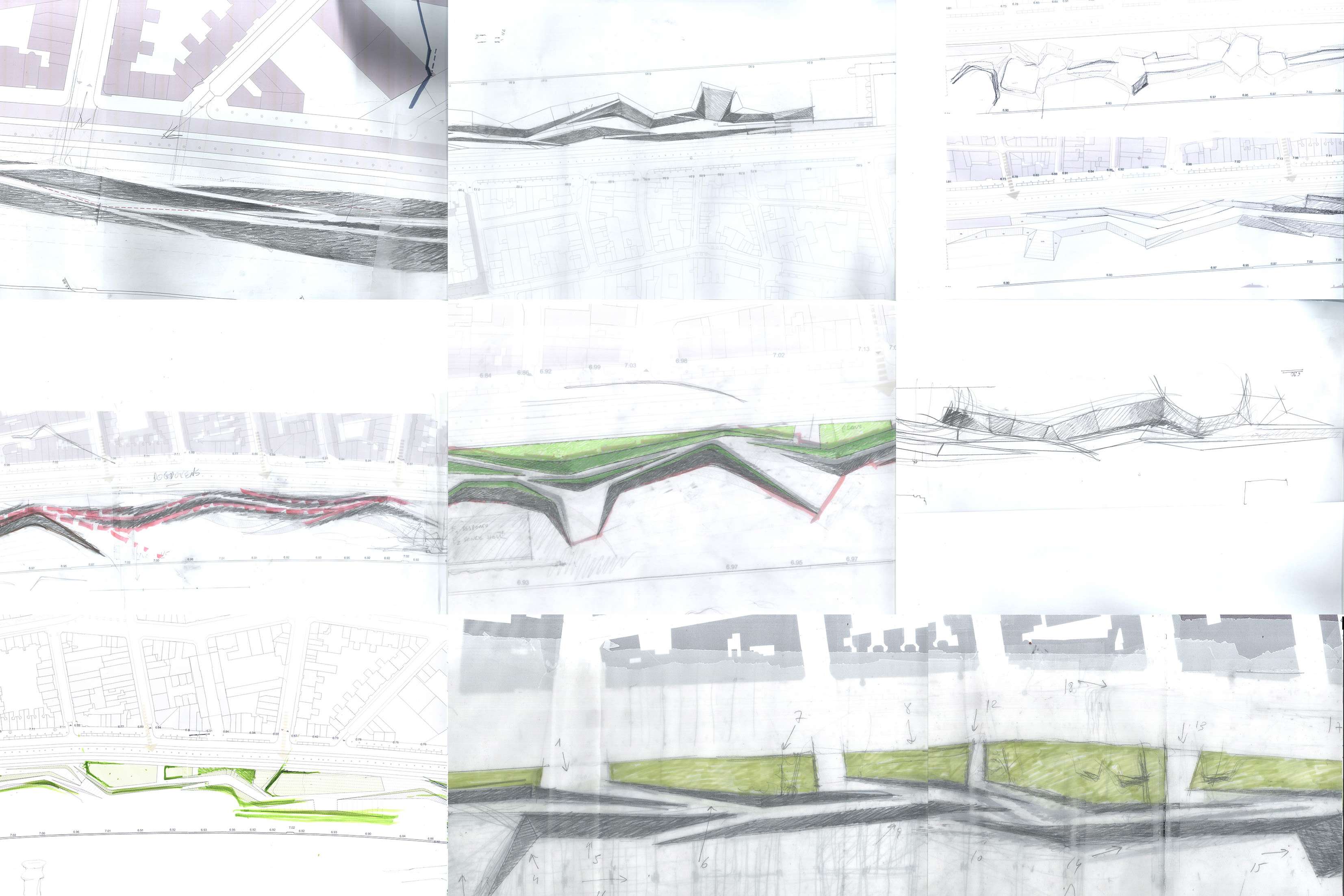 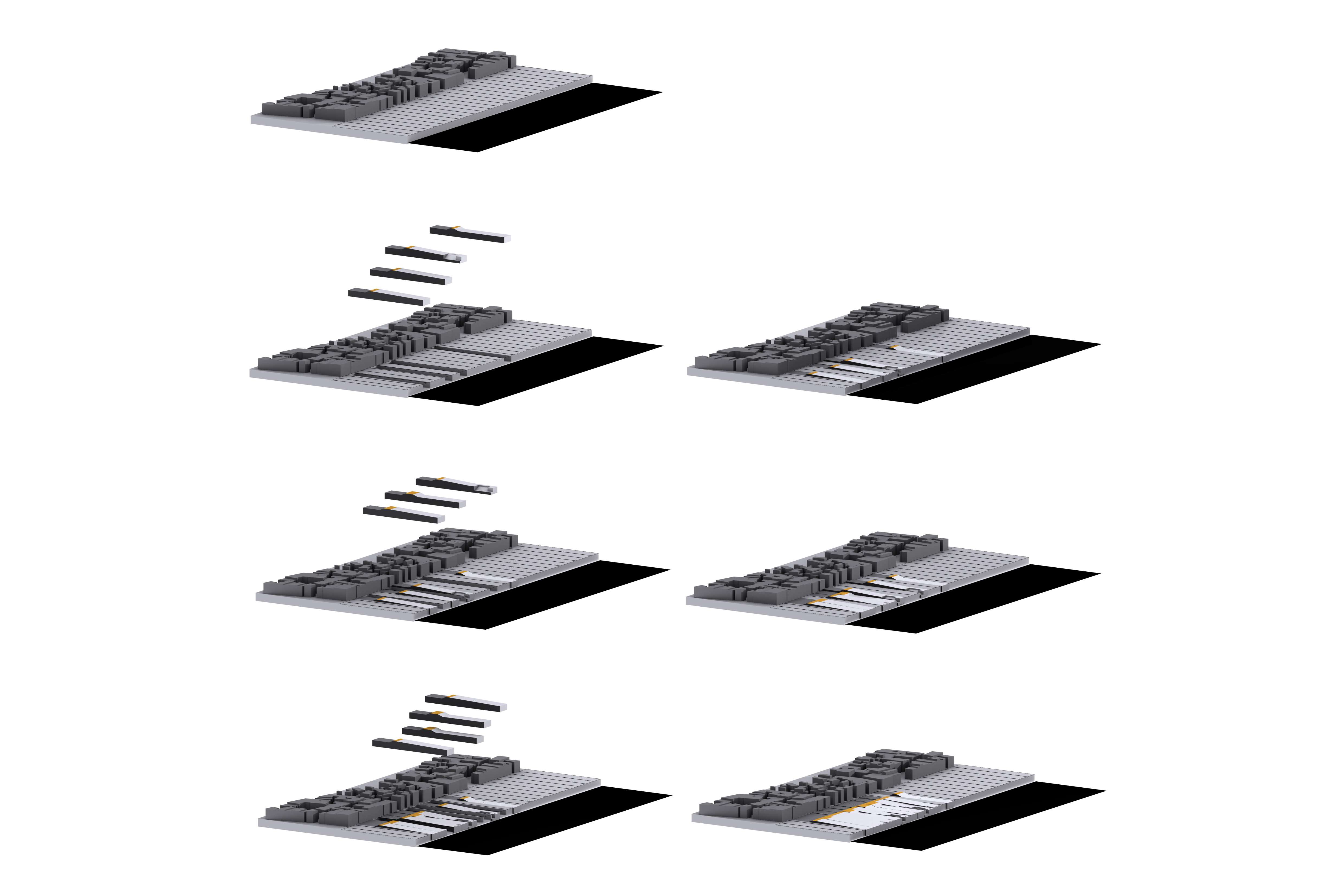 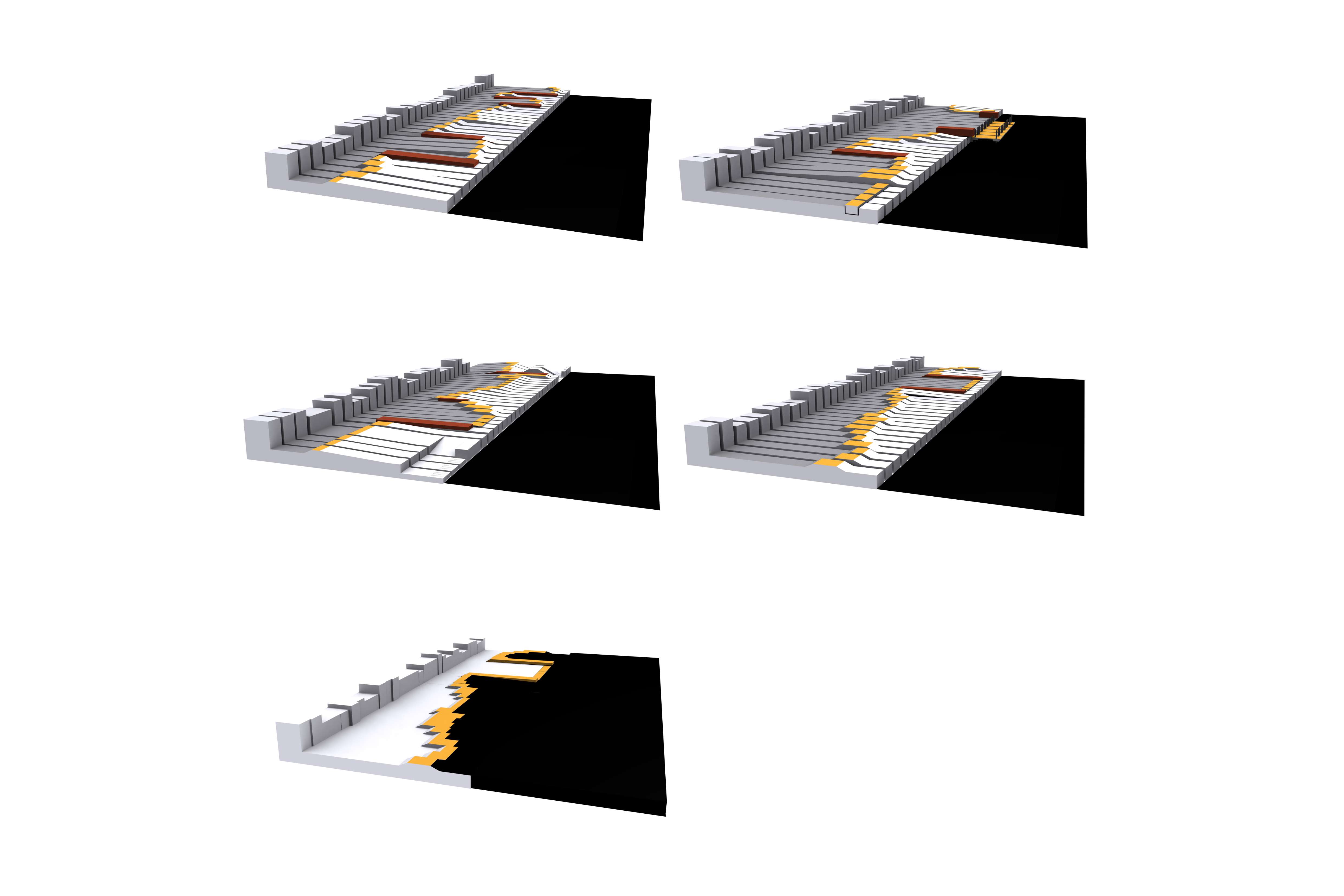 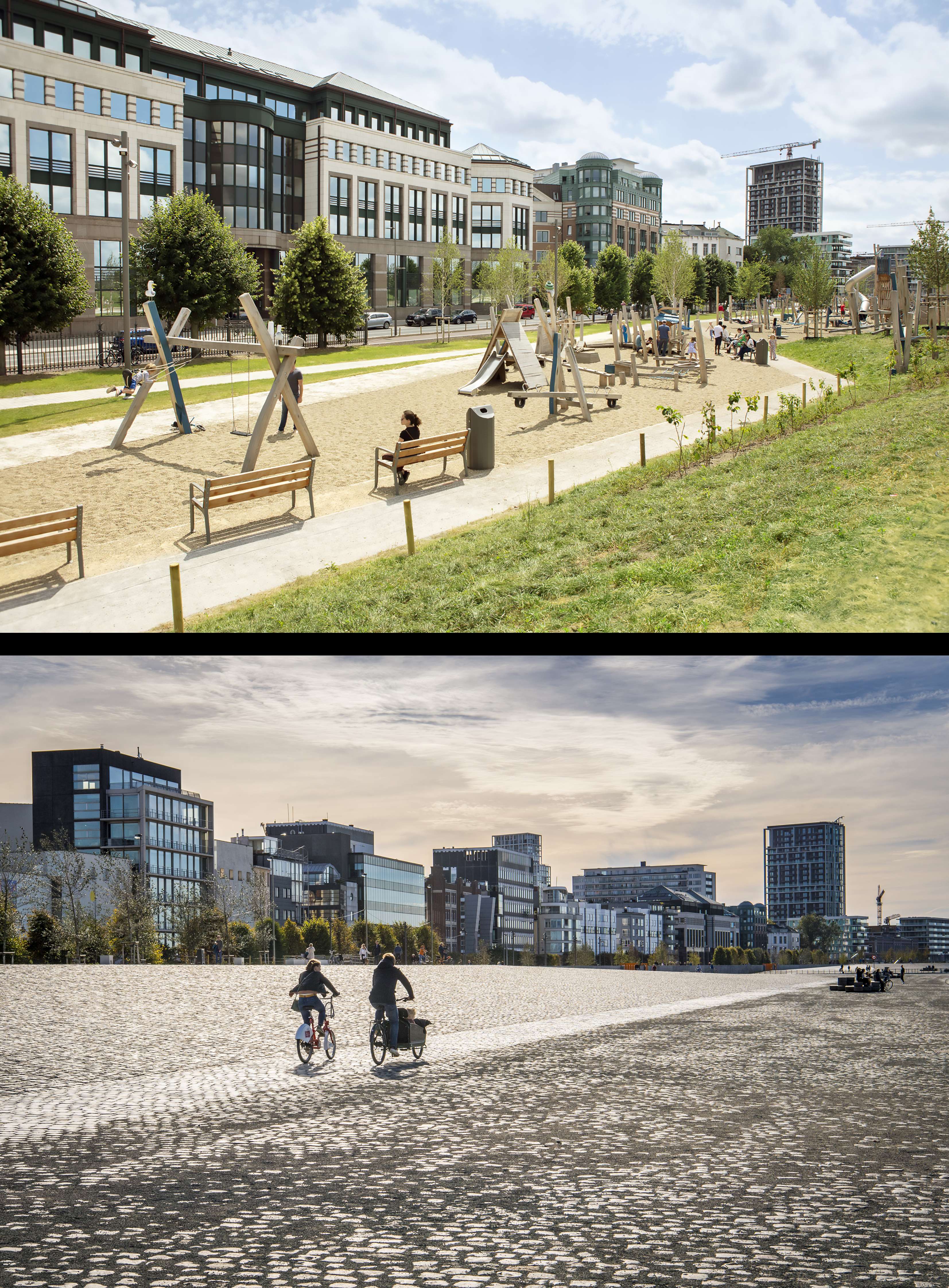 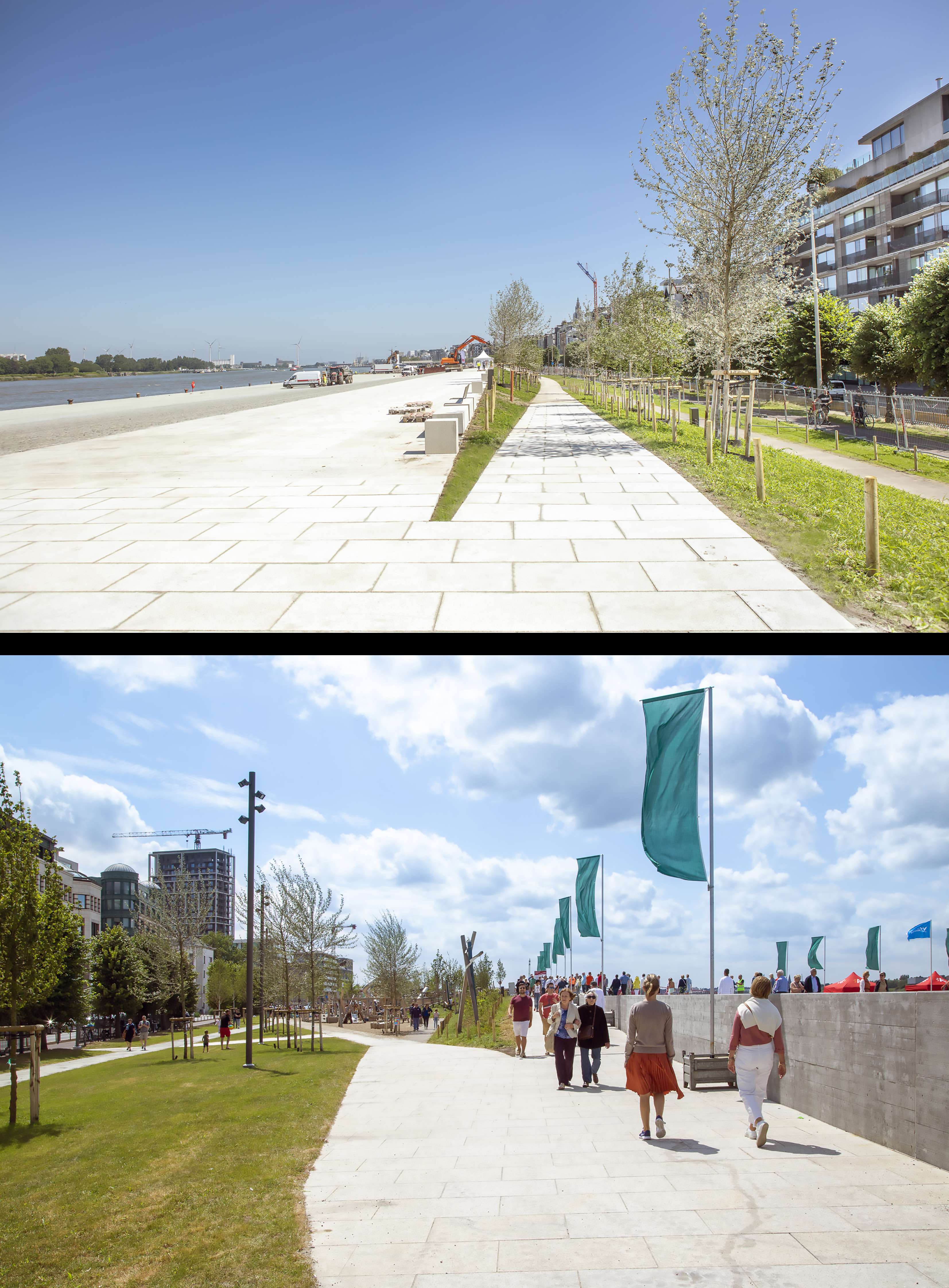 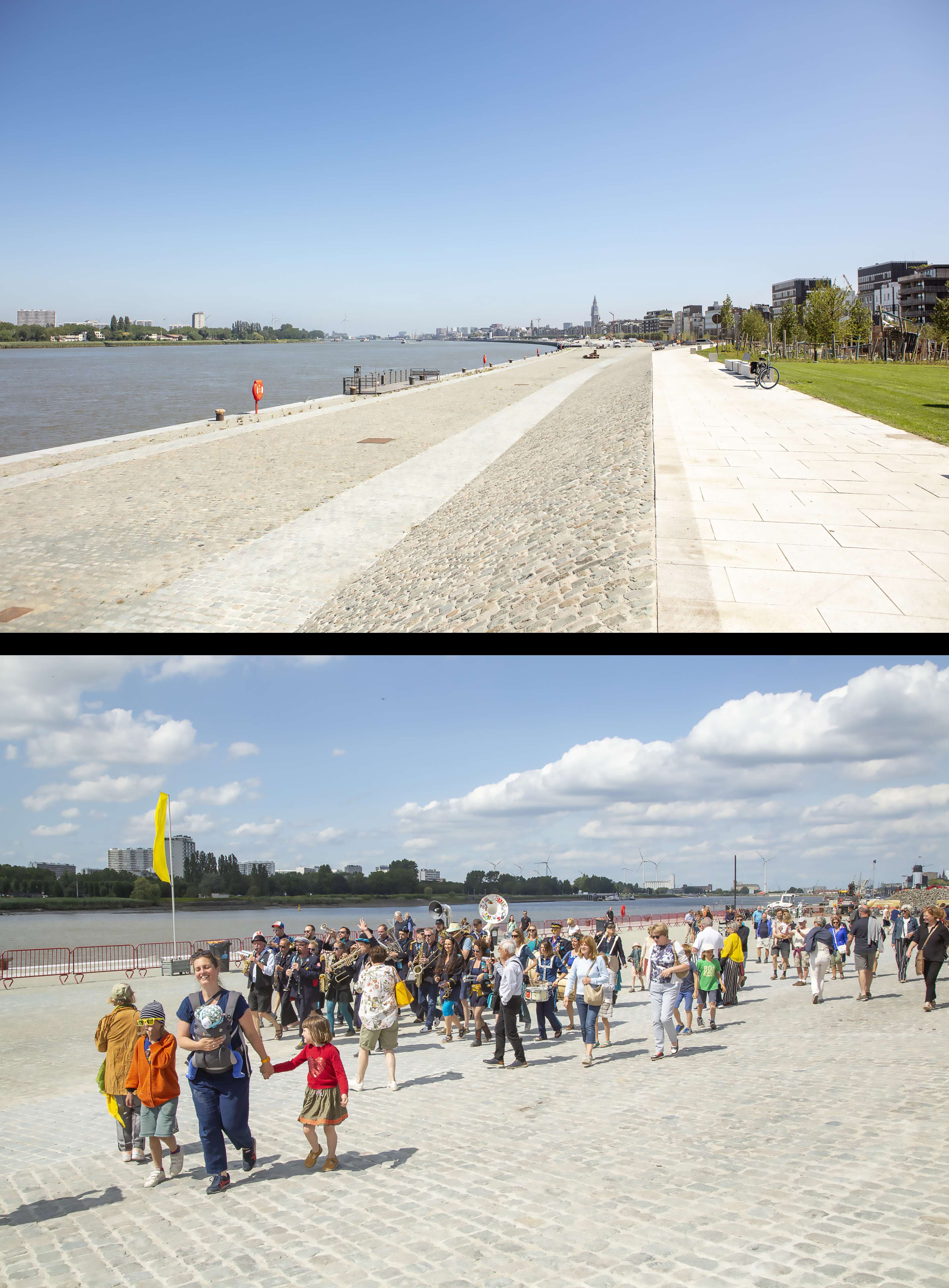 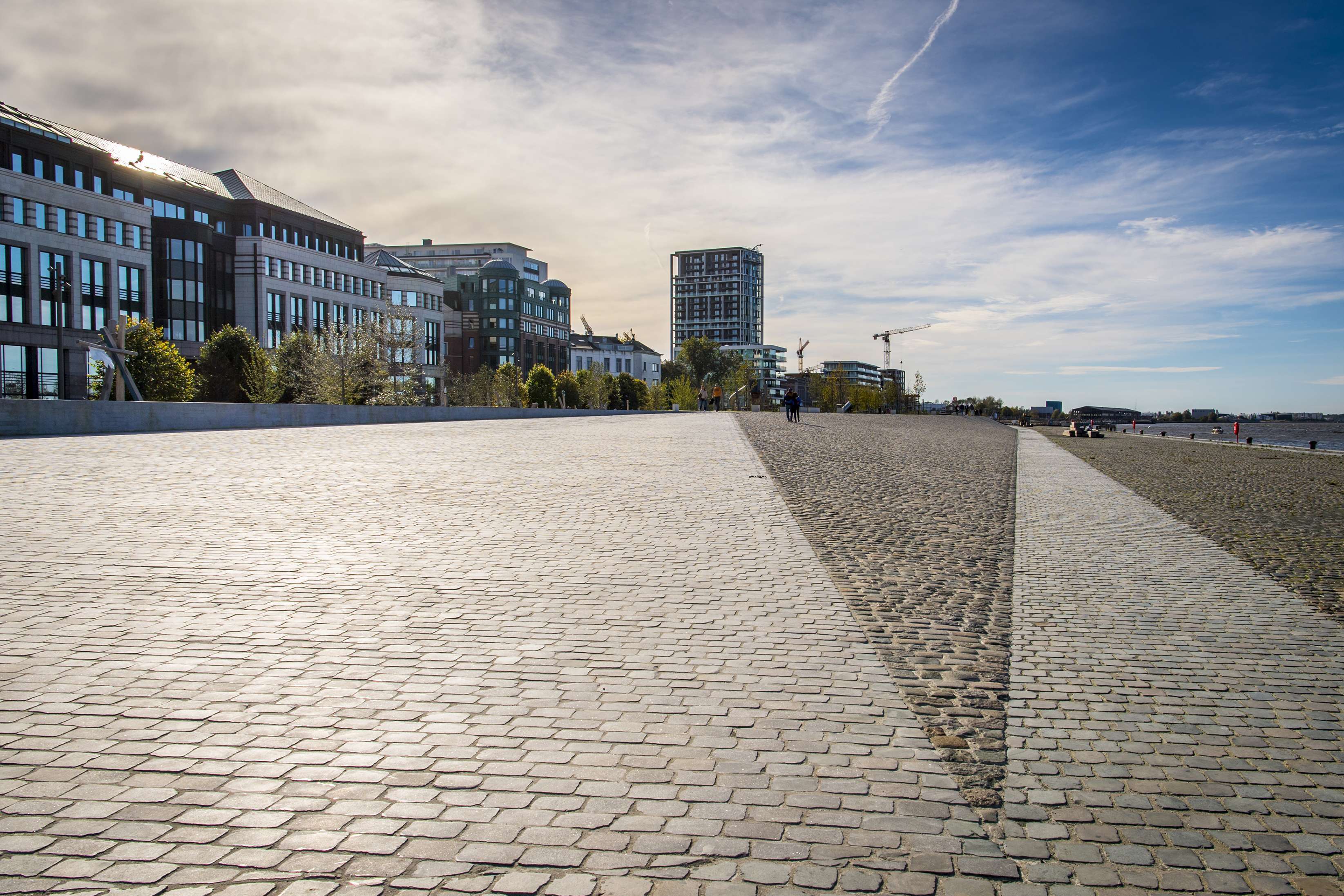 Over a distance of almost 7km along the banks of the Schelde, the inner city's ambition is to reconcile a new public space on the waterfront with a new, higher dyke to protect the city from this water. The project for the ‘Sint-Andries en Zuid’ area, one of the master plan's seven sub-areas, began in 2009. This master plan aimed to reconcile two seemingly incompatible agendas with one another. On the one hand, implementing a City on the River, whereby the quays act as a public space for the inner city that upholds the bond between river and city once more. On the other hand, following the guidelines in the Sigma Plan for protecting the city against the water flow by putting up a new uninterrupted dyke at the level of 9.25m TAW (Second General Water Level).

The dyke divides the quay area into a dry city side and a submersible river side. The dry and wet sides are distinguished from one another by their usage and materials. On the city side, a rich range of surfacings, alternating with green spaces, links in with a long list of small-scale programmes. The wet side can be identified from the extensive cobbled surface, providing ample service for temporary uses for as long as the river permits.

In the area of the ‘Sint-Andries en Zuid’ parts of the city, the urban structure covers a relatively extensive surface area of public spaces, thanks to the presence of the ’Gedempte Zuiderdokken’, where a park of nearly 10 hectares is being implemented. This can serve to limit the supplementary range of urban public facilities on the quays themselves. This makes the ‘Sint-Andries en Zuid’ project area a unique component of the quay structure, where a relatively large percentage of the surface area can be released to the submersible wet side of the dam.

It is this duality that also translates into the dykes bilateral nature. It was important here to develop the city-side section (the dry side) as a linear park, whereby the dyke largely stands out as a gentle green slope, with trees and informal recreational areas.

Whereas the most northerly zone lends itself to informal use and recreation in a relatively spontaneous  manner, the central zone, with its more mineral, paved layout, offers opportunities for organising more intense urban programmes and activities, such as markets and exhibitions. In the most southerly section, the park provides sufficient space for a fitness zone, a playground, a dog-walking zone and a washing and transfer area for city service road sweepers serving this new public space and part of the inner city.

In contrast to the city side, the river side will only allow for temporary activities. The Quay Area here is a place to get a breath of fresh air for the city, where you are free to do anything or nothing. The quay area forms a vast open space here, a unique urban landscape with explicit references to the historical harbour (reuse of the cobblestones as paving material with integration of the existing dock crane tracks and retention of the mooring facilities for large sea vessels). A wide range of temporary uses can be scheduled here, from sporting events to concerts or open-air films.

On this wet river side, the central section, in the area of the South Lock, will also be the place for hosting a large number of activities owing to its specific conditions. The quay area slopes gently towards the water here, creating one of the rare locations on the Quays of the Schelde that brings the river tangibly close to the public space. The slope provides smooth contact with the water in the form of an urban ‘beach’ with a southerly orientation and wonderful views over the curve of the Schelde.