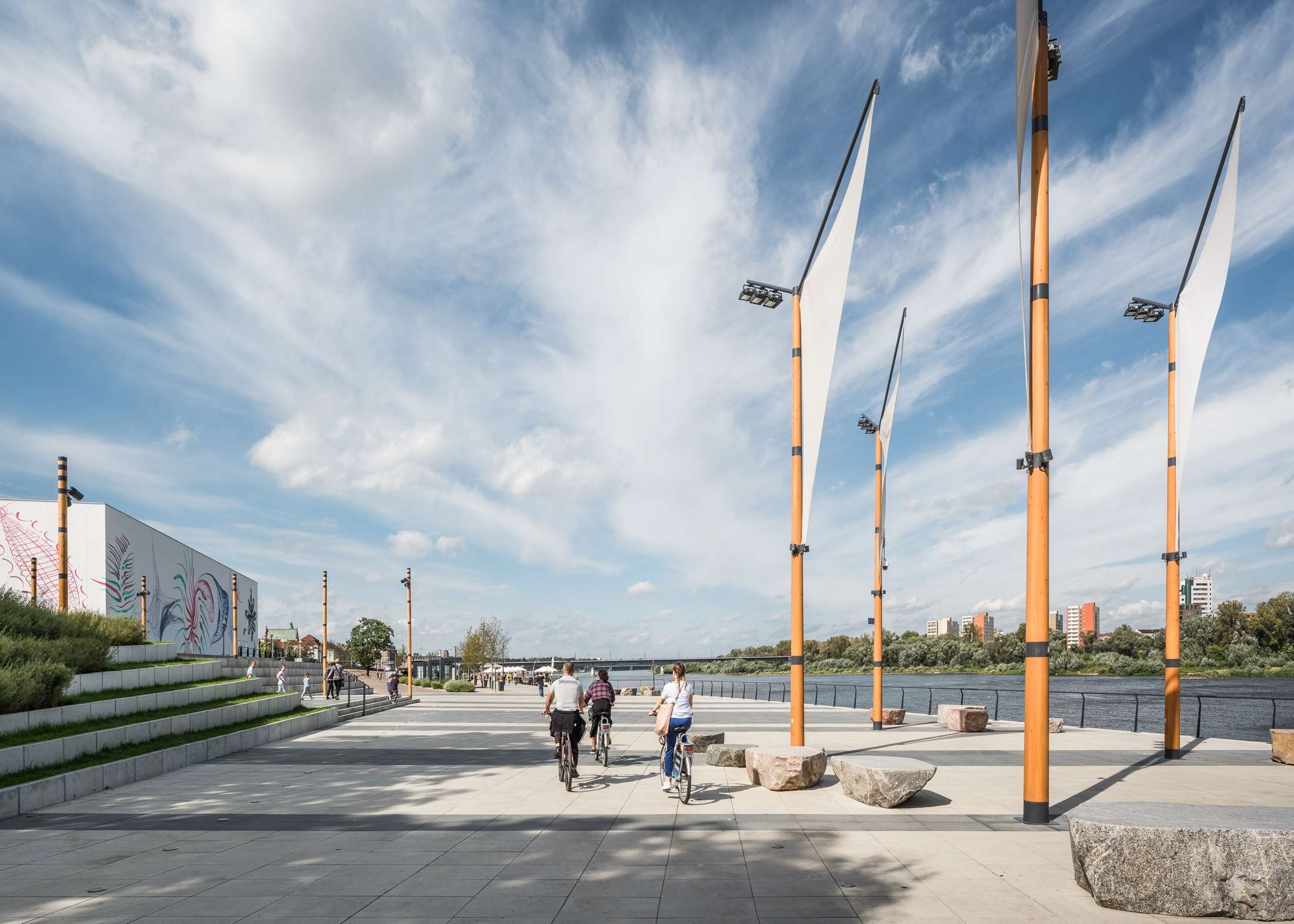 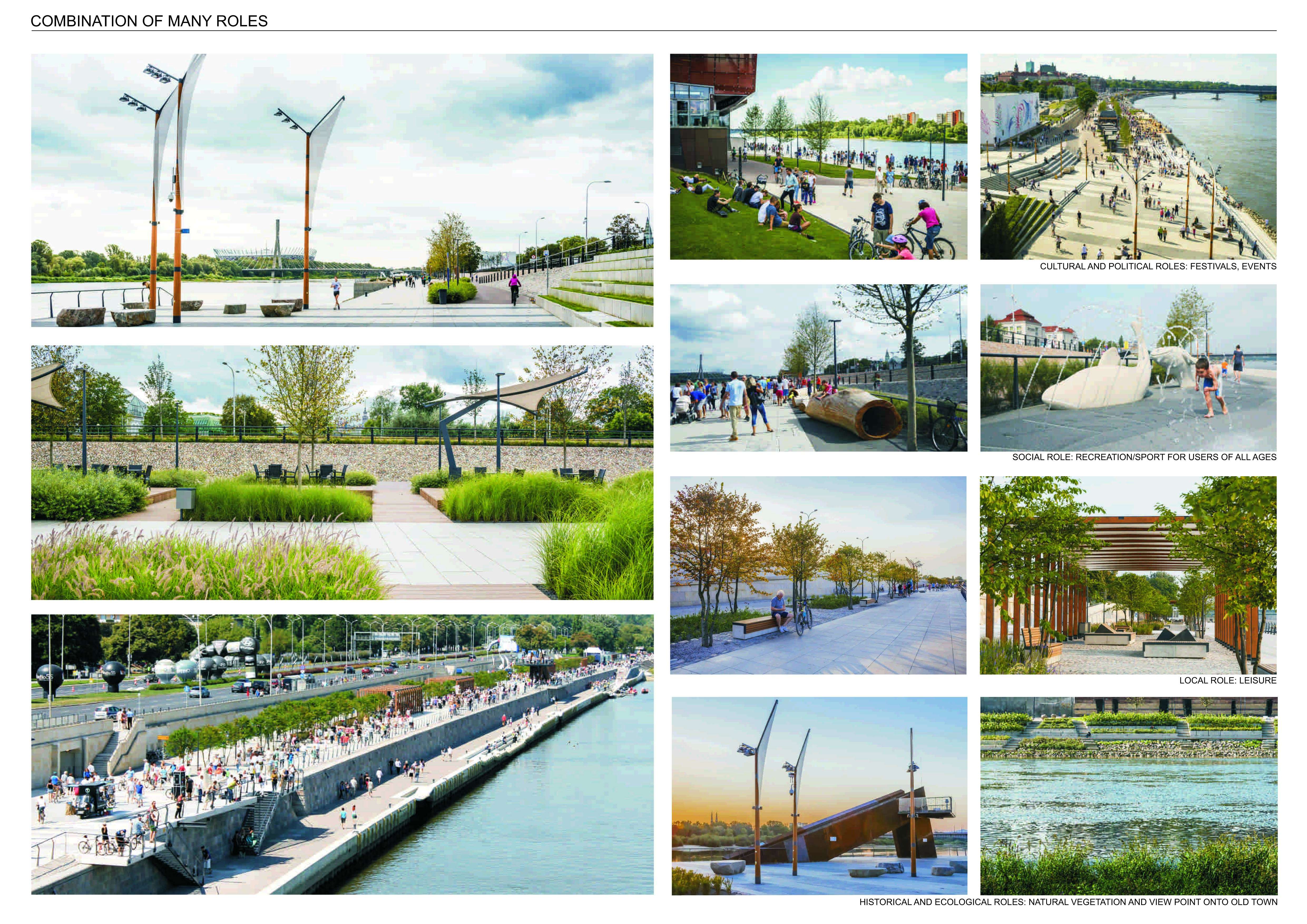 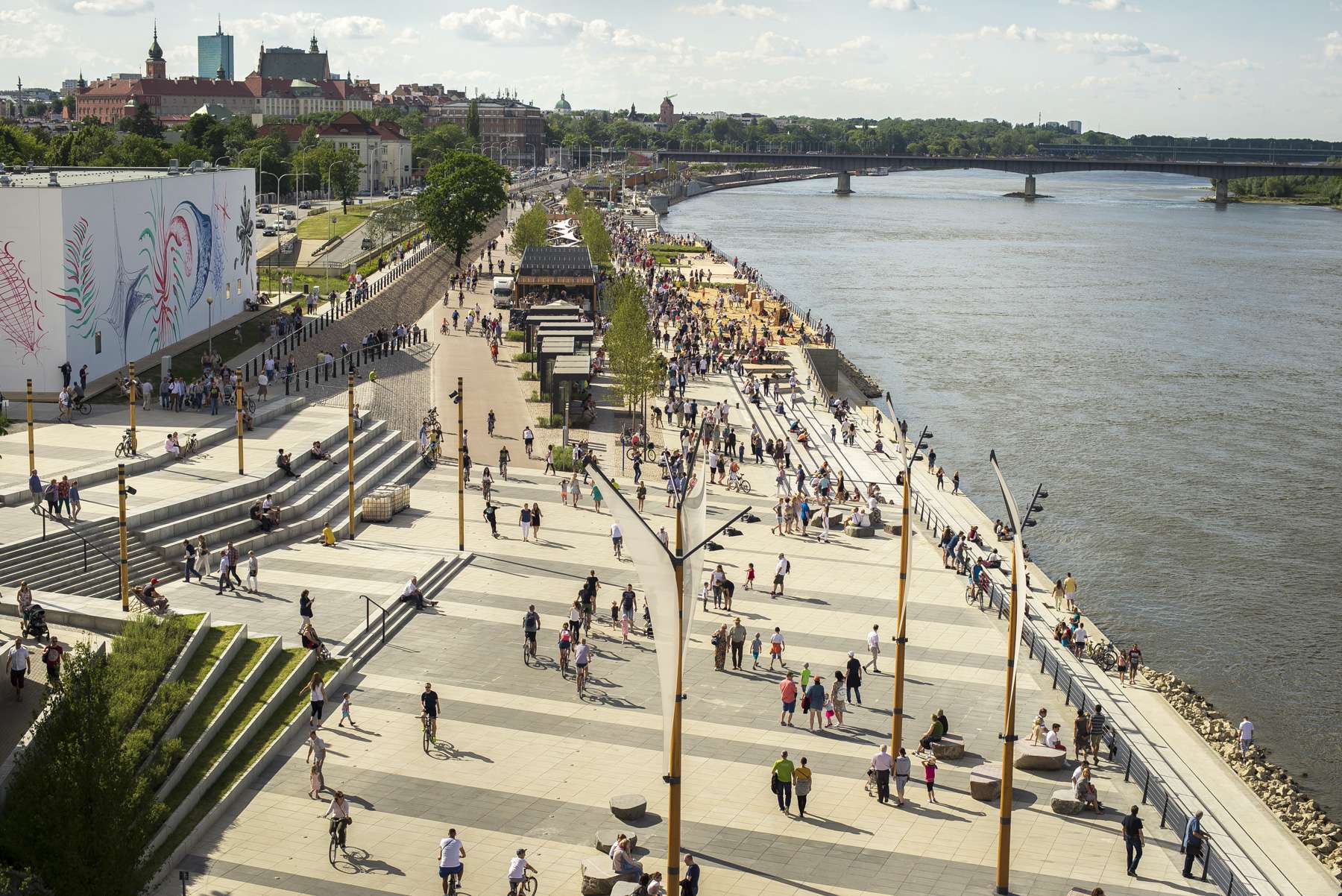 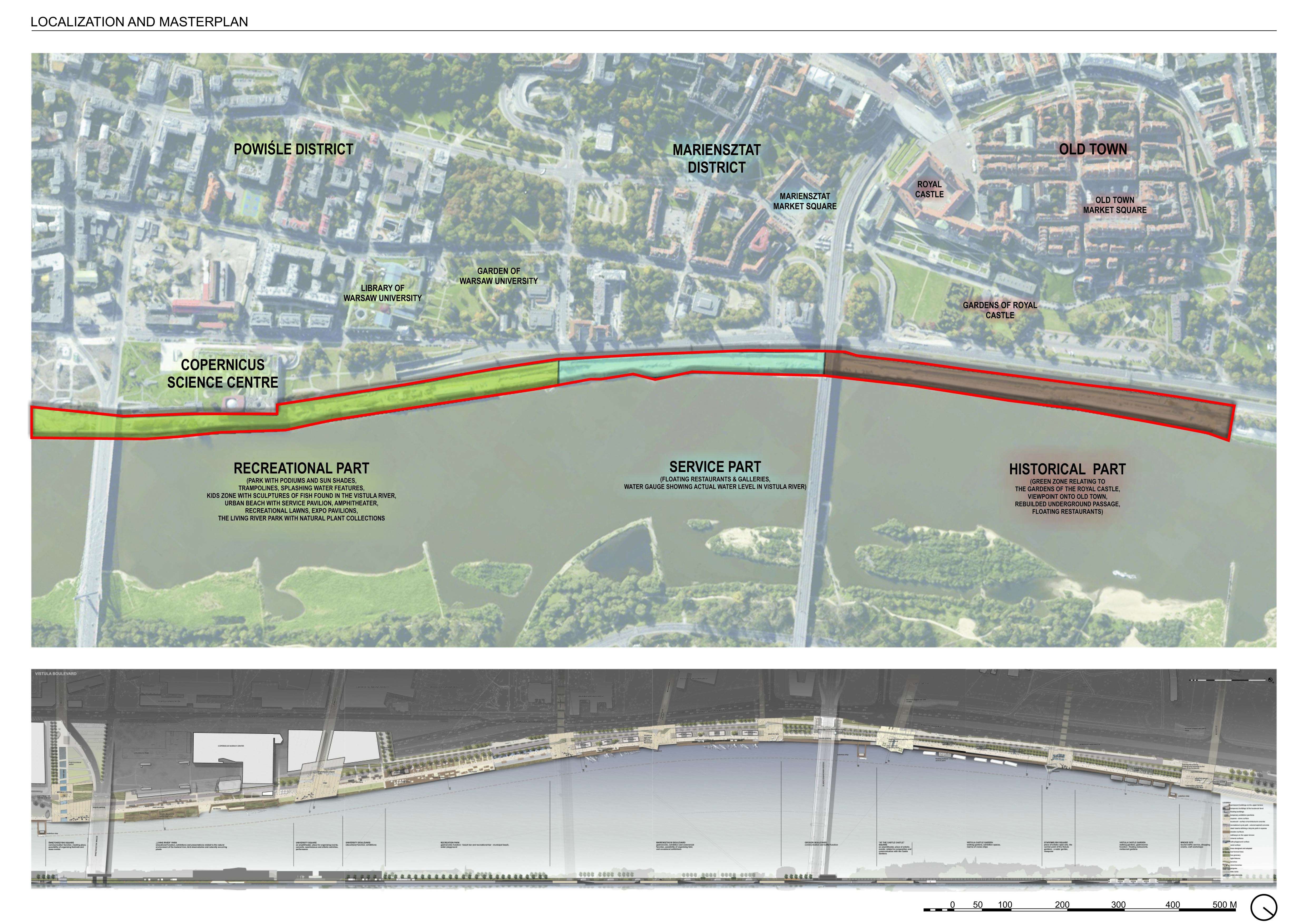 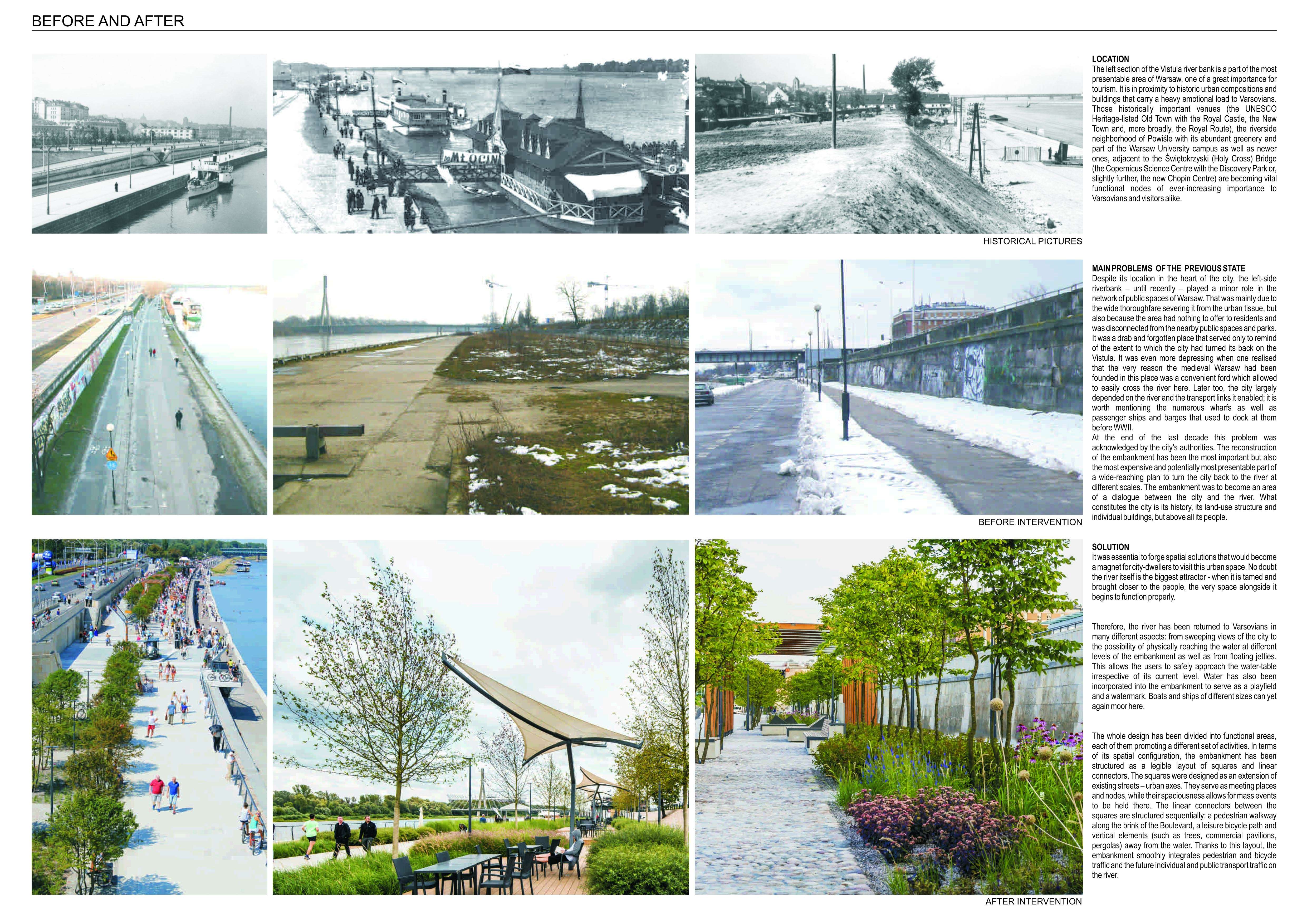 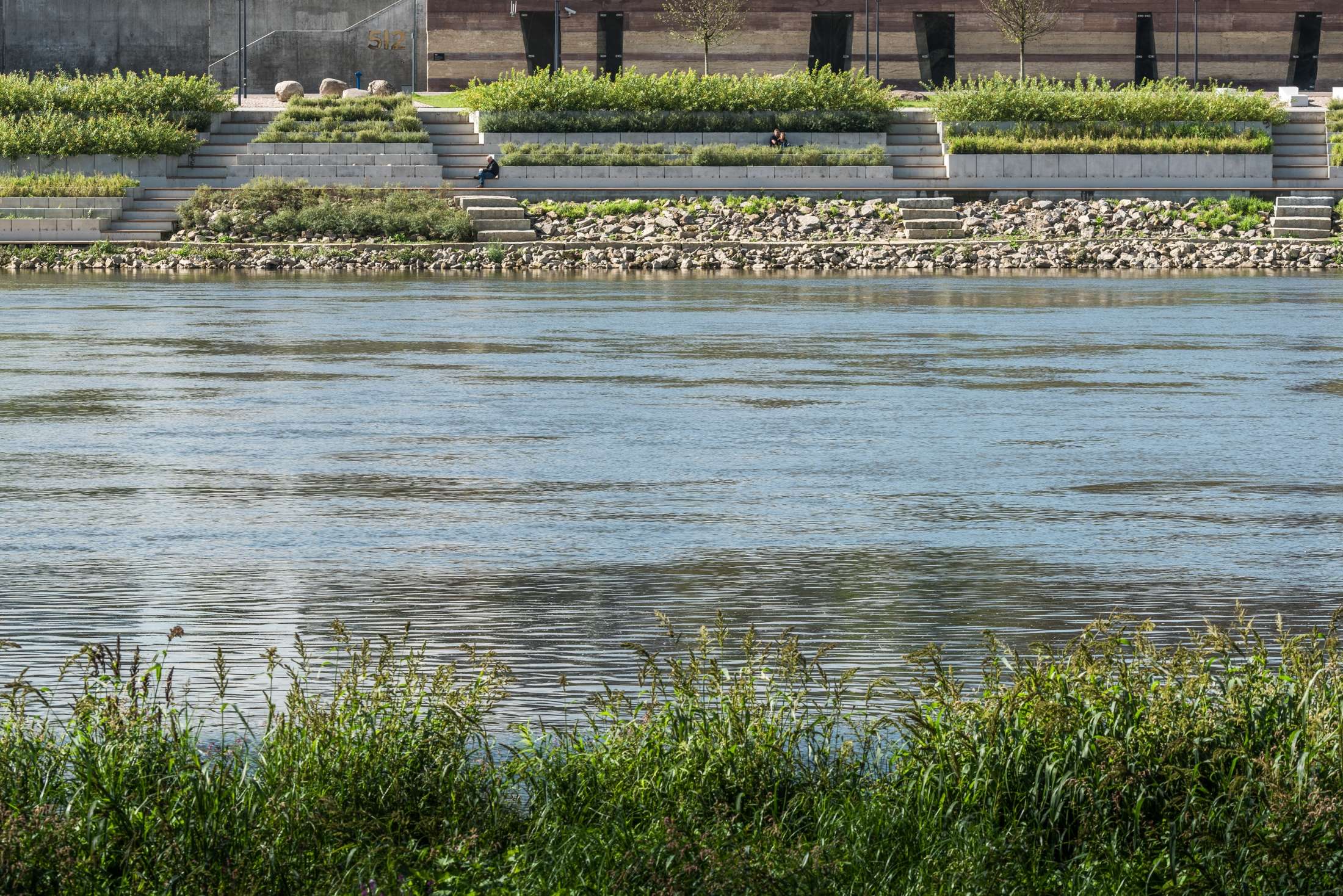 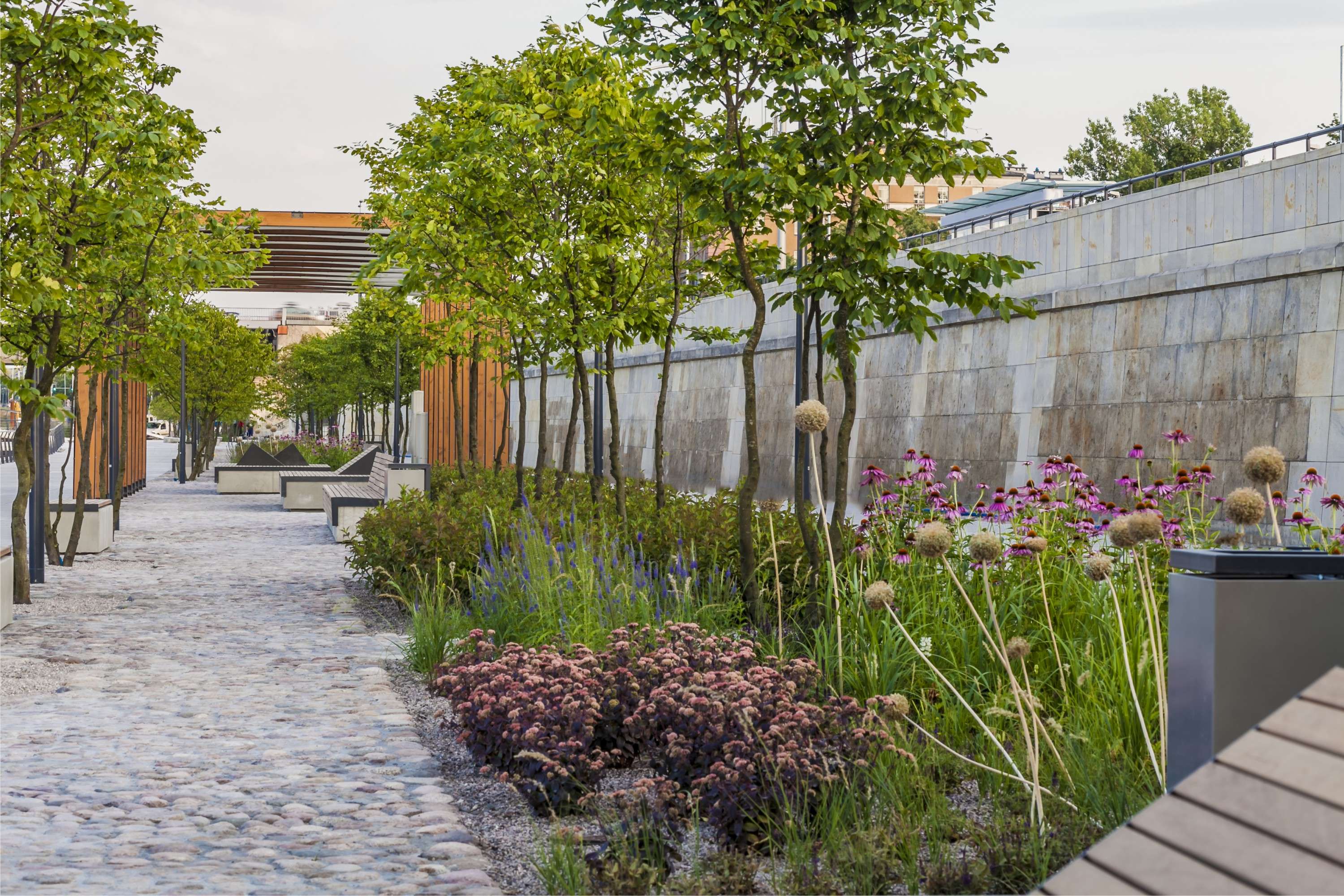 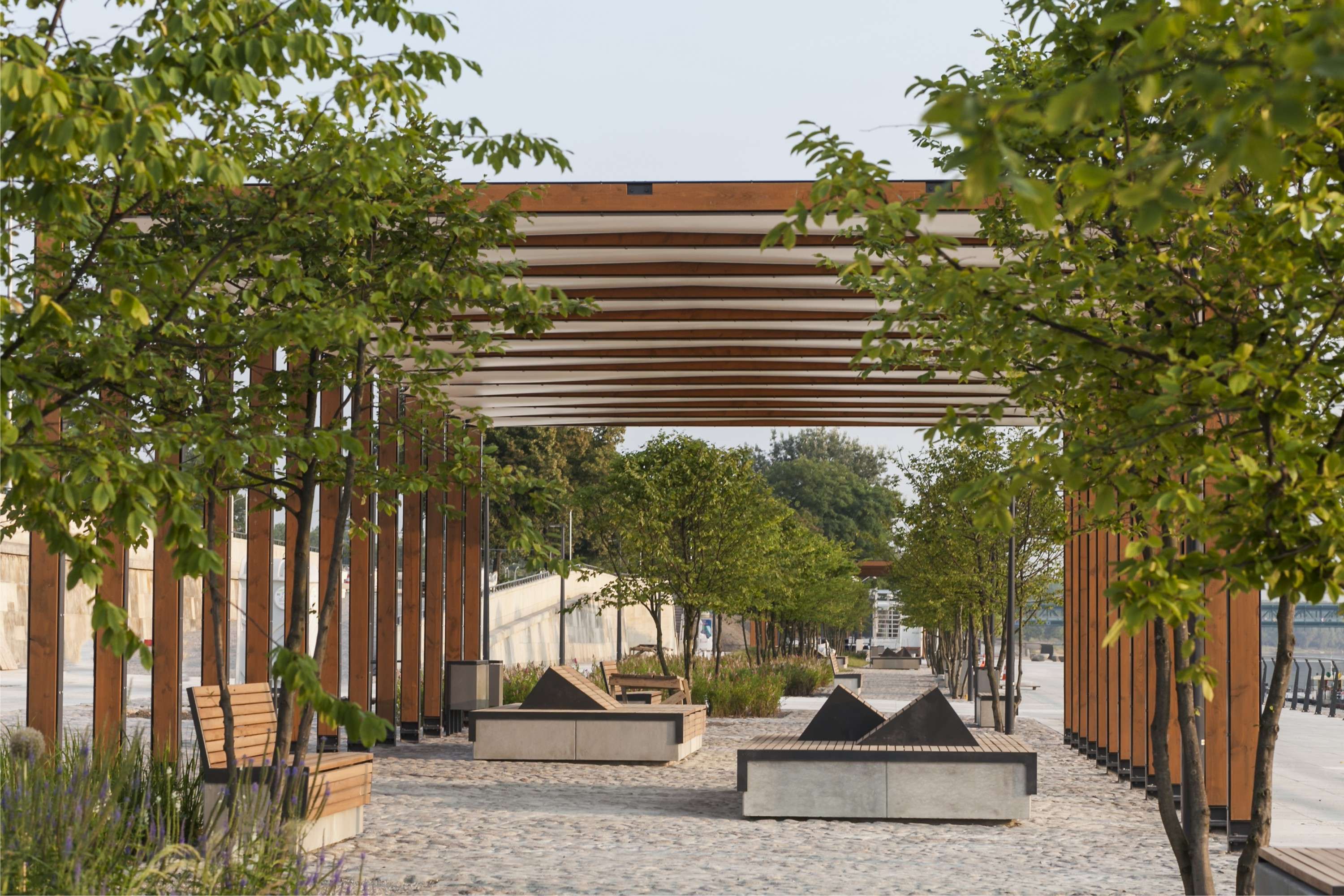 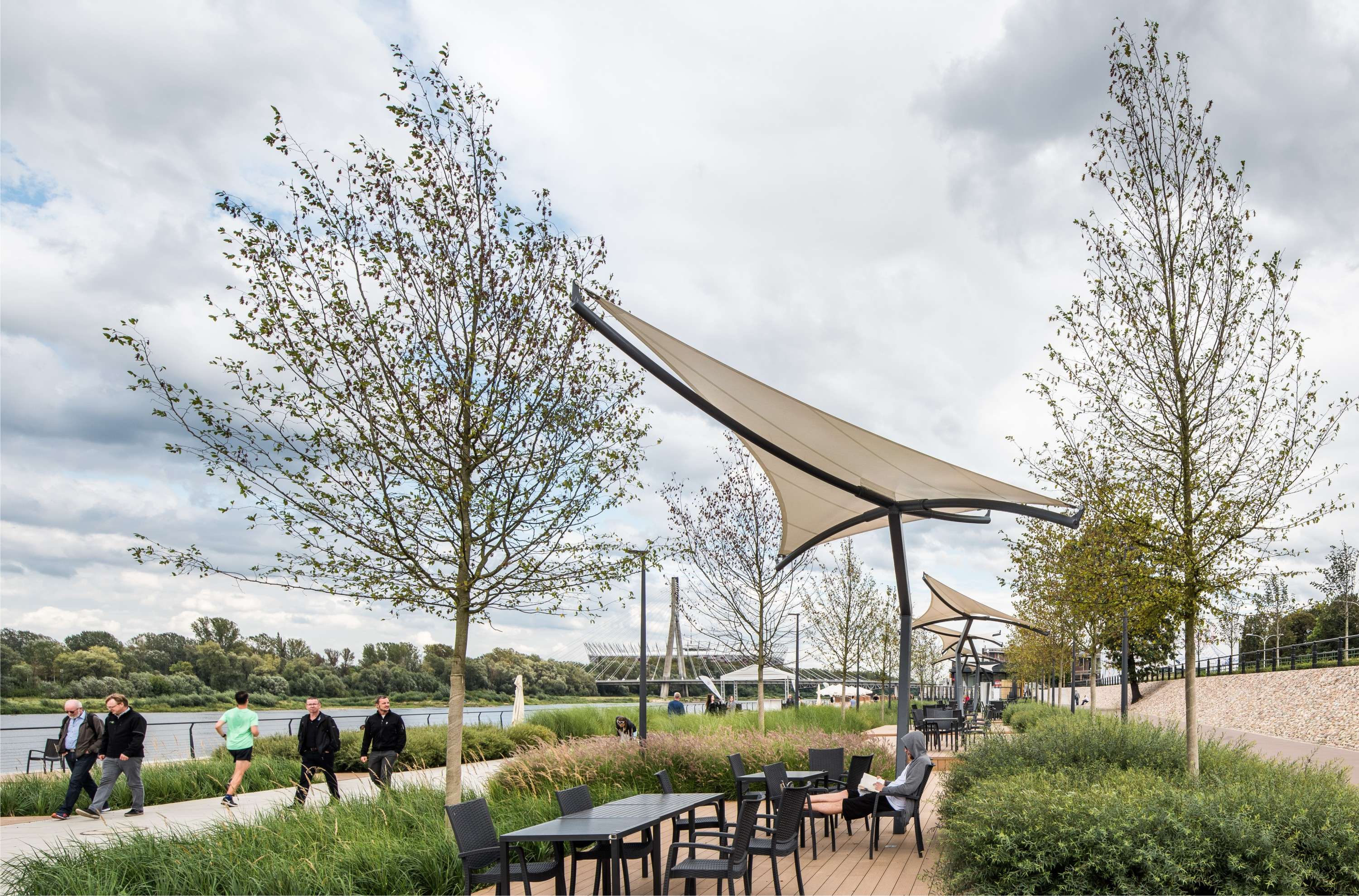 The left section of the Vistula river bank is a part of the most presentable area of Warsaw, one of a great importance for tourism. It is in proximity to historic urban compositions and buildings that carry a heavy emotional load to Varsovians. Those historically important venues (the UNESCO Heritage-listed Old Town with the Royal Castle, the New Town and, more broadly, the Royal Route), the riverside neighborhood of Powiśle with its abundant greenery and part of the Warsaw University campus as well as newer ones, adjacent to the Świętokrzyski (Holy Cross) Bridge (the Copernicus Science Centre with the Discovery Park or, slightly further, the new Chopin Centre) are becoming vital functional nodes of ever-increasing importance to Varsovians and visitors alike.

Despite its location in the heart of the city, the left-side riverbank – until recently – played a minor role in the network of public spaces of Warsaw. That was mainly due to the wide thoroughfare severing it from the urban tissue, but also because the area had nothing to offer to residents and was disconnected from the nearby public spaces and parks. It was a drab and forgotten place that served only to remind of the extent to which the city had turned its back on the Vistula. It was even more depressing when one realised that the very reason the medieval Warsaw had been founded in this place was a convenient ford which allowed to easily cross the river here. Later too, the city largely depended on the river and the transport links it enabled; it is worth mentioning the numerous wharfs as well as passenger ships and barges that used to dock at them before WWII.

At the end of the last decade this problem was acknowledged by the city's authorities. The reconstruction of the embankment has been the most important but also the most expensive and potentially most presentable part of a wide-reaching plan to turn the city back to the river at different scales. The embankment was to become an area of a dialogue between the city and the river. What constitutes the city is its history, its land-use structure and individual buildings, but above all its people.

It was essential to forge spatial solutions that would become a magnet for city-dwellers to visit this urban space. No doubt the river itself is the biggest attractor - when it is tamed and brought closer to the people, the very space alongside it begins to function properly.

Therefore, the river has been returned to Varsovians in many different aspects: from sweeping views of the city to the possibility of physically reaching the water at different levels of the embankment as well as from floating jetties. This allows the users to safely approach the water-table irrespective of its current level. Water has also been incorporated into the embankment to serve as a playfield anda watermark. Boats and ships of different sizes can yet again moor here.

The whole design has been divided into functional areas, each of them promoting a different set of activities. In terms of its spatial configuration, the embankment has been structured as a legible layout of squares and linear connectors. The squares were designed as an extension of existing streets – urban axes. They serve as meeting places and nodes, while their spaciousness allows for mass events to be held there. The linear connectors between the squares are structured sequentially:a pedestrian walkway along the brink of the Boulevard, a leisure bicycle path and vertical elements (such as trees, commercial pavilions, pergolas) away from the water. Thanks to this layout, the embankment smoothly integrates pedestrian and bicycle traffic and the future individual and public transport traffic on the river.

The section near the historic Old Town is modelled after the classic pedestrian embankment with mooring sites, accompanying greenery and recreational urban furniture, together with floating restaurants. Landscape design drawing inspiration from the Royal Castle gardens is a signature solution of this section.

A break from the mellow character of this section is a vantage point located at the extension of the Gnojna Góra hill vista of the Old Town, which guarantees beautiful views of the Old Town for passers-by. The structure stands on ‘Vistula Square’ that has the river’s course carved out in the floor’s stone, along with the silhouettes of major cities that are located on the river. This serves as a reminder of the key role as the country’s main thoroughfare that the Vistula has played throughout centuries. Due to the restrictions imposed by heritage conservation regulations (protected views), there are no fixed commercial stalls here. That function is instead fulfilled by floating restaurants which double as water-tram stops. It is worth mentioning the revamped pedestrian underpass below the wide thoroughfare dual carriageway that connects the Embankment to the Royal Castle gardens and the Kubicki Arcade’s axis.

The second section adjacent to the existing development of the Mariensztat neighbourhood is the location of an array of pavilions that will serve as restaurants, bars or selling points. They are situated on floating platforms that rise and fall depending on the current water-table level, including flood waves. An underpass has been put in the central part of this section. It connects the embankment to the Royal Route via Bednarska St. Here, at ‘Bednarski Square’, the Warsaw Watermark has been placed. It is a sculpture that indicates the current water level against the background of historic levels: floods and extreme droughts. This was conceived to make the public aware of the volatile nature of hydrological processes.

The third section, located in Powiśle, which mainly concentrates educational and recreational uses, is the heart of the entire design. This section has been equipped with numerous attractions that have become magnets for Varsovians and tourists of all backgrounds and ways of life. A park with wooden platforms, sunshades, trampolines, splash pads, kiddies’ zone with the sculptures of Vistula fish, urban beach with a commercial pavilion, amphitheatre, lawns for resting, exhibition pavilions and others have been designed here. The notable ‘living river park’ recreates the landscape of Vistulan floodplains that are represented by the steps of the Boulevard. Various plant communities specific to the floodplains of large Polish rivers are represented; from areas of alluvial deposits, to pioneer habitats, to riparian willow-dominated communities. The entire structure is easily accessible and safe irrespective of the water level. It is this section that is particularly popular with thousands of tourists and Varsovians alike who stroll here on every warm and sunny weekend.

Importantly, most of the Boulevard is exposed to regular flooding, occurring every few years. This fact was a vital influence on the design; from the ‘flowing layout’ of elements following the course of the river’s current, to a set of unique solutions for safeguarding the pavilions from flooding, to the selection of non-corrosive materials as well as the linear layout of tree planting, designed to allow water to flow freely. It was also necessary to consider the existing heritage structures, in particular the pre-war Starzyński Embankment. Moreover, one of the goals of the design team was to make the street furniture unique to this place. The entire furniture was designed specifically to be used here. This includes the lamps with sails, the mentioned fish sculptures and wooden elements for children, sitting areas styled to look like post-glacial rocks seemingly unearthed by the river’s current. Such design solutions are to build an even greater sense of place for this public space.

Despite the richness of the design elements, the team strived to ensure that the visual impressions would be as consistent and harmonious as possible. This was achieved through the use of basic materials and their economical application. Mostly concrete, natural and synthetic wood, post-glacial stone and achromatic steel elements were used. It is a space that does not impose any particular activities. It only moderates them. It does not constrain, only inspires. It’s also a space that allows local organisations to hold a variety of events.

The large attendance proves that the Vistula Boulevard has become one of the most significant urban spaces in Warsaw. It is viewed by the city’s inhabitants as one of the showcase spaces of Warsaw. It plays important environmental, social and political roles. It’s an open and sustainable space that attracts hundreds of tourists and Varsovians. This design tops all opinion polls about the best and most important public spaces in the city.

The Capital City of Warsaw

Warsaw waterfront on the distance from Boleść St. to Tamka St.